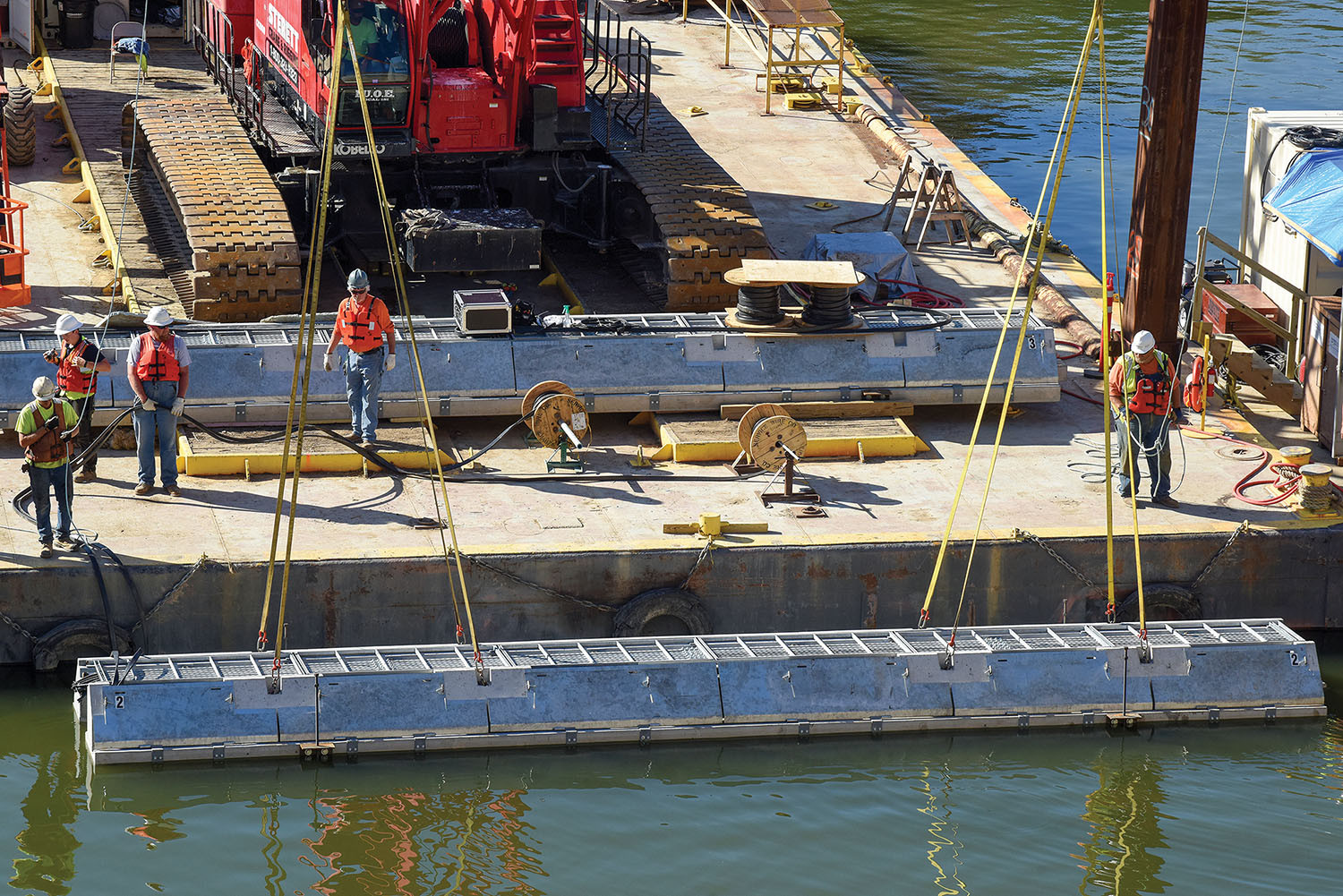 White flashing lights, low-level noises and a stream of bubbles are meant to frighten Asian carp, but they pose no danger to mariners, say installers of the new Bio-Acoustic Fish Fence (BAFF) at Barkley Lock.

“The primary structure is in place, and there are bubbles and sounds and lights that are coming out of the system, but they’re still installing some survey parts, and they’re still shoring up the primary elements that are in there,” Rob Simmonds, fish biologist with the U.S. Fish & Wildlife Service (USFWS) regional office in Bloomington, Minn., said last week.

USFWS turned on the fence October 21 on the downstream side of the lock in Grand Rivers, Ky. The U.S. Army Corps of Engineers ended navigation closures that were in conjunction with the construction October 30. The structure’s christening is scheduled for November 8, with U.S. Sen. Majority Leader Mitch McConnell, U.S. Rep. James Comer and other dignitaries in attendance, according to the Corps.

The fish fence is part of a three-year experiment in which biologists will track bighead silver carp fitted with transmitters to see if the BAFF limits their passage from the Cumberland River into Barkley Lake.

Because of where the BAFF is installed, it should not create any navigational challenges, Simmonds said.

“We installed it so that it’s below the level of a lock sill and put it into concrete housing,” he said.

No part of the system will protrude out, he said.

Still, Simmonds recommended that boats should be careful about not exceeding their draft and that they communicate clearly with the lockmaster.

David Lambert, project manager with Fish Guidance Systems, the contractor installing the BAFF system, previously told the Corps that divers worked to remove silt from the riverbed, and his team then lowered the sections into a trench in bedrock on the river bottom. From there, crews made sure electrical lines and air hoses were installed and operating as designed.

What mariners will notice in approaching the lock may depend on the time of day and the weather conditions. One of the first signs something has changed may be the appearance of bubbles.

“There will be a row of bubbles at a diagonal that you’ll notice as you’re approaching,” Simmonds said. “It won’t be like a pot of boiling water. It would be more of a stream of bubbles just kind of making their way along the surface.”

The Corps said the most common observances will be:

• flashing white lights at night, particularly when water levels are low (the rate of flash is slow and below the threshold for anyone with photosensitive epilepsy);

• a line of bubbles running the width of the channel from the main guide wall to the opposing bullnose;

• vibration, particularly noticeable to small craft, from the bubble curtain; and

• noise from the sound barrier itself heard through the hull of the vessel as well as on deck. The noise level does not pose a hazard.

The BAFF had originally been scheduled for completion in August, but wet weather caused high water earlier in the year that delayed installation of the in-river portion of the structure, Simmonds said. Nashville District Project Manager Jill Kelley said the Corps delayed deployment of the BAFF during the months of August and September to accommodate navigation traffic during a required maintenance closure at neighboring Kentucky Lock on the Tennessee River.

The project cost roughly $7 million and was funded through the Great Lakes Restoration Initiative through the Asian Carp Regional Coordinating Committee’s Asian Carp Action Plan and leveraged with support from USFWS base funding. The project involves multiple agencies and partners, including USFWS, the Nashville Engineer District, the Kentucky Fish & Wildlife Service, the U.S. Geological Survey and the Tennessee Wildlife Resources Agency.

Simmonds said team members hope the fence will work better than currently employed methods to deter the carp. Ultimately, he said, such systems may be able to prevent the further spread of the invasive species, including keeping them out of the Great Lakes. Fisheries managers on the West Coast of the United States use a similar system to guide the movement of trout and salmon, according to the Corps.

“As soon as we can get some answers, we’ll have a lot of people looking to apply the same technology, if it’s successful, in other locations,” he said.