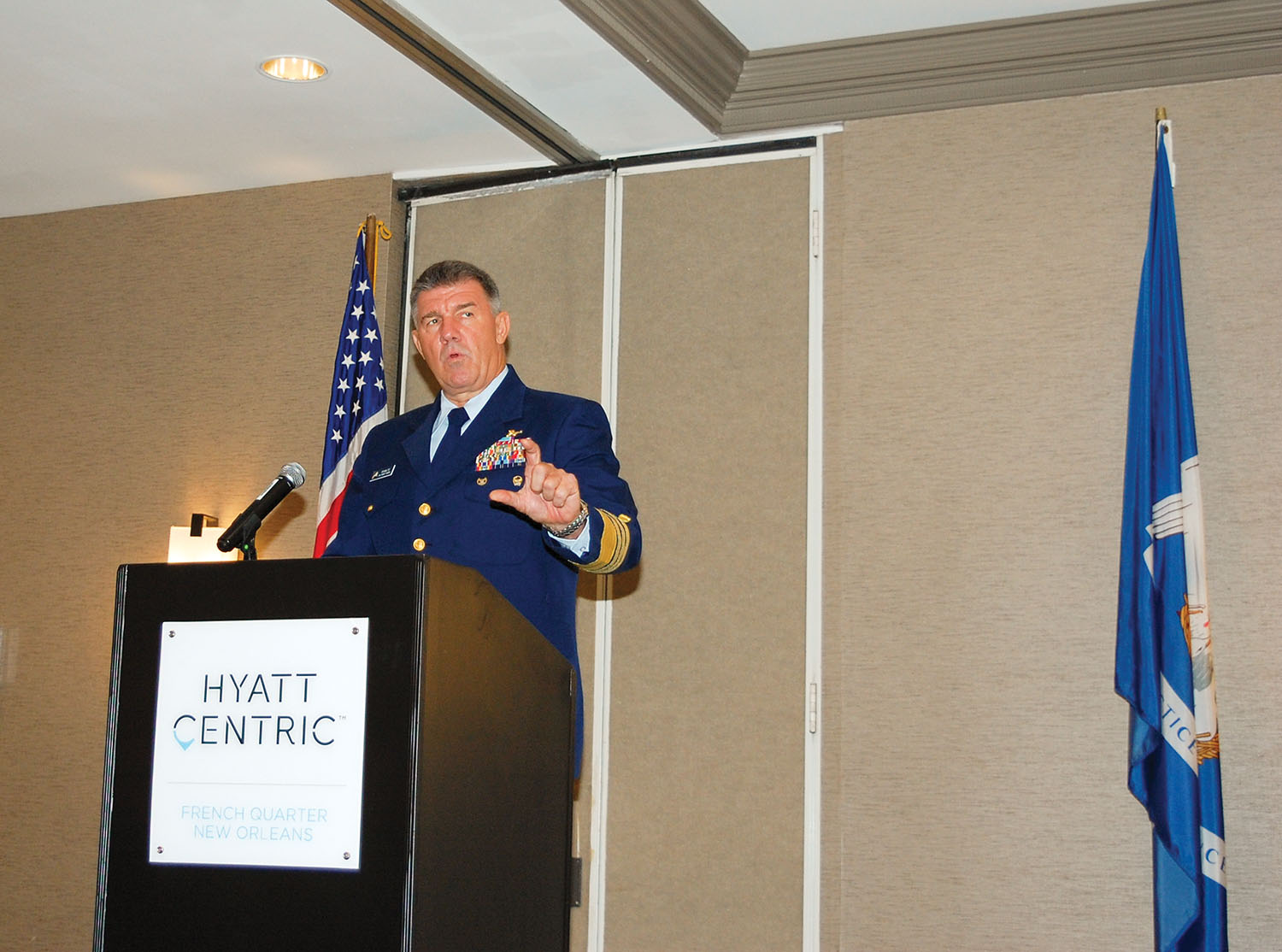 The convention, held in New Orleans, La., used the phrase as its theme for the three-day conference, and speakers kept the future firmly in mind. Ken Wheeler, a Paducah resident, retired inland waterways executive and past president of the International Propeller Club, attended and summarized the event for The Waterways Journal.

Adm. Karl Schultz, commandant of the U.S. Coast Guard, spoke in his keynote address October 16 about the need to develop a northern (arctic) maritime route, which will require the United States to have six icebreaker ships.

“Today, we only have one,” Schultz told the crowd.

Shultz noted that Russia and China both have a head start in developing the northern trade route, and that the United States must catch up.

U.S. Navy Rear Adm. (Ret.) Mark Buzby, maritime administrator, gave the second keynote address October 17, focusing his remarks on the need for adequate management of the National Defense Reserve Fleet, the U.S. Maritime Administration’s fleet of vessels designed to provide a reserve of ships that can be activated in a national emergency and used to transport personnel and equipment. Buzby noted the fleet currently consists of 46 vessels with an average age of 44 years.

In discussing future ports, Wheeler said the discussion focused primarily on coastal ports, but did include the impact on inland transportation as well. An example was at the Port of Virginia, which saw a 97 percent decrease in soybean exports this year due primarily to tariff issues, Wheeler said. Panelists noted that South American soybean exports had filled the gap this year, and might continue to do so.

The discussion of future fuels focused on the deadline for enactment of IMO 2020 with the January 2020 sulfur cap on marine fuel as one of the factors driving the rapidly growing use of liquified natural gas (LNG) and other alternative sources of propulsion within the marine industry.

“Panelists emphasized the many challenges that maritime facilities and vessels face in making this conversion,” Wheeler said.

In discussing future crews, the panel expressed concern with the potential shortage in crew members through 2040 and beyond and focused on how to overcome that shortfall. Panelists discussed the need for promoting and encouraging entrance into the maritime industry beginning with high school recruitment efforts. Wheeler noted that Paducah, Ky., already has one program of the type industry officials suggested, its Naval Jr. Reserved Officer Training Corps (ROTC) program at Paducah Tilghman High School.

“That’s a great example of how that has worked here,” he said.

The panel on infrastructure and navigation took a look at the impact of high water on the Mississippi River and on coastal ports this year, noting that the Port of New Orleans operated under flood conditions for nearly 10 months, the longest flood in New Orleans history. The conditions forced opening spillways, including opening the Bonnet Carré spillway to adjacent Lake Pontchartrain twice in one year for the first time.

The International Propeller Club also looked to its own future with the decision to employ a consultant to develop a strategic plan to map out the organization’s next five to 10 years.

“I think it really is a significant achievement,” Wheeler said. “First of all, it has not been done in a long time, and second of all, it will really bring to the forefront the value of the International Propeller Club to the maritime industry.”

The 2020 International Propeller Club’s international convention and conference is scheduled for next fall in Piraeus, Greece. An exact date has not been finalized.