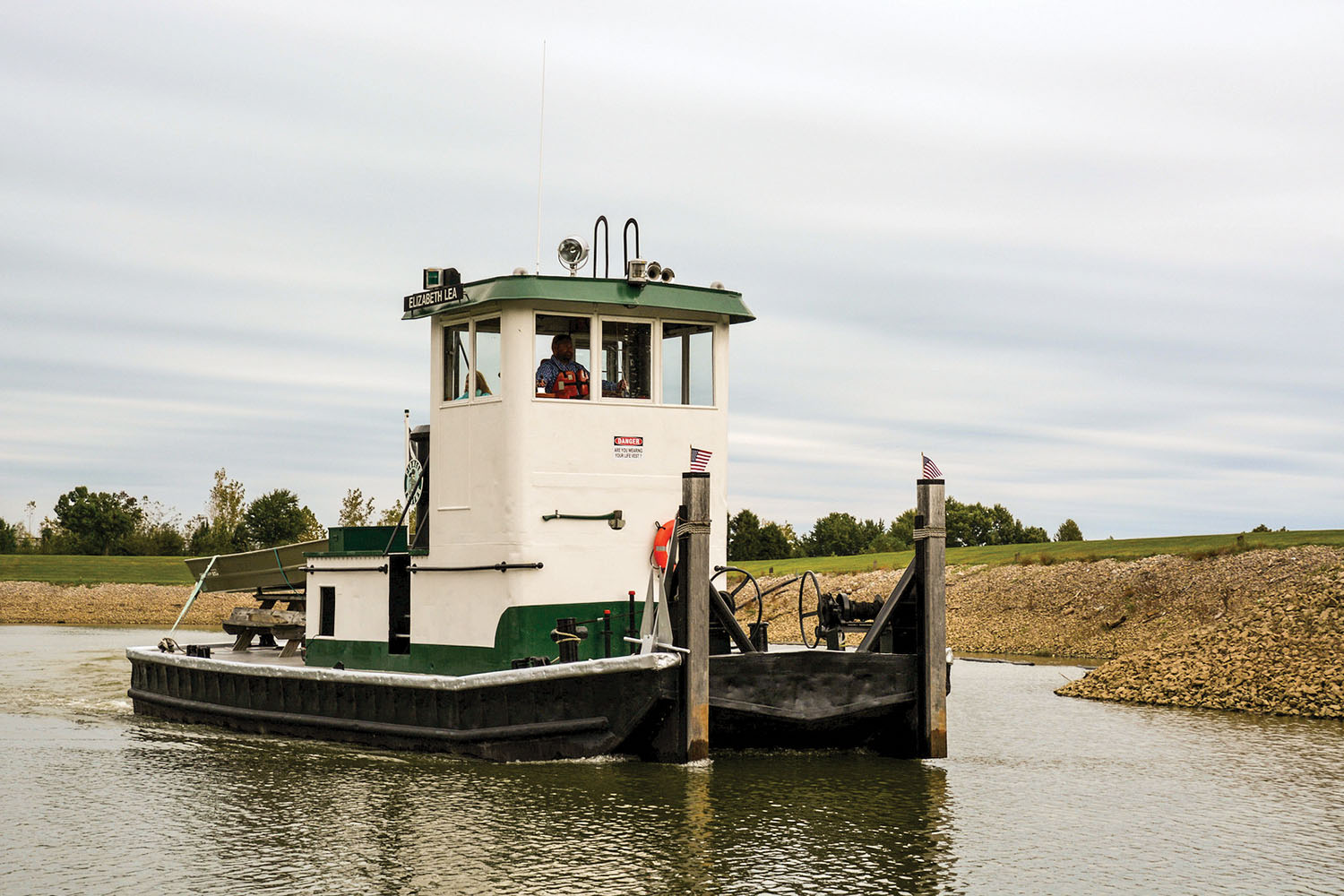 It all began with an ad for a free boat in The Waterways Journal.

How right he was.

The welded steel hull tug turned out to have a massive hole in its bottom. It cost $1,600, including a $400 over weight limit fee, to bring it over land to Cincinnati, Ohio, in 2005. It also took 10 years for Richardson’s son, Aaron, and several friends and family members to restore the boat to its former glory.

Along the way, they uncovered the history of a boat so unique that the Elizabeth Lea, now with a home port of Aurora, Ind., was listed on the Indiana Register of Historic Sites and Structures in April. In June, the boat was accepted to the National Register of Historic Places by the U.S. Department of the Interior.

The Richardsons also developed plans to pilot the boat up and down the rivers as a historic museum boat. Paul Richardson now finds himself at the head of a non-profit as president of the Towboat Elizabeth Lea Preservation Society, while Aaron is officially listed as the boat’s owner and restorer.

“We kind of discovered things as we were fixing it up,” Richardson said.

It turns out the boat, manufactured in 1939 in Bayport, Minn., by St. Croix Shipbuilders, is the last remaining of three identical dredge tenders used for 60 years to dredge the Upper Mississippi River, maintaining a deeper channel for increased commerce and transportation from 1939 to 1989. They were used in conjunction with the dredge William A. Thompson. As newer equipment came online in the early 1990s, the boat was replaced and put up for auction.

Originally named the Joseph Throckmorton, the boat is an early example of all-steel welded hull construction. It has a unique tunnel hull design. As explained in the historic register nomination, the design is created by bending the hull plate to match the framing inside the hull. It was utilized to improve the flow of water directly into the propeller for increased thrust. Tunnel designs date to the late 1800s on steam-powered vessels, but they were not employed on all-steel welded, diesel-powered towboats in the United States until 1931. An example of another tunnel hull vessel is the Missouri River towboat H.T. Pott, which is on display, but out of the water, at the National Museum of Transportation, in Kirkwood, Mo.

The boat also played a role in saving lives during the infamous Armistice Day storm of November 11, 1940, when a surprise blizzard hit the Great Lakes region.

The story as told on the historic boat’s website at towboatelizabethleapreservationsociety.org is this: “The day started with blue skies and mild temperatures. With businesses and schools closed in observance of Armistice Day, duck hunters hurried to sites along the Mississippi. The storm’s sudden high winds, heavy snow, and six-foot waves stranded hundreds of hunters, with their small skiffs and outboard motors, on islands up and down the river.

“The crew of the Joseph Throckmorton, docked for the season at Fountain City, Wis., sprang into action to help rescue efforts. In a storm that killed more than 150 people, the tow ran multiple trips to rescue marooned hunters.”

Since buying the boat in 2004, the Richardson family has spent hundreds of man-hours and about $65,000 restoring it to its appearance from the 1950s, with the exception of trading its U.S. Army Corps of Engineers paint scheme to black, white, gray and silver for museum boat life. Four generations of the family, including Paul’s father, James Richardson, a U.S. Navy veteran of World War II, helped with the work, which ultimately included replacing hull plate, scraping, painting, cleaning, repairing, and re-engineering the mechanicals.

“I call it a family affair,” Richardson said. “It’s been wonderful for our family.”

In 2014, the Richardsons re-launched the boat as the mv. Elizabeth Lea, combining Aaron Richardson’s wife’s and mother’s middle names.

“We’ve been going up and down the river to different river festivals,” Richardson said. “Our mission statement is to educate people about the inland waterways and how important they are and also about the era of the ’39, the steel-hulled boats.”

The all-volunteer crew, mostly composed of family members, also talks about safety, reminding recreational boaters about the importance of keeping a safe distance from towboats and barges.

They also promote the importance of wearing personal floatation devices, especially for children.

Recently, the Elizabeth Lea was pulled from the water for its government-required five-year antique boat inspection. It needs hull repairs and possibly also some engine work.

“A lot of the people are getting old, and it’s hard to find someone who knows how to work on these old boats,” Richardson said.

As repair and ongoing maintenance costs have continued to increase with the vessel’s age, the Richardsons created the not-for-profit Elizabeth Lea Preservation Society and obtained their 503(c)(3)  status earlier this month to accept tax-free donations to help fund the Elizabeth Lea’s continued voyages. They are sending letters out to river-related industries to ask for help, soliciting sponsorships for the $5,000 annual operating budget to continue the boat’s mission, as well as donations for engine rebuilding or replacement and to replace different sections of the hull on a rolling, five-year basis to keep the Elizabeth Lea sound and allow farther journeys from its home port.

As the letter says, “Our goal is to raise awareness of not only our boat’s history but the vital role the inland waterways play on our past, present, and future. Without the support of the industry, we will not accomplish this goal and the boat may very well be lost.”

Richardson said the plan is to offer tours to the public at various river towns and festivals. Eventually, he said, he would like to obtain a floating dock or barge the boat can push and also use for providing safe access for the public and as a tour staging area.

“We would like to incorporate displays, relics and photos of the boat and the river system on board the dock/barge for further educational opportunities for the general public,” the boat’s website explains.

With help, Richardson said, he sees no reason why the Elizabeth Lea can’t continue its legacy of working on the river.