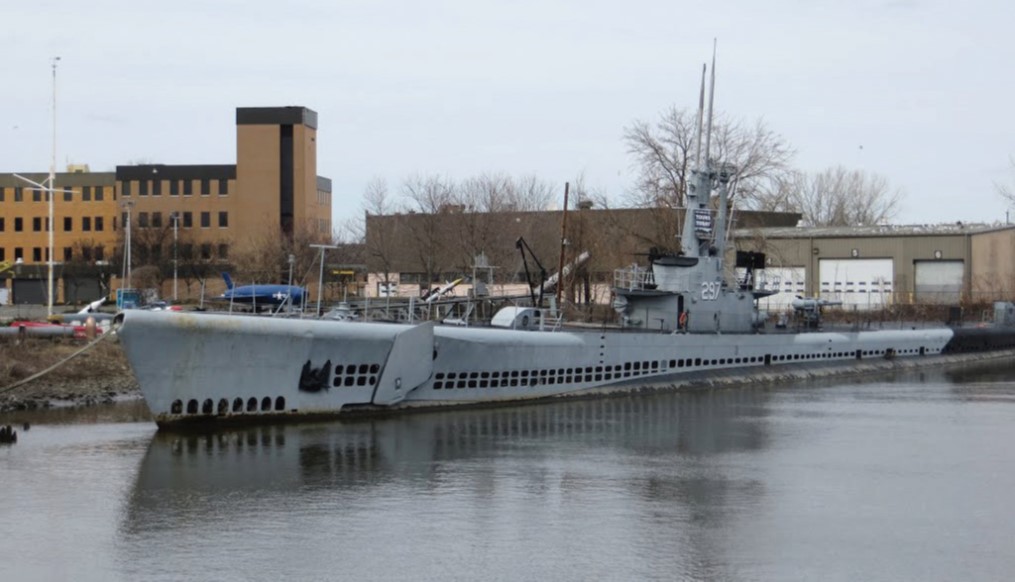 When Lewis Palmer responded to a “Free To A Good Home” post on the internet, he wasn’t agreeing to bring home a pet.

“It’s a submarine that’s stuck in the mud in the Hackensack River,” said Palmer, 50, of Scottsburg, Ind.

Palmer and his friend and fellow veteran Mark Gatton of Louisville are the forces behind the new non-profit Louisville Naval Museum Inc., with plans to transport the U.S.S. Ling to Louisville and dock it along the Ohio River as the centerpiece for a World War II-era museum.

The Ling is a 312-foot-long, Balao-class diesel-electric submarine. It was laid down in 1942 by the Cramp Shipbuilding Company of Philadelphia, Pa., and launched in 1943. The Ling was commissioned in June 1945. When the war ended, it was used as a training submarine. It was struck from the Naval Register in 1971. Since 1972, it has served as a museum ship at the New Jersey Naval Museum in Hackensack, N.J., but the museum closed after damage from Hurricane Sandy in 2012, and flooded in later years after a rusted hole developed in the side of its pressure hull.

The ship is owned by the now-defunct Submarine Memorial Association, a group of elderly veterans without the means to care for it since the museum’s closure.

“She’s stuck in the mud, to put it directly,” Palmer said. “There’s about 10 feet of hull underneath the waterline, and there’s so much silt built up over the years that she’s very securely stuck.”

Palmer and Gatton are intent on making sure the Ling doesn’t stay that way. Palmer admits it’s a lot to take on for someone who started out with no knowledge of how to get a partially sunken submarine to float and bring it from New Jersey to Kentucky. So far, the group has a Facebook group titled Save the U.S.S. Ling, about $2,000 in the bank and a donated $10,000 welder. They estimate they will need $10 million to $15 million.

“I didn’t have a major donor in my pocket and still don’t,” Palmer said. “The only thing I had was a love for those submarines from my Grandpa. He served on three of them during World War II. I wanted to do what I could partially for his memory and because of how he felt about them.”

In the months since obtaining permission to go on board and perform maintenance, he and other volunteers, including sailors from a Connecticut naval base, managed to patch the Ling’s hole at low tide, allowing all but 2 to 3 feet of water on the inside deck to flow out. If they can find a way to get the submarine down the Hackensack River to the Atlantic Ocean and then down the Eastern Seaboard and into the Gulf of Mexico, a towboat company has agreed to tow it from the mouth of the Mississippi to Jeffersonville, Ind., at cost, roughly $400,000.

Plans call for using airbags down the Hackensack and removing as much weight as possible to lighten the Ling’s draft from more than 15 feet to about 12 feet to allow the sub to traverse the shallower Ohio River, along with dredging as needed, Palmer said. The nonprofit has also received permission to moor the submarine at the former Jeffersonville Boat & Machine Company, commonly known as Jeffboat, shipyard during rehabilitation, as long as volunteers do the maintenance necessary to allow it to dock.

“It’s going to be the longest ‘dead tow’ is what they call it on a museum ship,” Palmer said. “Go big or go home is what I’ve been telling people.”

Along with plans to solicit river-related companies for tax-exempt donations, the group also plans a series of fundraisers. The first is U.S.S. Ling Mess Night, a formal dinner with 1940s era band January 25 at Veterans of Foreign Wars Post 6182, 992 Longfield Ave. in Louisville. Palmer said raffles and a silent auction will also accompany the $25 a plate dinner, and Sea Scouts and a group of Naval Junior ROTC cadets will serve the meal.

In Palmer’s mind, he can already see the Ling set up to serve as a memorial to the 52 submarines lost in World War II. Eventually it could be surrounded by period buildings and vehicles.
“It will tug at your heartstrings,” Palmer said.