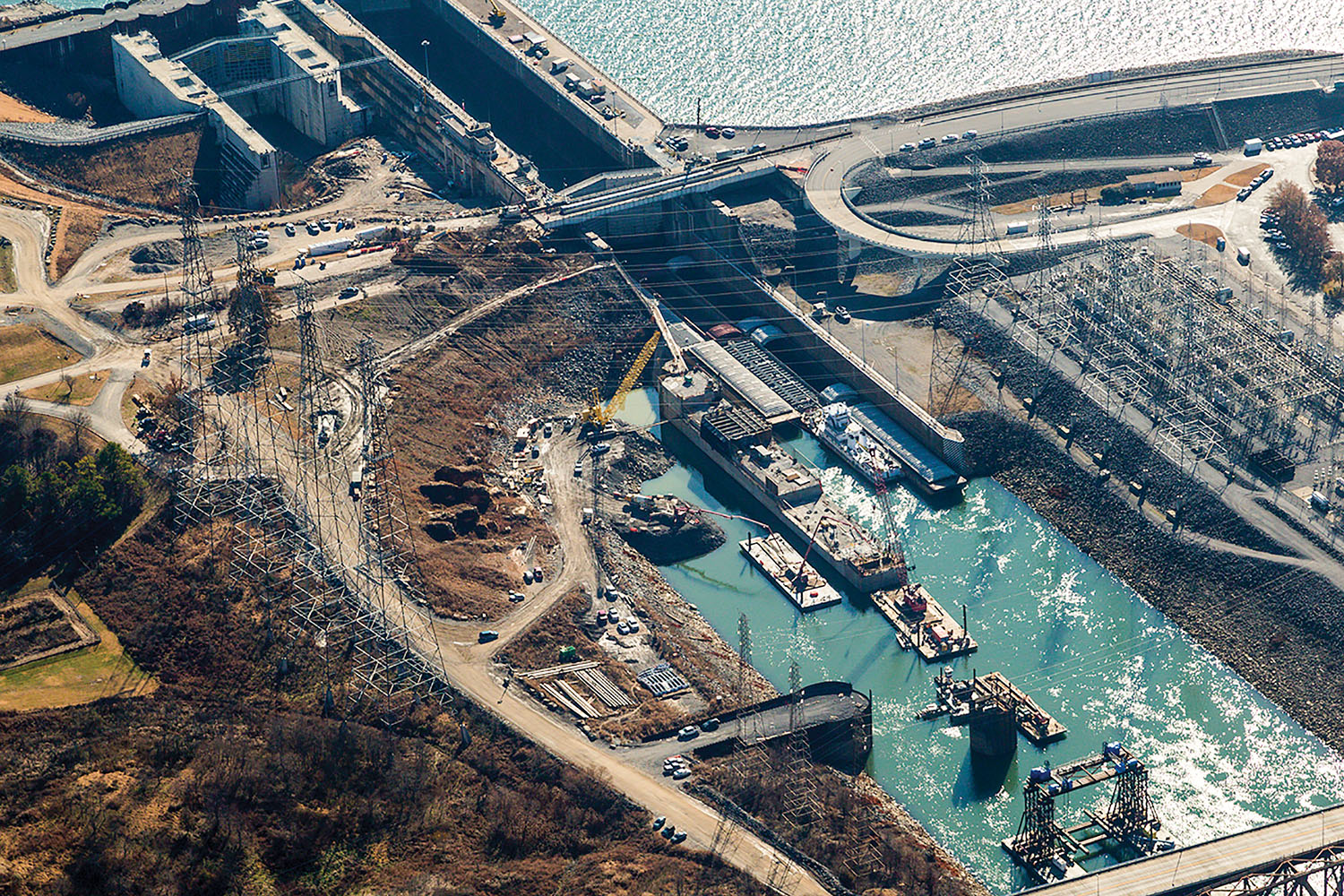 High water along the Tennessee River has delayed the placement of the 10th and final concrete shell for the Kentucky Lock addition project in Grand Rivers, Ky.

The 10th shell was originally projected to be lifted into place in December, following the placement of the ninth shell November 9. Now it will likely be sometime next month, said Don Getty, project manager for the U.S. Army Corps of Engineers’ Nashville District in Nashville, Tenn.

“We just couldn’t place it,” Getty said. “The water came up in the last half of December. It’s been up since then, so it’s definitely been slowing us down. It’s probably going to be early February before Mother Nature is going to let us place it.”

Once placed and sealed, “tremie” concrete is pumped inside the shells via an underwater pipe and allowed to cure. Because the wall of concrete shells is considered a critical-path item for both the contract and the project, every day delayed placing it means a day later before the project is completed. The work cannot be made up with time-saving means because of its nature.

“It’s just like when you build a house,” Getty said. “You can’t build the roof before you build the foundation. There is a sequence of work that has to happen, and this last, 10th shell is on that critical sequence list.”

Once the concrete shells are placed, contracted workers can turn their focus to the construction and placement of four circular sheet-pile cells, which should extend into the late spring or early summer.

“We’ve finished one, but we can’t build the other three until this concrete shell is in place,” Getty said.

Once the river goes down, the existing lock at Kentucky Dam will have to close 18 hours while the concrete shell is set, Getty said. There will also be some 12-hour closures afterward to allow sandbagging by divers, but those are contingent on having a small queue waiting to lock through. If nine boats or more are waiting, the closure is delayed.

Getty also anticipated the Corps using two helper boats for the first week and a half to two weeks after the setting of the shell because of it being in a vulnerable position.

“Since about our third shell we have reduced the efficiency of locking at our existing lock, but we don’t envision impacting it any more than we already have,” he said, adding that the Corps will continue to minimize impacts as much as possible to the existing lock’s operations.

The $1.2 billion project is adding a 1,200-foot additional lock at Kentucky Dam, which is currently served by a 600-foot lock. Heavy Tennessee River traffic and the limited size of the existing lock has meant commercial tows wait eight to 10 hours or more to lock through, creating one of the worst bottlenecks in the navigable inland waterway system.

The downstream cofferdam had been scheduled to be completed in August 2020.

“That’s going to get pushed back, but how much depends on how long we have high water,” Getty reiterated.

Once the shells are all in place, Getty said the Corps will be in the “home stretch” of the cofferdam contract. A contractor for the excavation of the remainder of the new lock is already at work.

“He’s actively working to stabilize the existing lock wall because we are excavating and undermining that wall, so we have to take extra measures until we get the new concrete wall installed,” Getty said.

The excavation contractor expects to begin limited rock removal for the new chamber by early spring, involving both drilling and blasting, Getty said. Fortunately, he said, that should have minimal impact on neighbors because of the lock and dam’s rural setting.

“The geology of the site has always been a consistent technical challenge for us,” Getty said, noting that the karstic limestone is a very irregular type of rock, filled with voids and crevices of various sizes.

“Those are impossible to predict, generally,” he said. “We sometimes find them in exploratory drilling.”

Following the completion of those two contracts, the Corps anticipates awarding a contract of more than $250 million in September to construct the downstream lock monoliths. It will take about 400,000 cubic yards of concrete to build the 50 remaining monoliths, large blocks of concrete that form a continuous wall.

Getty estimated the lock addition project is about 40 percent complete. He projected the project will be finished in 2024 as long as it continues to receive efficient federal funding. The efficient funding level was received the last three years, so Getty hopes the trend will continue. He is also waiting for the Corps’ Fiscal Year 2020 Work Plan. If the project were to receive any significant cuts to its fiscal year 2020 efficient funding level of $66 million, Getty said, it would likely not be possible to award the lock monolith construction contract on time.