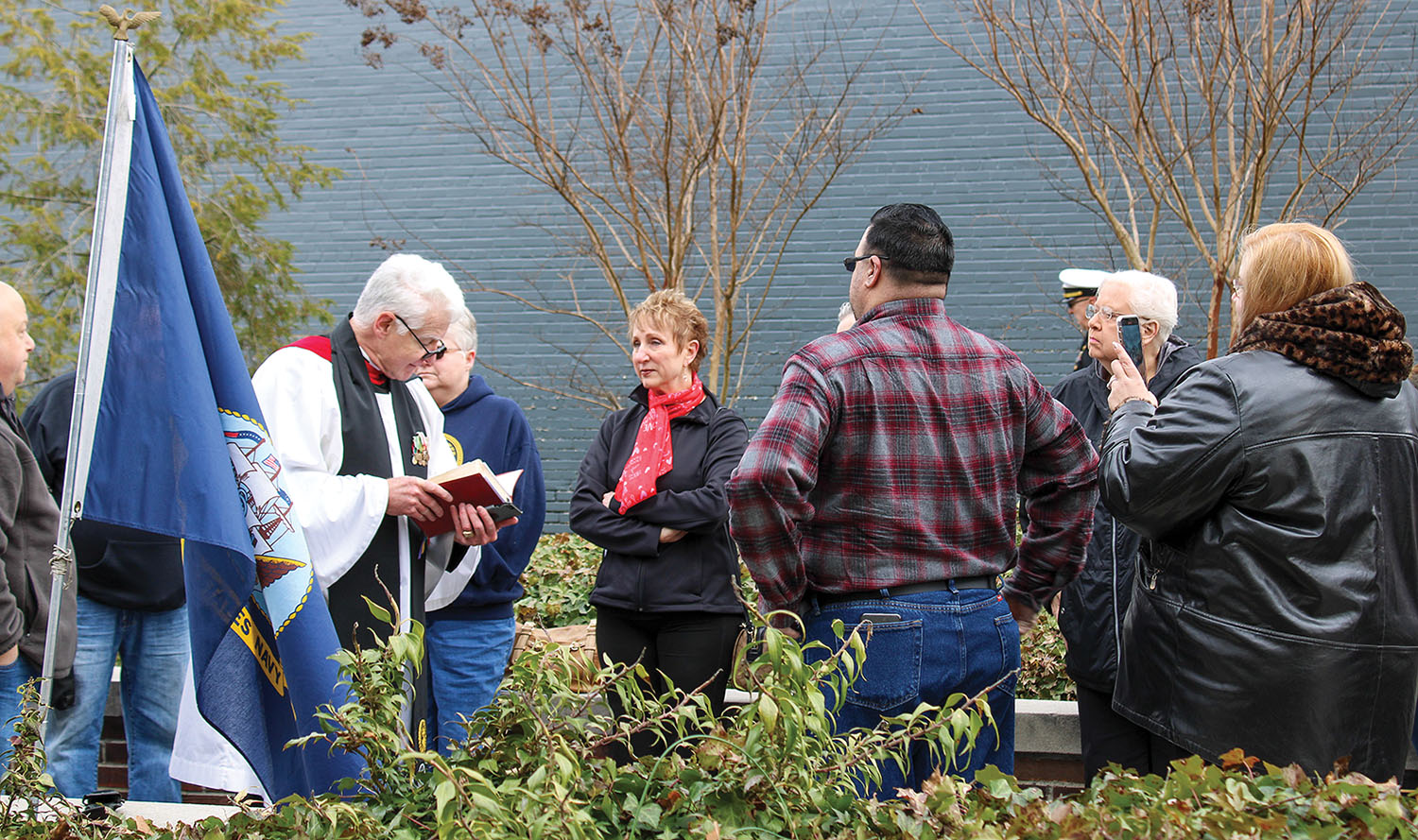 With a complete disregard for his own personal safety, Gunner’s Mate 3rd Class Harry James Loe Jr. kept firing at an oncoming Japanese kamikaze plane, saving his ship and losing his life in 1942, according to his Naval citation.

The next year, the U.S. Navy named the destroyer escort U.S.S. Lowe after him, spelling it the way they had it recorded in the Navy rolls. Then, except by his parents and his eight brothers and sisters, Loe, of Paducah, Ky., was mostly forgotten.

Now, due to the efforts of Seamen’s Church Institute senior river chaplain Kempton Baldridge, Grace Episcopal Church in Paducah and remaining members of the Loe family, Loe’s story is being told again. For the first time, family members also have a place to honor the World War II sailor’s memory with the dedication of a plaque in Grace Episcopal’s memorial garden. 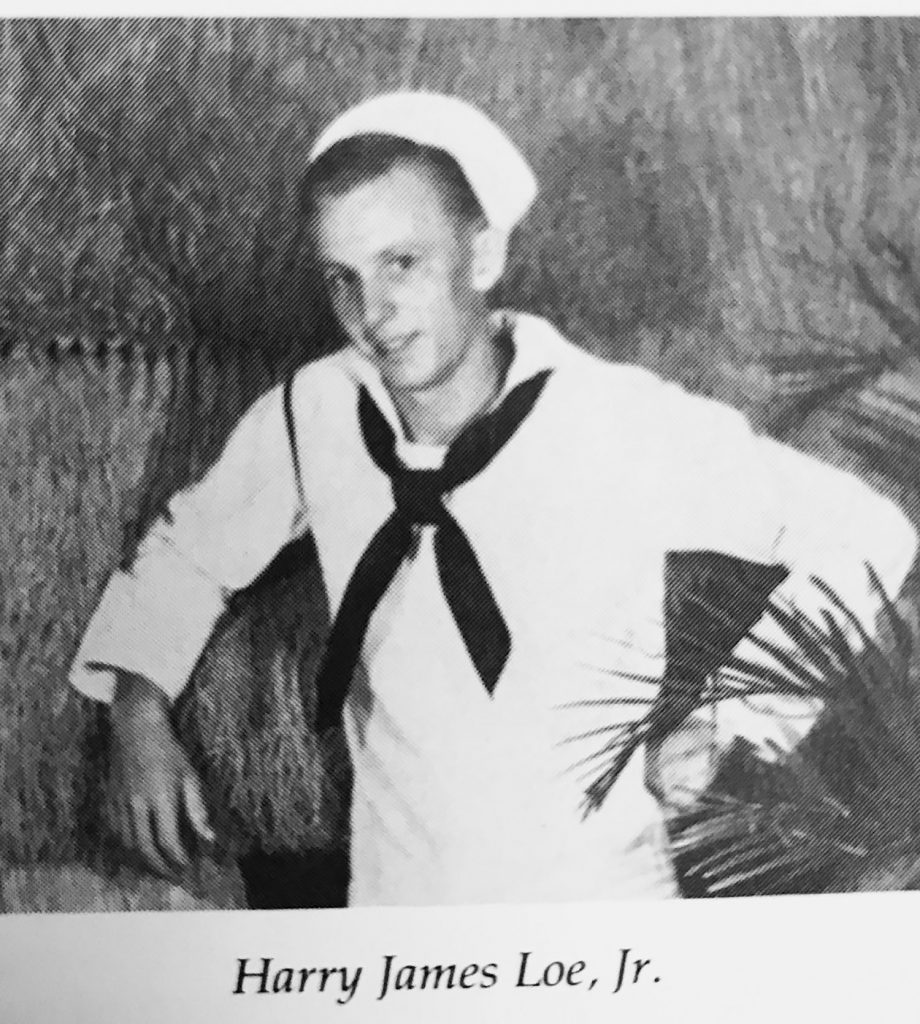 Loe, a member of the church, was killed in action aboard the heavy cruiser U.S.S. San Francisco during combat near Savo Island in the Solomon Islands, and he was buried at sea. He was 20. On February 7, which would have been his 98th birthday, one of Loe’s five remaining siblings, along with several nieces, nephews and cousins, attended a memorial service for Loe and dedicated the plaque.

McCracken Circuit Judge William A. “Tony” Kitchen, a Navy veteran, gave remarks and a tribute to Loe as part of the ceremony.

“On the morning of November 12, 1942, while supporting landing force operations at Lunga Point, San Francisco received word that air attack was imminent and that a Japanese surface force was inbound,” Kitchen said. “The ship came under attack by 30 Mitusbishi G-4M ‘Betty’ Bombers. Petty Officer Loe, along with 10 of his shipmates, manned the aft anti-aircraft 20 mm. platform. As one of the bombers dropped its torpedo at the ship’s starboard bow, the ship turned sharply to port, placing the torpedo on the ship’s starboard quarter. The torpedo missed, but the damaged bomber continued toward Petty Officer Loe and his shipmates manning the 20 mm. gun. The men continued firing at the plane until it exploded upon the platform, killing them instantly. Petty Officer Loe and his shipmates manning the guns were all awarded the Navy Cross for their gallantry.

“Petty Officer Loe’s Navy Cross citation reads, in part: ‘With a complete disregard for his own personal safety, Gunner’s Mate 3rd Class Loe courageously refused to abandon his gun station and, fearless, remained at his gun. In the face of certain death from an onrushing enemy torpedo plane that had been set on fire, he maintained his accurate gunfire until the plane crashed on his station. He was killed in action. His unflinching bravery and gallant conduct were in keeping with the highest tradition of the United States Naval Service.’ ”

The Navy Cross is the second highest decoration awarded for valor in combat. It is second only to the Medal of Honor.

Loe’s nephew, Glenn Loe, said his uncle is one of 17 family members to serve the United States in the military. He believes Loe to be the only person from far western Kentucky to be honored by having a warship named after him. For years, he said, he has tried to get someone to take notice of his uncle’s service. Twice, he said, he went to the Paducah mayor’s office.

“Nothing ever happened,” he said. “All these years, we’ve been trying and trying.”

Then, he ran into Baldridge at an area gas station. Baldridge had seen a small plaque inside the church honoring those who fought in the war and asked if he was a relative. That’s when he learned the rest of the story.

“It’s so heart-warming,” said Margaret Ferguson, Harry Loe’s niece, of the effort all these years later to honor him. “With family, we’ve heard the stories all our lives, growing up.”

Ferguson said her mother, Loe’s sister, kept a print of the U.S.S. Lowe hanging in her house. Her grandmother kept the broken bottle she used to christen the ship for decades afterward.

“For the longest time she had part of the christening bottle in her hope chest, and she would talk about it, but not very often,” Ferguson said.

During the ceremony, the Paducah Tilghman High School Naval Junior ROTC color guard presented the colors and rang a ship’s bell in Loe’s memory. Baldridge read scriptures, including Psalm 121 and, from the Gospel of Luke, the story of Jesus calming the stormy waters while in a boat with the apostles. He also offered prayers, including The Lord’s Prayer and the Prayer for Those Who Mourn.

To conclude his remarks, Kitchen said, “Harry James Loe gave his life so that the United States of America could remain free. His parents gave their son, and his siblings gave their brother. We can never repay the debt that we owe to the Loe family and the many thousands of other families like the Loes. All we can do is solemnly remember Petty Officer Loe, his courage and his dedication to this great nation. My thanks to Chaplain Baldridge for spear-heading the effort to make this memorial a reality and for bestowing upon me the great honor of speaking today. May God bless the Loe family and the United States of America.”