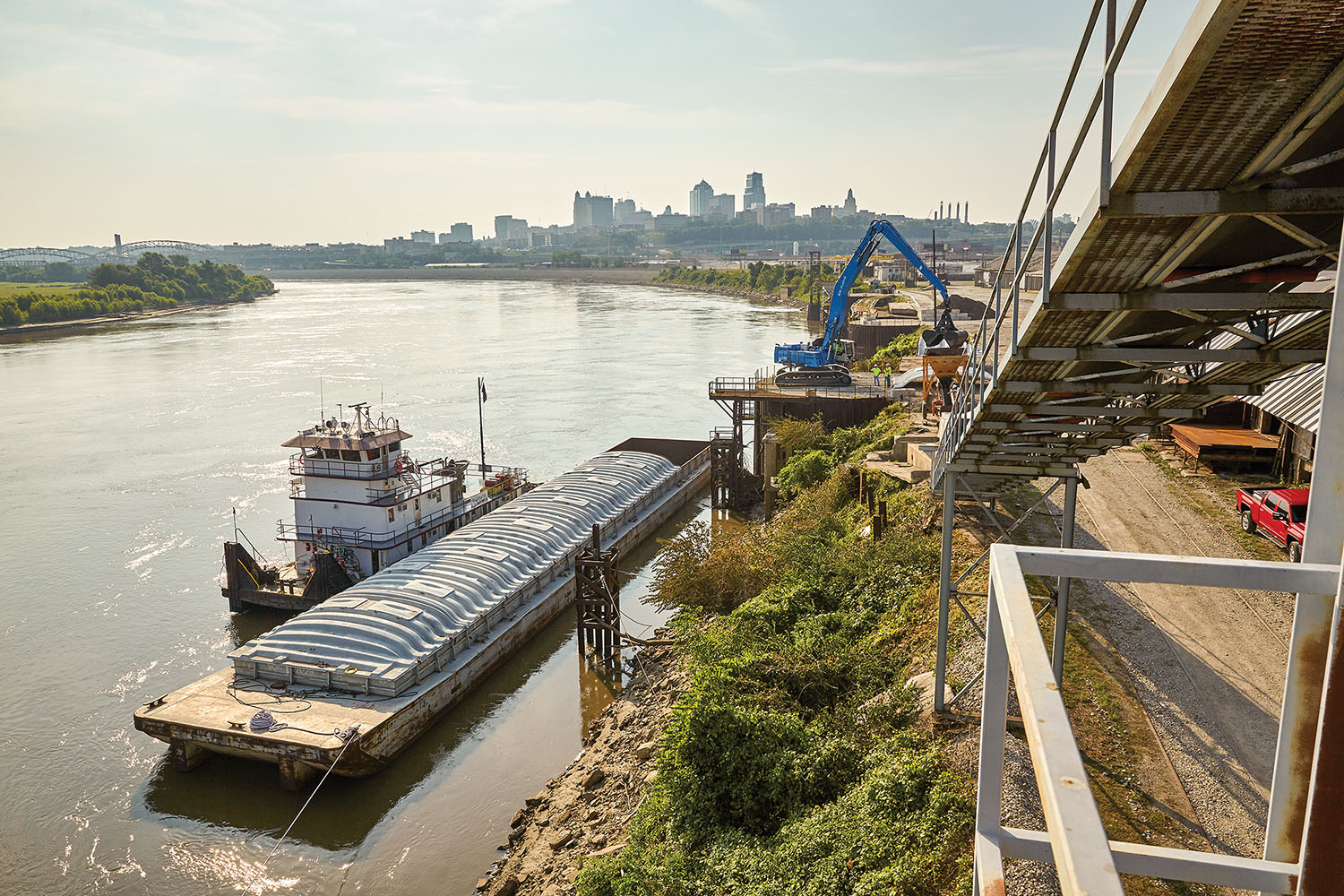 An extended period of high winter water levels along the Missouri River has meant more business for companies using the waterway, but it also has led to acceleration of upgrades at the Port of Kansas City.

“When we reopened the port in 2015, the estimated life of the original mooring infrastructure was seven to 10 years,” said Richard Grenville, vice president of multimodal logistics for the Port of Kansas City. “However, from 2017 to present, we have experienced higher and more robust releases from the upstream reservoirs. Normal releases provide a 9-foot-by-300-foot channel with a reading at the KC gauge of 10 feet. For the past three years, the gauge has not been below 15 feet. This has caused the old structures to deteriorate as barges were tied at higher levels, putting greater strain on the structures at the mud line and causing some to fail.”

As a result, the port has replaced four of its mooring dolphins. Originally, the port planned to replace the structures in phases, starting with two, but it expanded the initial project to replace four of them in a $700,000 project with Massman Construction of Overland Park, Kan.

“The mooring project was approved last spring, but water levels until December were too high to start the project,” Grenville said. “Acceptable levels were not achieved until December. The project was started in mid-December and completed in February.”

That’s highly unusual for the Missouri, where the normal season routinely ends after November. Higher than normal releases from the Gavins Point reservoir, coupled with mild weather, have made it possible for shippers to continue to take advantage of water transportation on the Missouri. Grenville noted that it also affected tow sizes last year, however. Normal tow size is six to eight barges, but it was reduced to four to six last year.

“The new dolphins will serve as replacements to the damaged ones; however, the alternative design will provide a more durable structure capable of handling barge loading and debris impact,” he said.

The new mooring dolphins were installed both upstream and downstream of the port and provide multiple points for tying off and fleeting barges that have just been loaded or are next to be loaded. It’s easier than running lines to the bank to secure the barges and especially helpful for common cargoes at the port, which include fertilizer, scrap metal and coal slag, he said.

The Port of Kansas City has seen double-digit growth in tonnage since reopening, Grenville said.

“In 2015, we handled 13,000 tons, and this year, despite the fact that St. Louis was closed to navigation for nine weeks, we handled more than 100,000 tons,” Grenville said, referring to the port’s 2019 numbers. “Kansas City has been a freight hub for many years and now has a viable navigable waterway and is a true multimodal freight hub.”

He added that it’s not just the Port of Kansas City that has come online in recent years. Ports and terminals are also open for business now in St. Joseph, Mo.; Lexington, Mo.; Omaha, Neb.; Nebraska City, Neb.; and Walcott, Kan.

The Port of Kansas City is also involved in developing other projects along the river, including Berkley Riverfront, an 85-acre development and park site down river. Additionally, Union Berkley Riverfront opened in 2018, featuring 410 apartment units. It is the largest single-phase multi-family development project in the entire Kansas City metropolitan area. The same year, Bar K opened. It is a fully staffed, professionally maintained dog park featuring a restaurant and bar. Membership was at capacity even before it opened.

“To turn this previously undeveloped land into a mixed-use world-class part of our city, we focused on investment and environmental revitalization over the span of 30 years,” said Jon Stephens, Port of Kansas City president and chief executive officer. “Our vision for the riverfront includes a diverse, walkable community that is an extension of downtown.”

When complete, the 55-acre riverfront will feature more than 65 million square feet of mixed-use office, residential and retail space, what Stephens and others are calling Kansas City’s front yard.

The U.S. Army Corps of Engineers continues to improve the Missouri River’s navigation channel, and the reliability for navigation improves year after year, Grenville said.

“The growth and demand at the Port of Kansas City will result in significant improvements in years to come,” Stephens said. “The goal is to consistently be one of the fastest growing and innovative ports in the Midwest.”

Grenville added, “Having to reopen a 70-year-old facility has its challenges, especially where decaying infrastructure is concerned. Our capital plan for the next 10 years is over $30 million and includes a new dock, rail car conveying system, improved storm water retention storage dome structure and repaving the terminal.”

Caption for photo: Since the Port of Kansas City reopened in 2015, it has seen double-digit growth in tonnage of cargo passing through it and recently completed a major project with Massman Construction to replace four mooring dolphins. High water levels along the Missouri River and mild weather have led to shippers taking advantage of water transportation during an extended season. Other ports have also reopened. (Photo courtesy of Port of Kansas City)