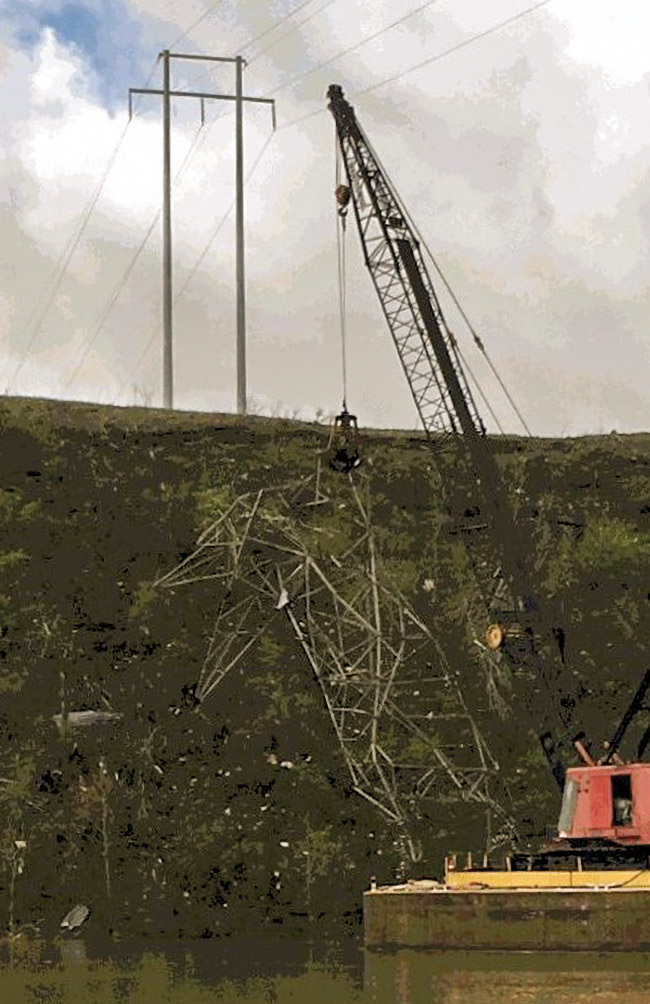 U.S. Coast Guard and U.S. Army Corps of Engineers crews, working closely with the Tennessee Valley Authority, located and recovered a high-voltage electricity transmission tower the afternoon of March 10 on the bottom of the Cumberland River near Nashville, Tenn.

The TVA electrical transmission tower tumbled into the river after being knocked off a cliff by the tornado that devastated downtown Nashville about 2 a.m. March 3.

Crews knew the tower, which is more than 15 feet tall, was located in about 30 feet of water; however, they were not able to pinpoint its exact position until Tuesday afternoon, said U.S. Coast Guard Lt. David Schneider, a public affairs officer for Sector Ohio Valley. They had been trying to locate and retrieve it since March 5 and utilized both divers and side-scan sonar, he said. Crews recovered the tower about 1:30 p.m. Tuesday, leaving nothing on the river bottom.

The river had been closed for a couple of hours each March 6 and 8 at Mile 182 as crews staged equipment to be used in the location and recovery, Schneider said. He added that high winds and strong currents made the task more challenging.

Following the recovery, he expected no further river restrictions. An electrical transmission line that fell into the water was recovered over the March 7–8 weekend, he said.

Schneider also provided an update on the barges that broke free from a Hines Furlong fleeting area at Mile 176 during the tornado. Twenty-nine barges broke free, not 30 as originally reported, he said. They were a mixture of empties and those with dry and liquid cargo. Twelve of 13 tank barges loaded with diesel or gasoline received significant damage that will require repairs, he said. Those loaded with gasoline had already been offloaded, he said, and those carrying diesel were expected to be offloaded shortly. The barges will all head to other areas for repairs by the companies that own them. No one was hurt, and the Coast Guard found nothing had spilled into the river. Several barges did crash into recreational docks downstream, causing damage to them, however. The barges were retrieved by Hines Furlong Line boats and helper boats from other companies.

Caption for top photo (click image for full photo): A crane pulls a collapsed high-voltage electrical transmission tower from the bottom of the Cumberland River near Nashville, Tenn., on March 10. The tornado that devastated Nashville on March 3 knocked the tower from a nearby cliff and into the Cumberland, causing intermittent closures until its retrieval from just outside the navigational channel. (Photo courtesy of U.S. Coast Guard)