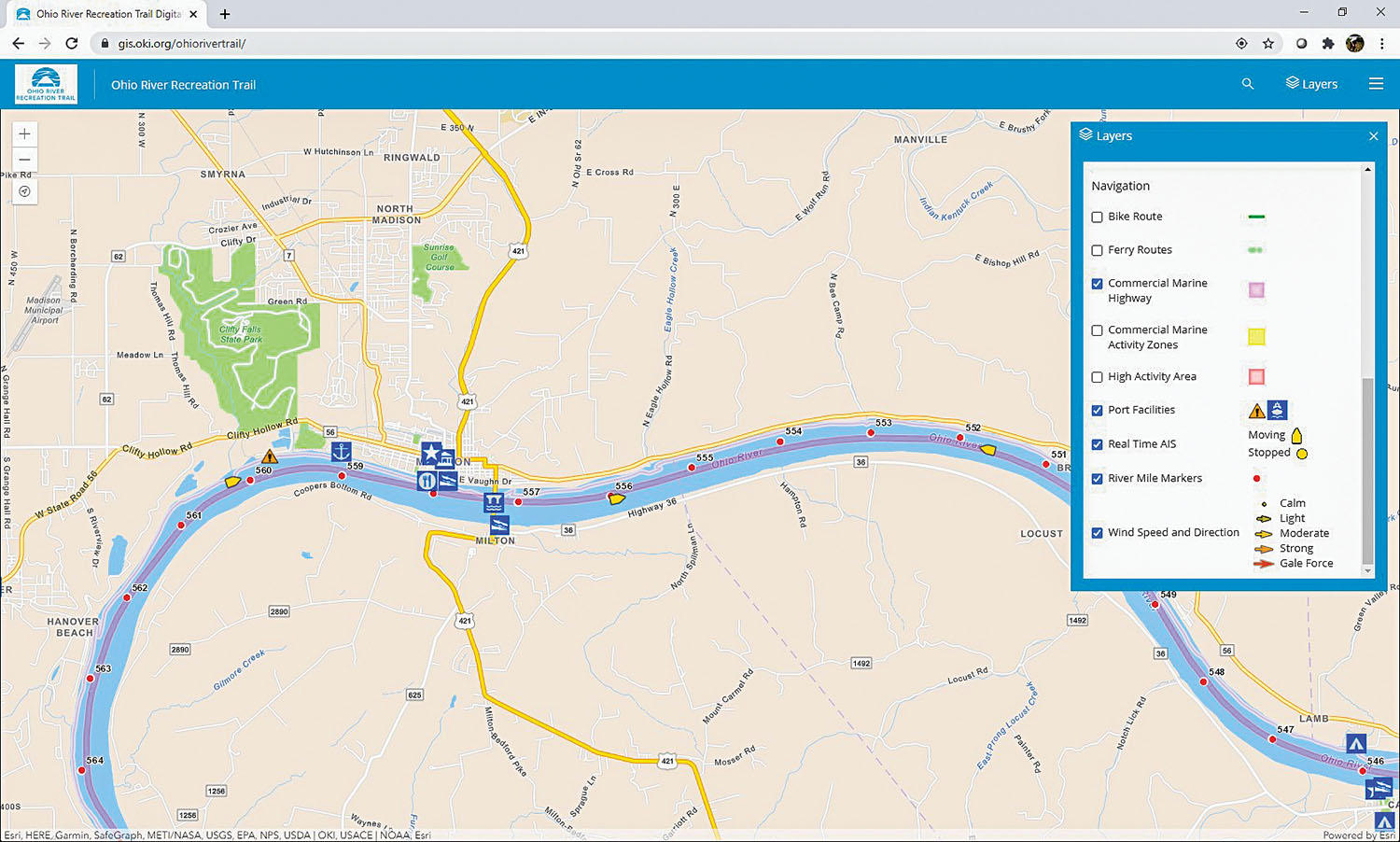 The guide was designed by the Ohio Kentucky Indiana Regional Council of Governments (OKI). It is accessible by going to www.ohioriverrecreationtrail.org and clicking on “Digital Guide” on the webpage’s top right corner.

Guide users can check boxes to decide what is important for the map to show them, including: river access points, wind direction and speed, a towing vessel’s location using AIS data, river milepoints, ports, marinas, lodging, restaurants, historical sites and other attractions. They can choose points that are land-based, for bicyclists, or water-based, for kayakers as well as other recreational boaters. The guide is accessible on any device with internet or Wi-Fi capability, unlike an app.

“We have a vision of connecting up to Pittsburgh, and I would certainly like to see it go all the way to Cairo,” Rutter said.

Eventually, he said, he would also like to explore inclusion of Ohio River tributaries.

AIS data is more limited for now and is included for portions of the river between Huntington, W.Va., and Louisville, Ky.

The guide went live June 22 and was developed by OKI with assistance from a grant from the National Park Service Trail Assistance Program as well as partners River City Paddlesports in Louisville and Adventure Crew in Cincinnati, Ohio.

Developers had been working on it for two years, Rutter said, adding that he has personally paddled the river to make sure the guide is easily accessible to those on the river and as accurate as possible.

“For many paddlers, having any sort of navigation is rare, but with the digital guide, not only can they know where they are, but also what kind of traffic is on the water,” Rutter said.

Unlike many other guides, users can submit suggestions for new locations to include, which will help the guide to stay current, Rutter said. They can also report changes, such as if a restaurant has closed.

“So far it’s been really positive, just people saying, wow, we really needed this,” Rutter said. “The smalltown leaders were very excited about having a trail and something that would bring people to their towns and highlight what they have to offer.”

OKI solicited input and assistance from the Central Ohio River Business Association, which encouraged use of the AIS data. The guide indicates whether a vessel is moving or stationary and uses a pointed icon to indicate a towboat’s direction of travel so that boaters have more time to move over, even if a bend in the river or other conditions might impact them from having a clear view. Users can also click on the icon for more information, including the boat’s name.

“CORBA and OKI began a collaboration many years ago that led to the creation of a world-class, award-winning mapping tool we fondly call CORIS (the Central Ohio River Information System),” CORBA executive director Eric Thomas said. “CORBA provides the data, and OKI provides the web-based platform for CORIS. CORBA gave its blessing for OKI to utilize the CORIS data so that they could assist in creating the Ohio River Recreation Trail Guide.”

Thomas added that the Ohio River is a public asset accessible to a variety of users, including both recreational and commercial purposes.

“CORBA supports this tool as a means to help educate the general public about the importance of the river as a driver of commerce, to inform them about specific landmarks along the river’s banks, and to stress the importance of safely co-existing with industry for a safe and pleasant experience for all especially in those reaches of the river that have a concentration of industrial/commercial users,” Thomas said.

He said CORBA’s greatest desire is that all the river’s many users can access it with the utmost safety for all and that he hopes the guide is an effective tool toward that end.

Caption for photo: A screenshot from the Digital Guide to the Ohio River shows a river segment near Madison, Ind., including stopped and moving towing vessels, ports, the marine highway and river miles as well as points of interest. (Screenshot provided by Ohio Kentucky Indiana Regional Council of Governments)