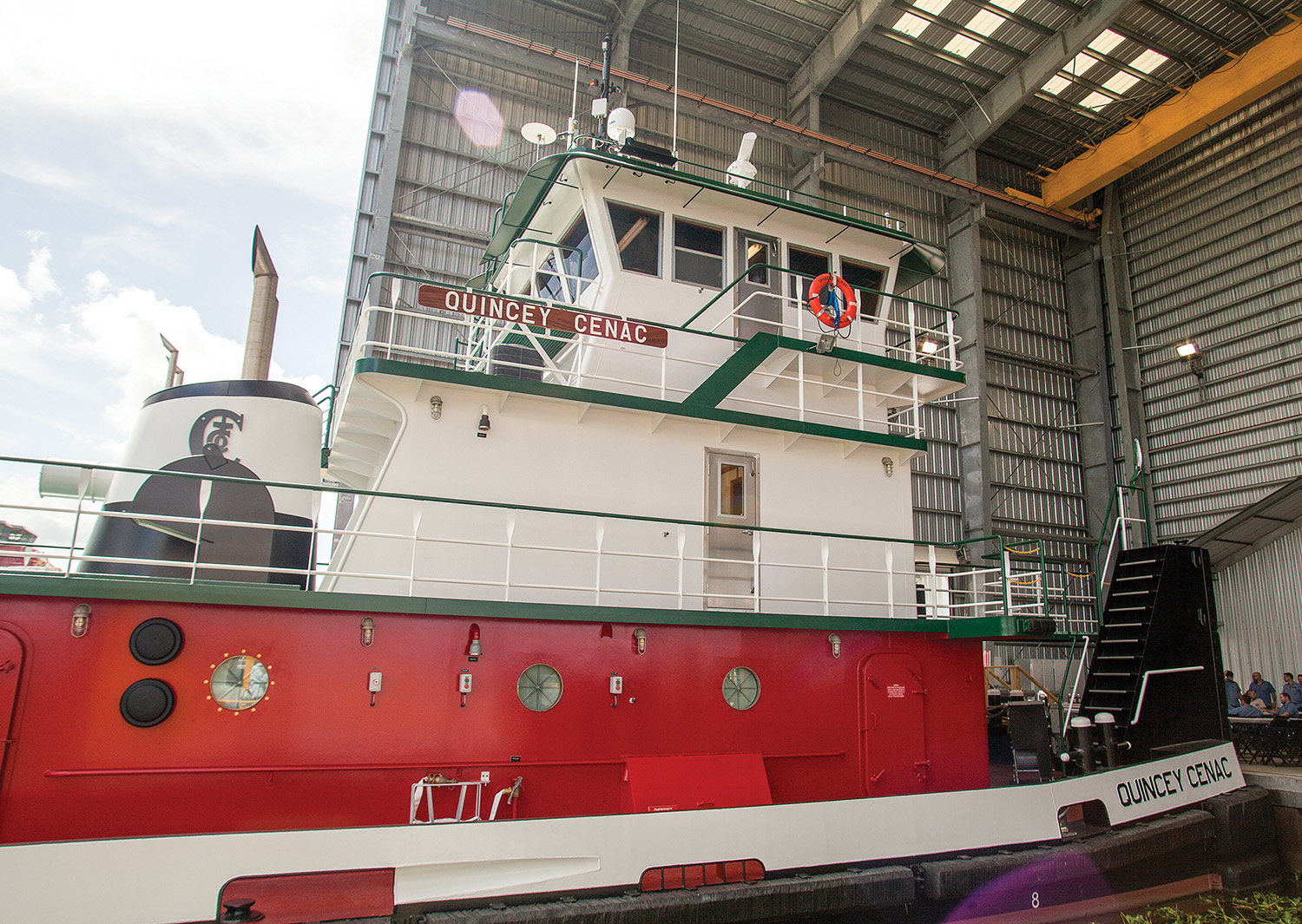 Cenac Marine Services held a special christening ceremony July 29 at its Houma, La., headquarters where, in addition to welcoming the mv. Quincey Cenac to the Cenac Towing fleet, the company donated a spud barge to Terrebonne Parish designed to aid in the maintenance of hard-to-reach levees in the area.

Members of the Cenac Towing family gathered for the christening of the Quincey Cenac—the 24th and final towboat in that series—underneath the towering roof of one of the company’s maintenance and repair hangers. In addition, Terrebonne Parish President Gordon E. “Gordy” Dove and Terrebonne Levee and Conservation District Director Reggie Dupre Jr. were there to accept the donated spud barge on behalf of the parish.

The barge donation came about as a result of Main Iron Works, the historic Houma shipyard acquired by Cenac Group last year, taking on a pair of barge maintenance contracts with the Terrebonne Levee and Conservation District. When one of those barges, dating back to the early 1970s, was put on drydock, the crew at Main Iron Works uncovered significant structural issues. Dupre said, as the barge was being washed, the bottom started falling out of it.

“I got a call from my operations manager Greg Gautreaux,” Dupre said. “We decided we weren’t going to spend $180,000 on, really, a piece of junk. We said, ‘Let’s just cease this contract. We’re going to pay Main Iron Works what we owe them and we’ll figure out in the future how we’re going to solve this dilemma of not having a barge.’”

Dupre said at lunch later that day when he saw Cenac Towing CEO Benny Cenac sitting nearby he walked over to apologize for having to cancel the contract.

“He told me, ‘Well, I’m going to build you a new one,’” Dupre recalled. “I said, ‘Well, wait a minute, I’ve got to go to public bid I can’t just order a new barge. We’ve got to have plans and specifications.’”

About a week later, Dupre received a call from Cenac: “Benny tells me, ‘What if I build it for free?’ I say, ‘Well at that price I don’t believe we have to go to public bid. I don’t even have to call my levee board attorney on that one.’”

Dupre said the new spud barge will play a crucial role in the parish’s flood protection efforts as the levee district maintains its miles of remote island levees, which are only accessible by boat. The barge has four spuds, extendable posts for anchoring it in place, and a gate for loading and unloading equipment. The barge is also small enough for the levee district to move it with its 36-foot cabin boat, Dupre said.

Dupre said the district will also use the barge during storms and high-water events while crews operate floodgates in the area.

“What a great day for Terrebonne Parish and the Cenac family,” Dove said. “This is a perfect barge and, as you can see, it’s built Cenac-style, with class. If Benny builds something, there’s nothing better.”

Cenac said the barge donation was all about giving back to the parish that his family has called home for generations and helping preserve it for future generations.

“This land has occupied a special place in our hearts. We started in the oyster and the seafood business and cattle since my great-great-grandfather got here in 1860,” Cenac said, noting that where his great-great-grandfather tended cattle is now open water. “So these levees are very vital to our survival. We built this barge and donated this barge to the levee district in order to maintain our levee system. It’s just our way of giving something back to help preserve our parish.”

Cenac also thanked Cenac Towing team members for their hard work “that makes Cenac a success and, in turn, enables us to do the things we do.”

Following the presentation of the donated spud barge, Cenac and his two sons boarded the mv. Quincey Cenac to christen the towboat into the Cenac Towing fleet. The mv. Quincey Cenac, measuring 72 by 30 feet, is named for a nephew of the Cenac family’s ancestral patriarch, Jean Pierre Cenac Sr.

Three generations of the Cenac family gathered on board the mv. Quincey Cenac to shatter a bottle of champagne over its bulwarks to officially christen it into the Cenac Towing fleet. Alongside Benny Cenac and his father, Arlen Sr., his two sons, Jack and John, broke the bottle of champagne.

“That was another highlight,” Cenac said. “My father had to go up there and show them how to break the bottle.”

Father Vincente De La Cruz from St. Anthony of Padua Church in Houma offered a prayer for safety and success for both the mv. Quincey Cenac and the crew.

With the christening of the Quincey Cenac and that series of towboats complete, Cenac Marine Services and its shipyards have multiple vessels under construction, including a new series of 96-foot towboats that will exceed 3,000 hp. Keels have been laid for six towboats in the new series, which will be able to push three or four 30,000 barrel tank barges up and down the Mississippi River and its tributaries. Cenac said the company is also building a triple-screw 2,100 hp. towboat.

“We’re building these ourselves from scratch under Main Iron Works to sell to Cenac,” he said.

See the slideshow below for more pictures from the ceremony (all photos by Frank McCormack): 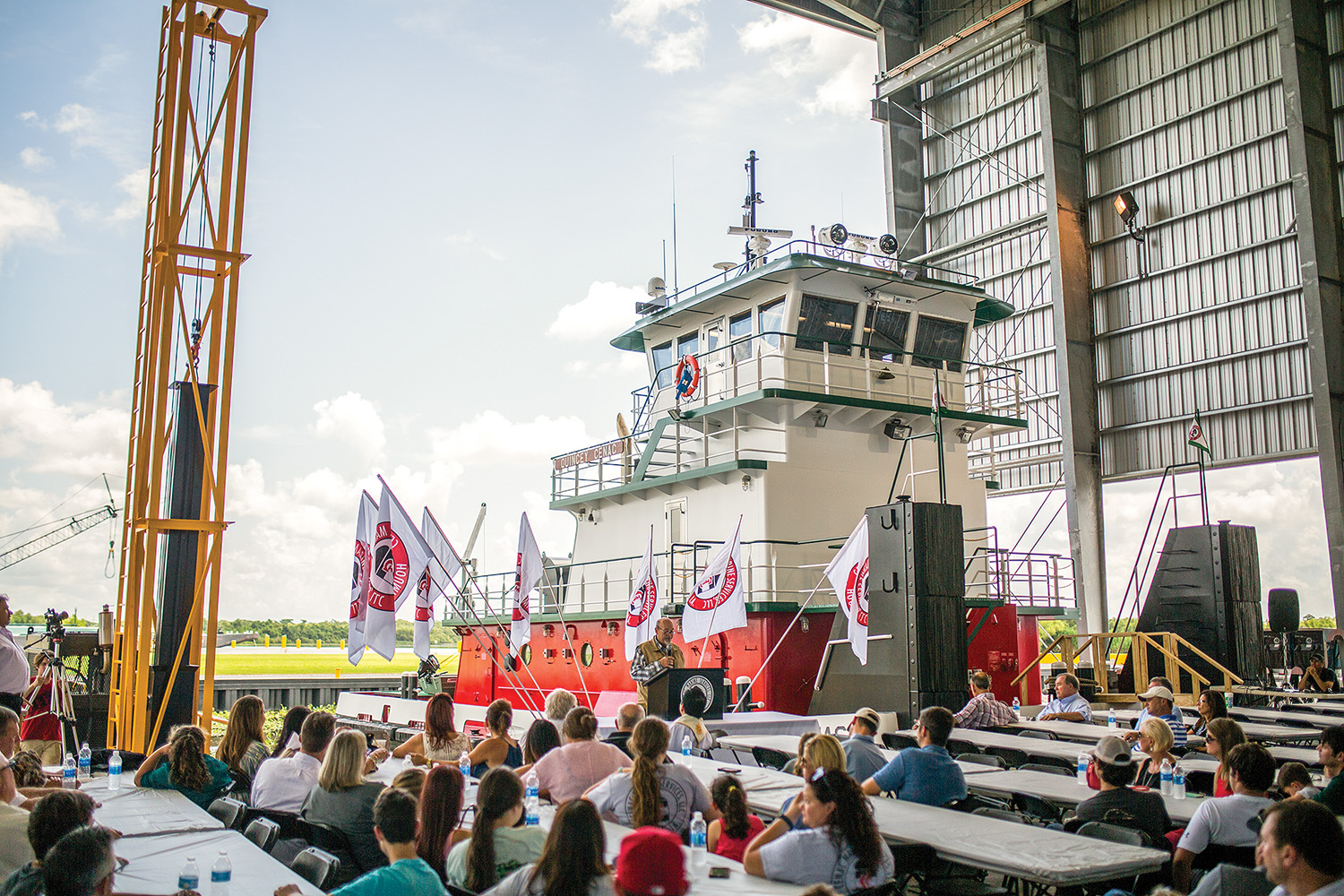 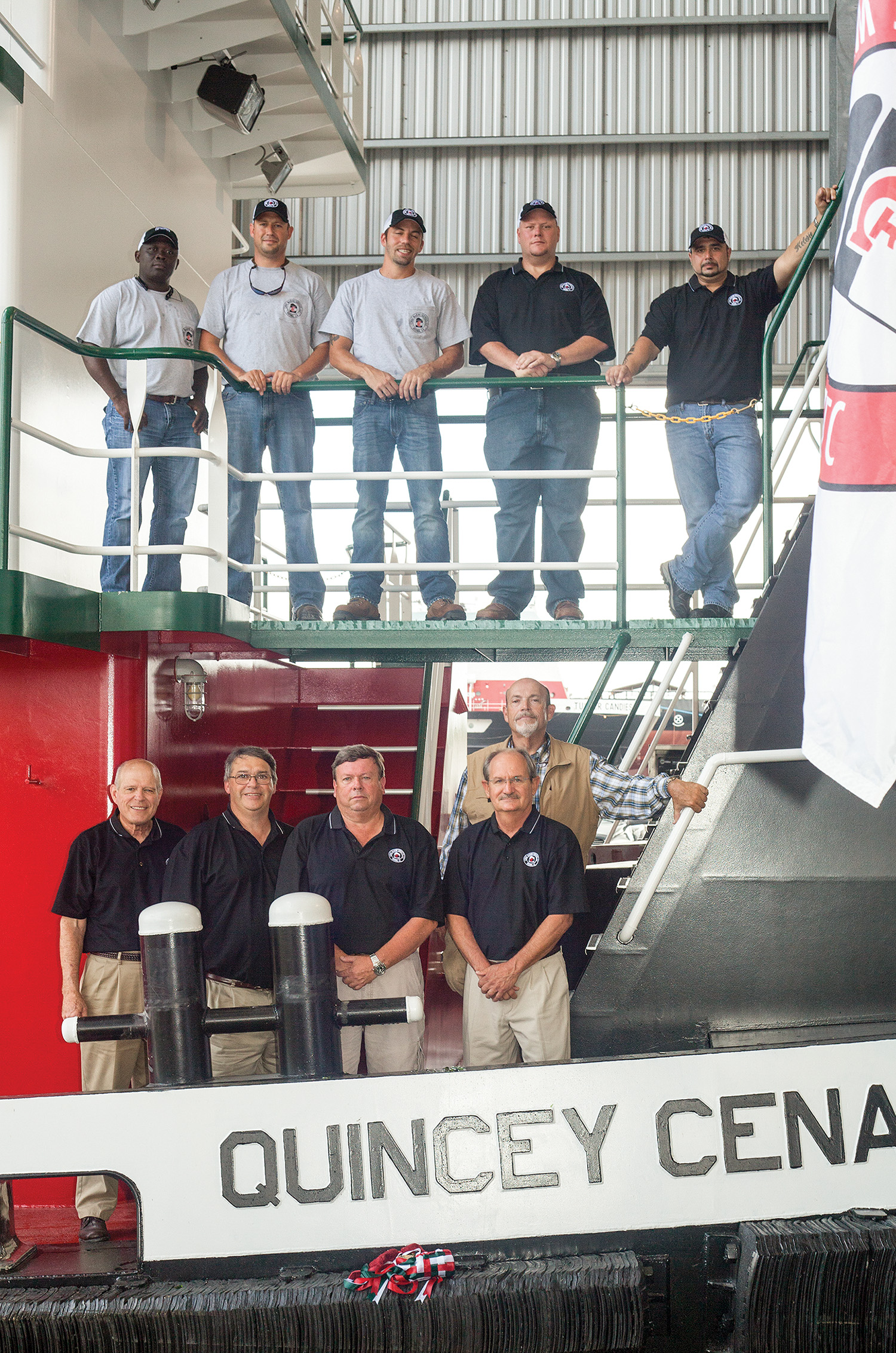 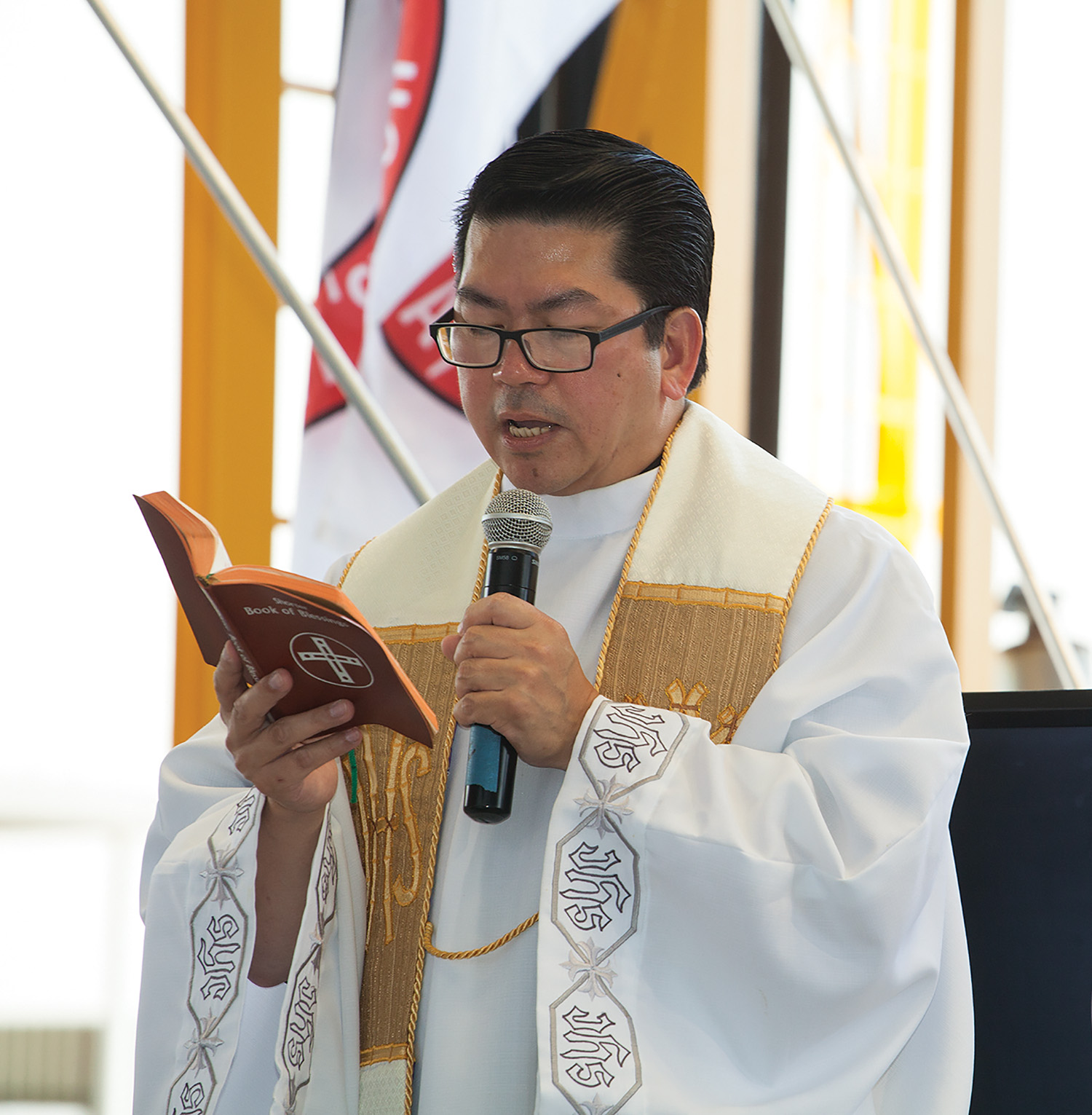 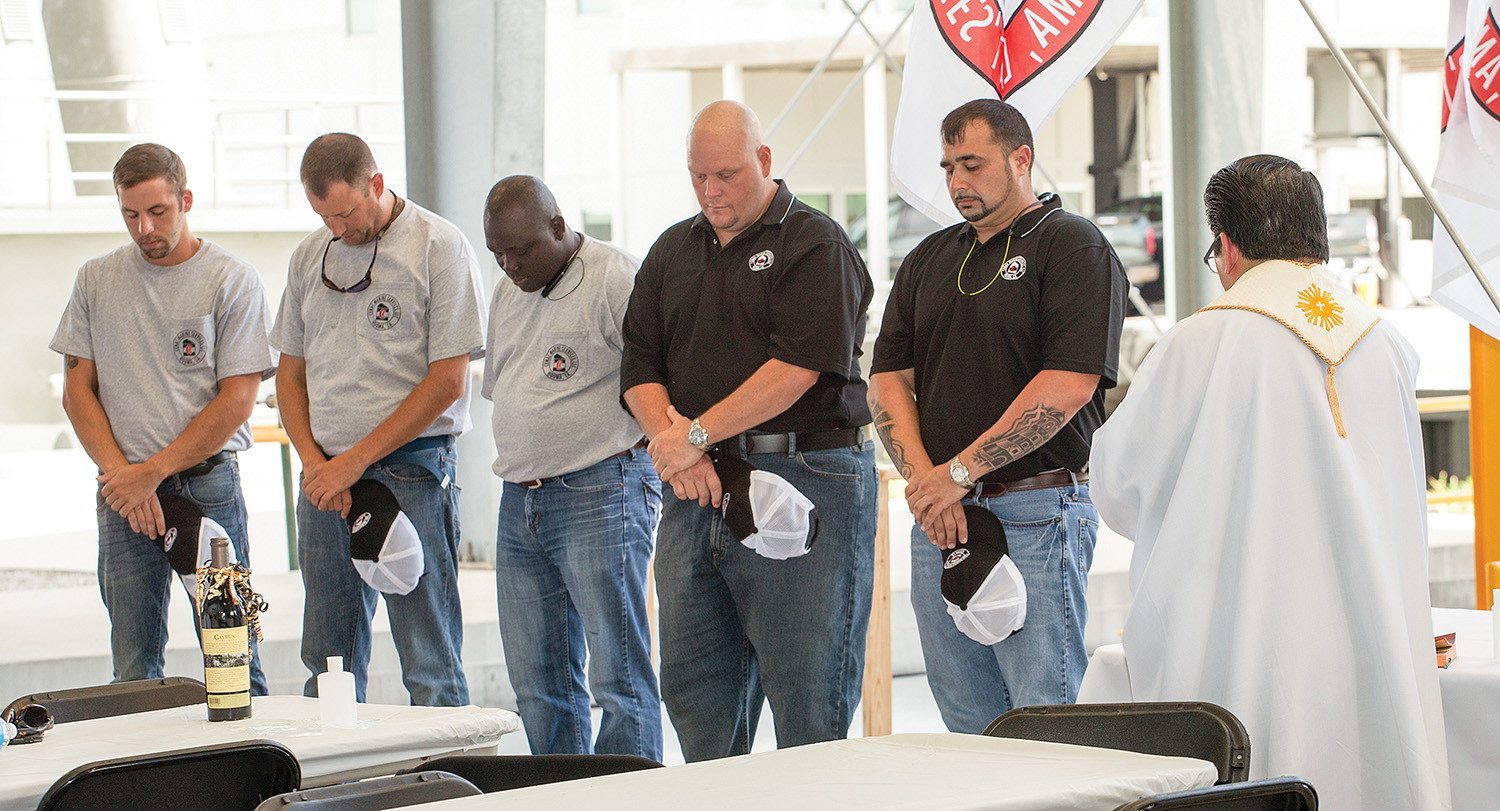 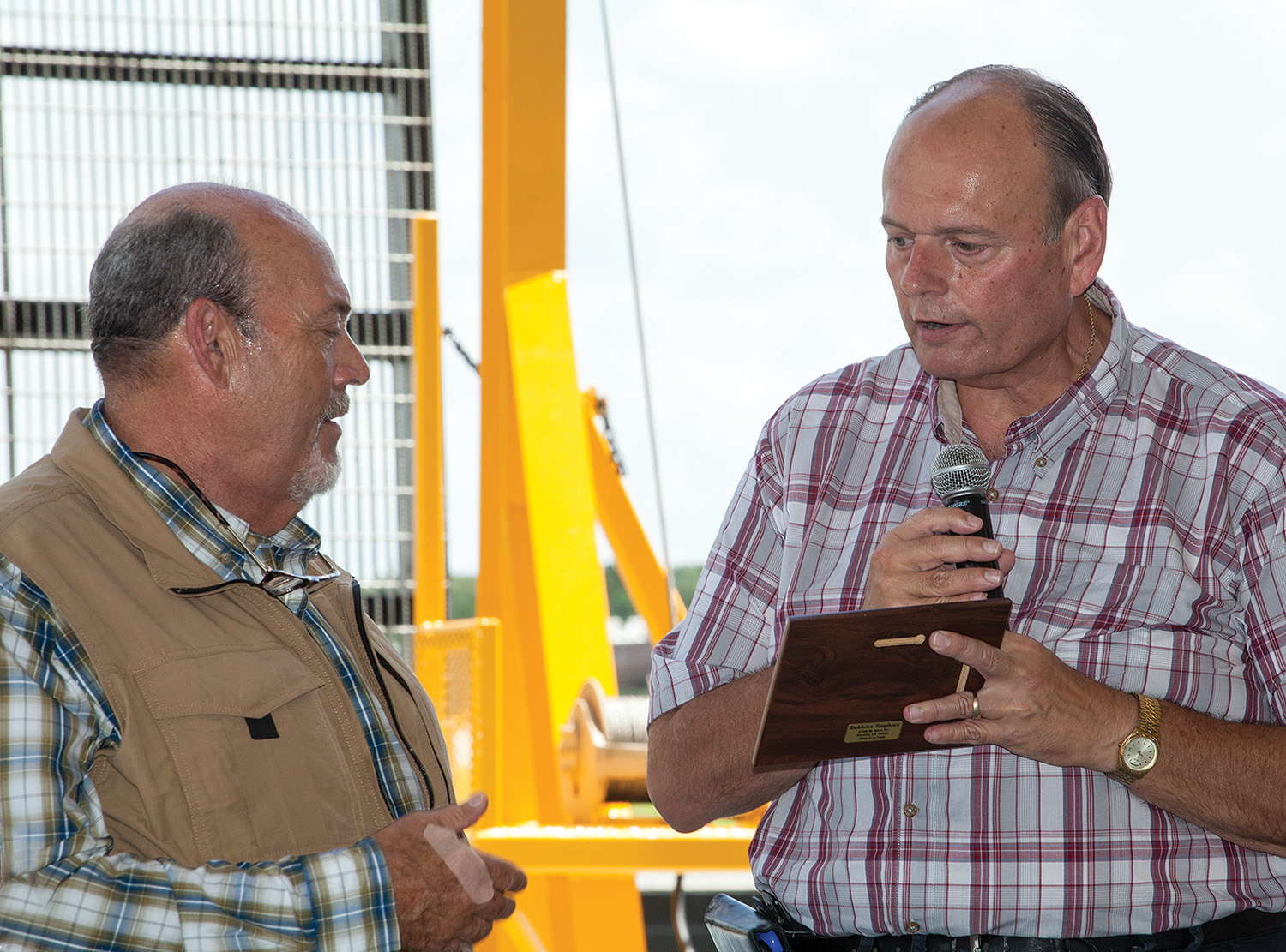 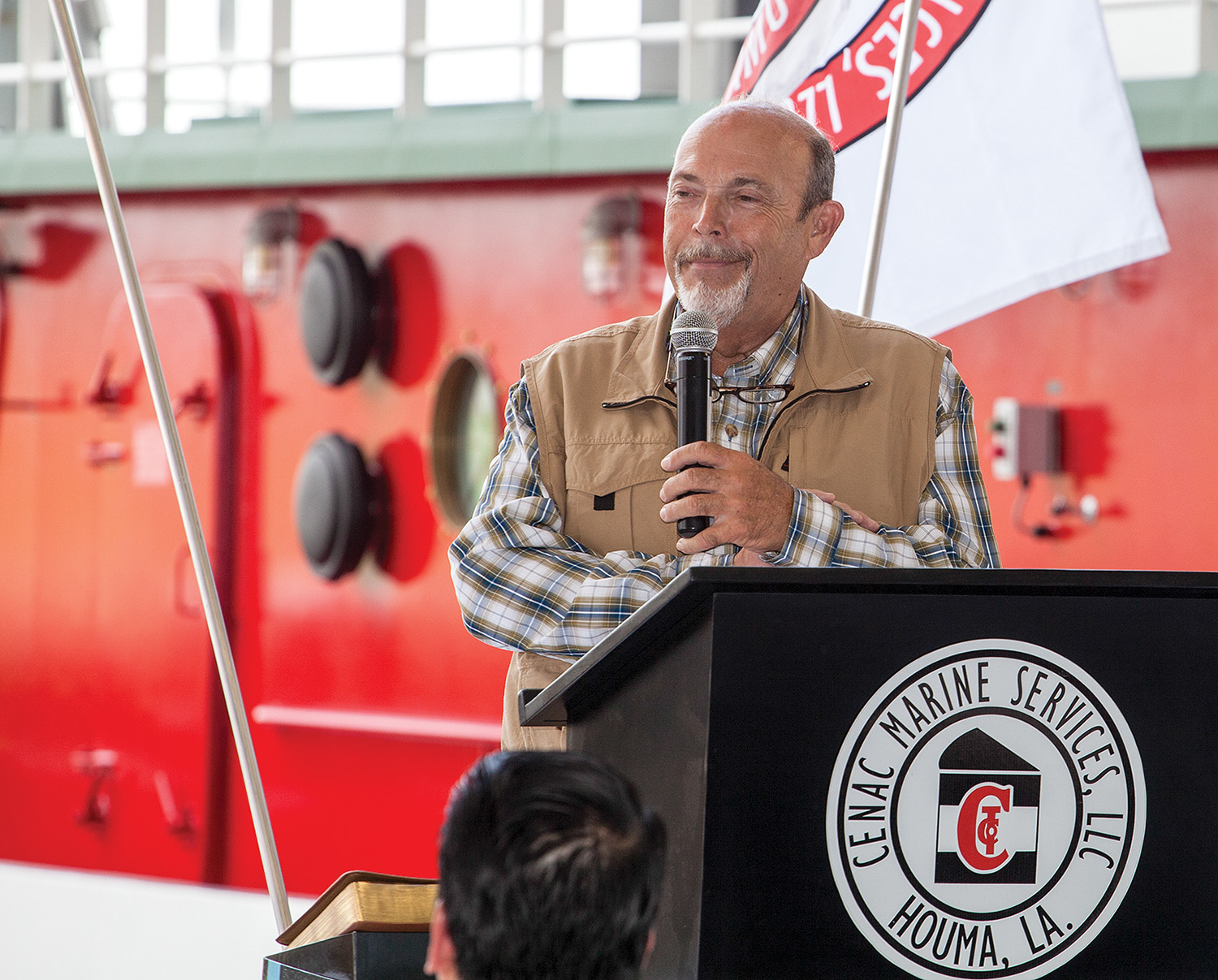 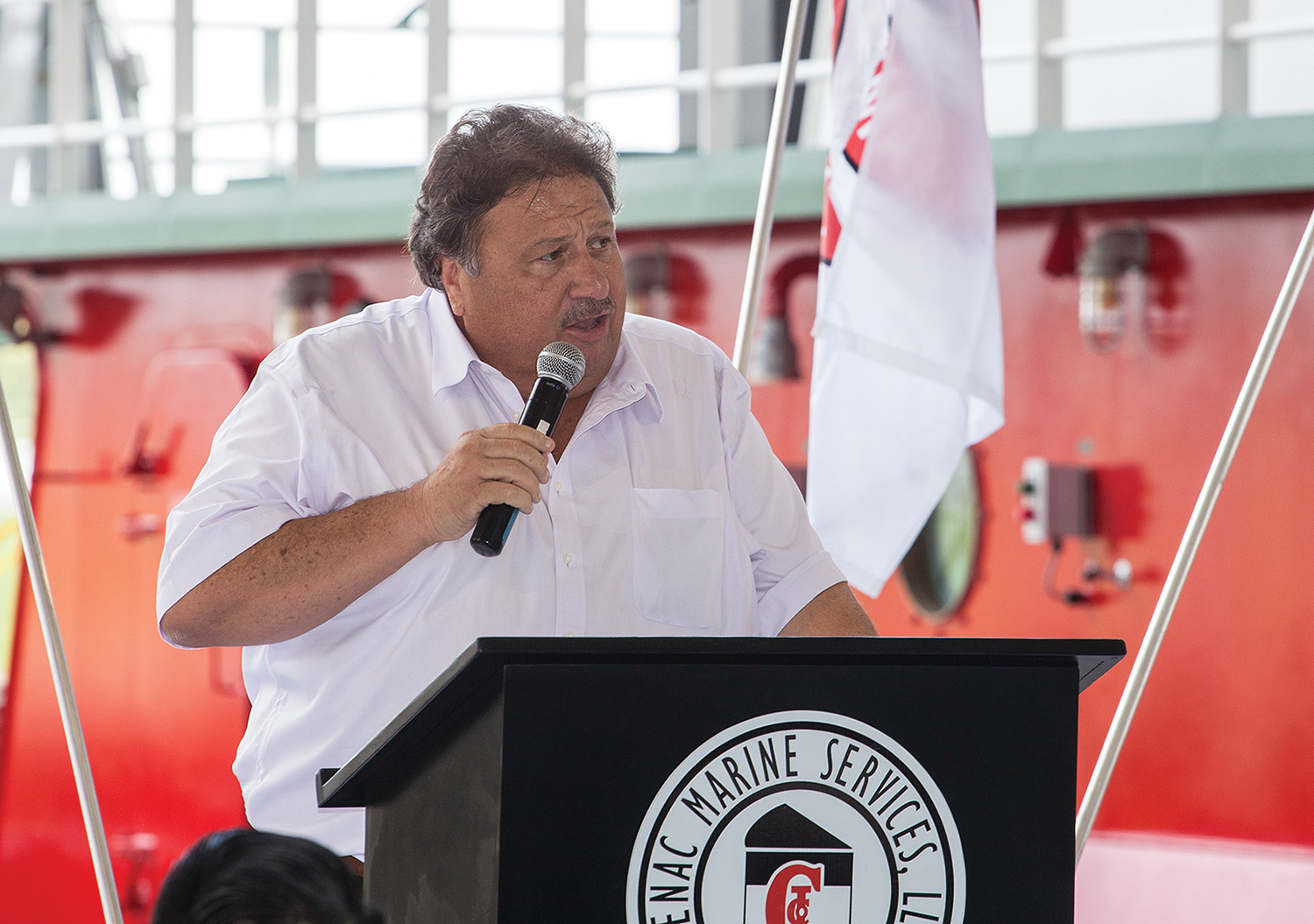 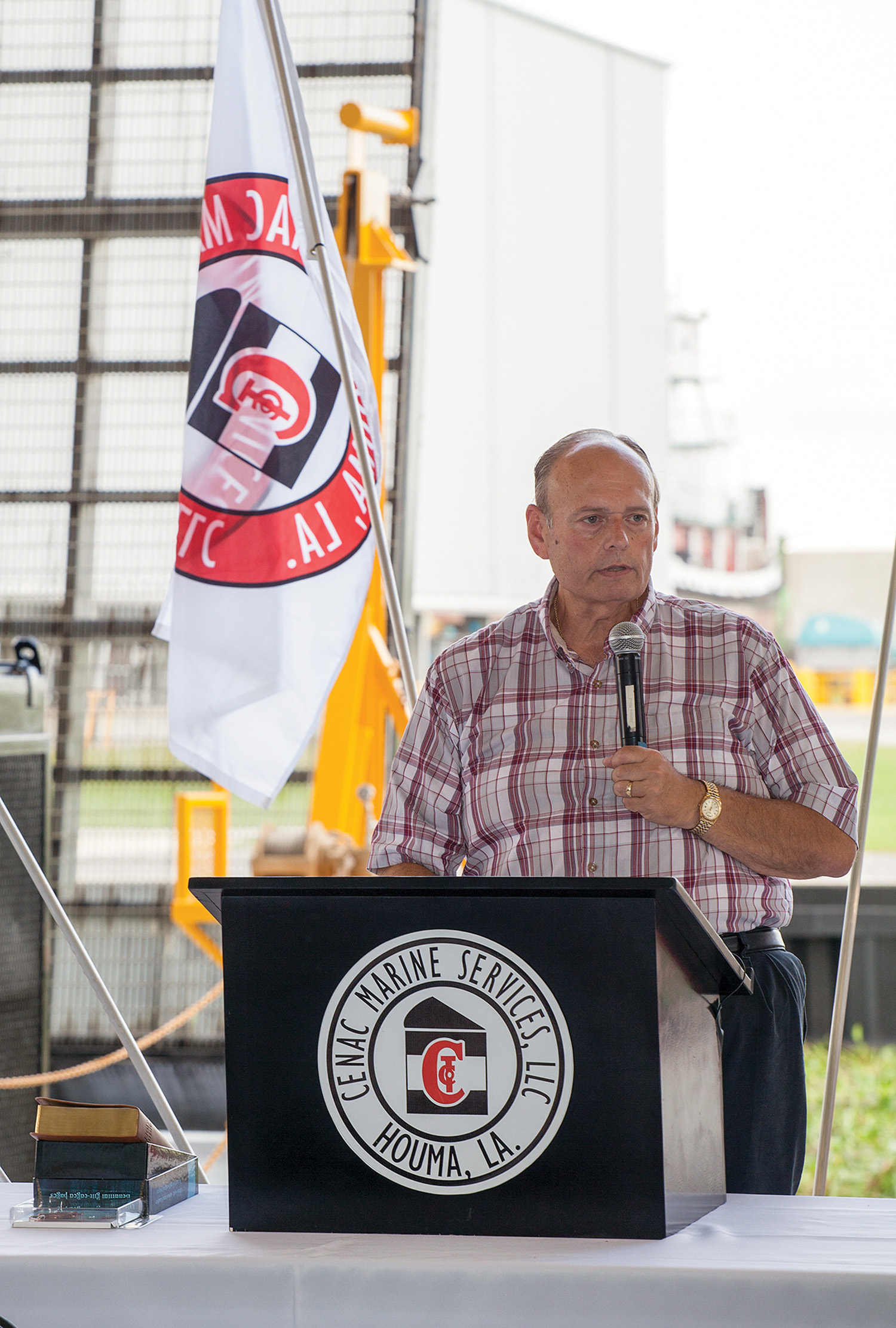 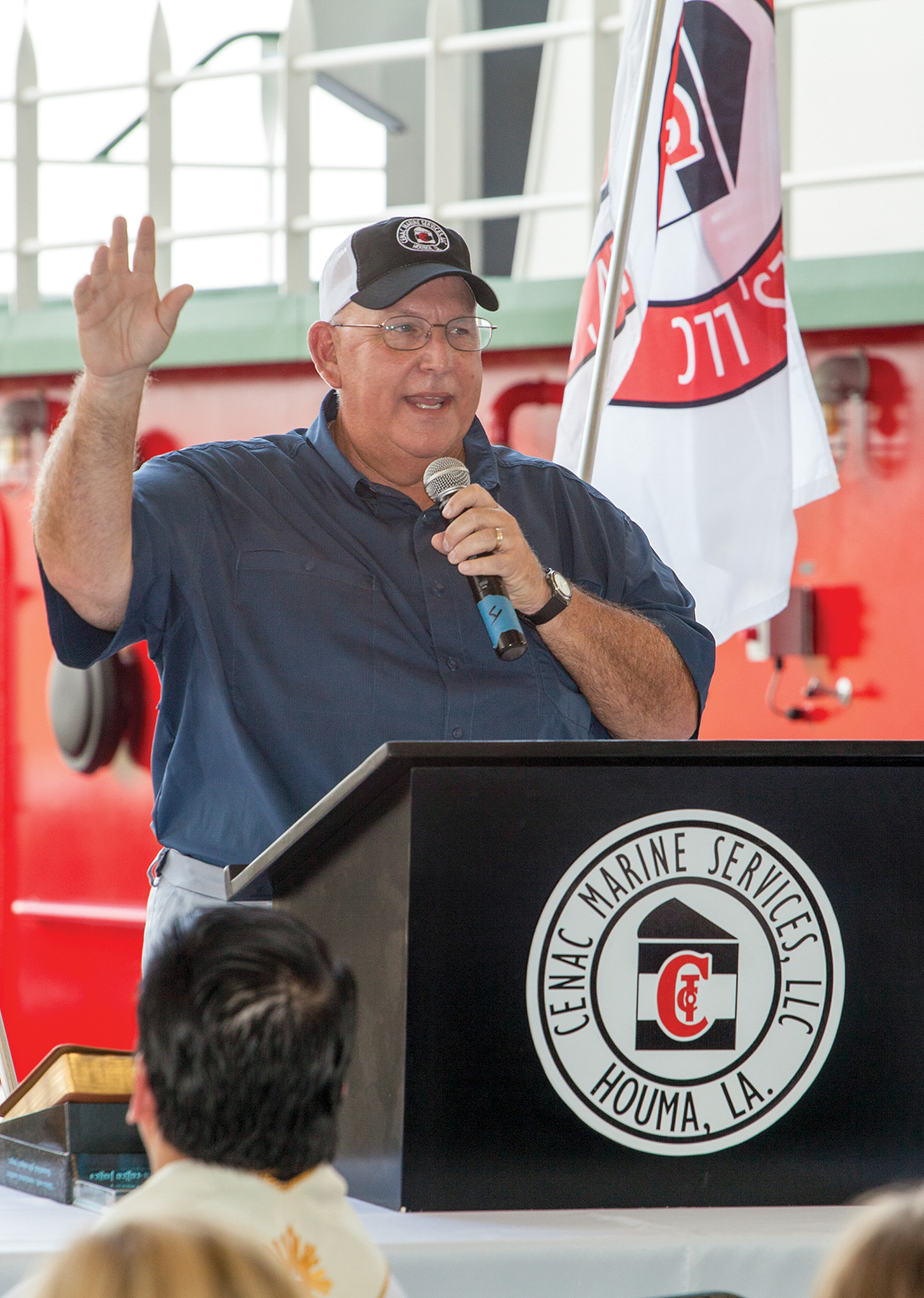 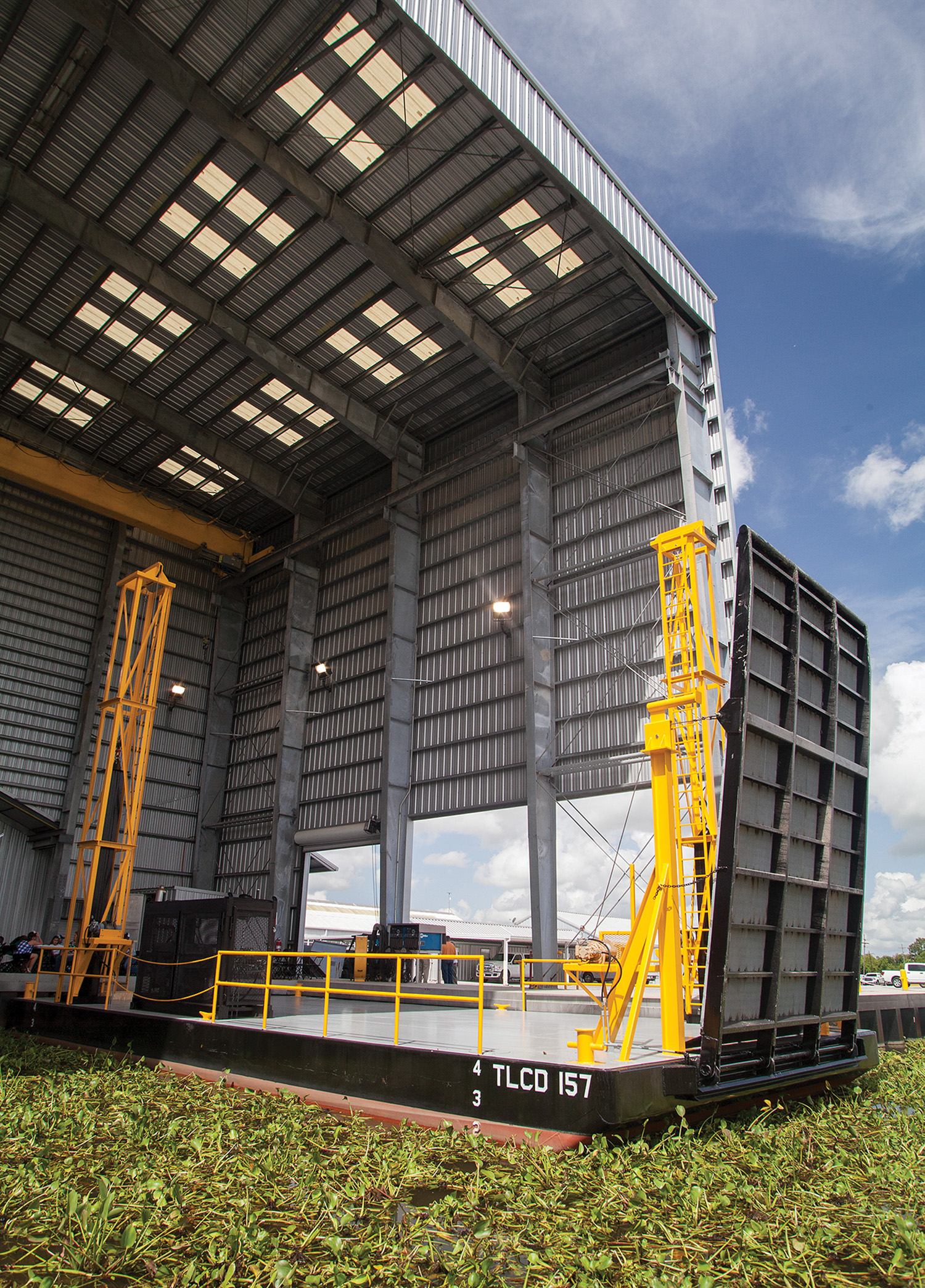 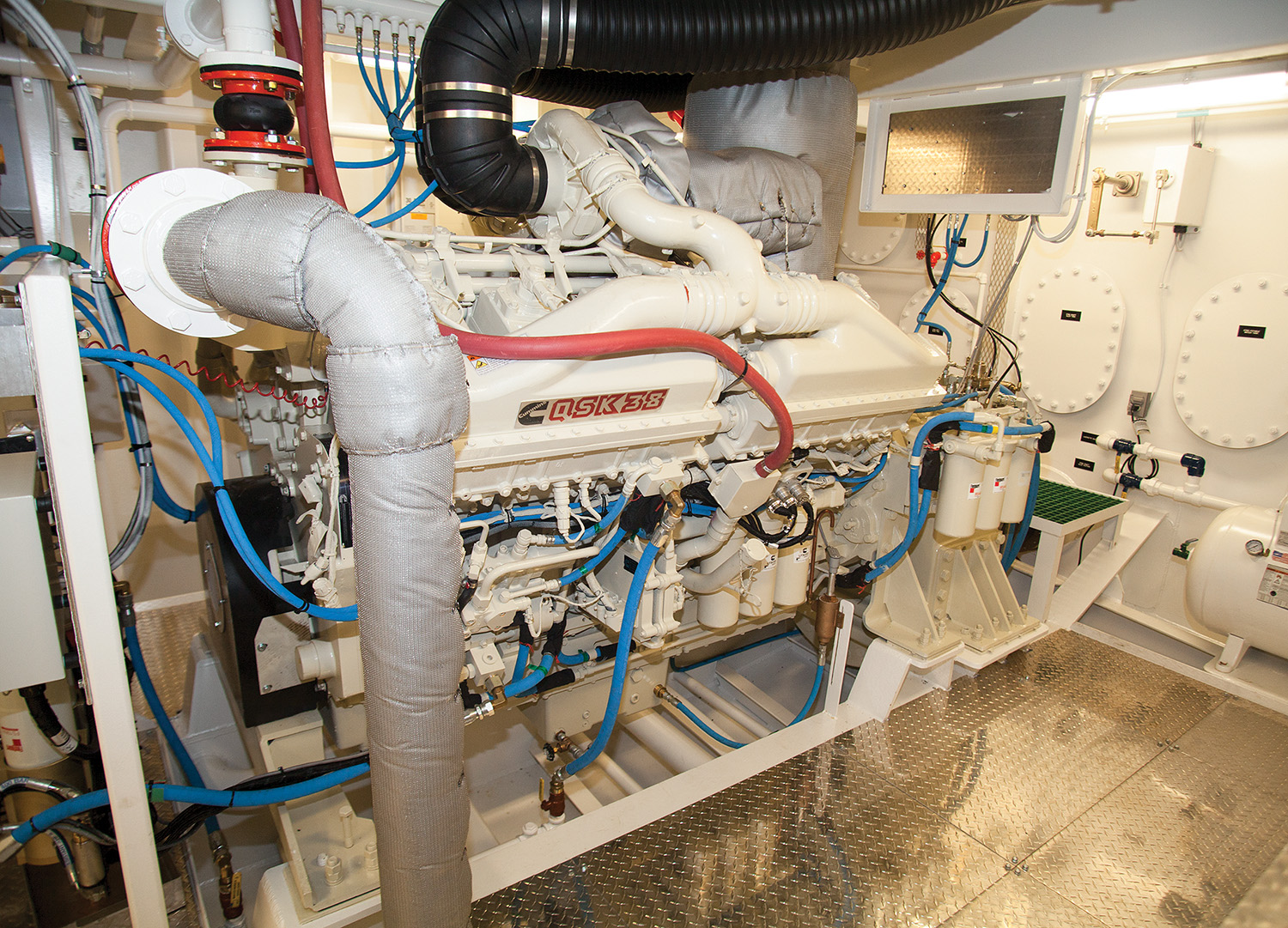 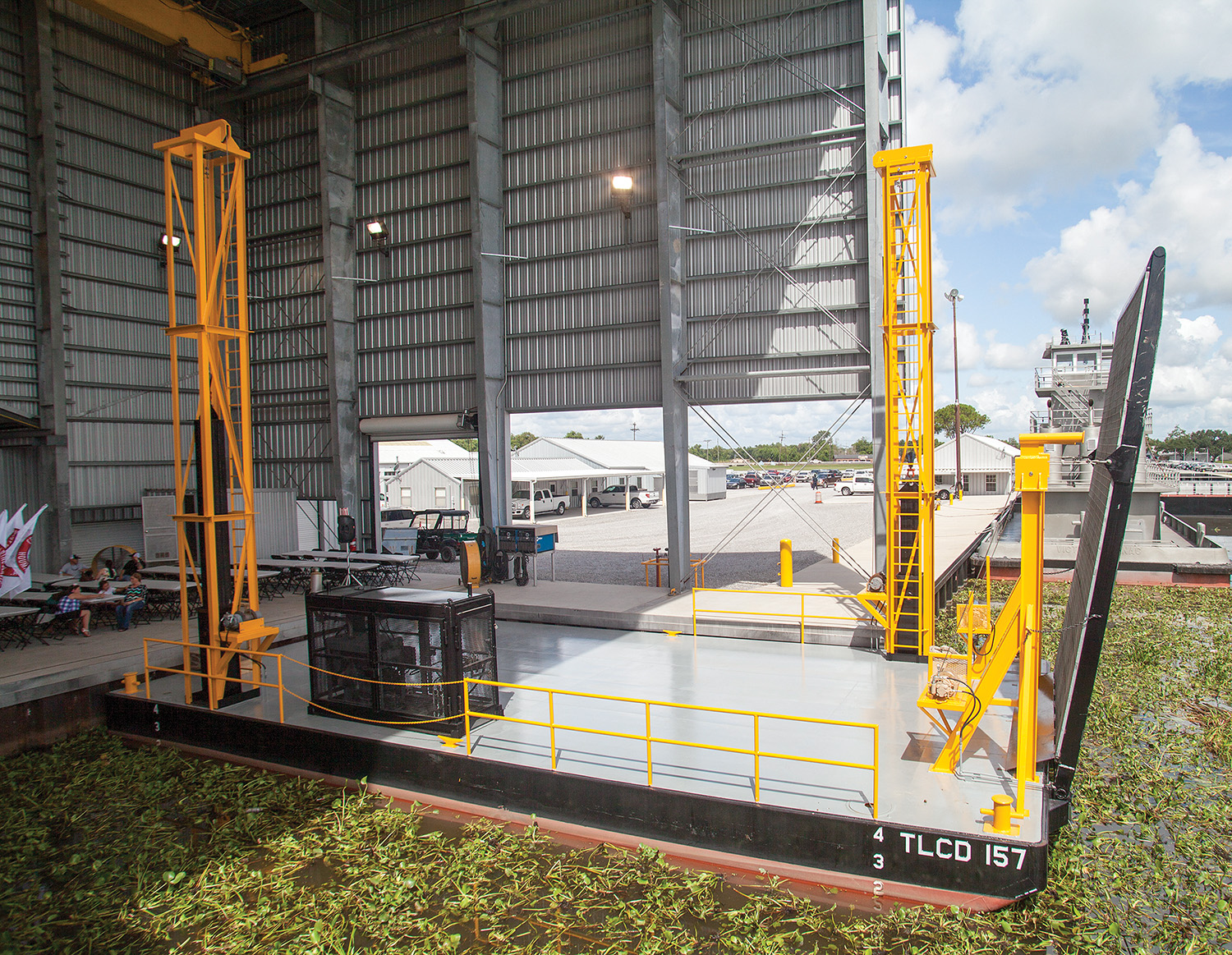 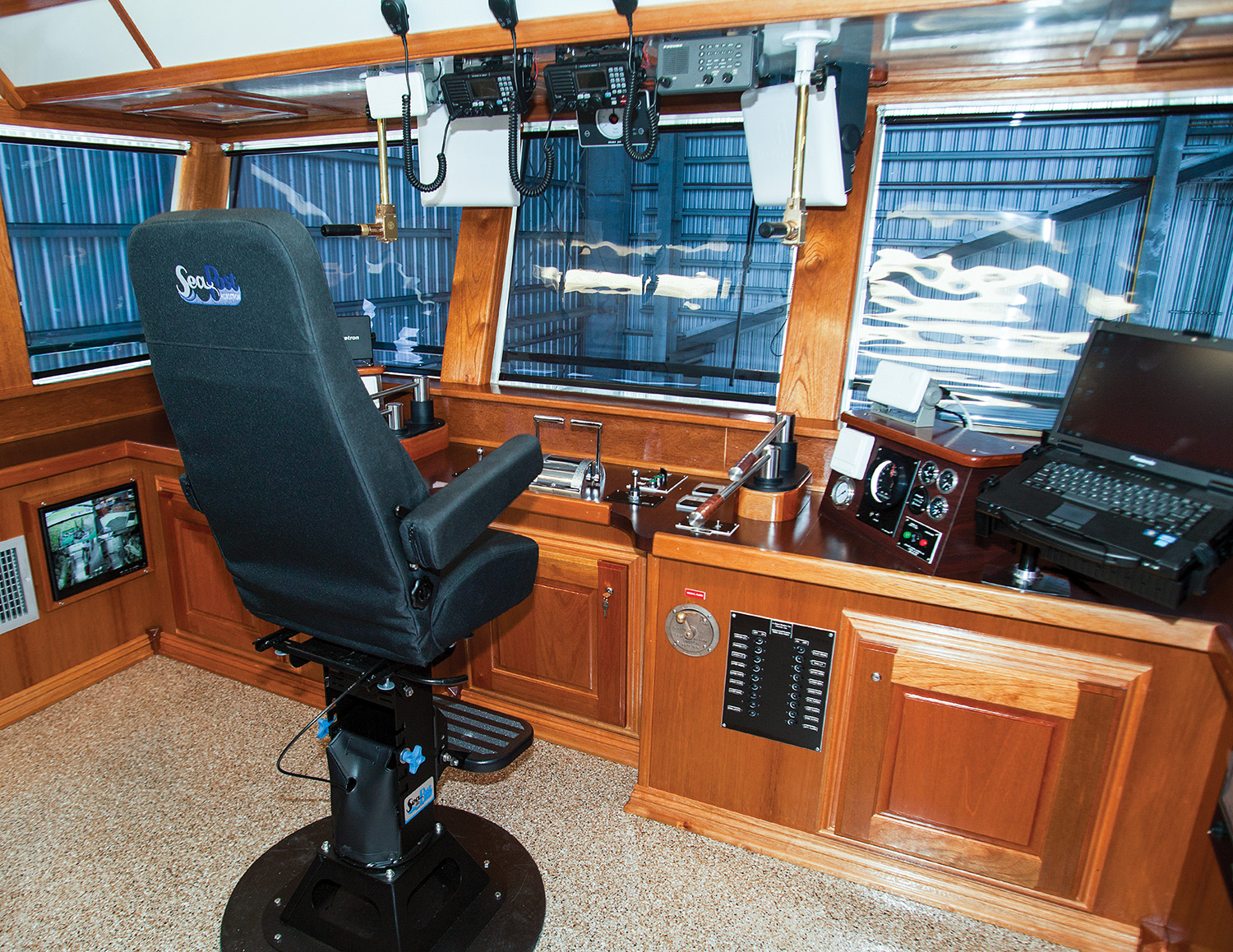 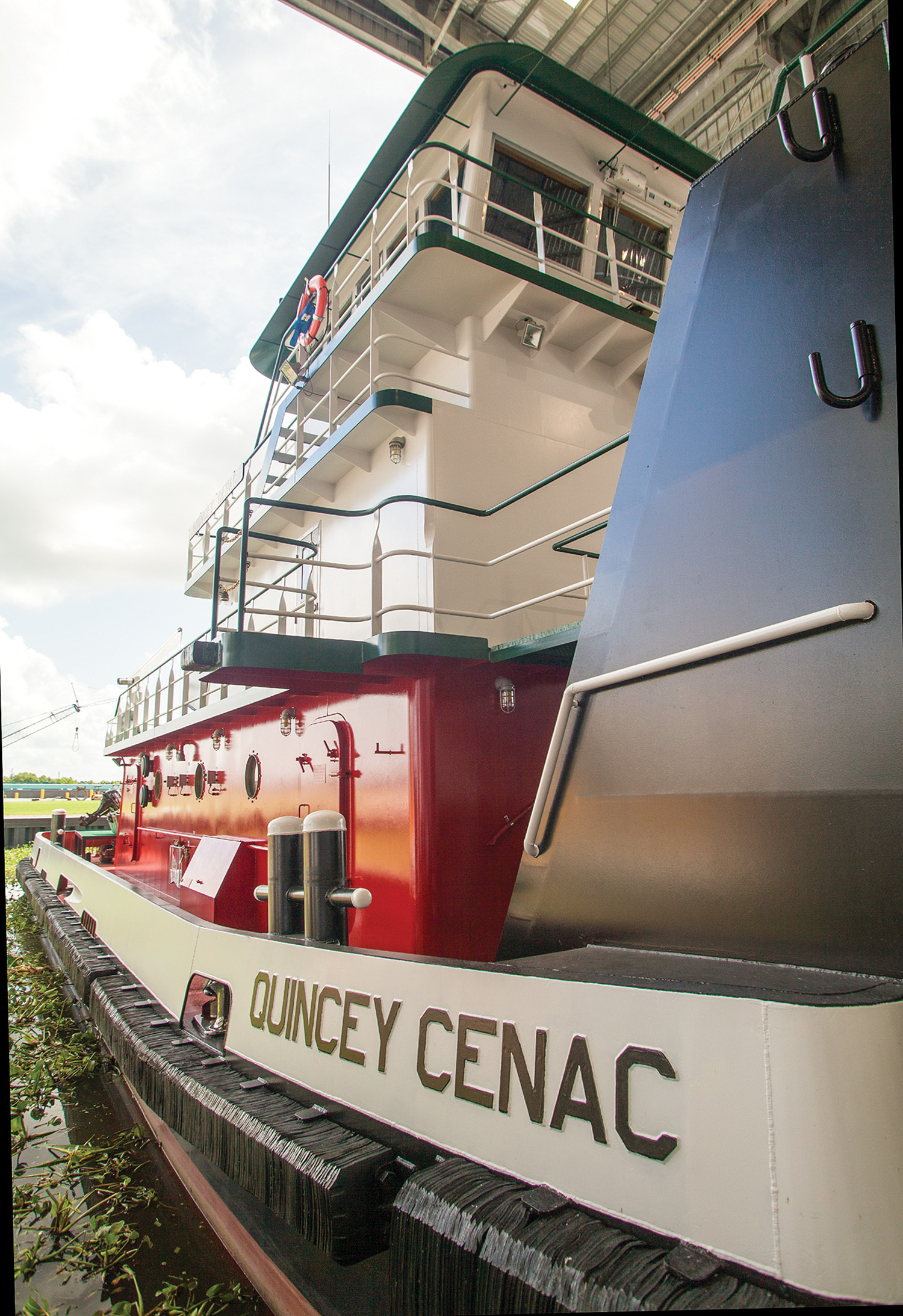