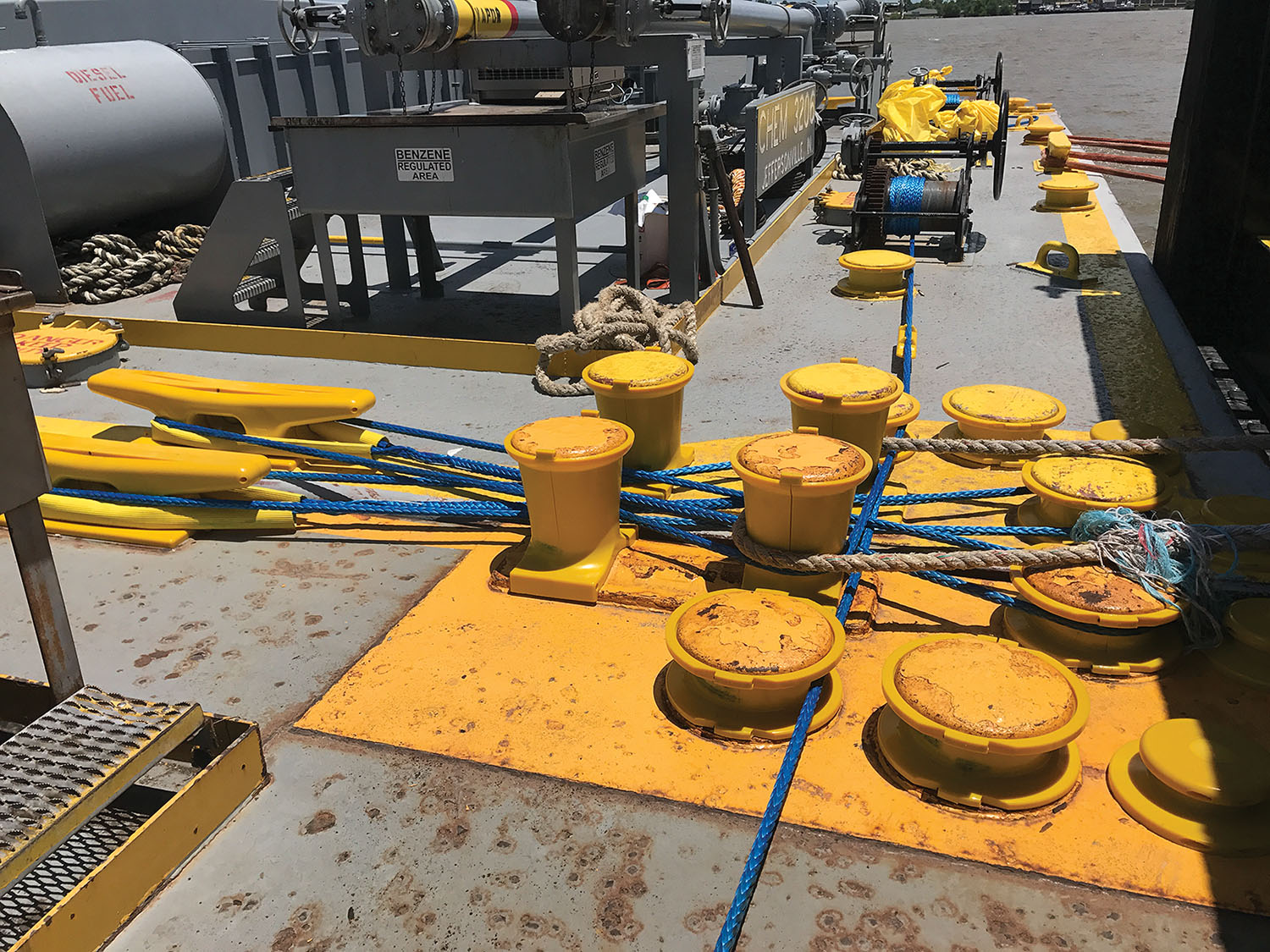 A new patented system of protective polymer sleeves for bitts, kevels and other deck gear that enables barges to use synthetic lines instead of wire rope for unit tows is further proving itself on the rivers.

The new system, developed, patented and manufactured by PEA Marine, is called the Sentry Line Saver (SLS) system by its inventor, Erik Arlet. It has been installed on two American Commercial Barge Line tank barges in the New Orleans area on a dedicated two-barge unit tow being pushed by the mv. American Skill. When The Waterways Journal spoke to its captain, Corey Buffington, it was operating north of New Orleans.

Once the SLS system and lines were installed, the unit tow was put to work in its normal Chalmette to Convent, La., run. “The conditions were less than ideal, with high water and faster than usual currents putting the SLS system and lines to the ultimate test through some tight turns and potentially higher than usual strains while steering,” Arlet told The Waterways Journal.

With the PEA system installed, the wire rope typically used on the winches has been replaced with lighter synthetic lines. Synthetic lines are preferred by deckhands over steel wire because of their flexibility, ease of handling and safety. Their one drawback is that they chafe more easily than wire rope. That is the drawback that the protective SLS system was designed to address. The system includes a series of polymer coverings and fittings that can be installed by deckhands in minutes and moved as needed.

“Until now, nothing has been developed to allow the use of synthetic lines for barge to barge connections,” says Arlet. “The PEA Marine SLS system provides a viable solution for operators to take advantage of synthetic lines that are lightweight, have extremely limited stored energy and have safer non-memory properties.”

The American Skill is powered by Z-drive units, which can increase the forces that can be transferred to the wires or lines. “This was an ultimate test for the SLS system’s durability, reliability and proof of concept,” said Arlet.

Arlet added that the SLS system eliminates the need for chafing gear, which adds cost and weight. “The material in SLS deck fitting covers never faltered, and completely protected the lines from any abrasion. Combined with the SLS system, the synthetic lines provided a safer and easier means for barge-to-barge connecting. Deckhands made each connection laying the lines as easily as tying your shoes.  The lines’ light weight (typically 87 percent lighter than wire rope) and ease of use can reduce the potential for injuries.”

Paul Tobin, senior vice president and chief operating officer of ACBL, said that in head-to-head comparisons of making up units tows with synthetic lines versus wire, the synthetic line is at least twice as fast, increasing efficiency.

The system was given an unexpected test that was not part of the original plan. “Just after the first two weeks of being installed, the discharge engine pump on one of the barges needed to be repaired, and as a result, that barge was pulled from the unit tow,” said Arlet.  The replacement barge had wire rope on its winches. The protective sleeves were originally designed for synthetic line. Nevertheless, they held up.

“Once again, the SLS system exceeded expectations,” said Arlet. “As the crew of the mv. American Skill carefully and mindfully placed the wire first then the synthetic lines, and continued their Chalmette-to-Convent run for nearly three months, only the grease from the wire marked the SLS covers, leaving them unscathed from the wire and proving that they can hold up to the rigors of wire rope if need be.”

“The system appears to be withstanding the rigors of the environment,” said Tobin. Two of the mv. American skill’s captains, Corey Buffington and Capt. Aaron Hackemack, said the system was performing as claimed and will remain in place indefinitely.