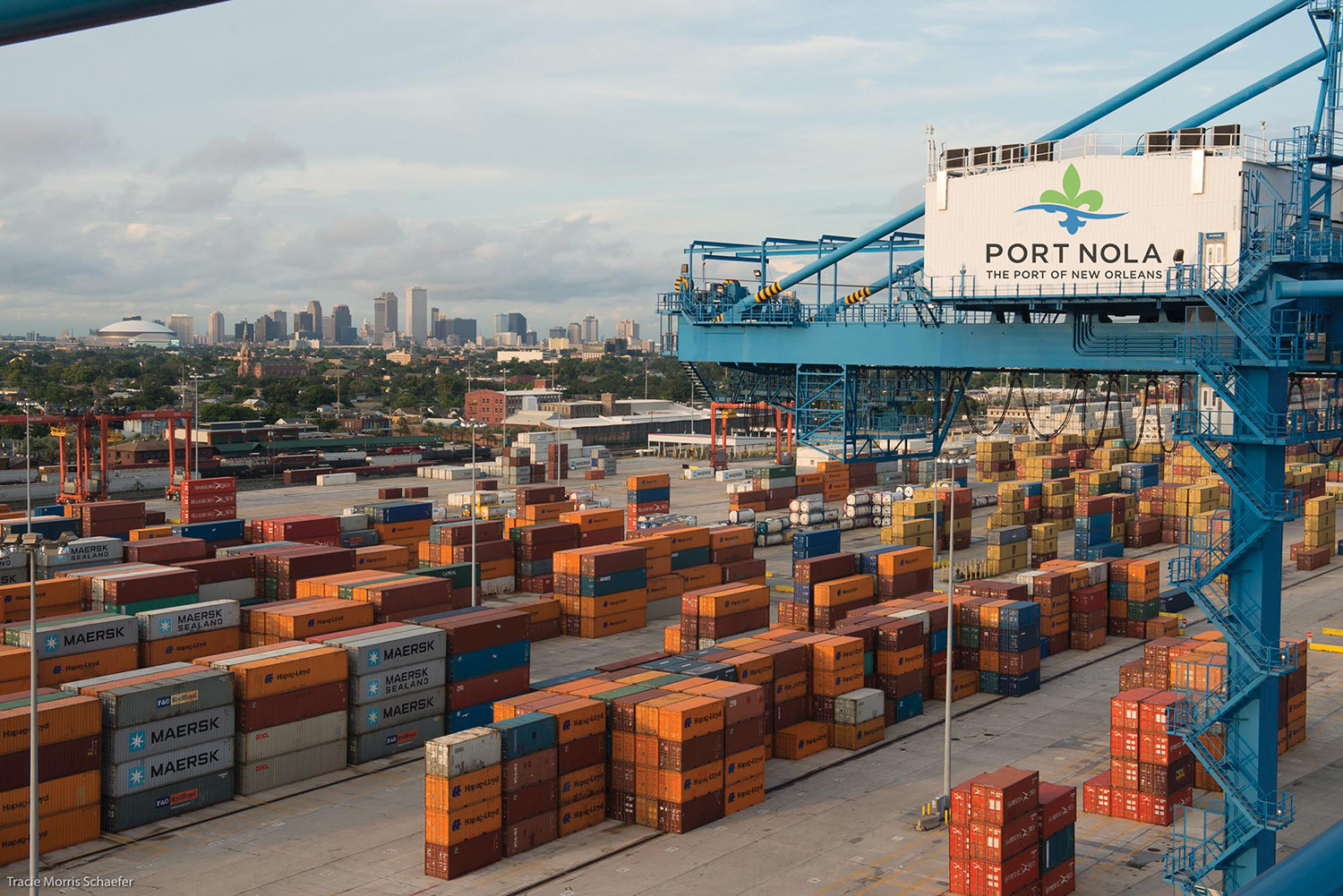 For the Port of New Orleans, 2017 was a year of both firsts and continued successes.

Dockside, 2017 was packed with milestones, new or expanded services, and increased operational efficiencies.

“We have accomplished a lot in just 12 months, thanks to the dedicated efforts of the entire team,” Christian said.

Asia, as well as to a new direct service to Brazil. For a third consecutive year, the Port of New Orleans surpassed 500,000 TEUs (twenty-foot-equivalent units) handled at the Napoleon container terminal.

Last year also saw continued growth of the Seacor AMH container-on-barge shuttle service, which brings empty containers from Memphis, Tenn., via hopper barges to Baton Rouge, La., where they are loaded with plastic resins. The containers are then moved to New Orleans and loaded onto ships for export. Since the service began in 2016, Seacor AMH has moved about 30,000 TEUs of resins aboard its hopper barges from Baton Rouge to New Orleans.

The port also made strides in breakbulk in 2017, which saw 17 percent growth over 2016. In fiscal year 2017, the Port of New Orleans imported some 2.4 million tons of steel, which the port noted is enough steel to build both spans of the Crescent City Connection bridge over the Mississippi River 50 times over.

And for the first time since 2005, the port saw roll-on, roll-off cargo exported in 2017. Bahri will continue to call on the port, enhancing New Orleans’ connection to the Middle East, India and the Mediterranean.

But the successes at the Port of New Orleans last year weren’t all visible out on the riverfront, Christian said.

“Internally, we have been just as busy,” Christian said. “[In 2017], we successfully implemented a new financial system and IT upgrades and continued to revamp our procurement process to ensure that more companies have the opportunity to work with us. We have greatly increased our outreach in the region and developed stronger ties with economic development partners; elected officials at the federal, state and local level; and community groups.”

The city, port and railroad announced the agreement in June, with the groundwork for the swap laid over the remainder of the year. Now, the port is poised to finalize the deal within a matter of weeks. Christian believes operating the New Orleans Public Belt will give the Port of New Orleans a strategic edge nationally.

“The Belt connects the six Class I railroads and the port to the national rail network, providing a significant competitive advantage that cannot be overestimated,” Christian said. “We are the only deepwater port in the United States with this level of rail connection, and we intend to maximize the asset with strategic investments and truly integrated multimodal solutions.”

Christian said the acquisition of the New Orleans Public Belt is just the latest example of how the city and port not only coexist but also collaborate for mutual success.

“The agreement between the port and the city that gave the port ownership of the Public Belt and transferred ownership of two wharves so the city could increase public access to the waterfront is a recent example of a win-win-win for collaboration,” Christian said. “Looking to the future, we will be focusing on workforce development opportunities for the betterment of city of New Orleans residents as well as those who live in Jefferson and St. Bernard Parishes.”

That symbiosis of community development and maritime commerce has spanned 300 years in New Orleans. Jean Baptist Le Moyne, Sieur de Bienville, established New Orleans in 1718 because of its location on the Mississippi River and its relative elevation along the river, which he considered sufficient to shield it from river stages and storm surge. Although the Board of Commissioners of the Port of New Orleans was founded just 122 years ago, international trade and the Mississippi River have always been the lifeblood of the Crescent City.

Inasmuch, the port will play a major role in 2018 as the city celebrates its 300th birthday.

“Port NOLA plans to celebrate the tricentennial by helping facilitate tall ships visits, putting out a publication celebrating the port’s history in the region, and with special events during our annual Maritime Month observations in May,” Christian said. “Details to come for that!”

Also early in 2018, the Port of New Orleans will unveil its master plan, which will be a roadmap for guiding the port into the next two decades.

“The plan lays out a vision for the next 20 years, with strategies for growth, including recommendations for capital investments, operational changes, policies and strategic initiatives,” Christian said. “This Gateway Master Plan will include increasing breakbulk capacity, expanding container capacity, revitalizing undervalued industrial real estate properties throughout the port’s three-parish jurisdiction and identifying strategic investments to expand the operational efficiencies of the New Orleans Public Belt railroad.”

One clear area of opportunity is Avondale Shipyard, formerly operated by both Northrop Grumman and Huntington Ingalls Industries, which has been shuttered since late 2014. The yard is located on the west bank of Jefferson Parish. Avondale Shipyard at one time was the largest employer in the state. The shipyard spans more than 200 acres and close to 8,000 linear feet of riverfront.

“While the task force is not focusing exclusively on the Avondale site, it certainly represents an enormous opportunity for increased economic impact to the parish and for additive activity on the river, so it is often discussed at those meetings,” Christian said. “The port welcomes efforts to bring Avondale back into commerce, and we have been working closely with Jefferson Parish and Louisiana Economic Development to support the new potential owner’s due diligence on the property.”

Back on the east bank in New Orleans, two bright spots for the Port of New Orleans are cruises and container movements. The Port of New Orleans’ cruise business line generates about 20 percent of the port’s revenue, Christian said, while also bringing over a million passengers to the area each year.

That’s another win-win for the port and the city, because cruise passengers often treat New Orleans as a vacation within their cruise itinerary.

“A majority of cruise passengers plan extra time in our vibrant, welcoming city before or after their cruises, staying in hotels, enjoying our restaurants, visiting nearby tourist attractions—and contributing significantly to the economic impact reported by the hospitality industry,” Christian said.

The port currently operates two cruise terminals at its Erato and Julia Street wharves. Christian said the port would consider adding a third terminal when cruise calls demand it.

“If we want to continue to grow this line of business and contribute to the region’s hospitality industry, we will need to consider an additional facility,” Christian said. “We are currently evaluating the business case from the industry perspective at a number of different locations. The Poland Avenue Wharf is currently used for overflow cargo operations and occasional port of call cruise calls. It has long been considered an appealing location for a cruise terminal due to its location downriver of the Crescent City Connection, deep draft and proximity to New Orleans attractions, and will be one of the locations assessed for more permanent cruise operations as need dictates.”

And obviously, with containers playing such a huge role in transportation globally, containers at the Port of New Orleans will be key to continued growth. Petrochemical facilities along the river between Baton Rouge and New Orleans are poised for incredible growth over the next few years, and containers will handle much of those exports.

“Experts predict an estimated growth of 400,000 TEUs of plastic resin exports from the Gulf Region between now and 2020,” Christian said.

That anticipated growth is spurring the growth of Seacor AMH’s container-on-barge service, which operates in partnership with ocean carrier CMA CGM and petrochemical companies like Shintech and Dow.

“Growth has been significant enough that Seacor AMH is considering adding a second service to its current weekly schedule,” Christian said. “In addition, Seacor AMH is working on another possible service linking two facilities within the Port of New Orleans.”

But it’s not all business for Christian. The year ahead looks to be an exciting one personally for Christian and her family. First off, the New Orleans Saints are playoff-bound for the first time since they moved to the area.

“My family and I have been here for three years now and are avid Saints fans, so I’d say that means we’re settled in,” Christian said.

“It is impossible to be bored here,” Christian said. “Whenever friends visit from out of town, I take them to Frenchmen Street, which also happens to be one of my favorite Saturday night spots, for the music and outdoor art market.

“I love the festivals and, of course, Mardi Gras,” she added. “This year I’ll be riding in Muses, so I guess that brings me one step closer to being an ‘almost local.’”