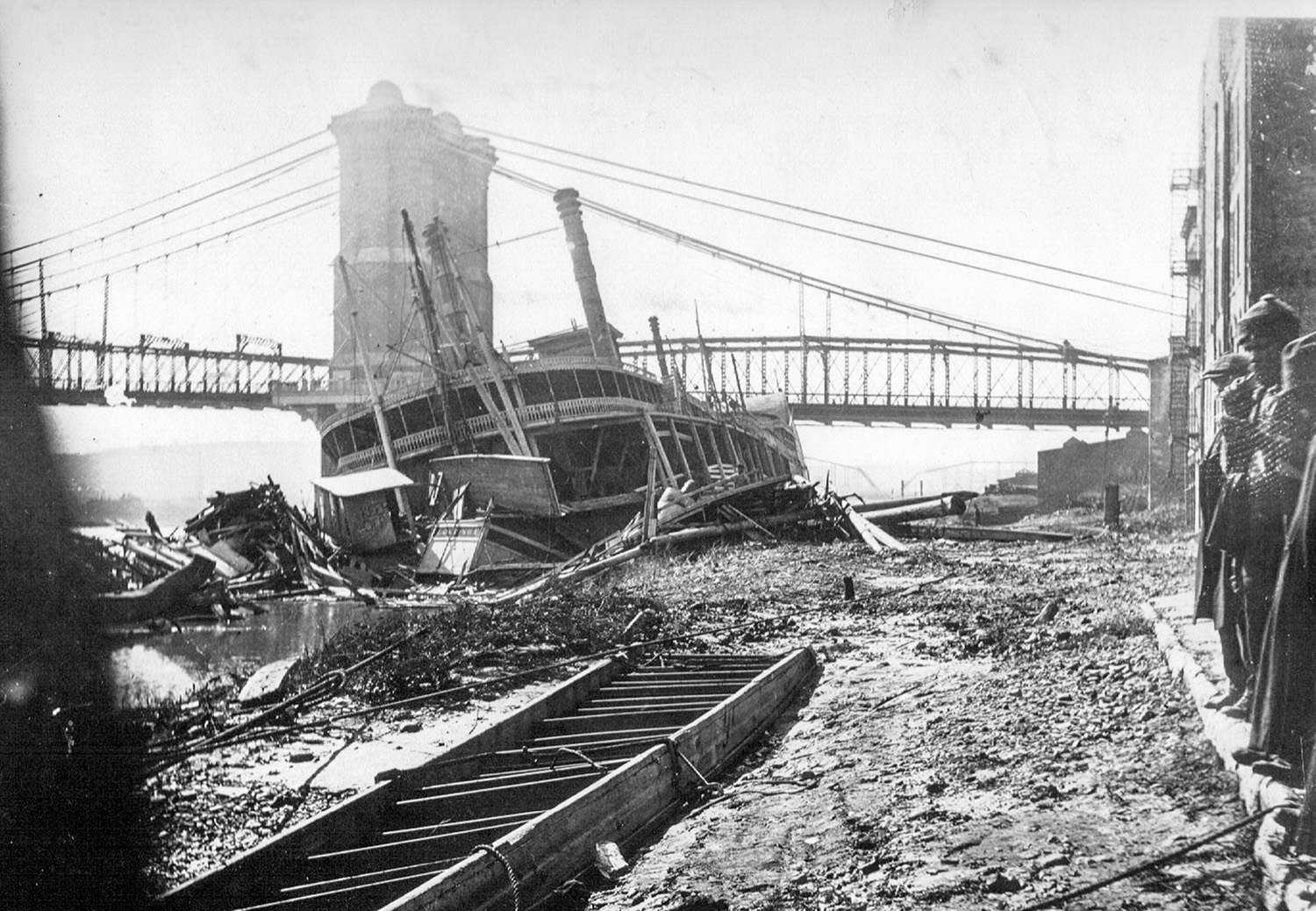 Remains of the City of Cincinnati. Visible at the bow is the pilothouse from the wrecked sternwheeler Loucinda. (Keith Norrington collection)

After observing the centennial of the 1918 Ohio River ice gorge (WJ, January 29), this week’s Old Boat Column focuses on the aftermath of the calamity that destroyed more than 35 vessels.

One of the big sidewheelers that was reduced to rubble on January 30 by the force of the ice was the beautiful steamer City of Louisville. Constructed on a wooden hull that measured 301 feet in length by 42.7 feet in width, the riverboat was built at Jeffersonville, Ind., by the Howard Shipyard in 1894; the cost was $72,500. Eight boilers (later reduced to seven) provided steam to engines—manufactured by the Frisbie Engine & Machine Company—having 30-inch cylinders with a 10-foot stroke.

When the steamboat made its debut, the Courier-Journal effusively remarked: “The Louisville & Cincinnati Mail Line Company people are very proud of their new steamer, which has been named the City of Louisville. They built the boat for the accommodation of the passenger travel between this city and Cincinnati. Capt. Ed Howard, builder of the boat, has received many compliments for his success with the splendid new steamer, which is pronounced one of the finest and fastest ever launched upon the Ohio.”

The City of Louisville had 72 staterooms, which provided a total sleeping capacity for 160 passengers. The large roof bell, adorned with antlers, came from a set of chimes featured at the 1893 Chicago World’s Fair, known as the Columbian Exposition. The whistle (recycled from the packet Fleetwood) was deep and hoarse; it later served on the sidewheel excursion steamer America, originally the packet Indiana. A miniature cannon, carried on the main deck of the City of Louisville, was fired on special occasions. The cannon is today displayed at the Ohio River Museum in Marietta, Ohio. A fine model of the riverboat, as well as a wall clock from the cabin, is exhibited at the Howard Steamboat Museum.

Famous for speed, the boat made a record run upstream to Cincinnati that has yet to be equaled. On April 18, 1894, the vessel departed Louisville at 3 p.m., and arrived at its destination in 9 hours and 42 minutes. Two years later, on April 5, 1896, the steamboat made its record downstream run in 5 hours and 58 minutes. For many years, the numbers “9-42” were painted on the pilothouse in proud celebration of the record upstream time.

During its tenure, the boat had only three masters: Capt. John Brennan, Capt. James Martin and Capt. Clarence McElfresh. The size and power of the boat demanded the skills of the best pilots of the time. The renowned riverman/historian Capt. Fred Way (1901–1992) was of the opinion that the City of Louisville was as fabled on the Ohio as the Robt. E. Lee on the Mississippi.

Despite valiant efforts by the crew of the City of Louisville, who kept steam up and the engines working ahead in a futile attempt to move the ice, the riverboat sank and settled near the Louisville & Cincinnati wharfboat. Paul Wesley Seabrook (1897–1989), riverman and later prominent funeral director of New Albany, Ind., told this writer that he was aboard a train, bound for army service and, as the train slowly crossed the bridge at Cincinnati, he sadly looked down upon the desolate wreckage of both the City of Louisville and City of Cincinnati, two of his favorite steamboats. The remains of the former river queens were dismantled and parts salvaged for use on other boats later that spring.