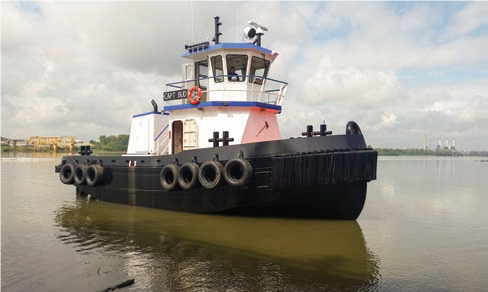 According to David Foertsch, vice president of Corn Island Shipyard, the truckable dump scows were designed by Glosten Naval Architecture & Marine Engineering. Each barge measures 78.6 by 24 by 9.8 feet and was constructed with half-inch deck, side and bottom plate, he said. The scows’ overall length exempts them from loadline regulations.

The hydraulic power unit (HPU) was provided by Supreme Integrated Technology, Harahan, La., and is equipped with a Tier 4 engine to comply with emission laws, Foertsch added. “The HPU can be operated manually aboard the vessel or by remote control to a distance of 1,000 feet,” he said.

The scows were launched at Corn Island Shipyard’s primary facility, where sea trials were performed before they were taken to the shipyard’s satellite yard in Tell City, Ind. Foertsch said the shipyard used its 1,200-ton capacity cradle marine ways to extract the scows, which were then disassembled into halves and shipped by rail to San Diego for reassembly.

“Within the hull are reservoirs for 2,150 gallons of fuel and 735 gallons of dirty oil storage,” said Foertsch, who added that the boat’s superstructure steel is 5/16-inch plate throughout.

The Capt. Bud was named after the late Corn Island Shipyard general manager, Fontain “Bud” Martin Johnson Jr., who died of complications following surgery in Indianapolis, Ind., February 4, 2017. He was 73.

Born in Helena, Ark., he came from a long line of riverboat captains and
marine entrepreneurs. His father, Fontain Martin Johnson, was captain on the Mississippi Queen and the Delta Queen. His great-grandmother, Capt. Nettie Johnson, owned and operated a steam packet on the inland waterways and was one of the first women in the United States to hold a master pilot license. She is in the Merchant Marine Academy Hall of Fame.

Bud Johnson graduated from the University of Michigan with a degree in naval architecture and marine engineering. During his last year in college, he worked for Defoe Shipyard in Bay City, Mich. After college, he worked as chief naval architect for Phillips Petroleum in Bartlesville, Okla. He went on to manage a series of shipyards and towing companies along the inland river system and the Gulf Coast, and was said to have known the bends and depths along the river system by heart and could recite them with accuracy.

At Corn Island Shipyard, where he began in 1994, he designed and oversaw construction of barges, tugs, dump scows and many blue-water vessels, some of which exceeded 4,000 tons, for clients across the United States.

“Bud was such an asset,” Don Foertsch, president of the shipyard, told The Waterways Journal last year (WJ, February 27, 2017). “He knew so much about the marine industry from his education and managing shipyards. He was always ready to take on new projects, challenges, utilizing his naval and marine knowledge. His love for the industry was known from coast to coast. He was truly a key to our success.”

For nearly 30 years, Corn Island Shipyard has quietly become known as a premier builder of custom barges and specialized marine structures. Since the launch of its first barge in 1991, the shipyard has worked to offer durable, high-quality products at a reasonable cost.

Corn Island Shipyard said it has achieved this goal by producing its vessels with a high degree of automation, employing a highly skilled workforce, and offering in-house design and engineering utilizing state-of-the-art 2D and 3D design programs. The shipyard has produced custom marine vessels for customers on the East, West and Gulf coasts, and in most states on the inland waterway system.

The company specializes in the manufacture of custom-designed products for both ocean service and inland waterway service. The shipyard produces vessels that are classed ABS, as well as unclassed vessels based upon its customers’ requirements. Corn Island Shipyard currently has the capacity to build vessels up to 600 feet in length and 108 feet in width, according to the company.