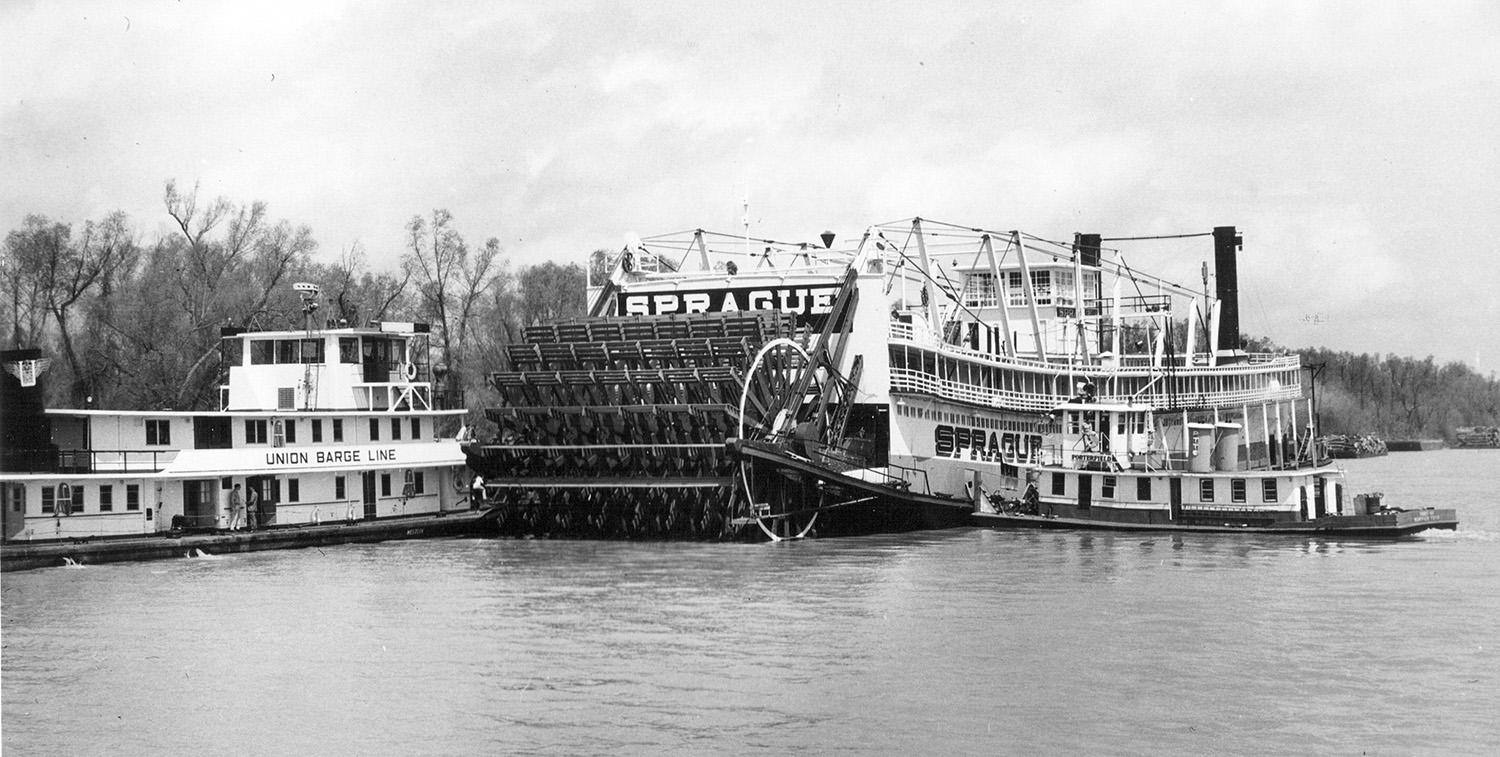 Nearly six decades ago today, on March 26, 1959, the 318-foot long steamer Sprague embarked on a journey from Vicksburg, Miss.

The retired riverboat became a tourist attraction in 1948, after it was decommissioned by Standard Oil Company and sold to the southern city for the sum of one dollar. The largest towboat ever built offered guided tours, a 500-seat showboat theater and the River Hall of Fame, which contained portraits, photographs, models and other memorabilia.

In 1959, the city of Pittsburgh, Pa., celebrated its bicentennial and arranged to borrow the Sprague for the festivities. To prepare for the momentous event, over $100,000 was spent on renovations and repairs. The Vicksburg firm of R.G. Le Tourneau designed a unique electrical motor and gear device that made the engines and sternwheel move slowly for demonstrations to visitors.

Union Barge Line (UBL) was entrusted with towing the Sprague on this 1,500-mile journey up the Mississippi and Ohio rivers. The first segment of the trip was undertaken by the Western, built by Dravo Corporation at Neville Island, Pa., in 1956. At Louisville, the UBL towboat Lehigh (built in 1945) took over for the remainder of the trek. Upon arrival, the Sprague’s first stop was the Dravo yard for two week’s worth of finishing touches, before it was moved by the UBL towboat Reliance (on April 28) to a landing near the confluence of the Allegheny, Monongahela and Ohio rivers.

Thousands of visitors toured the Sprague throughout the summer and fall months until November 5, when the UBL towboat Western, in command of Capt. Robert Lips, departed with the famous old sternwheeler for its return to Vicksburg, making a round-trip totaling 3,000 miles.

Built in 1902 at Dubuque, Iowa, the Sprague was constructed by the Iowa Iron Works for the Monongahela River Consolidated Coal & Coke Company at Pittsburgh. The steel hull measured 276 feet in length by 61 feet in width. The sternwheel originally was 40 feet in diameter, but was later reduced to 38 feet to increase revolution speed. Condensing engines, also built by Iowa Iron Works, had cylinders of 28 and 63 inches, with a 12-foot stroke. The pilothouse, measuring 26 by 20 feet, contained a pilotwheel 13-1/2 feet in diameter, reportedly the largest ever installed on a steamboat.

Famous for handling immense tows, the Sprague moved 67,000 tons of coal from Louisville to New Orleans on 60 barges in 1907. During the infamous Mississippi River flood of 1927, the mammoth towboat pushed empty barges to crumbling levees at Greenville, Miss., evacuating thousands of people and animals to refugee camps.

In retirement, the Sprague remained a prime tourist attraction at Vicksburg for a quarter century, until April 15, 1974, when the vessel was destroyed by fire.

In this week’s Old Boat Column image, the Sprague is being maneuvered from its Yazoo River mooring by the towboats Western and Porterfield. Constructed in 1928 by the Howard Shipyard at Jeffersonville, Ind., the Porterfield originally was a sternwheeler. Owned by Patton-Tully Transportation Company of Memphis, the vessel was converted to twin propellers in 1946. Following a fire at Vicksburg in 1953, the towboat was rebuilt the following year and the propulsion changed to triple props.