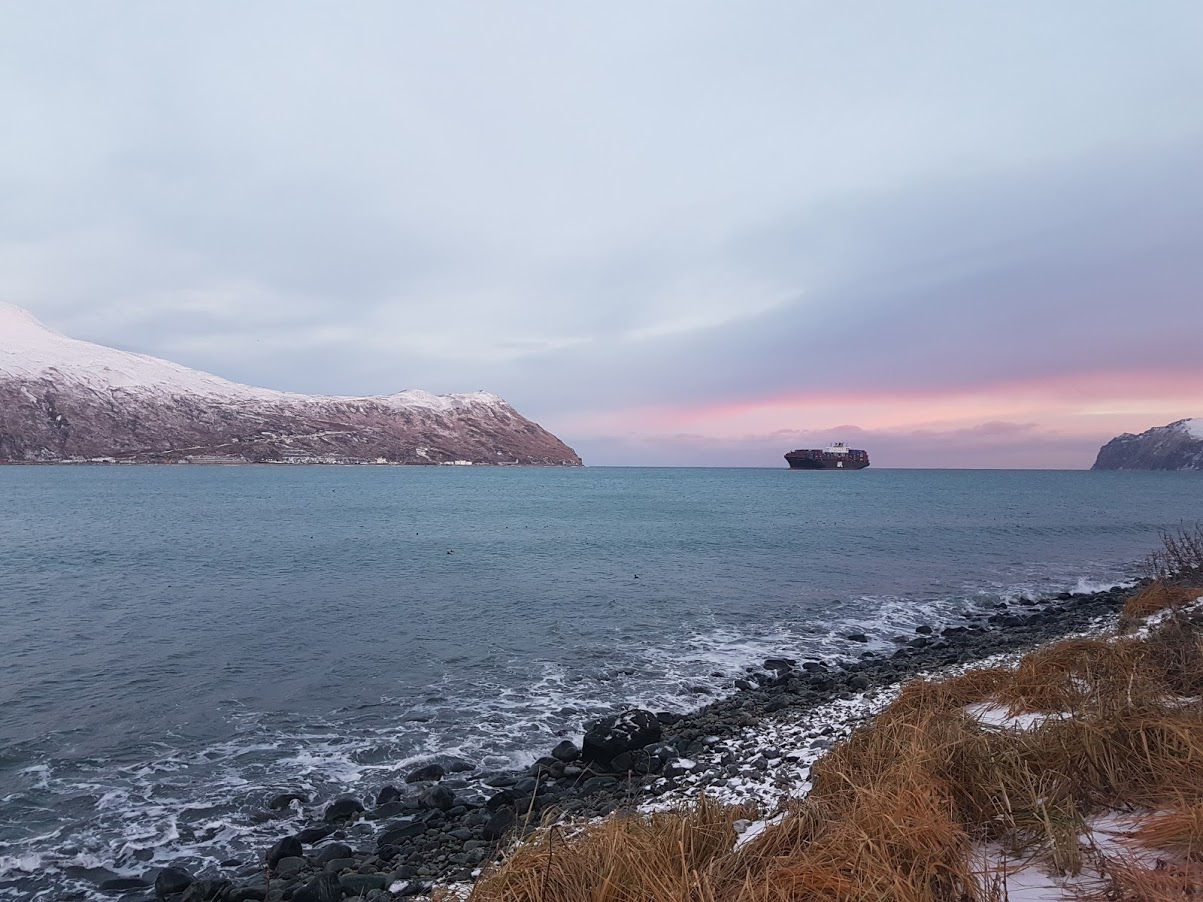 The U.S. Army Corps of Engineers Alaska District is preparing a Draft Integrated Feasibility Report and Environmental Assessment for the Unalaska Channels, also known as Dutch Harbor. The study evaluates whether deep draft navigation improvements are feasible at this location and the benefit cost ratio. The Unalaska Channels project would dredge a bar at the entrance to Illiuliuk Bay to 48 feet. The bar is preventing deep draft vessels from entering the harbor.

The City of Unalaska is located in the Aleutian Islands. Dutch Harbor is a port facility on Amaknak Island within the city. Dutch Harbor is the only deep draft, year-round ice-free port along the 1,200-mile Aleutian Island chain. It is the operations center for the Bering Sea commercial fishing fleet and encompasses the three major terminals of Unalaska Marine Center, the American President’s Line Dock and Delta Western Fuels that all serve deep draft ships.

The Main Project
Vessel traffic is restricted at the Port of Dutch Harbor to one large ship movement at a time in the port, in any direction. The depth at the bar is -42 feet Mean Lower Low Water (MLLW), while the surrounding natural depth of Iliuliuk Bay is -100 feet MLLW.

The feasibility study determined that deepening the bar to -48 MLLW would provide access for vessels with drafts up to 44 feet and would require dredging approximately 27,540 cubic yards of sediment at a cost of approximately $15. 8 million. According to Bruce Sexauer, chief of Civil Works Branch, U.S. Army Corps of Engineers Alaska District, who is overseeing the feasibility study, a ship simulation was conducted in February 2018 to aid in calculating an appropriate clearance for vessels. However, the final depth need is still being assessed with more information required on type of bottom, sand or rock, normal and storm induced wave action, and typical boat traffic, Saxauer said.

The feasibility study examined dredging to varying depths between 46 feet and 66 feet and between 12,000 cubic yards and 333,2000 cubic yards of sediment. The plan to deepen the bar to -48 MLLW had a Benefit-to-Cost-Ratio (BCR) of 2.7 and was determined to provide the maximum total net value. The cost for this project would be split between the federal government covering approximately $9 million and the City of Unalaska, Alaska paying approximately $7 million.

Maintenance Dredging
To estimate maintenance dredging needs, the feasibility study examined the bathymetry of the area using several previous National Oceanic and Atmospheric Administration (NOAA) surveys. The earliest survey was from 1934 and showed the bar depths at 42 to 48 feet with depths next to the bar of 66 feet or more. NOAA surveys in 1991 and 2011, are being compared to a marine geophysical survey by eTrac completed in 2017 to estimate how quickly the area silts in or would require dredging.

“The NOAA survey was very important to our understanding of the type of area we’re dealing with. We’re still calculating correct depth and maintenance needs, but we estimate dredging needs to be minimal with this cobbly, compacted type of material,” said Sexauer.

To determine the sediment composition, conditions were sampled visually with the use of a submersible camera attached to a trawl net during fish sampling tows. The bar consisted of consolidated glacial moraine made of clay, silt, sand, gravel, cobbles and boulders. This solid material would need to be broken by drill and blast procedures, and then excavated by clamshell or backhoe. The material would be placed on a split hopper barge and transported to an offshore disposal site. The Corps is still studying the amount of rock present to determine how much will need to be blasted.

Further Research Required
The Corps is also still studying the disposal site options to determine the most practical alternative with the least environmental impact, however, Sexauer indicated there was not a tremendous amount of difference in the locations that all sit offshore between the harbor and Summer Bay at depths from 120 to 200 feet. “Outside of Dutch Harbor there are several locations with not much going on. Our bringing in materials will introduce complexity where none exists now, so it’s really a beneficial use of the dredged materials,” said Sexauer. The deposited sediment will help build habitat for Sea Pens, which are colonial coral that grow up to five feet tall.

The dredging may be complicated by the presence of munitions and explosives of concern (MEC). Both unexploded ordnance (UXO) and discarded military munitions (DMM) were suspected during a geophysical survey. The presence of MEC’s is common in Alaska as the state has been home to military training operations, as well as a site that was actively bombed during World War II. Not only have munitions been found at other projects, but also material like left over cabling or even old vessels. The Corps conducted magnetic surveying of the area and provided data to Naval Facilities Engineering Command, who will analyze the findings using algorithms to clarify if any ferrous targets are MEC. If any seafloor targets are of concern, an underwater vehicle will be set out to observe and better characterize the targets. This would occur during the Pre-Engineering and Design Phase. Overall, Sexauer said the majority of what was found was well outside the dredge pyramid. He doesn’t anticipate anything will deter or even delay the dredging project. If anything suspicious is found the Navy will be brought in to determine what actions need to be taken.

Next Steps
With the public comment period closed, Sexauer said, there has been little controversy over dredging Dutch Harbor, and the community is in favor of the work.

The Corps is now working to finish design features, figure appropriate methodologies and reaffirming cost projections. The final feasibility report and district approvals are expected for late 2018. The project plan will then be sent to Congress for authorization and then funding appropriation sometime in the summer of 2019.