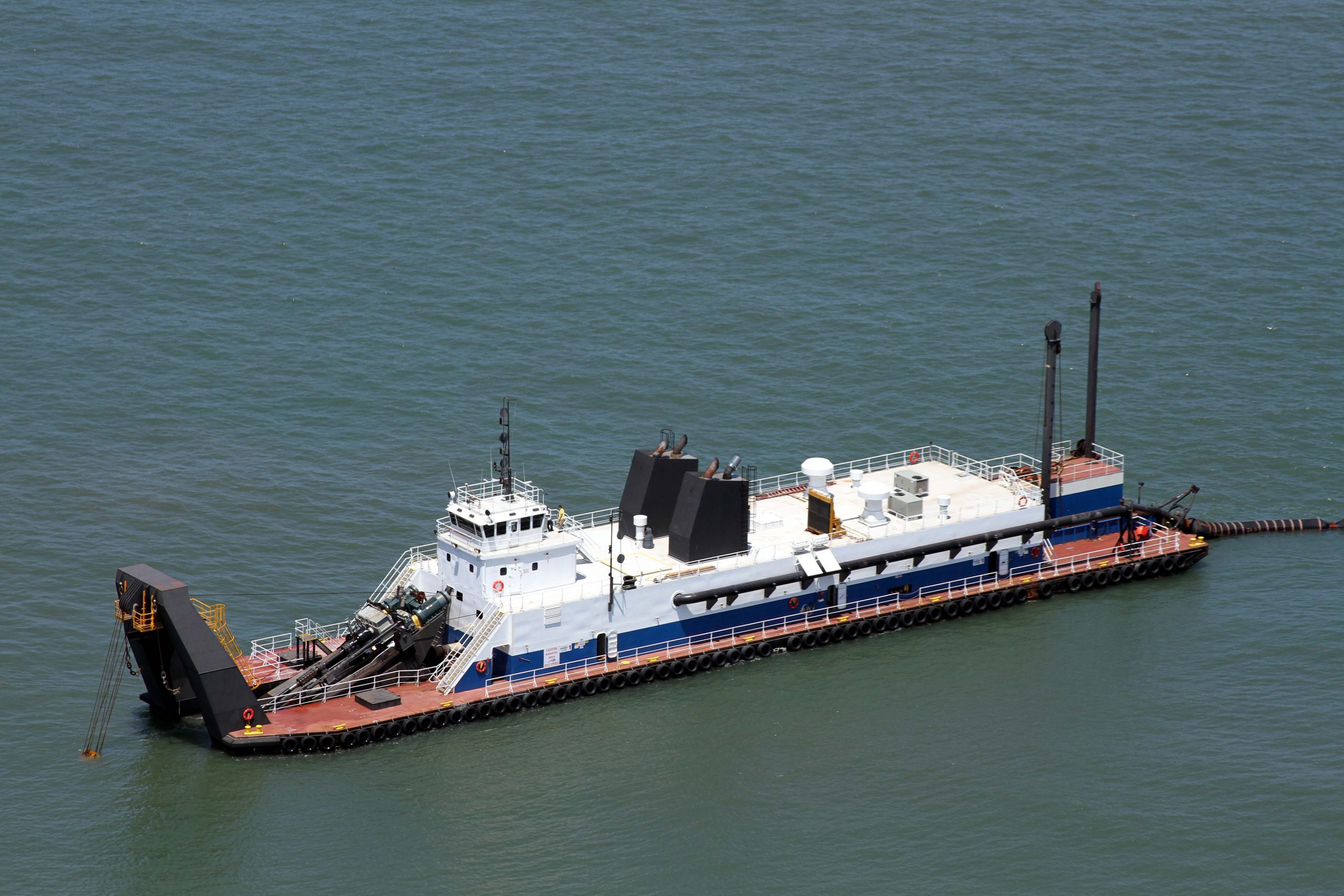 Marinex Construction has begun mobilizing for the Folly Beach (South Carolina) Shore Protection Project, in an area that was badly eroded by three hurricanes, including Joaquin in 2015, Matthew in 2016, and Irma in 2017.

The Corps of Engineers Federal Emergency Beach Rehabilitation Funding will pay for the $11 million contract, administered by the Charleston Engineer District.

The City of Folly Beach is the non-federal sponsor for the project.

Wes Wilson is the Charleston District project manager for the job, which rehabilitates a 2.5-mile section of the beach with the purpose of protecting the residents and infrastructure of the island. The width of the restored beach varies because the high tide line moves, he said. The engineers designate a template that will create enough beach to protect the houses. Some areas will require less fill than others, he said.
Approximately 13,000 linear feet of shoreline will be re-nourished, starting at 8th Street East and ending at the groin beyond the last home on the east end of the Project, Wilson said.

The profile will include eight-foot-high storm berms that will be enhanced with fences and vegetation by the City of Folly Beach, designed to capture sand and create dunes.

On April 25, Kelly Albers, president of Marinex, said, “Marinex Construction is currently preparing pipeline and will commence installation at Folly Beach within the next 10 days. We will start the project with approximately 18,000 feet of line and will eventually be pumping on a total of 31,000 feet. The pipeline route will start at the borrow area in Folly River near Bird Key and run along the river toward the Washout (an area at the northeast end of the island that sustained severe damage during Hurricane Hugo in 1989.)

A side contract to maintain a section of the Folly River Federal Navigation Channel was performed in March by Southern Dredging Company using the 24-inch dredge Cherokee to place 40,000 cubic yards of sand on Bird Key Stono Seabird Sanctuary, a small island off the southwest end of Folly Island.

The City of Folly Beach is the non-federal sponsor for the project, which was initially constructed in 1993 and re-nourished in 2014.

THE HURRICANES
Hurricane Joaquin was centered in the Caribbean, where it caused severe damage in late September/early October 2015. It never reached the shores of the U.S., but a large storm system over the southeastern states drew enormous moisture from the hurricane, focusing what was called “a firehose” of water on South Carolina, nearly 20 inches of rain from October 3 through 8, with the Charleston region hit the worst of all. Prolonged erosion from the storm caused a volume loss of 212,213 cubic yards of sand from Folly Beach — approximately 39 percent of its project design — less than 1.5 years after re-nourishment. In addition, losses included the 8-foot storm berm at every profile, the loss of federal vegetation, the loss of federal sand fencing, and in some cases, loss of the dry beach. But the losses were not significant enough to qualify for federal emergency rehabilitation funding at that time.

In late September 2016, Hurricane Matthew developed in the Caribbean, intensifying to hurricane Category 5 status on October 1, 2016, when it began tracking toward the north. It weakened to Category 2 status on October 8, 2016, while located offshore of the Florida/Georgia border. It paralleled the Georgia and South Carolina coastlines, making landfall as a Category 1 storm near McClellanville, South Carolina, 53 miles north of Charleston and Folly Beach, re-emerged offshore just south of Myrtle Beach, as a Category 1 storm, and moved along the North Carolina coast, while transitioning to extra-tropical status.

In its passage past Folly Beach, Matthew completely eroded the 8-foot berm in some areas of Folly Island, specifically from 8th St. East to the northeastern limit of the project. Rehabilitation from Hurricane Matthew impacts was approved under PL 84-99 in April 2017, but prior to initiation of the Matthew rehabilitation, Folly was impacted again by Hurricane Irma in mid-September 2017.

Hurricane Irma made landfall along the Southwest Florida coast as a Category 3 hurricane on September 10, 2017, and traveled northward, impacting shorelines along the south Atlantic coast from Florida through the Carolinas. Significant beach erosion and scarping of the primary berm occurred along most of the Folly Beach project shoreline. The Corps assessment of the damage stated: “The project is below its authorized level of protection. Absent rehabilitation, public and private infrastructure is vulnerable to damage and the life and safety of residents and visitors is at risk.”

After Irma, the Charleston District performed an assessment of the damage and presented its findings to the Chief of Engineers, who authorized emergency rehabilitation pursuant to the Flood Control and Coastal Emergency (FCCE) Act (P.L. 84-99). Along with this application was a report on the Grand Strand area of Myrtle Beach, 100 miles northeast of Charleston, which had also sustained damage from Hurricanes Joaquin and Matthew, and was undergoing emergency rehabilitation in 2017 when Hurricane Irma hit. Contractor Great Lakes Dredge & Dock removed all its equipment from Myrtle Beach, to wait out the storm, and returned to complete the project to re-nourish North Myrtle Beach and Garden City/Surfside ahead of schedule on October 31. Damage from Irma qualified the Myrtle Beach project for further FCCE Act funding, along with Folly Beach.

“The Myrtle Beach re-nourishment contract for 2018 has yet to be awarded, thus doesn’t have a projected start date. We are unsure on the exact timing of the re-nourishment in Myrtle,” Wilson said.

The district issued solicitation GROUP4-18-R-C001, for rehabilitation of Folly Beach, with a response date of November 10. Twelve contractors responded with bids, and Marinex Construction was awarded the contract for $10,879,261 on December 7, 2017. The contract number is W912HP-18-F-0002.

The City of Folly Beach will remove six timber groins and replace them with rock and concrete structures in a separate project as the re-nourishment progresses.

The Charleston District developed a real-time tracking of the project on its website, to allow the public to monitor which sections of the beach are closed to the public, while sand is pumped in and graded. The site was inaugurated for the Myrtle Beach project in 2017 and is online for the Folly Beach project this year. The website is: https://cesac.maps.arcgis.com. Click on “Folly Beach web mapper.”