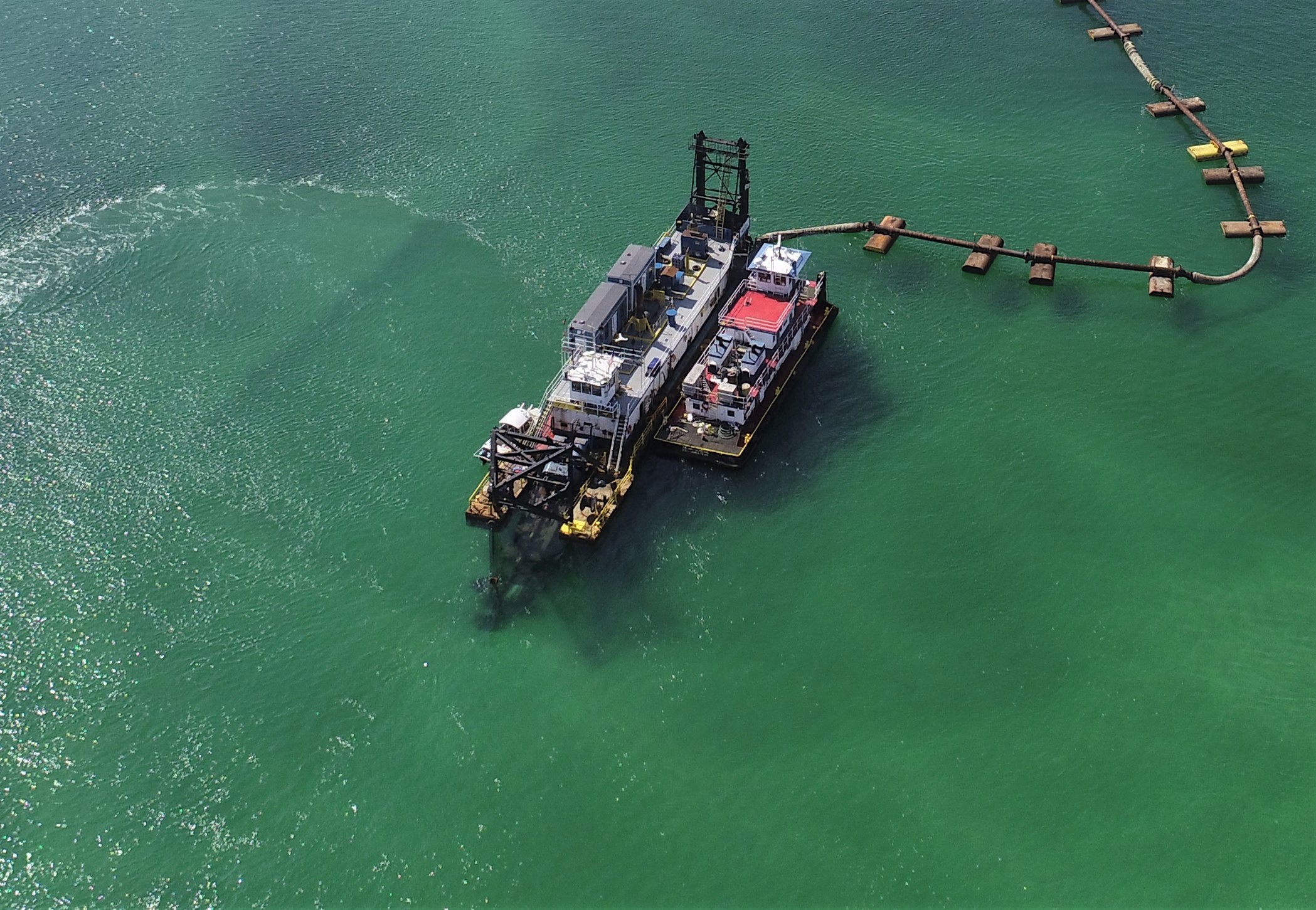 In March 2016, The U.S. Army Corps of Engineers Headquarters officially instructed its dredge quality management (DQM) team at the Mobile District to take steps to monitor all industry and government pipeline dredges having a discharge diameter greater than 18 inches.
The beginning date was set for the summer of 2018. The program managers certified the DQM systems on two industry dredges this spring, and those contractors were awarded the first two contracts specifying the systems.

“Implementation (of the pipeline DQM program) is going well,” reported Vern Gwin, DQM project manager at the COE Mobile District, in April.
The systems collect operational data from a range of systems on the dredge and send it to the DQM office at the Mobile District daily.
The certified dredges are the 24-inch dredges Kelly L and Savannah, belonging to Inland Dredging and Marinex Construction, respectively.
The Kelly L began work on the Gulf Intracoastal Waterway (GICW) 2018 rental project the morning of April 26 on a shoal at Pensacola, Florida. The year-long contract involves removing shoals as needed from the GICW, the Tennessee-Tombigbee Waterway, and the Black Warrior River. This is the first official use of the DQM on a pipeline dredging job, though the dredge has been transmitting data unofficially for several months to test the system.

Certification involves determining that the installed system, instrumentation and calibration meet the specifications outlined by the DQM program. The Corps team visited the Kelly L at Bayou La Batre, Alabama, this spring, and observed its DQM system during a trial run.
The system passed with flying colors, Gwin said. Its system was a joint effort of Inland Dredging employees and Steve Sonye of Industrial Logic Systems, who wrote the code, combining data from seven sensors and formatting it for transmission to the DQM center in Mobile.
A DQM representative certified the system on the Savannah in March.

“We are working with other companies to certify their dredges in anticipation of upcoming contracts. Other contractors are installing the systems and sending test data to the DQM center at the Mobile District, so that their systems will meet the requirements when they sign up for certification,” Gwin said.

The DQM program presents a new view of dredging data for the Corps, Gwin said. “We can look at the data, look at the projects, and verify that they are dredging in the right place, and pumping to the placement site, and verify the plant’s effectiveness,” he said.
The office is receiving calls from all over the country asking for the latest DQM specifications, Gwin said. “I direct them to the website: DQM.USACE.ARMY.MIL where all the details of the program are described,” he said. The site includes an informational manual describing how the instrumentation already in place on the dredge meets the minimum data reporting requirements of the specification.

“We’ll be generating verifiable documentation of contractor and environmental compliance in a standard system,” he said, collecting documentation on cost estimates, award amounts, dredging needs, according to historical dredging actions, the dredging history of a location, and the amount of dredging incurred because of hurricanes, droughts and floods.

“In this way, we can anticipate dredging needs and adjust budgets accordingly,” Gwin said.
Internally, dredging companies can use the data to increase their own efficiency, “like a sports team looking at game films,” Gwin said, such as comparing day vs. night shifts.

The archived data on specific projects will be publicly available to contractors preparing bids for those projects and conditions.
However, internal company information, which is protected by proprietary laws, is not released to the public, Gwin said.
The DQM team discussed with industry the level of monitoring the program would perform and came to a reasonable agreement, Gwin said.

Moving forward, DQM will be finalizing the specifications to include DQM in all pipeline dredging contracts.

All dredge types are now in the DQM program.