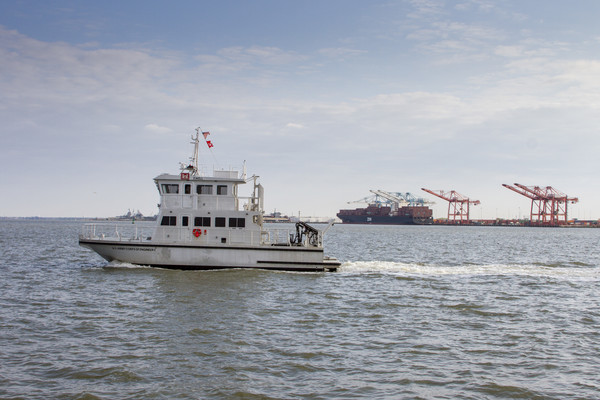 The U.S. Army Corps of Engineers Norfolk District has added a new survey vessel to its fleet. Ewell is a 61-foot catamaran outfitted with the latest multibeam SONAR technology and a crane capable of lifting 4,500 pounds. The vessel has a dual-purpose of performing both as a survey vessel and marine debris removal vessel.

“The Ewell has a unique capability in that it is outfitted equally well for both our hydrographic survey and marine debris removal mission,” said Scott Titus, Norfolk District port engineer. “The sonar suite is arranged to allow both survey data collection and initial processing while on the job site, increasing productivity.”

The Ewell will be the fastest boat in the fleet with its 1,970 hp twin-engine taking the vessel to top end speeds of 34 knots. The speed of the vessel will give survey crews more time to collect data increasing the overall efficiency of survey projects.

The Ewell is named for Donald Ewell, a former district boat captain who guided the district vessel Chesapeake, later named the Adams, from the 1960’s until his retirement in 1985. Ewell captained the Adams at a time when Automated Hydrographic Surveying was just being implemented.

He served in the U.S. Coast Guard for four years prior to his employment at the Norfolk District.

The commissioning ceremony took place on May 31 at Fort Norfolk, with dignitaries from the port community as well as Mr. Ewell’s family in attendance.