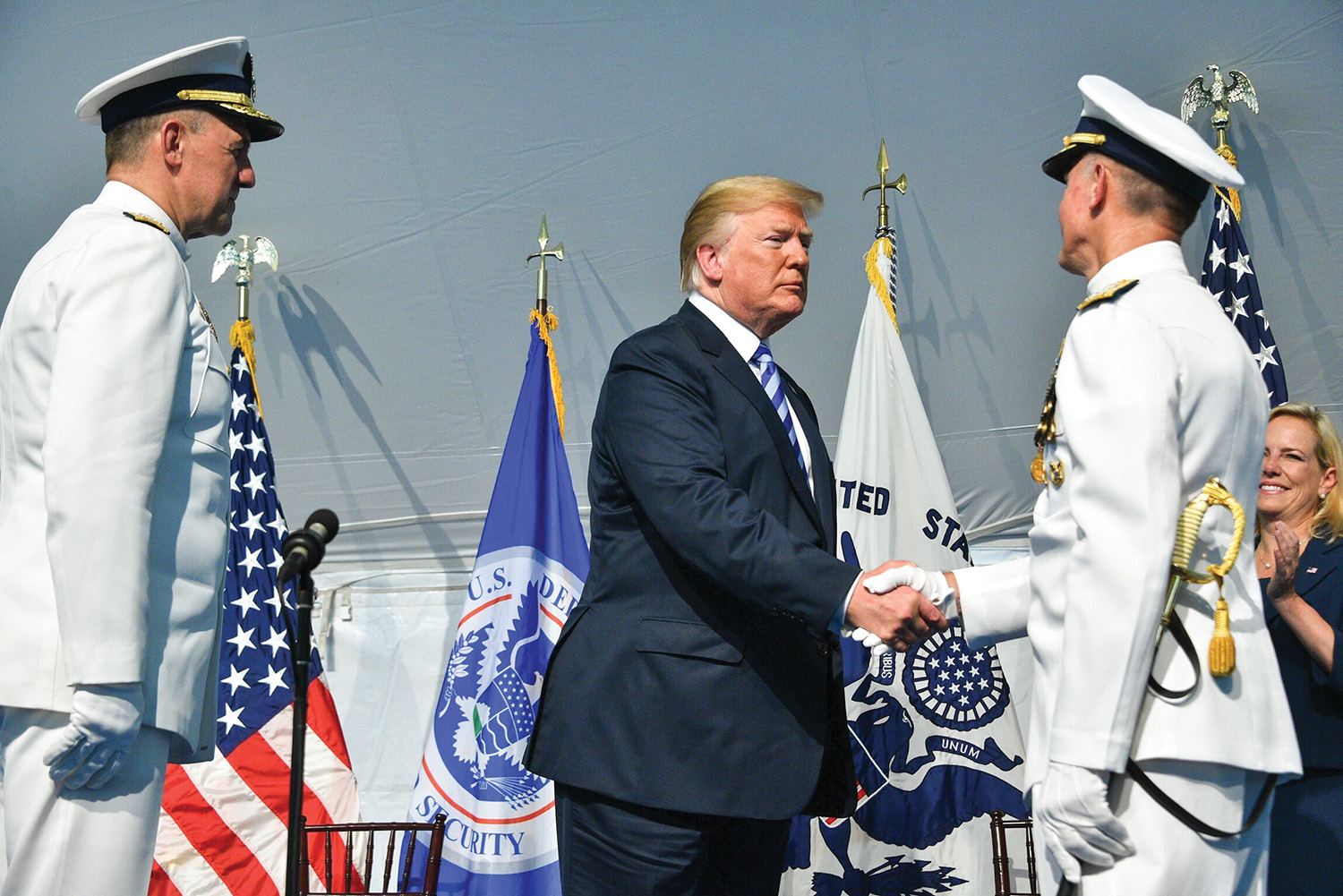 The U.S. Coast Guard is under new leadership following the June 1 change of command ceremony, held at the Coast Guard’s headquarters in Washington, D.C., during which Adm. Karl Schultz relieved Adm. Paul F. Zukunft to become the agency’s 26th commandant.

As part of the same ceremony, Zukunft retired from the Coast Guard after having served 41 years. President Donald J. Trump, who presided over the ceremony, awarded Zukunft the Homeland Security Distringuished Service Medal for his service and leadership spanning more than four decades.

“We are here to mark a change in command of the United States Coast Guard and to celebrate the incredible career of its 25th commandant, Adm. Paul Zukunft,” Trump said. “On behalf of the American people, I thank you for a lifetime of noble service. Congratulations on everything you’ve achieved.”

Most notably, Zukunft led the Coast Guard through the 2017 hurricane season, where Coast Guard men and women aided in the rescue of people impacted by hurricanes Harvey, Irma and Maria.

Addressing the crowd, Zukunft thanked the president for his administration’s support of the Coast Guard.

“Truly, Mr. President, you honor the men and women of the United States Coast Guard serving around the world today as 2018 was the largest appropriation ever for the Coast Guard,” Zukunft said. “But it’s not about the money or the platforms, it’s the people who serve in them. The work they do could not be more relevant. We couldn’t do our job without them.”

Schultz transferred to the Coast Guard’s headquarters from Portsmouth, Va., home of the command of the Coast Guard Atlantic Area, which covers a huge area stretching from the Rocky Mountains to the Arabian Gulf and spans 14 million square miles. Schultz had commanded the Guard’s Atlantic Area since August 2016. Vice Adm. Scott Buschman now commands the Atlantic Area.

Schultz’ prior flag officer assignments were commander of the 11th Coast Guard District, where he was responsible for multi-mission operations from California to Peru, and director of governmental and public affairs at Coast Guard Headquarters in Washington, D.C., where he was responsible for external engagement with Congress, the media, and inter-governmental entities.

In a recorded message to the roughly 56,000 active duty, reserve and civilian Coast Guardsmen and 24,000 Coast Guard auxiliarists, Schultz summed up his command in three guiding principles: ready, relevant and responsive.

“The maritime domain is increasingly complex, and the demand for Coast Guard service is never greater,” Schultz said. “To meet these challenges now and in the future, we’ll need to be a service that is ready, relevant and responsive. These three R’s will frame my guiding principles.”