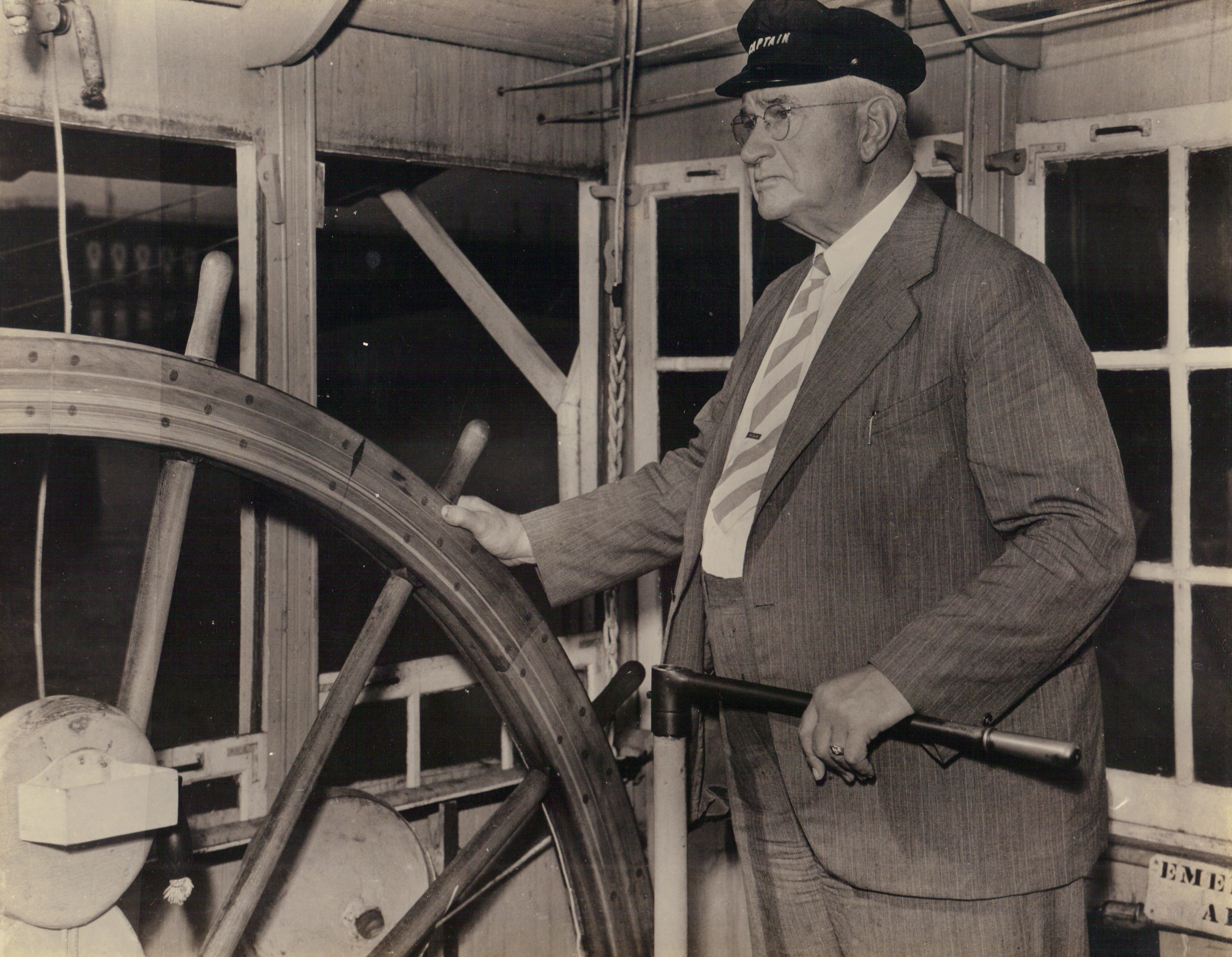 Sixty-two years ago this week (July 4, 1956), the river fraternity mourned the passing of Capt. William H. Leyhe at the age of 83. Affectionately known as “Capt. Buck” to his multitude of friends, it was said that no living master-pilot of the packet boat era on the Mississippi River system was more widely known or more esteemed than Leyhe.

During the 1840s, there was much migration of German citizens to America. One such link was the Leyhe family, founders of the Eagle Packet Company. In 1846, Henry Leyhe, with his wife and four children (two sons and two daughters) departed Darmstadt and came to New Orleans, and then took a steamboat to St. Louis. Fearful of the cholera epidemic that was prevalent in the Missouri city, the family moved successively to the Illinois towns of Belleville and Warsaw.

The two boys, Henry (age 8) and William (age 6) grew up in places where the river dominated economic and social activities in everyday living. It was only natural that when the time came for the young men to consider a

vocation, they chose steamboating, both of them becoming licensed steamboat engineers.

In 1861, the brothers were approached by Ham Brannon, who proposed they build their first boat, utilizing machinery, boiler and other materials salvaged from the wreckage of Brannon’s small riverboat, which had sunk at the mouth of the Des Moines River. The vessel, named Young Eagle, was constructed on the Upper Mississippi River near Alexandria, Mo. The sternwheeler was 84 feet in length by 14 feet in width, operating between Warsaw, Ill., and Keokuk, Iowa, a distance of 5 miles.

The business prospered and the headquarters of the Eagle Packet Company were moved to St. Louis in 1870 as more steamboats were built for the firm. The two sons of the Leyhe brothers (also named Henry and William), were also in the business.

When the steel-hulled towboat James Y. Lockwood was completed at Pittsburgh in 1895, Capt. Buck (then 22 years old) was chosen to be master and pilot for the vessel’s maiden trip to St. Louis; he remained in command for several years thereafter. Other charges included the City of Memphis (owned by the St. Louis & Tennessee River Packet Company) two Cape Girardeaus (sidewheel and sternwheel) and numerous others. By 1920, Henry Leyhe became manager of the Eagle Packet Company, with his brother continuing on the river. Capt. Buck held the unique distinction of holding licenses as master, pilot and engineer; his days as a riverman ended on May 18, 1947, when the Golden Eagle sank in the Mississippi at Grand Tower Island, 78 miles above Cairo. He then assisted his son, Fred Leyhe, with the management of the Eagle Boat Store, a chandlery which the family owned and operated on the St. Louis waterfront near the Eads Bridge since 1895.

Revered by many, it is noted that Leyhe was so popular that scores of passengers returned to his boats year after year as much to enjoy the captain’s company as the actual journey on the river. Capt. Buck was known for being tall in stature and extremely kind and generous. The beloved boatman was buried on July 7 in the Leyhe family plot at Alton, Ill.