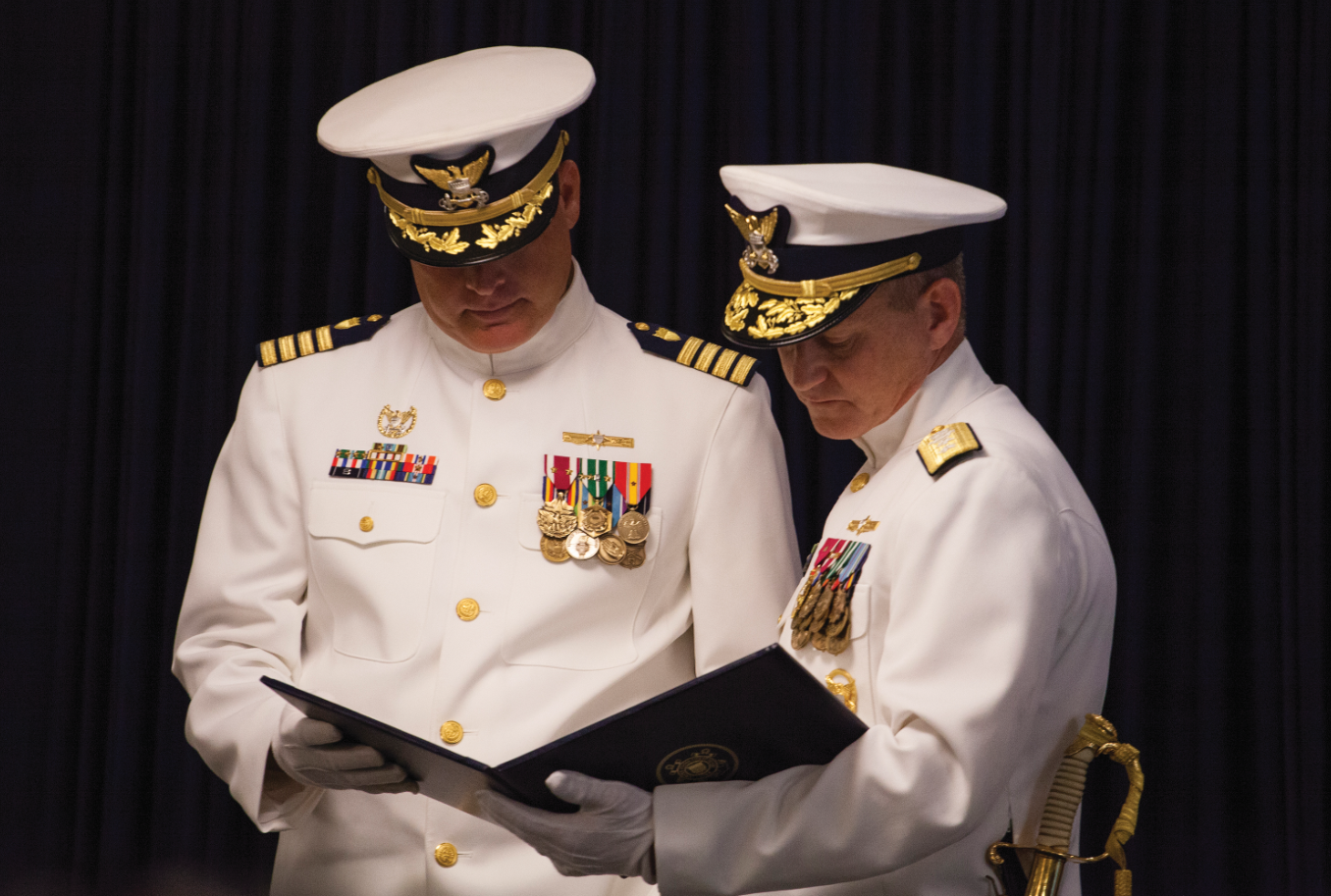 New Captain Of The Port Named In New Orleans

Coast Guard Commander James Bigbie served as master of ceremonies for the event, while Cmdr. Lynn Christensen, chaplain for the Eighth Coast Guard District, offered the opening and closing prayers. Members of the United States Marine Corps Band supplied the music for the ceremony.

Following the playing of the national anthem and the invocation, Arguin and Luttrell performed an personnel inspection of an honor company of Coast Guardsmen assembled for the affair, a traditional part of a change of command ceremony. Arguin led the inspection, offering grins and handshakes to several members of the honor company.

After the personnel inspection, Rear Adm. Paul Thomas, commander of the Eighth Coast Guard District, addressed Arguin, Luttrell and the crowd gathered for the ceremony. He quickly sought to set both Arguin and Luttrell at ease.

“The good news today for Capt. Arguin and Capt. Luttrell is that today’s ceremony is not about them, so the pressure’s off,” Thomas said. “This ceremony is never about the outgoing commander, and it’s not about the incoming commander. It’s about our service, our Coast Guard, our values, our history and our traditions. It’s about how those things ensure that we provide outstanding public service, year after year, sector commander after sector commander.”

A change of command, Thomas said, gives the team a chance to reflect on its accomplishments and its identity.

“Sector New Orleans, as you all know, is one of the largest, busiest, and most effective sectors in the Coast Guard, with one of the most diverse and challenging mission profiles,” Thomas said, later adding, “I’m truly impressed every day as I get briefed about what this crew is doing.”

That diverse mission and challenging task demands an effective leader, Thomas said.
“There is no doubt it takes a strong and capable leader like Capt. Arguin to accomplish what this crew has accomplished over the past three years, and it will require equally strong leadership on the part of Capt. Luttrell to continue this success,” Thomas said.

But the sector’s success hinges on the quality of the crew, Thomas said, who added the Sector New Orleans crew is top notch. With that in mind, Thomas said he believed that any outgoing commander would distill his or her experience in command with one word: privilege.

“Capt. Arguin has experienced that privilege, and Capt. Luttrell can look forward to it,” Thomas said.

Thomas reflected on Arguin’s time as commander, which included assistance during the Hurricane Harvey response in 2017 and search-and-rescue efforts during the 2016 flash floods in the Greater Baton Rouge area, along with the sector’s ongoing work with New Orleans area students and the Louisiana SPCA.

“Wayne, I wish you the very, very best on your next assignment at Coast Guard Headquarters,” Thomas said. “As you take leave of this command, I would like to once again thank you for a job extremely well done.”

Thomas then presented Arguin with the Coast Guard meritorious service medal in recognition for his time as deputy commander and commander, which dates back to June 2014. Then turning to Luttrell, Thomas expressed his confidence in her leadership and ability to command Sector New Orleans.

“With the words, ‘Sir, I relieve you,’ you will assume the highest responsibility and privilege the Coast Guard can bestow on any of our members,” Thomas said. “This is an enormous responsibility and a daunting challenge, but we chose our sector commanders carefully.

Your previous assignments and training, including your time here as deputy, have prepared you well. You are ready.”

Addressing the crowd, Arguin exuded the humor, humility and candor that have defined his time as sector commander.

“I can say without a bit of hesitation that this has been the best tour I’ve ever had in my 26-year career,” Arguin said.

Arguin also thanked Thomas for the service medal, while also directing the true thanks to the men and women who make up Sector New Orleans.

“I didn’t pull a single person from the water in Baton Rouge, and I didn’t inspect a single ship on the Mighty Mississippi,” Arguin said. “Those were all done by the outstanding men and women that make up Sector New Orleans.”

Arguin also thanked his family and all the families of service men and women.
“Our families are our greatest strength and rarely get the public recognition they deserve,” he said.

He also thanked the federal, state and local officials, along with industry partners, for working with the Coast Guard to maintain the safety and economic success of the waterways throughout Sector New Orleans.

Turning to Luttrell, Arguin thanked her for her time as deputy commander.
“Congratulations, you too have exceeded all expectations as deputy,” Arguin said, later adding, “Don’t blink, because before you know it, you’ll be up here.”

Arguin then closed his remarks by reading his new orders, which are to serve at Coast Guard Headquarters as deputy commandant for operations, chief of emerging policies staff.

Luttrell thanked first her parents and sister, who were in the audience from her home state of Tennessee. She also acknowledged people in the audience who had served with her on previous tours.

“It’s an incredible honor and privilege to be taking over one of the busiest sectors in the Coast Guard,” Luttrell said. “Adm. Thomas, I can’t thank you enough for having the faith and confidence in me to lead Sector New Orleans. I won’t let you down, sir.”

“History has certainly dictated that we’ll face periods of high water and low water on the Mississippi River, along with those dreaded hurricanes,” Luttrell said, “but we’ll tackle them together.”

Luttrell closed by thanking Arguin for helping prepare her for this command.

“It certainly has been an awesome ride as a deputy, and I sure couldn’t have broken in under a better person than Wayne Arguin,” Luttrell said. “You truly got me ready to do this, and I learned so much in a short time.”