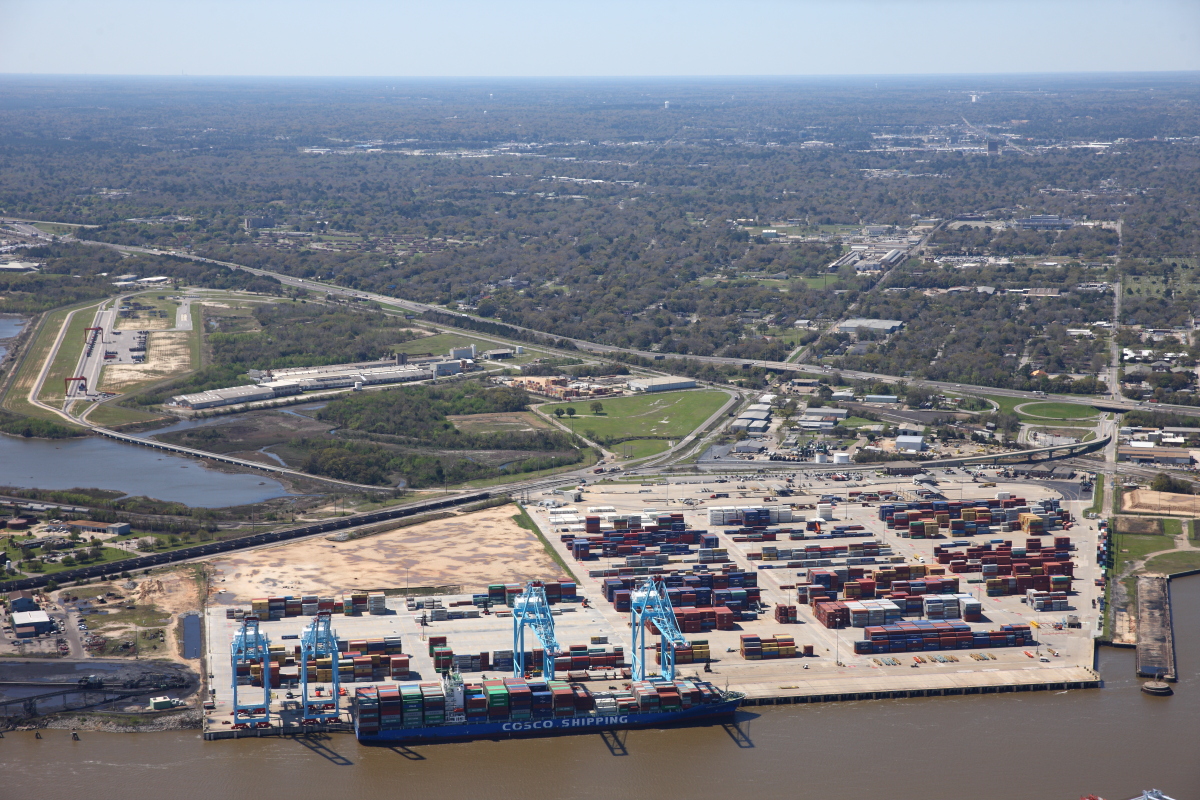 The Port of Mobile, located on Mobile Bay with the Gulf of Mexico to the south and the confluence of the Alabama and Tombigbee rivers to the north, has for more than 300 years been an integral part of the culture and economy of the eastern Gulf Coast and Alabama.

Pierre Le Moyne d’Iberville and Jean-Baptiste Le Moyne de Bienville, the brothers Le Moyne, founded the city of Mobile in 1702, recognizing the strategic connectivity of the Gulf of Mexico and the Mobile, Alabama and Tombigbee rivers.

That connectivity through the Port of Mobile linked Alabama’s agriculture industry to the rest of the United States and the world beyond through the Civil War years in the 1860s.

After the war, the port and the city struggled to regain their footing. And yet in the final decades of the 1800s, the federal government invested heavily to deepen the Mobile harbor, positioning the port f

or success in the 20th century.

According to the Encyclopedia of Alabama (EOA), an online resource developed by the Alabama Humanities Foundation and Auburn University, the federal government spent in excess of $7 million between 1880 and 1915 to improve Mobile’s harbor, deepening it to 23 feet and opening it to oceangoing vessels by 1890.

World War I brought investments in shipbuilding to the Mobile area, and in 1922 the Alabama State Legislature established the Alabama State Docks (the forerunner of the Alabama State Port Authority) and approved the construction of public docks on 500 acres north of the city. The state hired Gen. William Luther Sibert, an Alabama native known best for his work on the Panama Canal and the Hoover Dam, to build the new state-owned docks. The state-owned docks were dedicated in 1928 and remain a part of the Port of Mobile to this day, comprising piers A, B and C.

Since 1928, the Alabama State Port Authority has continued to develop and expand the Port of Mobile in tandem with private investments within the port and concurrent with the opening of the Tennessee-Tombigbee Waterway in 1984 and the modernization of the Black Warrior-Tombigbee Waterway. Today, more than 300 years after Mobile was founded, the Port of Mobile remains Alabama’s only deepwater seaport and a vital gateway to the world.

Not only that, the port continues to innovate and expand, with new facilities, partnerships and innovations on the horizon even now to carry it into the future.

Container Conscious
One of the biggest drivers for the Port of Mobile over the past decade has been the development and fast-paced growth of its container terminal. Just a year ago, the Port of Mobile completed phase two of its container terminal, which added about 20 acres of yard space and brought the port’s annual throughput capacity up to 500,000 TEUs (twenty-foot equivalent units). Phase two also added a pair of super post-Panamax gantry cranes to the port’s skyline.

And the Alabama State Port Authority has already started with the next phase of its container terminal.

“Phase three will add an additional 20 acres, bringing out annual throughput capacity to 650,000 TEUs,” said Judith Adams, vice president of marketing for the Alabama State Port Authority. “We are also, under phase three, doing a 400-foot dock extension. That will allow us to dock two of these 8,500 TEU ships simultaneously.”

Adams said the third phase is all about enhancing the port’s efficient handling of container ships.

The Port of Mobile’s rapid development of its container terminal has produced incredible results. In 2016, the port handled 272,734 TEUs. That number grew to 328,431 in 2017. That earned the Port of Mobile a significant honor from the Journal of Commerce, Adams said.

Alabama State Port Authority director and CEO Jimmy Lyons said the port is poised for sustained growth in its container business line for the foreseeable future thanks in part to a Walmart import distribution center planned for the area.

“It’s continued to grow pretty much every year,” said Jimmy Lyons, director and CEO of the Alabama State Port Authority. “The last two years, we’ve grown almost 20 percent a year in our volume handled. This year, I’m not sure we’ll quite hit 20, but we’ll be close. And the next year, when Walmart starts its intake of containers, we’ll probably beat 20 percent growth. We’re on a very strong growth trajectory.”

Harbor Project Taking Shape
Another project that will benefit not only the Port of Mobile’s container terminal but all its cargos will be the U.S. Army Corps of Engineers’ plan to deepen and widen the Mobile harbor. The channel currently measures 45 feet deep and 400 feet wide. When complete, the project would deepen the channel to 50 feet and construct a 3-mile, 500-foot-wide vessel passing lane.

“We’re getting more and more wider ships, even some that come to the terminals in the upper harbor,” Lyons said, noting that some tankers that call on the port are 145 or 150 feet wide. “When we get that wide of ship, we can’t even pass a Panamax ship, so we get restricted to one-way traffic.”

Lyons said a passing lane at the lower end of the bay would ease that occasional congestion.
Lyons said he expects a record of decision from the Corps on the Mobile harbor project in late 2019.

“At that juncture, we’ll be seeking funding from federal and state sources, because this is a federal-state cost share,” Lyons said. “We’re probably talking about a three-year construction project, so it’s a little way off.”

Roll-On/Roll-Off
One new facility currently under development at the port is a roll-on/roll-off (RO/RO) terminal aimed at handling vehicles bound for overseas markets. The Alabama State Port Authority has partnered with Terminal Zárate S.A. and SAAM Puertos S.A. to develop the RO/RO terminal, which will convert about 57 acres of a defunct bulk material handling facility into an automotive processing and logistics terminal. The terminal site has 40-foot draft access, is served by five Class I railroads, and when complete will be able to handle 160,000 vehicles per year.

The port plans to pay for the $60 million facility with a $12.7 million Transportation Infrastructure Generating Economic Recovery (TIGER) grant, a $28.8 million grant from the Alabama Gulf Coast Recovery Council, and funds from its private sector partner.

Lyons expects to name a program manager for the project by August, with demolition to begin later this year. Construction, he said, should begin in early 2019 and take about a year.

“We think there’s a real need for an automobile or vehicle handling terminal in the eastern Gulf of Mexico,” Lyons said.

Lyons said he thinks Mobile can capture some of the vehicles coming to the United States from Mexico, while also exporting some U.S.-made vehicles to Mexico and other countries. There are also inbound RO/RO ships from Asia that regularly deliver windmill components to the port, and he sees that as a vehicle export potential as well.

A Driver Of Manufacturing
With the Mobile area and the state of Alabama home to a thriving manufacturing industry, it’s no surprise the Port of Mobile handles a huge amount of raw materials and components bound for steel processing facilities, shipbuilders, automobile plants and even an Airbus assembly facility.

LD Seaplane, a RO/RO carrier, delivers Airbus components to the port every 28 days, with the components transferred by barge to a facility managed by DB Schenker, a logistics provider. DB Schenker then delivers components to the Airbus assemble plant as needed.
The port also sees considerable steel imports, specifically from Korea, Brazil and Europe.

There is automotive steel bound for Alabama’s vehicle assembley plants, which include Honda, Hyundai, Toyota/Mazda and Mercedes-Benz facilities. The port also handles steel slabs, which are converted to steel coil, pipe, beams, rebar and even stainless steel, with much of that then exported. The port handles carbon, alloy and stainless steel products from the region’s nine major steel manufacturers. Steel volumes have gone from around 500,000 tons annually to now more than 5 million tons, making Mobile the second largest steel port in the country.

There is also the Port of Mobile’s McDuffie Island coal terminal, one of the largest coal export facilities in the United States. Alabama is home to three coal mines, which produce mainly metallurgical coal bound for steel facilities overseas.

The International Stage
And it’s that mixture of import and export cargos that gives Alabama and the Port of Mobile an important voice in the debate over tariffs and international trade.

In June, Alabama Gov. Kay Ivey made it clear her administration opposes import tariffs because of the damage they could do to the state’s manufacturing sector.

Ivey noted that 2017 set a record for exports from Alabama, valued at $21.7 billion. About half that came from the automobile industry.

“The largest importers of Alabama made goods and services were Canada, China, Germany, Mexico and Japan—all countries which may be forced to reciprocate in response to any new import tariffs,” Ivey said.

Lyons noted that many of the port’s international trade partners have reached agreements with the Trump administration, but many questions remain.

“It’s kind of the great unknown right now,” Lyons said. “How much of the rhetoric is posturing for negotiations and how much of it will go through?”

Regardless what happens on the world stage, the Port of Mobile remains poised for success, thanks to organic Alabama cargos like coal, poultry and forest products, as well as smart investments to the port’s steel, container and RO/RO business lines.