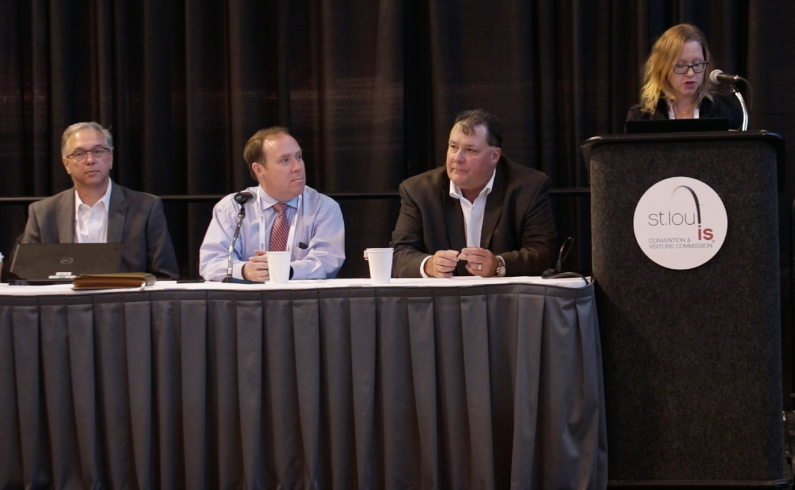 At the Inland Marine Expo (IMX) in St. Louis, International Dredging Review hosted an education session to discuss dredging along the inland waterways. The panel discussion on May 25 welcomed three speakers – one dredge equipment manufacturer and two representatives from the U.S. Army Corps of Engineer St. Louis District. They focused on different equipment used for mechanical dredging on the Mississippi River, the navigation mission of the St. Louis District and how the district uses its dredges and hydrographic surveying equipment.

Larry McAdoo, regional manager for Anvil Attachments, talked about different options and features of buckets and grapples, as well as the design process for buckets. He discussed two types of buckets – hydraulic clamshell and cable buckets – and the pros and cons of both.
The advantages of a hydraulic clamshell include faster cycle times and more accuracy. The disadvantages include limitations in range and capacity. “Your machines can only reach so far, and obviously with your lifting ranges, your capacity is going to be limited,” McAdoo said. “You do have faster cycle time with hydraulics, than you do with cable, and you can get more precise dredging.” He also said hydraulics are often used for maintenance dredging around docks or along the shoreline, or for offloading barges with contaminated sediment.

He outlined a number of options for hydraulic clamshells, including bolt on edges, sealed lips, dust covers, teeth, liners, radius corners and more.
Level-cut buckets make a straight dredge cut, as opposed to standard buckets, which make a more rounded cut. Level-cut buckets are typically used for environmental clean up. They can have up to a one-inch variance throughout the sweep, so it can accurately target contaminated sediment. The buckets capture material once they are closed, and low turbidity designs can limit sediment disruption.

“The sealed lip is more utilized in environmental dredging,” McAdoo said. “The main goal of the seal lip is to keep down the turbidity and keep the contaminated soil from being stirred up into the water system.”

Other options for hydraulic buckets include serrated edges on a bucket that are used for removing sediment around a dock. Dewatering baffles are used often with the sealed lips to keep the turbidity down, by allowing the water to flow out portals on top but keep the material in the bucket. If a dredge plant is limited in its range of where the hydraulic machine can reach, extension tubes can extend the bucket deeper. Radius corners, instead of square flat corners, can enhance the digging performance of buckets. Buckets can also be made with a stainless steel liner for sticky material.
Cable buckets, McAdoo said, have a larger bucket capacity than hydraulic clamshells. They typically have greater working ranges, but carrier availability and operators may be more difficult to find. The carrier size may also be a limiting factor, especially in confined areas.

He also discussed round nose (RN) versus general purpose (GP) digging buckets. “These are the two buckets that are used most in cable digging,” McAdoo said.

RN buckets are more aggressive and higher in cost. The buckets have come into play with the expansion of ports to meet the post-Panamax vessel requirements. The port deepening projects often use these buckets for digging virgin soil. “The aggressiveness of the round-nose bucket will get you a much better dig,” McAdoo said.

GP buckets are generally used for maintenance dredging. This bucket is preferred by the U.S. Army Corps of Engineers, McAdoo said.
Next, he discussed the design process for new buckets. Based on the customer’s desired capacity and cable size, and the line pull, this information helps determine the bucket and sheave diameter. Other calculations include the bucket to weight ratio and digging forces. A 3D modeling program helps tweak the design by eliminating unnecessary weight and identifying potential weak areas.

Finally, McAdoo addressed hydraulic grapples, used mainly for moving large rock and boulders. The tines of a grapple may be configured in different ways – narrow, semi-enclosed, half-enclosed or fully enclosed. A fully enclosed tine configuration is made for digging smaller rock or gravel. When the tines close, it forms a bowl shape, much like a bucket, which could not dig in gravel as efficiently. The fully enclosed tines hold in the small rock.
Anvil also manufactures equipment that is essentially a combination grapple and bucket. “It has larger tines to penetrate, but also has the bowl to capture smaller pieces,” McAdoo said.

A 2-tine stone grapple works well for irregular shaped rocks, and a toggle-style grapple is used for moving armor stone, up to 25 tons. With that size rock, the tines can toggle individually to obtain the best grip on the stone.

“St. Louis is unique. We’ve got a pooled system from St. Louis north and then our open river from St. Louis down to the Gulf of Mexico,” Engle said.
River forecasting is an important mission at the St. Louis District. Engle repeated a common adage from the district, regarding river water levels. “Floods are easy; you only have to worry about how high the river is going. Droughts and dredging are a little bit more difficult, you have to worry about how low the river is going and where the bottom is at. So forecasting is critical,” Engle said.

For the dredging mission, the river channel is maintained at 9 feet deep and 300 feet wide with additional width in bends as required during low water. In 2017, the St. Louis District used three dredges for channel maintenance, removing a total of 4.9 million cubic yards. Most of that was done by the Corps dredge Potter, which removed 4.5 million cubic yards. The Corps dredge Goetz removed 342,000 cubic yards, and the Luhr Bros. dredge Bill Holman on contract removed 64,000 cubic yards from one project for the Southeast Missouri Regional Port Authority.

Paul Clouse, chief of the engineering data management section with the Corps St. Louis District, expanded on the hydrographic surveying work at the district. “The electronic charts that are onboard all the systems up and down the river, the data for the St. Louis area comes directly from my office, so if you have any issues, please let us know. We’re always trying to make safety of navigation at our forefront,” Clouse said.

The district has multibeam and single beam capabilities. The multibeam can shoot hundreds or thousands of soundings per second, whereas a single beam just does one point at 60 hertz, getting 60 points per second. “[The multibeam] is very high resolution. But it has its limitations. It takes a lot to process that, so that’s why we typically use the single beam for getting channel conditions,” Clouse said.

The St. Louis District also does channel closure search surveys. If there is a sinking in the channel, the Coast Guard will close the channel until that vessel is found. “We’ll go out and locate it. Get the position and orientation, and the Coast Guard will send it out as a broadcast notice, as well as a local notice and an NTNI (notices to navigation interests). We try to get that information out as quickly as possible,” Clouse said.