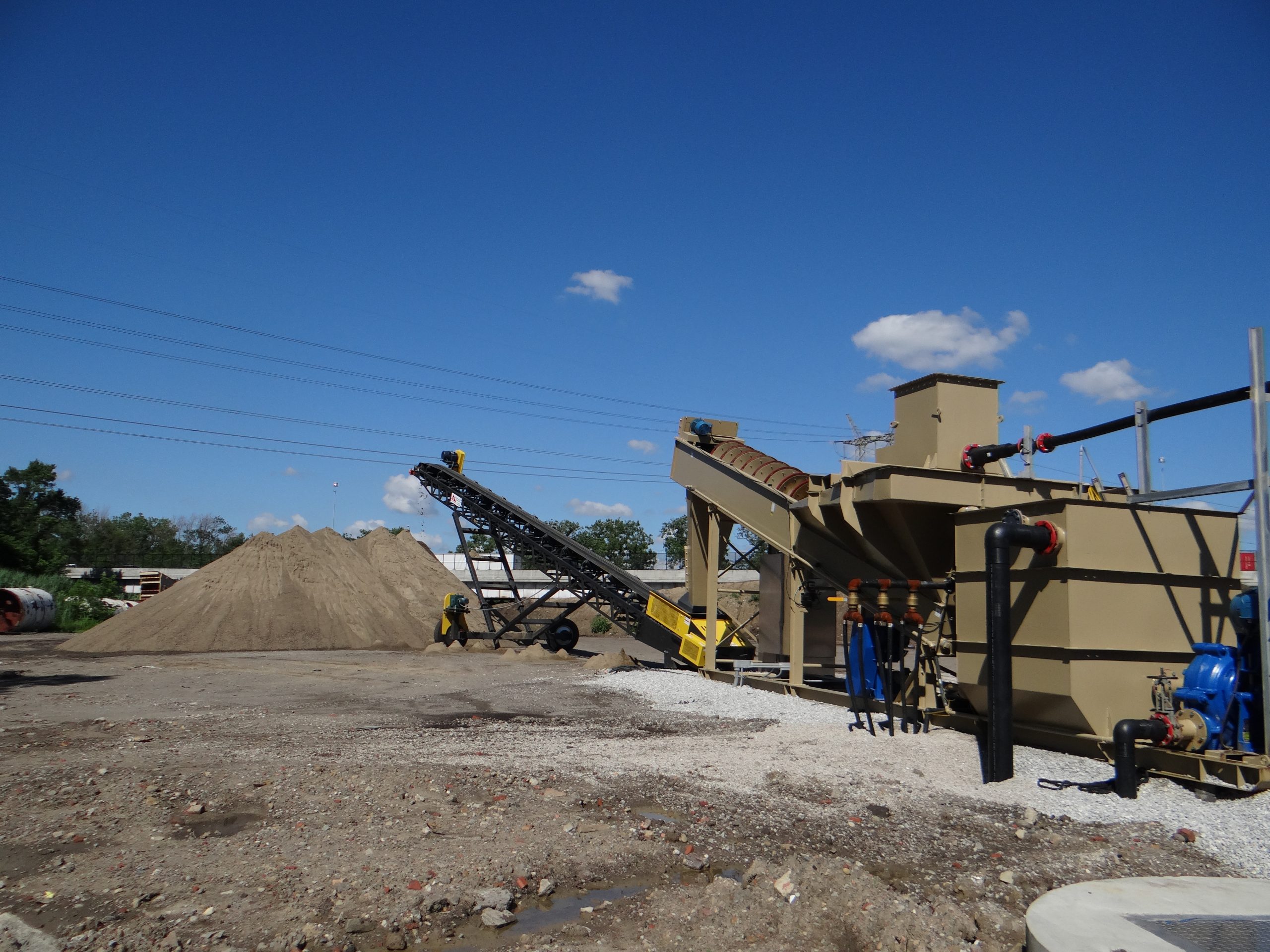 The State of Ohio has many reasons to be thinking about dredged material – its confined disposal facilities (CDFs) are reaching their capacity, and as of July 2020, open-lake placement of dredged material will be banned in all Ohio harbors. With shrinking budgets removing less material and fewer places to put it, beneficial use alternatives have taken center stage in Ohio. Many federal and state agencies – the U.S. Army Corps of Engineers Buffalo District, Ohio EPA and the Ohio Department of Natural Resources (DNR), along with state partners – the Port of Cleveland, the Port of Toledo and many others – have teamed to address a maintenance dredging backlog at its ports and harbors, dwindling space in local CDFs, and what to do with its sediment as the ban approaches.

This group of federal, state and local agencies believe beneficial use of dredged material is the answer. In 2015, Ohio state legislature passed Senate Bill 1, which banned open-lake placement in Ohio harbors. Many in the state had already been studying how to better manage its dredged material, not just find better places to put it, but find better ways to use it as a resource. The studying and innovation ramped up as the ban become imminent.
A group of stakeholders, including Ohio EPA, Ohio DNR, the Corps and local partners, began looking at alternatives for its dredged sediment, outlining three viable options: dredged material to farmland; to commercial soil; and to habitat restoration. So far the group has identified nearly 40 potential projects for beneficial use of dredged material from Ohio harbors and rivers.
Great Lakes and CDFs

The Corps Buffalo District manages sediment on Lake Ontario and Lake Erie. Annually, the Corps dredges about 3.4 million cubic yards from the Great Lakes. About 1.5 million of that comes from Lake Erie, which is very shallow.

The district also manages four CDFs in Ohio at Toledo Harbor, Huron Harbor, Lorain Harbor and Cleveland Harbor. The CDFs have some capacity still but dwindling fast. Ron Kozlowski, chief of programs for Corps Buffalo District, said Toledo Harbor has about 2 million cubic yards left, but the harbor dredges about 800,000 cubic yards per year. The Cleveland Harbor CDF is also running out of capacity quickly, and Buffalo Harbor has a few years left. Lorain and Huron Harbor CDFs are used infrequently and still have some capacity left, but many other harbors, like Ashtabula, do not have CDFs at all.

Beneficial Use Innovation and Technology
The Buffalo District and its Ohio partners have been studying beneficial use alternatives and what to do with its sediment for some time. “There’s a backlog of maintenance throughout the Great Lakes commercial harbors,” Koslowski said. “We haven’t been maintaining the harbors because of limitations of funding. There’s only so many dollars to go through the system. And we treat the Great Lakes like a system. With limited dollars, we budget and fund across the system.” Koslowski said that recent budgets have been getting better, with more funds coming from the Harbor Maintenance Trust Fund.

In July, Ohio Senate Bill 299 allocated an additional $10 million, designated for beneficial use. Mackey said the state is also going after Great Lakes Restoration Initiative funds for wetland restoration projects. Ohio has projects across the state lined up and ready for that money.
“We came up with a large portfolio. Some projects are coming up shovel ready, and some we’re looking at down the line. The idea is to have a pipeline of projects,” said David Emerman, dredge program administrator for Ohio EPA.

Regulatory Changes
An integral part of making these projects feasible for the state and private contractors is a regulatory rule change in how dredged sediment is classified and permitted. Dredged material by statute was classified in Ohio as a waste material and therefore, needed to obtain an Ohio EPA permit for beneficial use.

In October 2017, Senate Bill 2 authorized Ohio EPA to draft new rules for beneficial use permits. To change the statute, Emerman said, the agency developed criteria for dredged material and removed the waste material classification. “Our beneficial use program will be a tiered approach,” Emerman said. The cleanest sediment will get a harbor sediment authorization, which no longer requires a lengthy permit for beneficial use. More contaminated material can still be used beneficially, but not without a permit and more testing and record keeping. Ohio EPA did substantial work, Emerman said, in evaluating dredged sediment, what is in it, grain-size distribution, nutrient amounts, which will dictate how the dredged material will qualify for the authorizations. “Early indications are a large portion (of Ohio dredged sediment) would be clean enough,” Emerman said. He said most of the internal work has been done already, and the proposed rules should be released by the end of July or early August.

Beneficial Use Projects
The State of Ohio has many beneficial use projects and research studies already in the works. In support of farm field applications, the Great Lakes Dredged Material Center for Innovation, a 16-acre research farm facility at the Port of Toledo built from 75,000 cubic yards of dredged sediment from the Maumee River, is evaluating dredged material for agricultural and blended soil purposes. The Dredge Research and Innovation in Farming Team, a public advisory committee made up of many of the federal and state agency leaders and local farmers, are helping to drive the research done there. The group is also helping with another project to develop more infrastructure for dredged material management and operation and maintenance activities needed for dewatering, soil and other testing methods, and blending soil for agricultural use. The partners on this project have applied for the Section 1122, Water Resources Development Act of 2016, Beneficial Use of Dredged Material pilot program.

Dredged sediment to marketable soil has been studied and applied at the Port of Cleveland, CDF 12, where a sediment processing facility is taking dredged material from the Cuyahoga navigation channel and producing clean sand for sale. Through a series of sluiceways, as the dredged sediment is hydraulically pumped, the system separates the coarse sediment from the fines. The sluiceway is a natural canal, where the specific gravity of each sediment causes it to settle. The coarser, larger sediment settles out closer to where it is received. The finer materials travel through the sluiceways. The clean sand is dewatered and used for commercial purposes, such as capping gas pipelines. The Port of Cleveland is working with a private partner, Kurtz Bros., on the project.

The urbanization of the watershed along the Cuyahoga River created hardened surfaces and miles of concrete that flood the river when it rains. This fast moving water erodes the river bank, moving unnatural amounts of sediment downstream, which settles in the shipping channel. To maintain depth, approximately 225,000 cubic yards of sediment is dredged from the shipping channel each year.

The project also has an upstream element, using a bedload interceptor from Streamside Systems, which collects coarse grain material, which can be used for supplementing concrete, for applications such as in pipe bedding, in soil blends, and for backfill and embankments.
Emerman said the four-step process (accepting the dredged material; drying out the material; blending the material; and delivery to the marketplace) would not have been possible without the Ohio EPA rule changes. The new rules give private entities and ports the means to collect, process and market dredged material without extensive permits.

The state has many more projects in the works, including many wetland restoration projects, which also would not have been possible without the rules changes. Mackey at Ohio DNR believes the work in Ohio could easily be translated to other states, particularly along the Great Lakes, which all have issues with dwindling CDFs and a backlog of maintenance dredging.

“In Ohio, we have a deadline: July 1, 2020. We have a hard deadline and working hard to meet that deadline,” Mackey said.
It has taken regulatory changes, great partnerships and millions in funding, but Ohio is well on its way to managing its dredged sediment for the future.