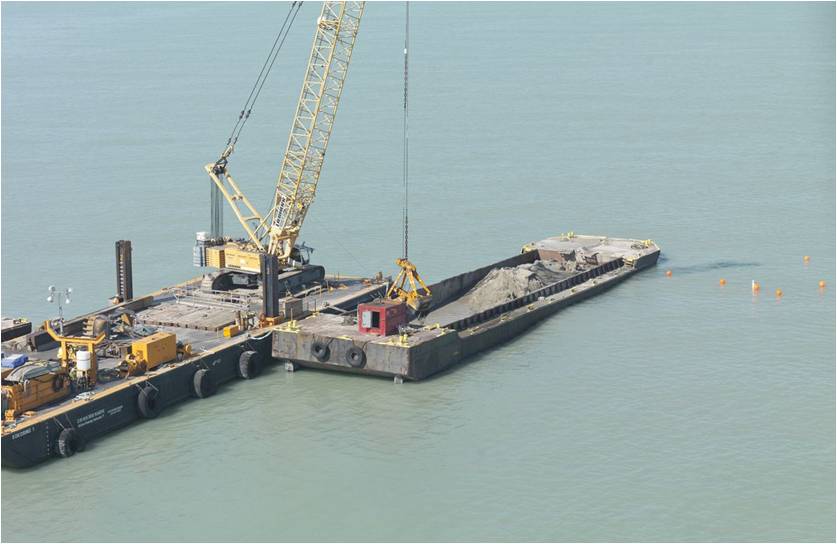 Dredging resumed at Indiana Harbor on June 11 and will continue through the fall. The work is a continuation of the dredging that began in September 2017 and stopped November 2017 for the winter season.

The East Chicago Waterway Management District (ECWMD) is the local cost-share sponsor with U.S. Army Corps of Engineers Chicago District. The work is being done through a joint venture between Durocher Marine (a division of Kokosing Construction Company, Inc) of Ohio and O’Brien & Gere of Illinois. Their original contract started in 2011 and ended in 2016. A new contract was awarded to Kokosing Construction Company Inc. in September 2016 and will run through September 2021.

The contractors will remove approximately 120,000 cubic yards of material during this phase of the dredging. The overall project involves dredging the harbor channel and two canals, and the operation and maintenance of the East Chicago, Indiana, CDF, a former site of a petroleum refinery, which is a U. S. Environmental Protection Agency Resource Conservation and Recovery Act (RCRA) site that provides storage for the dredged sediment and isolates and contains the existing on-site soil and groundwater contamination in compliance with RCRA requirements. The site includes 34,000 square feet of vertical barrier/soil bentonite slurry trench cutoff wall to create an impermeable perimeter that hydraulically disconnects the groundwater at the CDF site from the Calumet aquifer. Dikes of impervious clay material contain the dredged sediment. Eight 6-inch diameter vertical extraction wells with submersible pumps prevent impacts to offsite groundwater by producing and maintaining an inward hydraulic gradient around the CDF perimeter.

Also, installed at the site are 40 monitoring wells, two ultrasonic water level indicators, a control building, instrumentation and a control system along with 10,500 linear feet of header pipe. As part of this project the contractor constructed the infrastructure for a package wastewater treatment plan to treat groundwater, CDF interior precipitation runoff and sediment dredge water generated at the CDF.

Dredging is being performed using a 15-cubic-yard Cable Arm bucket. The dredged material is loaded onto sealed hopper barges and moved to the disposal area. Once on-site, the dredged material is mixed with water, screened through a debris separation barge and off-loaded hydraulically into the CDF to settle. All debris larger than two inches is separated and accumulated inside the debris separation barge. The channel will be dredged to congressionally authorized navigation depths.

Contaminated sediment and a lack of a suitable storage place for the sediment led to the harbor not being dredged from 1972 to 2012. Since 2012, more than 1 million cubic yards of sediment has been removed from the waterway and sent to the CDF; however, the most highly contaminated sediment, which contains polychlorinated biphenyls in concentrations exceeding 50 parts per million, will not be dredged until the Corps receives a Toxic Substances Control Act permit from the Environmental Protection Agency to allow for placement at the CDF. The Corps applied for the permit last year, but is conducting more research into any potential impacts and other potential off-site disposal locations for the contaminated material.