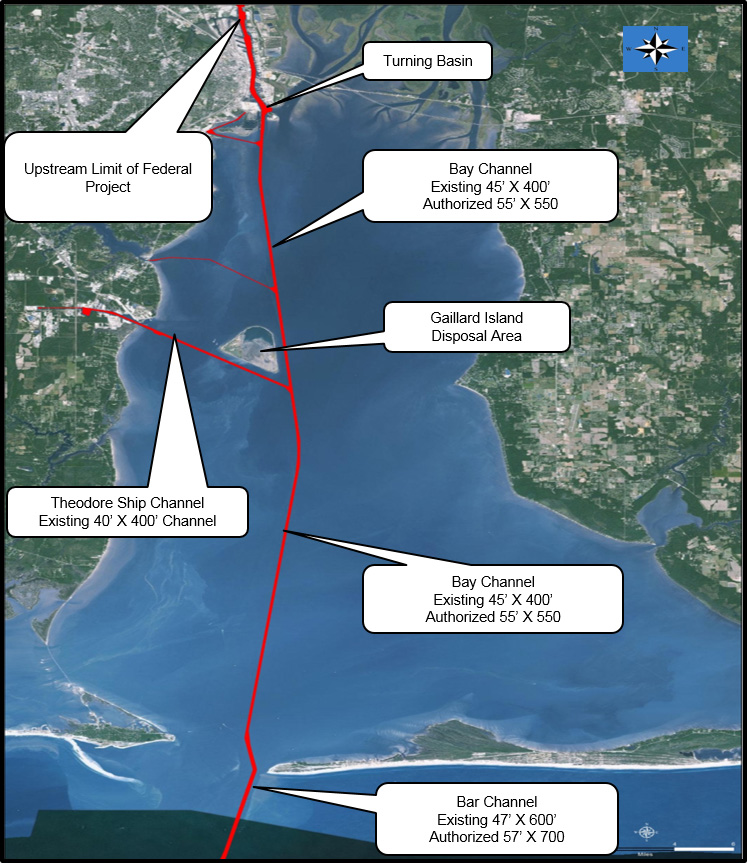 The Corps of Engineers has opened a comment period on a proposal to deepen and widen the Mobile, Ala., shipping channel.

In 2014, the Alabama State Port Authority requested that the Mobile Engineer District consider increasing the depth and width of the channel. Specifically, the authority asked the Corps to investigate the feasibility of constructing the channel to dimensions authorized in the Water Resources Development Act (WRDA) of 1986.

Following several years of study, the Corps’ Tentatively Selected Plan (TSP) recommends improvements that are less than the dimensions authorized in the 1986 WRDA. The TSP is contained in the Corps’ Draft Mobile Harbor Integrated General Reevaluation Report with Supplemental Environmental Impact Statement (Draft GRR/SEIS), issued July 27. That document is the subject of the comment period, which extends to September 10.

Highlights of the TSP include:

• deepening the existing bar and bay channels, including the Choctaw Pass Turning Basin and a portion of the river channel, by 5 feet to project depths of 52, 50 and 50 feet, respectively; with an additional 2 feet for advanced maintenance plus 2 feet of allowable overdepth for dredging;

• incorporating minor bend easings at the double bends in the bar channel approach to the bay channel;

• widening the bay channel from 400 feet to 500 feet from the mouth of Mobile Bay northward for 3 nautical miles to provide a two-way traffic area for passing; and

• expanding the Choctaw Pass Turning Basin 250 feet to the south at a depth of 50 feet to better accommodate safe turning of large vessels.

Material dredged during improvements will be placed at a relic shell-mined area and the Mobile Ocean Dredged Material Disposal Site. Any suitable bar channel new-work material dredged in sufficient quantity to warrant placement at the Sand Island Beneficial Use Area will be accomplished accordingly, the Corps said. Future material from channel maintenance will be placed at those disposal sites in addition to open-water sites adjacent to the channel, the northwestern Sand Island expansion, and/or upland disposal sites.

A copy of the Draft GRR/SEIS can be found on the Mobile District’s website, www.sam.usace.army.mil.