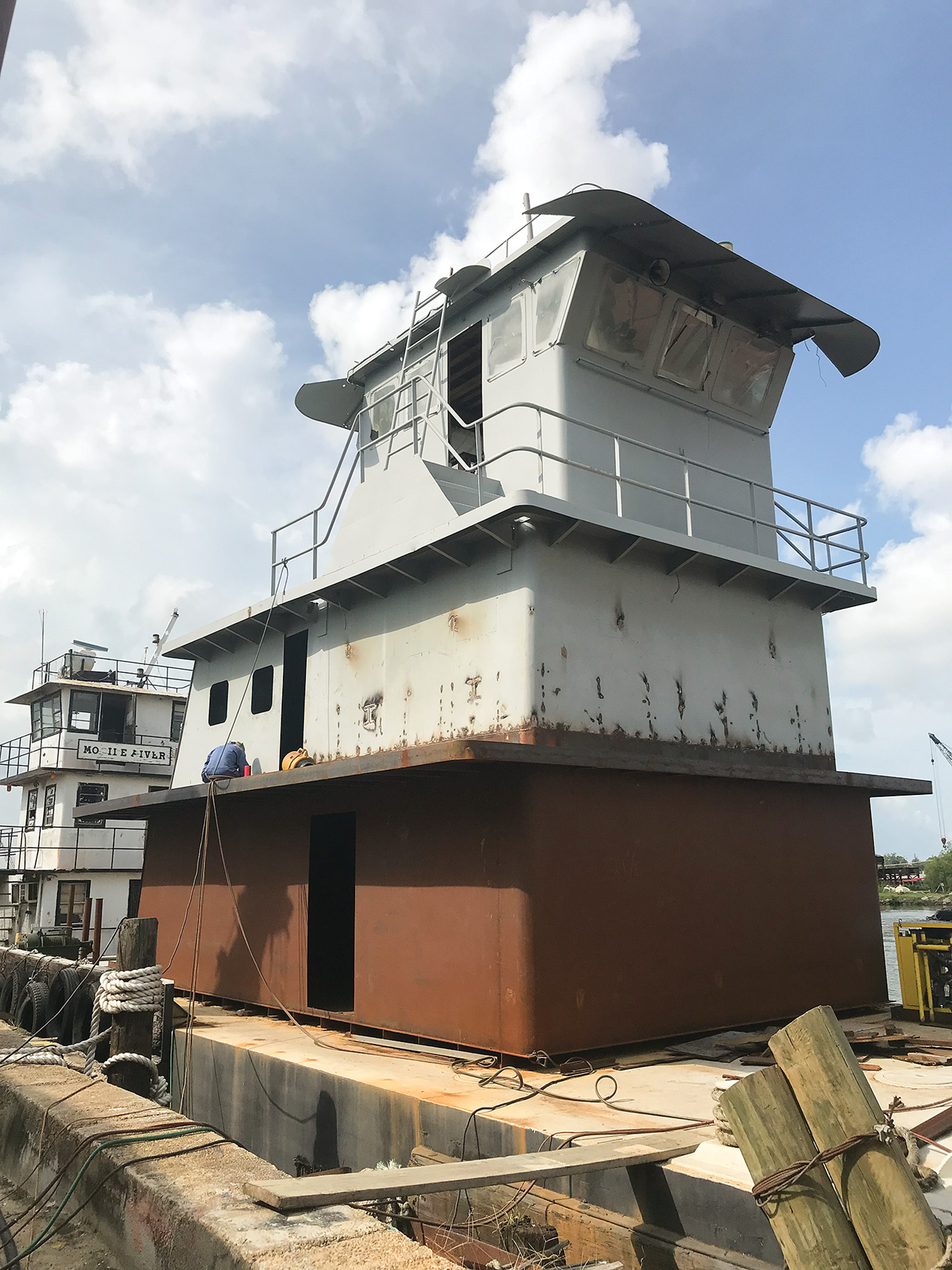 Shamrock Marine LLC, a provider of warehousing and vessel transport of groceries, supplies, filters, palletized cargoes and personnel to towboats and oceangoing ships midstream, has built a reputation for speed and safety as it serves vessels on the Mississippi River in Southeast Louisiana and in Channelview, Texas.

Now, the company, co-owned by founder Duncan Armentor and Vic Calvaruso, is one step closer to building and installing a new landmark structure on the river batture in Baton Rouge, La., with the construction of its towboat-inspired headquarters. On June 15, on the Harvey Canal in Harvey, La., workers at Bayou Machine & Fabrication along with Stewart Construction placed a salvaged towboat wheelhouse atop a newly fabricated main deck and began welding the structure together. By late July, a new portion of the middle deck had been added to the structure, with a new stairway leading to the upper deck of the wheelhouse also installed.

Once the repurposed wheelhouse and new main deck are securely welded, they will be moved by barge up to the company’s Baton Rouge base of operations, located on the left descending bank just upriver of the I-10 bridge. Once there, the structure will be moved into place on the river batture, then built out and furnished in situ.

Armentor, who also is a river pilot with the New Orleans-Baton Rouge Steamship Pilots Association, noticed the old wheelhouse in the spring of 2017 in a field adjacent to Bayou Machine & Fabrication while one of Shamrock’s vessels was getting worked on. At the sight of the wheelhouse, Armentor caught a vision for incorporating the structure into Shamrock’s headquarters in Baton Rouge. Within days, Armentor had not only purchased the house but had also tracked down the vessel’s history. The wheelhouse originally belonged to the mv. Ronda, built in 1966 at Main Iron Works in Houma, La.

Now, just over a year later, Armentor said the plan is coming together, with all the permitting in place and the structure taking shape.

The lower deck will house Shamrock Marine’s main offices and a dispatch center, along with a lounge area for pilots awaiting transport to ships. The middle deck will include additional offices, an executive’s office and restrooms. The upper part of the wheelhouse will be built out to resemble an authentic working wheelhouse, designed to offer visitors a “four-dimensional” river experience.

“We’re going to have three screens that will fold down [in front of the wheelhouse windows], and we’re going to play back an actual job we’re going to do on a towboat,” Armentor said. “It’ll be like lip-syncing to a show.”

Armentor said he plans to record video and audio from a friend’s towboat and play it back to create a virtual towboat experience in his office wheelhouse. People touring the office—particularly children and youth—will be able to hear and react to deckhands communicating via radio, move the sticks and throttle and even sound a working air horn. He said the goal is to introduce as many people as possible to what happens on the river day in and day out.

“I want the kids to see what it’s really like to work on a boat,” Armentor said. “There’s nothing like it where kids can come on a real towboat and experience the profession of working on the river and moving barges. This is going to be really neat.”

Armentor said he will place a plaque on the walking path atop the levee that will not only recount the history of the donor towboat but will also invite people to tour the office for free. He also said the new office will be named in honor of Laupepa Maiava, Shamrock’s longtime director of operations.