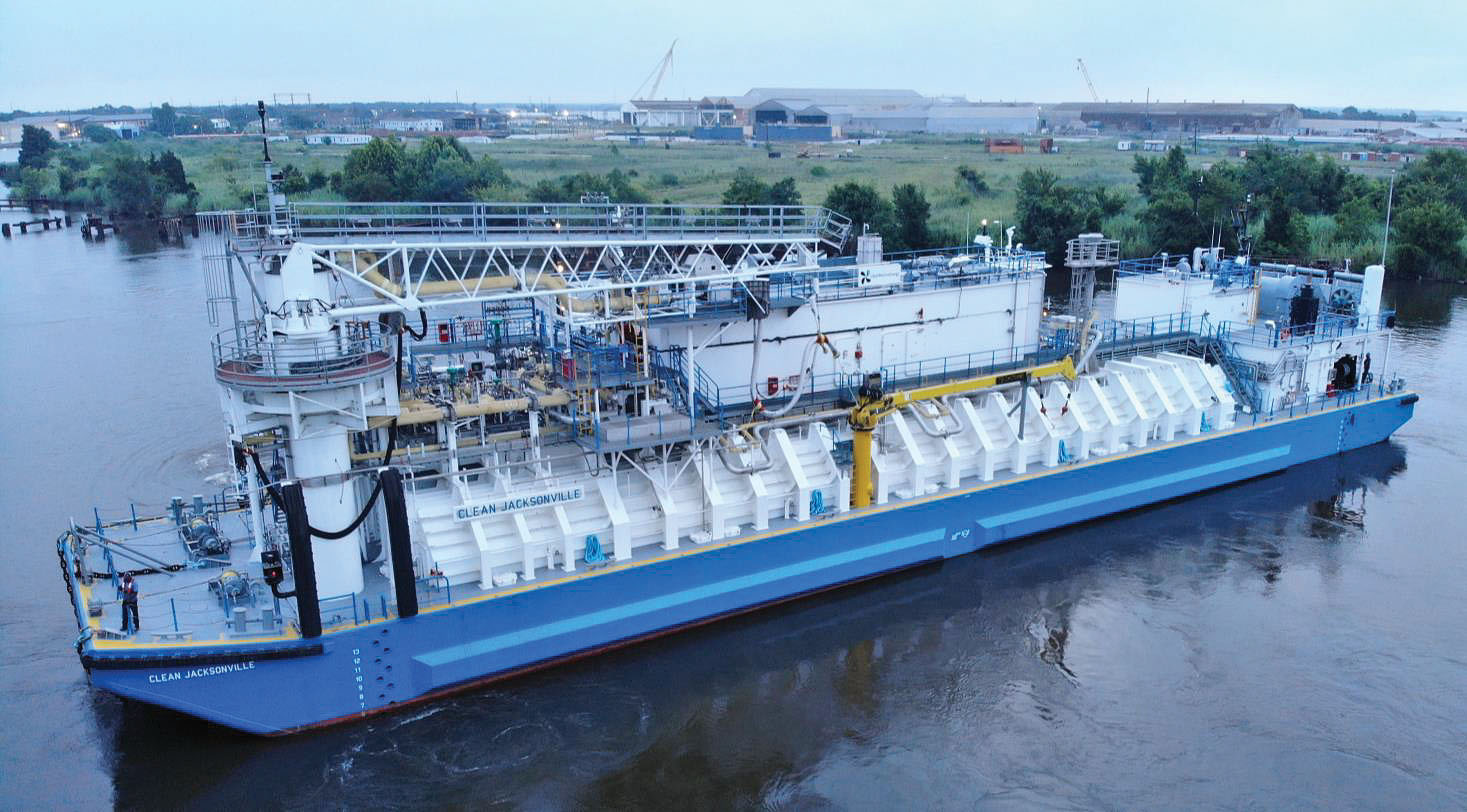 The Clean Jacksonville was constructed in Orange, Texas, at Conrad Orange Shipyard, and the successful gas trial took place in Port Fourchon, La. The vessel will enter service for TOTE Maritime Puerto Rico in the Port of Jacksonville, Fla., where it will bunker two Marlin Class containerships operating on LNG fuel between Jacksonville and San Juan, Puerto Rico.

“The successful completion and delivery of the Clean Jacksonville is both a proud and humbling moment for Conrad,” said Brett Wolbrink, vice president of Conrad LNG LLC. “I am proud of our team’s tenacious dedication to the completion of this project and unwavering adherence to our commitments. At the same time, we are humbled and grateful to be a part of an unparalleled international partnership comprised of the owner, our engineering groups, vendors and manufacturers who made this vessel a reality.”

Bristol Harbor Group Inc. (BHGI) was responsible for the design and engineering of the barge. BHGI’s sister company, The Shearer Group Inc., provided technical/shipyard support during the construction. BHGI served as the regulatory lead and liaison between the regulatory bodies. During the early stages of the design, BHGI participated in a HAZID/HAZOP workshop as well as a Waterway Suitability Study and a Waterway Suitability Risk Assessment, which were the first steps toward obtaining Coast Guard approval. Since it was a first-of-its-kind vessel, BHGI worked with all parties involved throughout the entire process to obtain ABS and Coast Guard approvals.

“Bristol Harbor Group, Inc. was an invaluable partner with Conrad to bring this project from inception to reality,” Wolbrink said. “Not only did they perform the vessel design development and naval architectural work, they took on the overall responsibility of managing and spearheading the risk assessments and regulatory review process for our entire engineering efforts comprised of both domestic and international based teams. Their leadership in this area and working relationship with ABS and U.S. Coast Guard was a critical component of successfully completing the project.”

GTT, a French company, is a leading designer of membrane containment systems for the maritime transportation and storage of LNG.

“GTT has been honored to play a key role in the successful delivery of this first U.S. LNG bunker barge by Conrad,” said Philippe Berterottière, chairman and CEO of GTT. “The broad collaboration between TOTE, Conrad, the myriad project stakeholders, and U.S. regulators led to the successful design, construction and commissioning of this unique and ground-breaking project. Beyond our traditional role of designing the cargo containment and other cryogenic elements, such as the innovative REACH4 bunker mast, GTT adapted and expanded its support services to ensure the effective training of the barge crew and the safe and satisfactory execution of the barge commissioning activities and gas trials. Adapting to meet the requirements and fill the gaps within this growing industry is essential to continue to develop LNG as the preferred and cleaner marine fuel of the future. GTT remains committed to that vision.”

“TOTE Maritime Puerto Rico is excited to utilize the Clean Jacksonville for our LNG bunkering,” said Tim Nolan, president and CEO of TOTE. “Our partners, including Conrad Shipyard and GTT, have been critical in our development of North America’s first LNG bunker barge. The use of LNG as a maritime fuel results in tremendous environmental benefits—including air and water quality improvements—and this barge is the final critical component of our LNG program in Jacksonville.”

Conrad concluded, “While it has been a challenge and true learning experience, the Clean Jacksonville is a triumph for the U.S. maritime industry. I am proud of Conrad’s commitment, investment and foresight in shepherding the advancement of LNG as a marine fuel. We welcome the opportunity to work with customers as they explore and pursue the use of LNG in their vessels.”

August 22: This story was edited to add information about Bristol Harbor Group Inc.’s role in the construction.