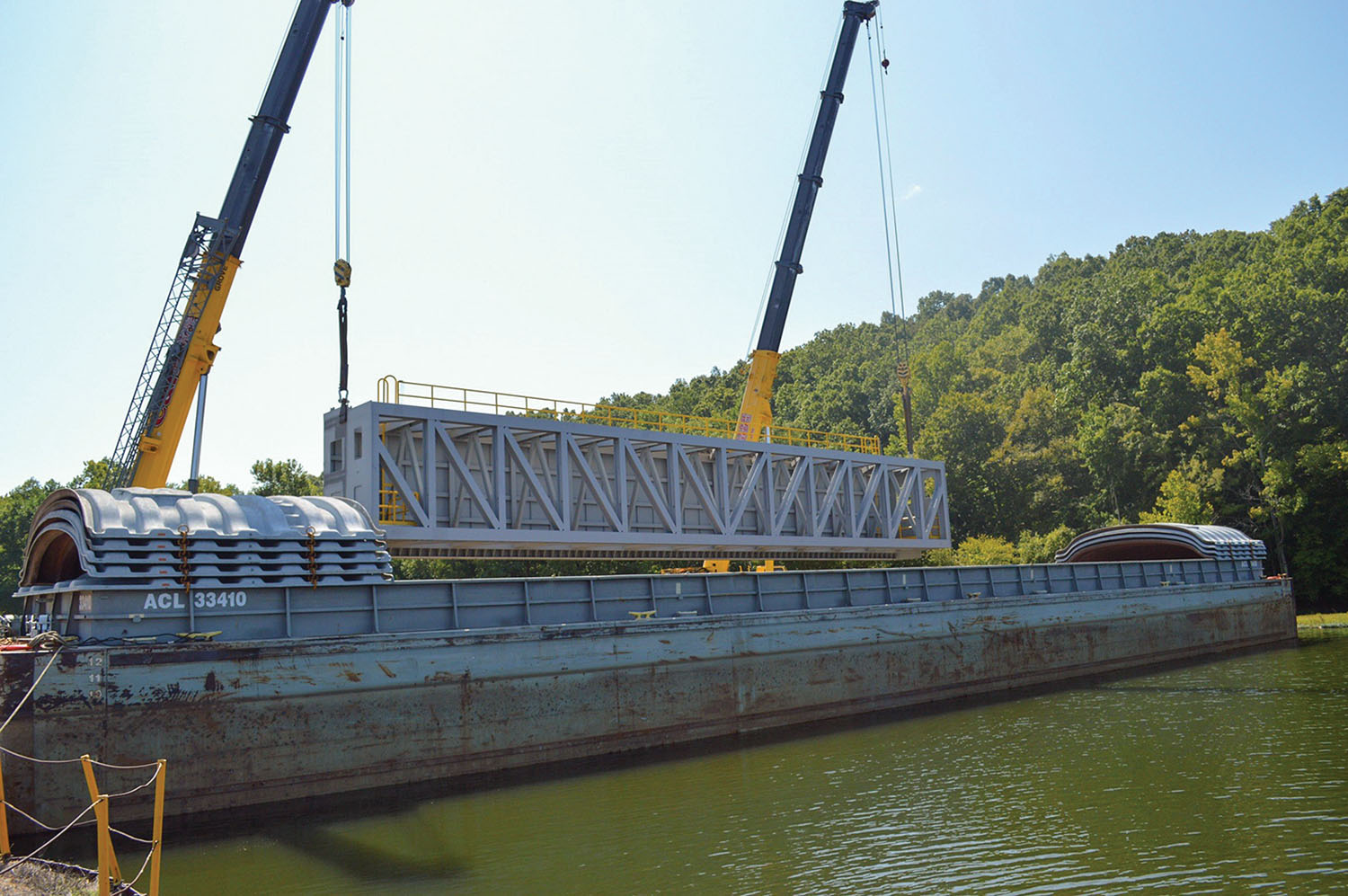 With the ribbon-cutting ceremony for Olmsted Locks and Dam underway the day this story went to press—August 30—G&G Steel made sure to be present for the momentous occasion. The fabrication company has unique ties to Olmsted, a project that has been in the works for more than three decades. It built five of the lock and dam’s tainter gates, the largest gates the company has ever built.

Eric Daniel, plant superintendent for G&G Steel Mississippi Works, a subsidiary of G&G Steel, said the Olmsted tainter gates were a larger-than-usual challenge for the company due to their sheer size. Each tainter gate measures 41 feet high by 110 feet deep and weighs approximately 350 tons.

“With our plant in Russellville (Ala.) not having barge shipping capabilities, we had to fabricate the gates at either our Cordova (Ala.) or Iuka (Miss.) facilities,” said Daniel.

Ultimately, G&G Steel decided to use its Iuka facility at Mile 446 of the Tennessee-Tombigbee Waterway, a stretch of the river that is also known as Yellow Creek. “This facility basically has unlimited barge-shipping access going south on the Tenn-Tom or north on the Tennessee River,” Daniel added. “We started the early phases of subassembly fabrication of the gates at our Russellville location, and completed the fabrications at our main fabrication bay in Iuka to ensure that we exceeded the schedule required. This allowed G&G Steel to make provisions to ship gates 4 and 5 both one year ahead of schedule.”

Daniel said the company was able to overcome the challenge of constructing these large gates ahead of schedule due to the company’s dedicated staff and work ethic. “Loading those massive structures was very challenging,” he said. “G&G Steel modified a barge that doubled as an installation barge to ship the gates one at a time and install them at Olmsted.”

Daniel said that once the barge arrived at Olmsted with one of the tainter gates on board, it would be floated into the gate chambers and lifted with strand jacks for installation into the operating machinery. “G&G Steel looks forward to more challenging projects from the Corps of Engineers, a long-time customer of ours, and we are very proud to have contributed to rebuilding America’s infrastructure,” he said.

New Gate For Montgomery Lock
While the work at Olmsted might be coming to an end for the time being, G&G Steel has remained busy working on other Corps projects, including the fabrication of lift gates for Montgomery Lock and Dam near Pittsburgh, Pa., on the Ohio River.

The company shipped a lift gate via barge for the Pittsburgh Engineer District August 29. It is being towed by the mv. Bill Hill, owned by American Commercial Barge Line.

This is the third lift gate of this design that G&G has built for the Pittsburgh District.  It is the third gate out of four total. The fourth gate has been completed, but is receiving its protective coating application, according to G&G Steel. The company submitted a bid earlier this year to build two more lift gates for the Pittsburgh District, which was accepted August 30.

The gates are about 105 feet, 10 inches long from operating sprocket to operating sprocket, 16 feet high and weigh approximately 260,000 pounds when fully assembled. The body of the gates are protected by a metalized coating of 85 percent zinc and 15 percent aluminum, along with a full paint system on top of the metalizing.

Headquartered in Russellville on 27 acres, its subsidiary firms—Warrior River Steel in Cordova and G&G Steel Mississippi Works in Iuka—each have access for shipping via rail and barge. In Russellville, the company has a fabrication plant, five bays, a machine shop and a large assembly bay for mechanical, electrical and hydraulic components to be tested in a cleaner environment.