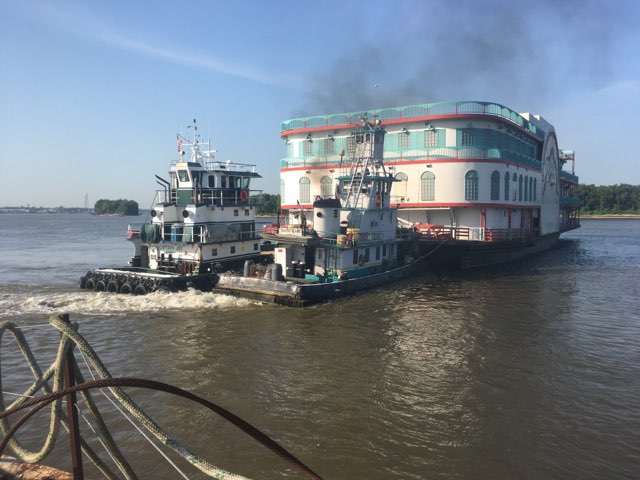 When the owners of the casino boat Argosy IV needed to move their vessel from Wood River, Ill., to New Orleans, La., they contracted with Seven Point Marine Services.

With the assistance of Tug & Barge Solutions, which provided safety and compliance support and acted as a liaison with the Coast Guard, Seven Point Marine worked to secure permits from four Coast Guard sectors to move the 245- by 78-foot vessel with an air draft of 55 feet.

The company used two Seven Point Marine boats, the mvs. Bayou Lady and Captain Jay. The twin-screw, 1,200 hp. Bayou Lady was built in 1961 by Houma Shipbuilding Company and was originally named the Crochet 4 when it was operated by Crochet Towing Company. In 1974, it was sold to Avondale Industries and renamed the Avon I. In 1989, it was sold to American Commercial Lines and renamed the Sandra Nodurft. It acquired its present name in 2012.

The vessels were scheduled to arrive in New Orleans August 12 at the Zito Fleet. The Argosy IV will be loaded onto a semi-submersible boat to India, where it will be refitted and  again serve as a floating casino boat, according to Bert Barrois III, owner and president of Seven Point.

The privately-owned Seven Point Marine was founded in 2007, but with a towing heritage that goes back three generations. Barrois’ grandfather started a company after World War II with a single “Biloxi lugger” providing towing services for oil field customers, mostly offshore.

Seven Point specializes in project cargoes. “We do a lot of work carrying large refinery components,” said Barrois. It also moves military vessels for the U.S. Navy. In 2013, for instance, it moved seven out a total of 12 Navy patrol vessels from Amelia, La., to Beaumont and Houston.