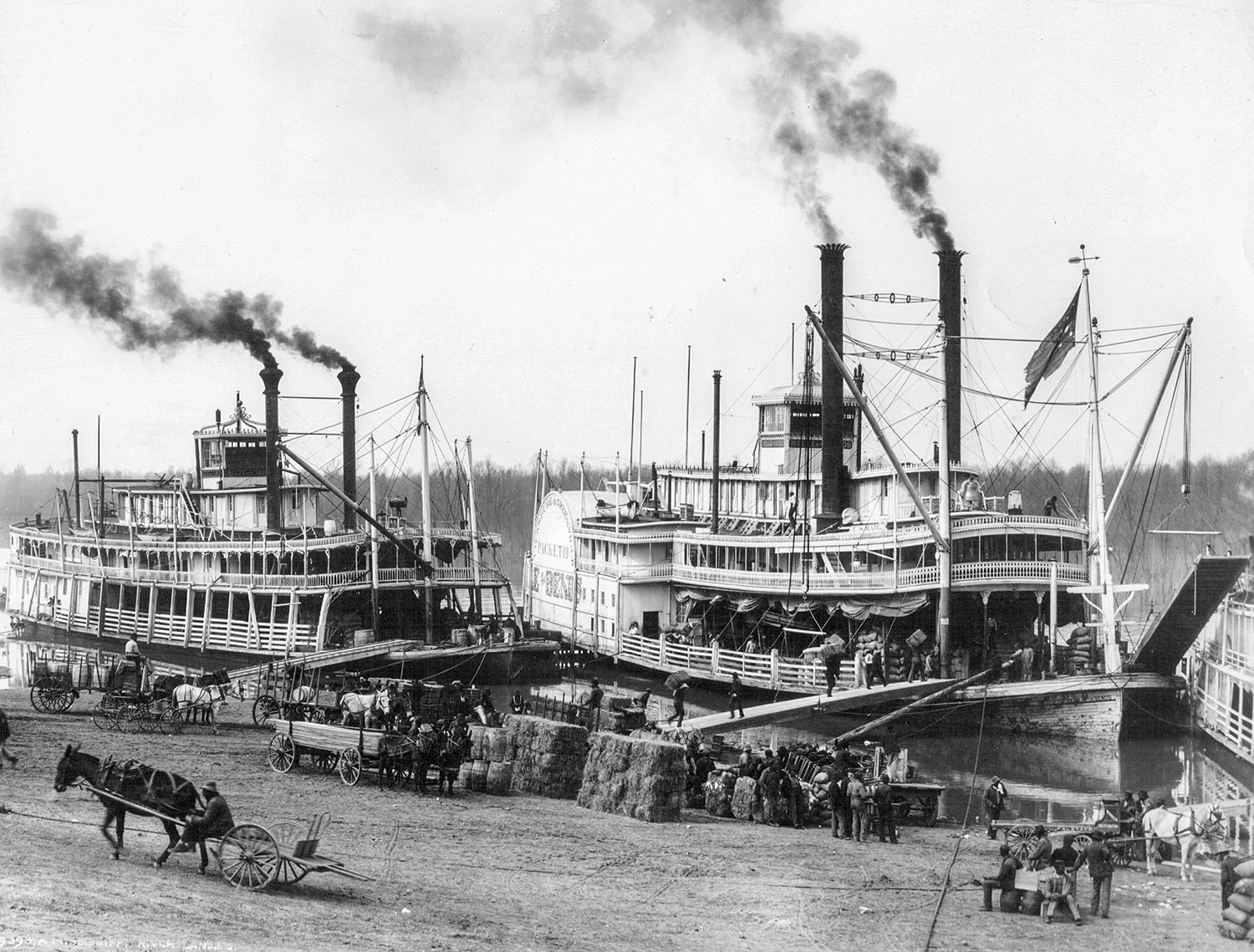 The Vicksburg Wharf In 1906

This week, we visit Vicksburg, Miss., with two vintage views, taken in 1906. One can almost vicariously experience the sights, smells and sounds of the bustling waterfront. At the left is the sternwheeler Belle of Calhoun with the Belle of the Bends towering alongside.

The handsome Belle of Calhoun was constructed at the Carondelet Marine Ways (St. Louis) with completion at the city wharf in 1895. Owned by the St. Louis & Clarksville Packet Company, the boat’s wooden hull measured 180.9 feet in length by 36.4 feet in width. The engines had 16-inch cylinders with a 6-foot stroke.

The riverboat was named for Anna Wood, who was chosen as the “Belle of Calhoun County, Ill.,” in a contest sponsored by the local newspaper.

In the spring of 1899, the Calhoun was sold to the Memphis & Vicksburg Packet Company and its name changed to Julia; by 1905 the original name was restored. The steamboat sank four miles above Alton in the fall of 1914, (incurring the loss of 800 barrels of apples) but was quickly raised, repaired and returned to service. Another sinking, near Hannibal, occurred in 1929, but the vessel was again restored to operating condition.

While laid up for winter at Alton Slough in 1931, the Belle of Calhoun was destroyed by fire.

Belle Of The Bends

A product of the Howard Shipyard at Jeffersonville, Ind., the sidewheeler Belle of the Bends was touted by rivermen as having the grace and grandeur of an Anchor Line boat and of being one of the most well-proportioned steamboats ever built, with near-perfect lines and a model hull of utmost precision.

In his classic 1941 autobiography, Lanterns on the Levee, William Alexander Percy recalls growing up at Greenville, Miss., where he spent considerable time at the river. Percy vividly describes never failing to have a fine choky feeling as he watched the Belle of the Bends steaming into the landing at sunset.

The riverboat was constructed in 1898 at a contract cost of $33,500 for the Vicksburg & Greenville Packet Company. The wooden hull measured 210 feet in length by 33 feet in width. Three boilers supplied steam to engines having 18-inch cylinders with an 8-foot stroke. The side paddlewheels were 26 feet in diameter with bucket planks 12 feet long. The ornate boiler-deck cabin was outfitted with the latest in elegant furniture and included a spacious office and bar.

The steamboat completed its trial trip on Monday, April 11, 1898, and then proceeded south to enter the Vicksburg–Greenville trade. Capt. A.F. Nimitz was master of the boat for some years with Sam Smith (later managing editor for The Waterways Journal) presiding in the clerk’s office.

The Belle of the Bends was chosen as the flagship for a paddlewheeler parade in 1903 to celebrate the opening of the Yazoo Diversion Canal at Vicksburg. In 1907, President Theodore Roosevelt rode the boat across the river from Delta, La., to Vicksburg to deliver a speech.

By 1918, the beautiful packet was converted into an excursion boat by broker Capt. John Klein and renamed Liberty. The once-elegant appearance of the vessel was greatly altered and the staterooms were removed to create a spacious dance floor for excursionists. The boat was dismantled during the autumn of 1919.

Caption for top photo: The packets Belle of Calhoun (left) and Belle of the Bends at the Vicksburg waterfront in 1906. (Photo from Keith Norrington collection.)