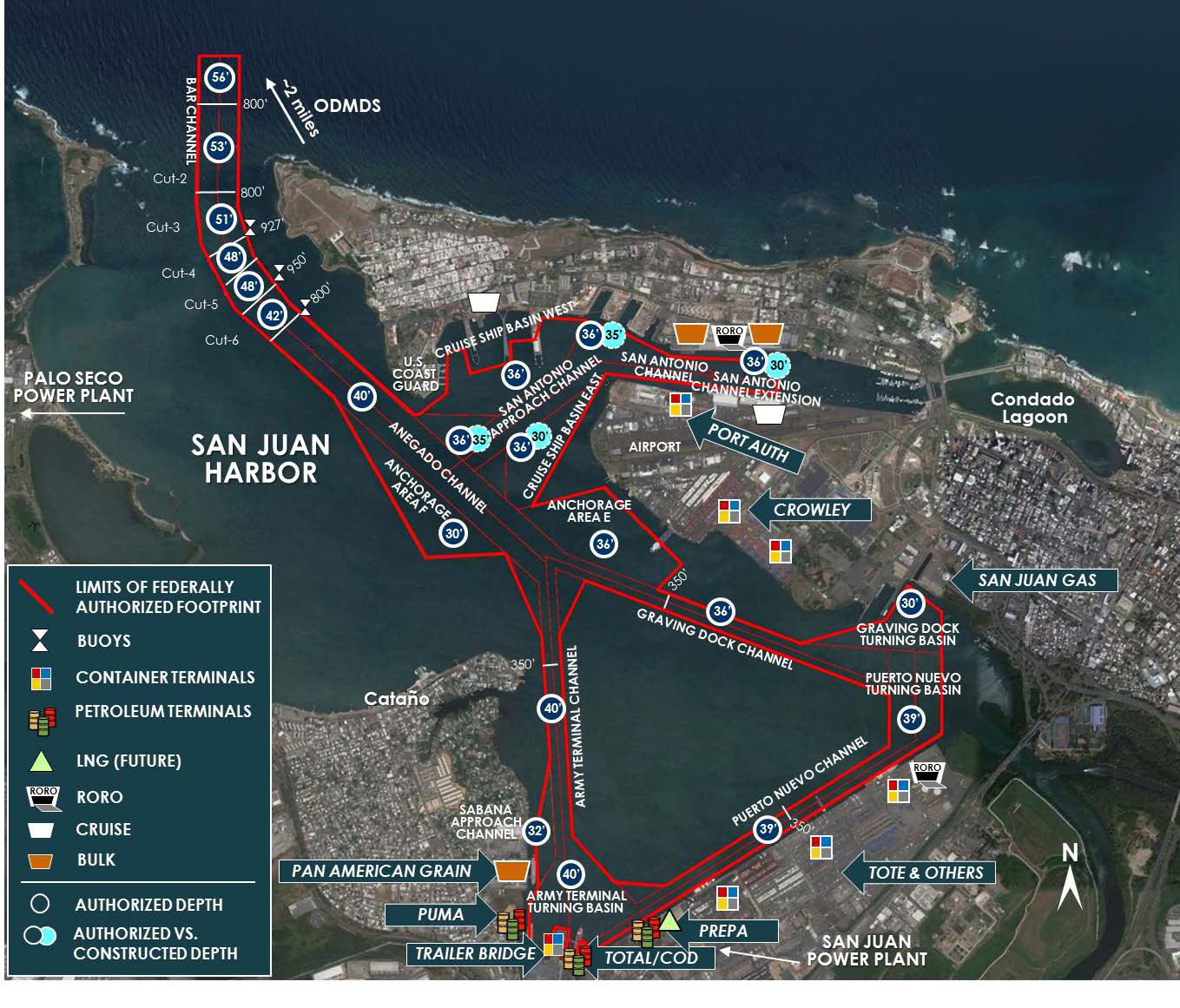 On August 23, the U.S. Army Corps of Engineers Jacksonville District signed the Chief of Engineers Report for the San Juan Harbor Navigation Improvements Study. The Integrated Feasibility Report and Environmental Assessment, which began September 16, 2015, was completed in June.
The recommended plan includes deepening Cut-6 of the entrance channel from 42 to 46 feet, deepening the Anegado Channel, the Army Terminal Channel and the Army Terminal Turning Basin from 40 to 44 feet; 1,050-foot expansion of the San Antonio Channel Extension. The plan also includes deepening the federal channels adjacent to the cruise ship terminals to include the San Antonio Approach Channel and the San Antonino Channel from 35 feet to 36 feet, the San Antonio Channel Extension from 30 to 36 feet and the Cruise Ship Basin East from 30 feet to 36 feet.

The costs for the study are shared between the Corps and the Puerto Rico Port Authority (PRPA), per Section 105 of the Water Resources Development Act of 1986. The study authority came on September 20, 2006, by House Resolution 2764 of the House Committee on Transportation and Infrastructure.

This is the first study completed under the Corps’ 3x3x3 rule, which establishes a three-year timeline and $3 million budget, and review by three Corps levels (the district, the division and headquarters) simultaneously. First, a cost-share agreement is worked out with the local partner, in this case, PRPA, which constitutes the official start to the study, and within 90 days an agreement is reached on the budget and timeline with all three levels of Corps authority. This process was set forth in Section 1001 of the Water Resources Reform and Development Act of 2014. As part of this SMART (Specific, Measurable, Attainable, Risk Informed, Timely) planning modernization initiative a single-day meeting on November 4, 2015, began for the San Juan Harbor study process “to apply a risk-based approach to streamline the study scope and process by eliminating non-essential activities from the decision-making process,” the study said.

Analyses and Modeling
The study included two economic analyses, one based on a potential future project by the Puerto Rico Electric Power Authority (PREPA) to convert its two San Juan area power plants to liquified natural gas (LNG) and one without.

San Juan Harbor is located on the north coast of Puerto Rico and is the island’s principal port. Approximately 78 percent of the Commonwealth’s non-petroleum and non-coal transport come through the harbor. At its current depths, medium range petroleum tankers must light load to access terminals at Army Terminal Channel.

San Juan Harbor has been in use since the colonization of the island by the Spanish. Authorization for federal improvements began with the River and Harbor Act of 1907. The existing navigation project was authorized in 1986 and amended in 1996.

Through deepening and maintenance projects at San Juan Harbor, many geotechnical investigations have characterized the soil back to 1972. The majority of core borings reveal soft clay and stiff plastic clay. Sand and gravel mixes and some hard limestone and sandstone were found. Further geotechnical studies will be done in the upcoming pre-construction, engineering and design (PED) phase.

The recommended plan is estimated to remove 2.2 million cubic yards of dredged material. Based on current geotechnical studies, the Corps team does not anticipate any blasting will be required, but clay can be a challenge in dredging. “Clay can present problems because it can be sticky and tends to clog suction pipelines,” said Steve Conger, Corps engineering technical lead for the project. “Generally, areas where the percentage of shoal material to new work material is higher will be easier to dredge.”

The economic analyses are performed by HarborSym, which was developed by the Institute for Water Resources (IWR) as a planning-level tool for Corps planners. The simulation model is designed to facilitate economic analyses of proposed deep-draft navigation improvement projects in coastal harbors. It uses information on port layout, the physical dimensions of the channel, vessel fleet, commodity throughput, vessel calls, harbor transit rules, trade routes and port operations – all to estimate transportation costs with and without a project implemented. The comparison helps determine potential project benefits.

The Corps also uses the Sea Level Change Curve Calculator to predict relative sea level change. The model helps determine if there may be potential impacts to a project. In 2010, the Corps began using the model, based on three levels – low level rise scenario, intermediate and high rise. The potential impacts on the San Juan Harbor project were minimal, as most channels won’t be significantly affected by sea level rise. One example of a navigation feature that might impact a federal project would be the crest elevation or width of a jetty at an entrance channel. “It’s been a while that the Corps has been looking into sea level change,” Conger said. “That level of scrutiny has increased over time.”

Dredging
The estimates for the study were developed based on the use of mechanical (clamshell) and hopper dredges. The Corps said these types of dredges were used in previous deepening projects at San Juan Harbor. Based on the known sediment type, the majority of the dredging would be done by mechanical dredge. Although the Corps has assumed these dredge types, it does not designate the type or quantity of dredges needed to complete the work. “First and foremost, the way we like to structure the contract is allow for complete flexibility,” Conger said, “so contractors will make that decision.”

He said factors considered in equipment selection include material size and the haul distance. All the material for the San Juan Harbor project will be placed at the ODMDS. “The hopper dredge is most efficient in long straight channels; it picks up material and moves it a fair distance, before placing it in open water,” Conger said.

The study also recommends the use of a drag bar or chain as a clean-up tool, to knock down high spots to achieve the final required grade, rather than re-dredging high areas. The final decision on cost effectiveness depends on the methods of the contractor.

The project did consider some beneficial use options filling dredged holes up to 12 to 15 feet in Condado Lagoon to restore seagrass habitat. A living shoreline to protect the Catano shoreline from wind generated waves and erosion was also considered, but the option cost approximately $13 million more than the base plan, not including the required rock for the shoreline structures. Not enough rock would be generated from the project to supply that material.

The Condado Lagoon project was also essentially cost prohibitive because a local sponsor did not step up to participate in and fund the project. “We had hoped that we could make some beneficial use of the dredged material,” said Ashleigh Fountain, Corps planning technical lead on the project. “We performed some evaluations, but timing is everything.” A local sponsor could step up to support beneficial use during the PED phase, but the federal government will only cost-share those projects with a local sponsor.

The Corps said the PED phase could start as early as 2019, subject to funding. After the Chief’s Report, the project goes before the Assistant Secretary of Army for Civil Works and the Office of Budge and management for review, before the report is sent to Congress for future authorization.