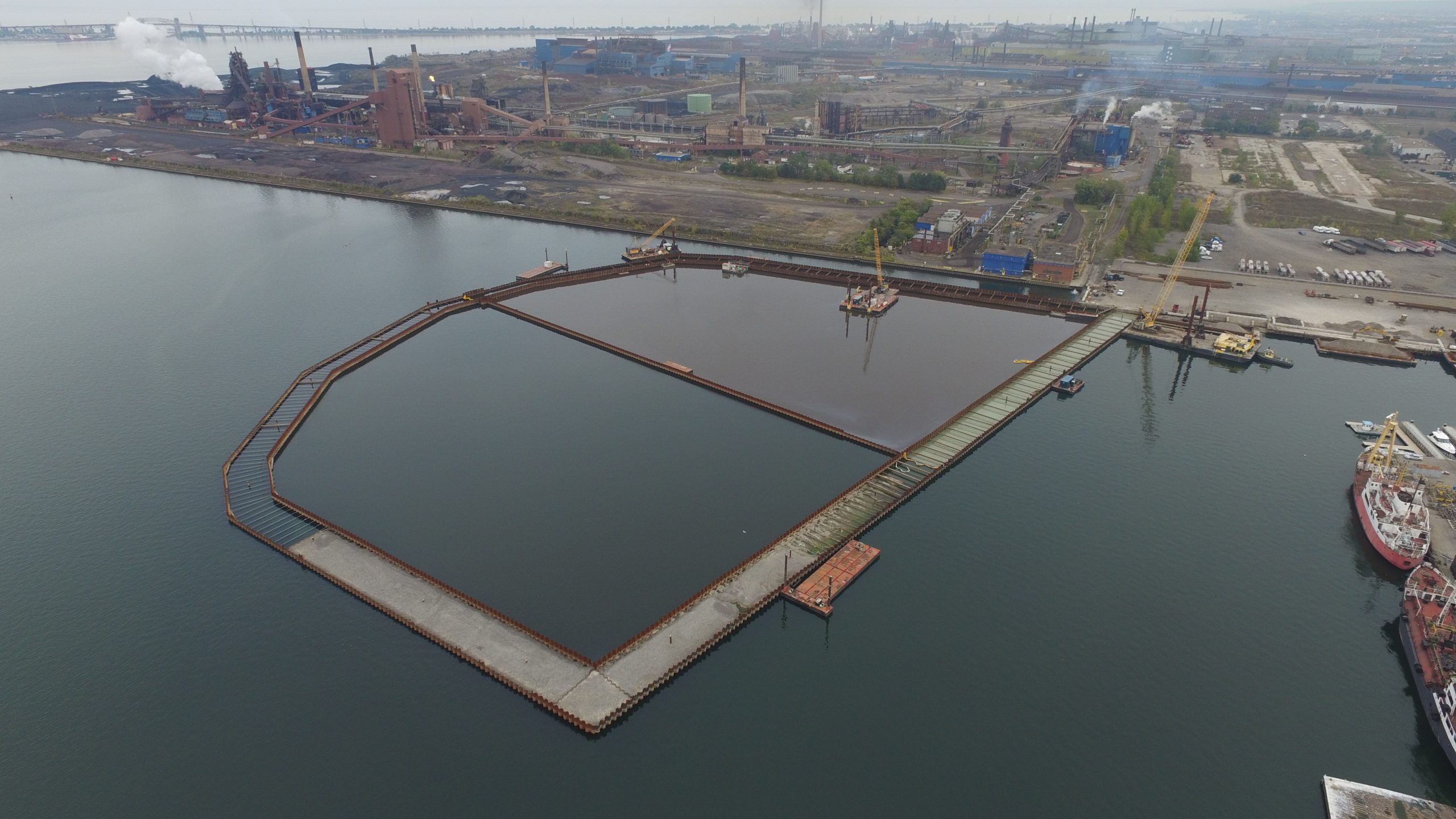 Dredging has kicked off stage two for one of the largest remediation projects that has ever been done in Canada. The contract for the Randle Reef Environmental Remediation Project dredge work was awarded to Fraser River Pile & Dredge (FRPD) with its partner Milestone Environmental Contracting. Public Works and Government Services Canada awarded the contract early this past spring as part of the overall $138.9 million project. The contract for stage two is approximately $30 million.

The Randle Reef site in the southwest corner of Hamilton Harbor is the largest polycyclic aromatic hydrocarbons (PAH) contaminated sediment site on the Canadian Great Lakes. It is approximately 60 hectares (148.3 acres) and contains approximately 695,000 cubic meters (909,025 cubic yards) of sediment contaminated with PAH and other toxic chemicals. The location has had multiple sources of contamination including coal gasification, petroleum refining, steel making, municipal waste, sewage and overland drainage.

The site was first identified for restoration in the late 1980s followed by several years of studies to determine clean-up options. In 2002, a project advisory group reached an agreement to explore containing and capping the sediment. An environmental assessment was started the following year, but as the design for remediation advanced and more information came out on the process, the plans and the assessment kept changing also. According to Roger Santiago, head of sediment remediation unit for Environment and Climate Change Canada, the timeline was long for several reasons.

“After 2003, we did conceptual design work for the project, and as a concept, it was established,” Santiago said. In 2006, the agency put out 30 percent of the engineering design. Ninety percent of the design was done by 2008, and shortly after that the full design went out for tender.
“The first tender was unsuccessful so we had to modify the project a bit and go back out to tender in 2014. At the same time as we advanced and expanded the project, we needed more time to get the full funding in place,” he Santiago said.

Several entities are funding the Randle Reef Contaminated Sediment Remediation project. The federal government and province is paying $46.3 million each, the City of Hamilton, Stelco Holdings Inc. (known as U.S. Steel Canada from 2007 to 2016) and the Port Authority are each covering $14 million, and the City of Burlington and Halton Region are paying approximately $2 million each. While Canada does have a polluter pays policy, Santiago said there was no clear polluter of this site so no mechanism to divide the costs. Additionally, most of the companies that did pollute were no longer in business. Stelco was the only company identified and it voluntarily gave $14 million to the project and provided all the needed steel, from fabrication to transport.

The Randle Reef project was designed to be completed in three stages over seven years. Work began in 2015 and completion is expected in 2022. The Randle Reef executive committee, which is managing the project, is chaired by Environment Canada and includes representatives from the seven project-funding organizations.

“We’re a federal department responsible for the environment and in that capacity, under the Great Lakes Water Quality Agreement we’re given the mechanism to work with other stakeholders to restore impaired Great Lakes areas,” Santiago said.

On July 17, 2015, three contracts were awarded to advance the stage one construction. The contract to build an engineered containment facility to hold the dredged material was awarded to McNally Construction Inc. Dean Construction Company, Ltd. was awarded a second contract to reconstruct a harbor wall at the Hamilton Port Authority’s Pier 15, which would be attached to the Engineering Containment Facility (ECF). The final contract for construction including oversight and monitoring air and water quality during construction went to Riggs Engineering Ltd.

Stage one involved the construction of a 6.2 hectare (15.3 acre) ECF, which is designed to hold contaminated sediment. It is made of 3,400 double steel sheet pile walls, each 33 meters (108 feet) long with outer walls driven to depths of up to 24 meters (79 feet) into the underlying sediment. The outer wall provides structural stability, and the inner wall isolates the contaminated sediment from the surrounding harbor. The walls sit 50-feet apart. The interlocks between the sheet piles on the inner wall were sealed to create an impermeable barrier. This is the first ECF in Canada to contain contaminants with concentrations as high as those found in Randle Reef and the first ECF to completely seal the contaminations from the ecosystem while creating useable land.

Stage Two
Dredging for stage two started in mid-August. This stage includes dredging of priority 1 and 2 (the most highly contaminated) sediment and placing it in the ECF for dewatering.

To start the dredging project, FRPD took delivery of a Damen heavy-duty submersible dredge pump with a leveler head that leaves a flat seabed after dredging. The hydraulic pump is compact and designed for slurry transport moving up to 2,400 cubic meters (3,139 cubic yards) of material per hour. The dredge was chosen because its compact size allowed for dredging sediment between the walls of the ECF. The unit was placed on a pontoon-based crane for maneuverability. Once the sediment was removed and pumped into the ECF, the space between the walls was filled with clean crushed rock.

According to Sarah Clark, president and CEO at FRPD, a project-specific cutter head dredge is being used to remove the contaminated sediments while preserving the underlying clean soils. “We did so for several reasons including the rigid tolerances of the project, the complicated design objectives of the finished grade, to minimize downstream water treatment, to minimize turbidity effects, and to minimize spreading contamination during the project,” she said.

The dredge includes a swing ladder and the ability to interchange a standard cutter head with an auger head to maximize density. In addition to the dredge, FRPD is also using a support vessel and derrick for debris removal.

The dredge will make two or more passes along the bottom of the harbor depending on thickness of the sediment, which ranges from 25 centimeter to 3 meters (about 1 inch to 9.8 feet). The water depth ranges from 4 to 11 meters (13 to 36 feet). Santiago explained that once the design grade elevation is met, grab samples will be taken to ensure the PAH value for disposal (100 parts per million total PAH based on a weighted average) is met. Any area that does not meet the value will be covered with a thin cap of sand designed to mix in and dilute the contaminants.

A discharge pipeline that Clark said is 1,000 meters by 350 milimeters (3,280 feet by 14 inches), will carry the dredged sediment from the dredge pump into the ECF. The pipeline carrying the sediment is submerged in the ECF to reduce the possibility of toxins transferring from the sediment to the air. Once inside the EFC, the dredge slurry will be dewatered through gravity and polymer-assisted settling. The water released from the slurry will be treated by an on-site water treatment system using sand filtration and granular activated adsorption. Once testing shows the water is free of contaminants it will be discharged back into Hamilton Harbor.

Along with the dredging of the harbor, stage two will also cap a channel between the EFC and the neighboring Stelco property. “The Stelco property intake and outfall comes into the channel and we didn’t want to dredge in close proximity to intake and impact operations. We also wanted a safe offset from the wall so operations wouldn’t cause adverse impacts to the wall. We judged it was safe to build 25 meters (82 feet) off,” Santiago said. He continued to explain that an isolation cap will be placed over the area that prevents any migration of contaminants through the cap.

Stage Three
It is anticipated that the ECF will reach capacity with 99.7 percent of contaminants being collected. Once at that point and with all the water removed, the EFC will be capped by several layers of aggregates, geo-textile and geo-grid, wick drains and surface materials, such as asphalt and/or concrete. The layers will be placed sequentially from bottom to top isolating the contaminated sediment while also providing a base support for new port facilities.

“Part of the engineering design will be to find the appropriate consolidation during stage three to build the strength of the compressed sediment allowing it to meet port authority requirements for weight,” Santiago said.

The Hamilton Port Authority will take ownership of the ECF and be responsible for monitoring, maintaining and developing the site, which is expected to have a lifespan of 200 years.

“The port will generate funds for future maintenance and upkeep of the project. In 2022, they’ll assess the needs for the port and what is appropriate for this new upland area,” Santiago said.

The cleanup of Randle Reef is crucial to the overall remediation of Hamilton Harbor and is critical for having the harbor removed from the International Joint Commission’s list of Areas of Concern. Areas of Concern were first identified in 1987 to respond to the clean-up needs of sites around the Great Lakes that were environmentally damaged due to human activities. The United States and Canada established the Great Lakes Water Quality Agreement to address the problem areas. Since 1987, the U.S. has had 26 Areas of Concern and Canada has had 12 with another 5 areas that share the countries’ borders. Of these seven have now been delisted and two are in recovery status meaning environmental monitoring has confirmed the sites’ beneficial uses have been nearly or completely restored.

This is one of the last major environmental projects in Hamilton Harbor allowing it to be delisted as one of the Great Lakes areas of concern. It allows Environment Canada and its partners to meet their obligations under Great Lakes Water Quality Agreement to restore beneficial use to impairments along the Great Lakes.

“This project is an innovative approach. One project has blended remedial approaches where the contained contaminated materials become a beneficial use at an actual port facility that will use the space to generate economic benefit. It is the height of innovative nature what is being undertaken at this site,” Santiago said.