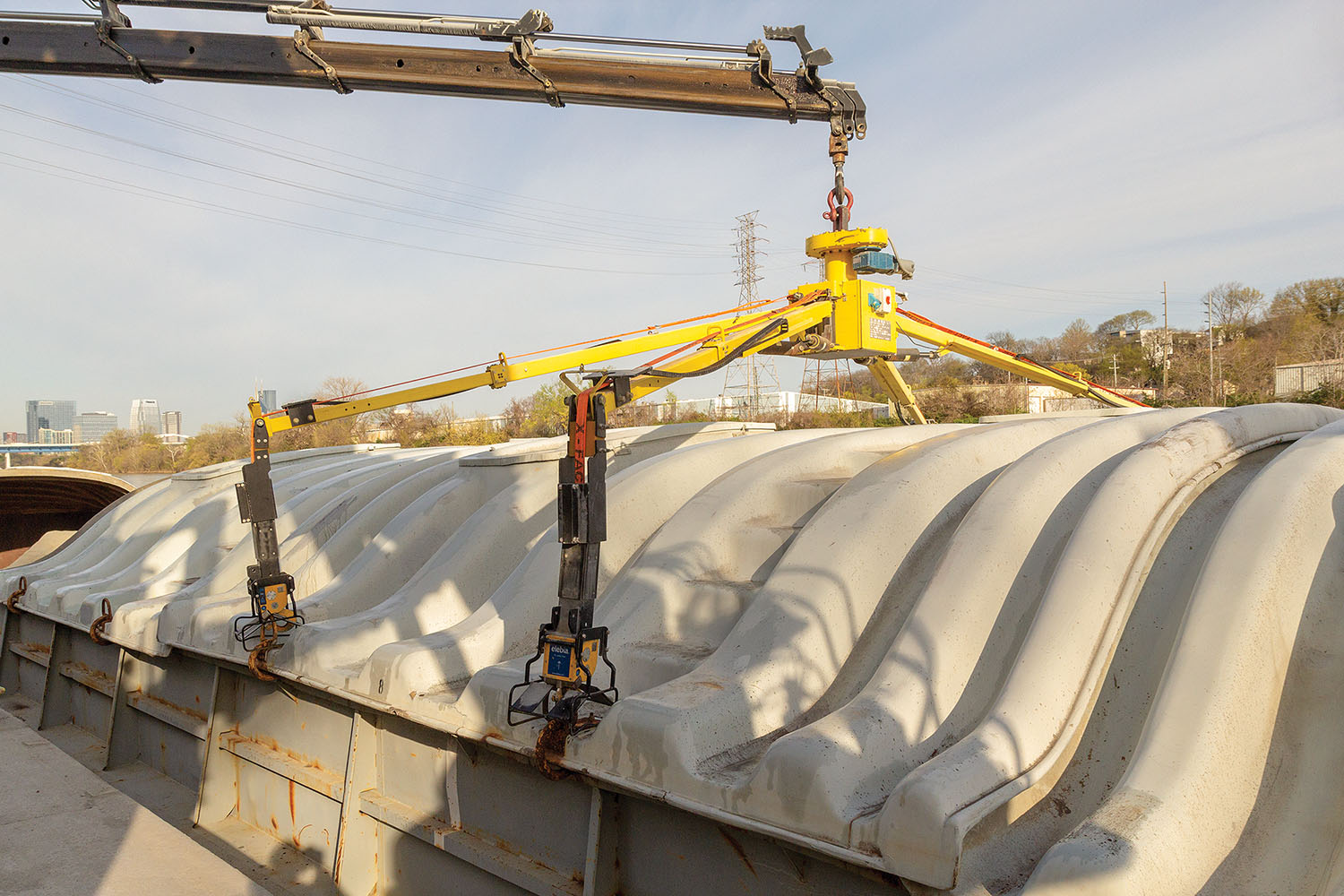 CIS Offers ‘No Boots On The Barge’ Lid Removal System

Safety is key for operators on the nation’s waterways, but for an industry that moves vast amounts of cargoes, ranging from agriculture products and breakbulk to chemicals and hydrocarbons, via steel barges on rivers and canals, a certain measure of risk will always remain. The challenge for safety managers becomes finding innovative ways to reduce that risk.

For fleets, barge cleaners and cargo shifters, one point of concern has always been removing and replacing lids atop hopper barges. The operation typically requires one person to operate a crane or lift, while one or more others climb aboard the barge wearing harnesses and hard hats to secure barge lids with hooks. It’s a process that not only involves risk but also takes time, so finding a way to keep crew members off barge lids would enhance safety as well as boost efficiency.

To meet that need, CIS Marine Division, a subsidiary of CIS Contractors & Industrial Supply Company Inc., has debuted the X-Factor barge cover handling system. CIS boasts that X-Factor can finally help make “no boots on the barge” a reality.

X-Factor’s roots go back around five years. Tom Schiller, president of CIS Marine Division, was working with Shane Bakalyar, terminal manager for LafargeHolcim’s cement terminal in Nashville, Tenn., on a rigging issue years ago. Along the way, the two began to brainstorm other ways to promote safety at the terminal.

“LafargeHolcim was looking for whatever they could do to keep people off barges, because that’s a big safety issue,” said Scott Thelen, marine sales manager for CIS. “One of the biggest issues has always been how to pull the covers off the barges. That’s where Tom and Shane put their minds together.”

Bakalyar took a hook that CIS distributes and designed a four-point barge lid removal system that could be operated remotely. Bakalyar holds the patent for the system, while CIS manufactures, markets and distributes the concept. Bakalyar was granted the patent in September 2016.

“Shane sketched this X configuration and suspended hooks from it, and that’s where this whole concept came from,” Schiller said.

Schiller said X-Factor has been at work at the LafargeHolcim receiving terminal for well over a year.

“What makes me feel really good is we had this thing engineered, built and running within a year,” Schiller said. “And the first one worked, which is pretty amazing. This may be the only terminal in North America where, for lid lifting, no one has to get on the barge.”

To further limit the need for terminal workers to set foot on barges, Bakalyar and the Nashville terminal have partnered with Bobcat to develop a radio controlled “skid steer” device, which is hoisted by crane into the barge and operated remotely from the dock.

Schiller said CIS is working with LafargeHolcim to deploy the X-Factor system to three other terminals: another in Nashville, one in Baton Rouge, La., and a third in the Chicago area. Schiller said the partnership and product development is all about responding to the needs of the industry.

“I’m no expert—I just listen to people,” he said. “All I’ve ever had to do is listen, and our clients will tell you what they need.”

Schiller stressed that X-Factor is about both safety and efficiency.

“Now with X-Factor, the first guy is on the crane making the lift, and the second guy is already working on production,” he said. “He’s no longer going around making connections. He’s doing production work. The efficiency gains are pretty nice.”

The X-Factor system received the 2018 Portland Cement Association’s Safety Innovation Award for unique solutions in the Distribution Category of the cement industry. The award honors the shared effort by LaFargeHolcim US and CIS to improve materials handling and distribution while reducing human risk.

CIS is also working with a large-scale grain terminal operator to stack multiple X-Factors into a system capable of lifting the lids of multiple barges simultaneously.

Concurrent with its rollout of X-Factor, CIS is launching a new product called DraftEye. With the help of LIDAR technology (light detection and ranging via laser pulse), DraftEye can measure the draft, as well as roll, pitch and yaw, of a barge to determine loading capacity.

Again, safety and efficiency are what’s driving development of the DraftEye system.

“Currently, in most cases draft is measured by a tape measure or a stick,” Thelen said. “We’ve developed a system using LIDAR technology to look at the barge and give a very accurate measurement of draft.”

The system allows barge loaders to input the precise dimensions and design of the barge to determine load capacity.

“For those customers looking at drafts in terms of dollars, this gives a very accurate measurement without anyone going on the barge,” said Thelen, adding that the system will be accurate to within half an inch.

Pointing to X-Factor and DraftEye, Thelen and Schiller said CIS goes well beyond the role of mere manufacturer or distributor.

“We’re an integrator, a service company,” Thelen said. “We can help people figure out how to position their barges, provide lifting and rigging design assistance, and offer new safety innovations like X-Factor and DraftEye. Nobody else in the industry is doing what we’re doing.”