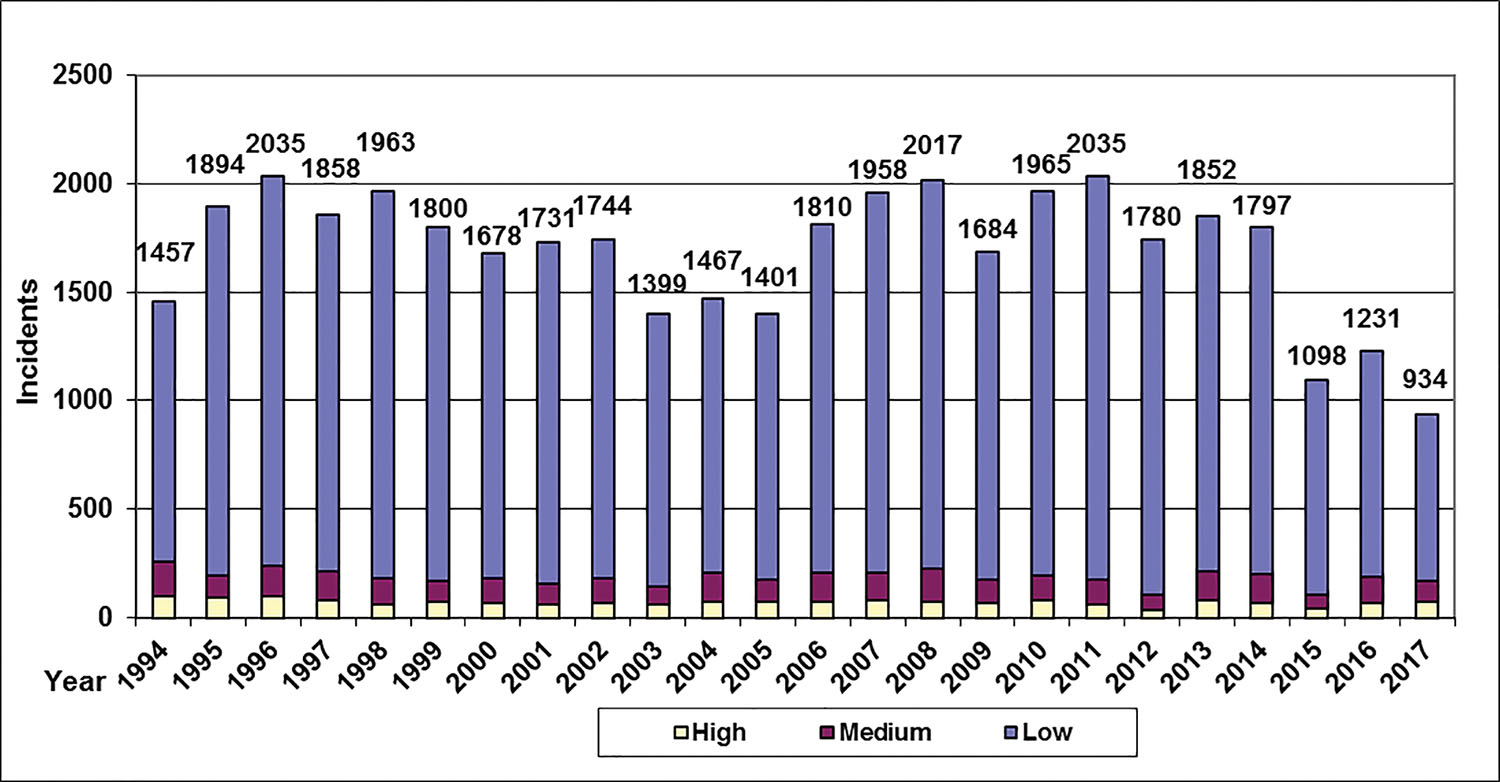 The maritime industry has seen a decline in reportable incidents, including a 24 percent decline in towing vessel incidents in 2017 over 2016, according to a recent safety report.

The report, generated for the Coast Guard-American Waterways Operators (AWO) Safety Partnership’s National Quality Steering Committee by the Coast Guard Office of Investigations and Casualty Analysis, found there were six operational towing vessel crew fatalities in 2017. While 13 deaths were reported to the Coast Guard aboard towing vessels last year, only six were directly related to towing vessel operations. The other seven deaths were due to existing medical conditions and an accidental overdose. Of the six crew fatalities, four were related to two vessel incidents—the October 20, 2017, explosion and fire on a Bouchard Transportation Company’s barge near Port Aransas, Texas, which saw two fatalities, and the December 8, 2017, sinking of the mv. Ricky Robinson near Memphis, Tenn., which also claimed two lives. The other two deaths occurred in separate incidents.

“The Coast Guard-AWO Safety Partnership’s National Quality Steering Committee tracks towing industry safety statistics on an annual basis in order to identify trends and areas in which AWO and the Coast Guard can work together to enhance safety and environmental protection in the tugboat, towboat and barge industry,” said Caitlyn Stewart, AWO director–regulatory affairs. “The data illustrate the significant advances made since the establishment of the Safety Partnership in 1995, and over AWO member companies’ quarter-century journey of continuous improvement to reduce risk and achieve the goals of zero incidents and harm to human life, to the environment and to property.”

The report stated that the committee’s review continues to reflect fewer low severity incidents being reported due to Marine Casualty Reporting Navigation and Inspection Circular (NVIC) 01-15, which clarified reporting requirements. Last year, 82 percent of the total towing vessel incidents reported were classified as low severity. Only 10 percent were classified as high severity.

In 2017, there were 89 injuries onboard a towing vessel or barge, compared to 100 in 2016. The said that between 2016 and 2017, there was a 20 percent decrease in the “most significant” injury category, which combined injuries that were serious, severe and critical in nature. Neither 2016 nor 2017 saw a critical injury.

The “most significant” injury category involve accidents where injuries were sustained due to falls onto a surface, during line handling or being caught in lines, being crushed between objects, and being struck by a moving object on a towing vessel or barge.

“Our member companies recognize that working safely is not just a tagline, but genuinely means that each employee returns home safe, back to their families and livelihoods,” said Brian Bailey, AWO director-safety and environmental stewardship. “Through a thorough review of the available data, the AWO Permanent Subcommittee on Operational Crew Fatalities has been studying the issue of the industry’s operational crew fatalities, paying particular attention to the problem of man-overboard incidents. It has reaffirmed the best practices recommended by the Safety Partnership’s 2012 Quality Action Team on Reducing Fall-Overboard Crew Fatalities.”

Bailey said the permanent subcommittee has generated new recommendations, which will be unveiled at the AWO 2018 Fall Safety Committees’ meeting in Houston, Texas, in October.

“[Crewmember safety] will continue to be a predominant focus for AWO now and in the future,” he said.

In addition to crew fatalities, the report examined gallons of oil spilled from tank barges per million gallons transported. Unlike many other areas that saw declines in incidents, oil spills saw an uptick in 2017 over 2016. However, both years were still significantly lower than 2014 and 2015.

According to the report and Coast Guard records, 84,319 gallons of oil were spilled because of 49 tank barge pollution incidents in 2017 compared to 32,202 gallons spilled in 2016.

The second largest spill last year occurred after a tankerman noticed an accumulation of liquid in a stern containment of a tank barge. Unaware that it was oil, the report said the tankerman opened the scuppers and allowed 1,800 gallons of Utica Crude to spill into the Big Sandy River near Catlettsburg, Ky. This spill accounted for approximately 2 percent of the total volume spilled in 2017, the report noted.

The third largest oil spill of 2017 saw nearly 1,500 gallons of heavy fuel oil spill into Chickasaw Creek, a Mobile River tributary, due to the overfilling of a tank barge. Other, smaller spills made up 1 percent of spills last year.

Established in 1995, the Coast Guard-AWO Safety Partnership is the oldest public-private partnership between the U.S. Coast Guard and its stakeholders. Since its establishment, the partnership has launched more than 40 cooperative initiatives to improve safety and environmental protection. Recent accomplishments, according to the partnership, include a comprehensive analysis and recommendations to reduce towing vessel crew fatalities, the establishment of a first-of-its-kind industry training program for Coast Guard Academy cadets, and the leadership of the Towing Vessel Bridging Program, under which thousands of towing vessel examinations have been conducted to facilitate the transition to towing vessel inspection.