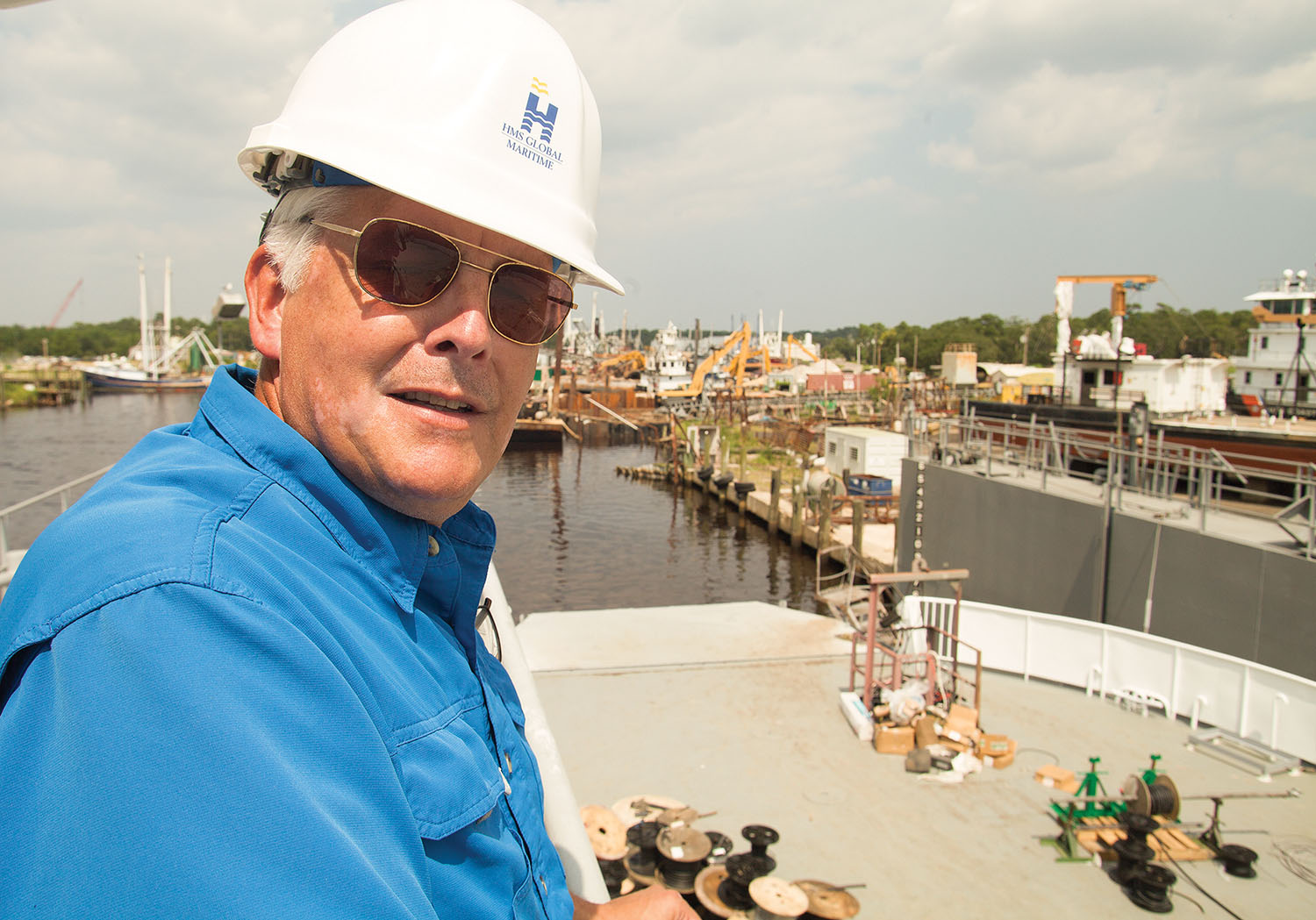 Tucked onto a drydock at Master Marine’s shipyard in Bayou la Batre, Ala., is a first-of-its-kind in the United States project that’s nearing completion. Since early summer, the Gee’s Bend Ferry, an 18-vehicle ferry that shuttles residents between the rural Alabama towns of Boykin (also known as Gee’s Bend) and nearby Camden, has been undergoing a total repower and retrofit. Once complete, the Gee’s Bend Ferry will be the first all-electric passenger ferry in the United States.

The Gee’s Bend Ferry, and the community it serves, has a rich and complicated history. Boykin’s alternate name comes from Joseph Gee, a landowner who settled in the area in 1816 to begin a cotton plantation. Gee moved from North Carolina with 18 slaves. After Gee’s death, Mark Pettway, a relative, bought the plantation, operating it with a labor force of more than 100 slaves.

After the Civil War, many of those former slaves continued to work in the area as sharecroppers. The Pettway family owned the plantation until the 1890s, and to this day, Pettway remains a common name in the majority African-American community.

Boykin, as the crow flies, is just 6 miles from Camden, the county seat. But because Boykin is located in the middle of an oxbow on the Alabama River, residents must make a 38-mile trip by car to Camden. The ferry between the two communities was first established prior to World War 2. However, segregationists terminated the service in 1962 during the Civil Rights Movement in an effort to prevent Boykin residents from registering to vote. The current Gee’s Bend Ferry was built in the 1990s, but due to navigation and operational issues, the service wasn’t restored until 2006, when the Alabama Department of Transportation (ALDOT) hired Hornblower Marine Services (HMS) to manage and operate the ferry. Now, HMS Ferries Inc. operates the Gee’s Bend Ferry and ferry services on Mobile Bay.

And while the past will always be part of the story of the Gee’s Bend Ferry, HMS Ferries, the Environmental Protection Agency (EPA) and ALDOT are working to make sure the next chapter in the ferry’s history is innovative and future-focused. To make that happen, HMS Ferries had to start from scratch on board the ferry.

“For all practical purposes, the entire vessel has been gutted,” said Tim Aguire, general manager of HMS Ferries Alabama. “It’s the hull and the superstructure. Visually, the vessel is the same. But all the internal mechanisms—the engines, the generator, the hydraulic power units—all that stuff was removed and is being replaced with a new system.”

“Obviously, there’s no more fuel tanks, so we’re having to carry some water ballast,” Aguirre said.

The ferry’s fuel tanks have actually been converted to ballast tanks to account for the lost weight as a result of the conversion project.

At Master Marine, workers have extended the ferry’s port and starboard deckhouses a bit. Those two deckhouses will now house the Gee’s Bend Ferry’s two battery banks. Atop each house sits air conditioners, necessary for keeping the the battery banks within a particular temperature range.

“One of the challenges is to extend the life of these very expensive batteries,” Aguirre said. “The batteries are one of the big cost drivers. To extend their life, you want to keep them environmentally between 50 and 90 degrees, averaging about 70.”

The houses for the battery banks are outfitted with a NOVEC 1230 fire suppression system.

The pilothouse is also being completely rebuilt, with identical control stations both forward and aft.

Aguirre thanked the Coast Guard for being an eager partner with HMS Ferries throughout the conversion process.

“One of the reasons this has been successful is we brought the Coast Guard in right away,” he said. “We started talking to the Coast Guard both locally and at the Marine Safety Center level right away, so they knew what we were doing and they were advising us on how to go about it. They’ve been so helpful throughout the process.”

Aguirre added that the entire project is a win for involved parties.

“EPA, through the clean diesel program, is getting to invest in a program that is, hopefully, significant industry wide,” Aguirre said. “Because it’s the first of its kind, we’re the ones working with the Coast Guard and getting these regulations passed, so that other 100-percent-electric vessels can follow with less effort. ALDOT has a ferry that’s part of its system that Alabama can be proud of. And HMS benefits by getting to be part of something that’s a first of its kind.”

Aguirre also thanked the contractors, partners and suppliers that are part of the project. Batteries aboard the vessel are from Spear Power Systems. American Traction Systems provided the power electronics. Marine Interface handled the systems integration. Glosten is the naval architecture firm involved, and HMS Consulting is the project manager. EPA helped fund the conversion through its Diesel Emissions Reduction Act (DERA) grant program. Cochran Marine installed the charging stations at each ferry landing. Power supply at the terminals will come from Alabama Power and Pioneer Electric Cooperative.

Aguirre, who came to HMS Ferries three years ago following a career in the Coast Guard, said ALDOT, EPA and HMS Ferries have been working on the conversion project for about 2.5 years.

While the Gee’s Bend Ferry will be the first all-electric passenger ferry in the country, the conversion project is part of a worldwide trend toward electric propulsion, according to Ed Schwarz, vice president of sales for ABB Marine & Ports.

Schwarz said the maritime industry in the United States is really being driven by trends worldwide with regard to electric propulsion systems and technology integration. Norway, and Europe in general, have taken steps to limit diesel-powered ferries in favor of electric propulsion. That transition is pushing the U.S. market forward, he said.

“The technology is available, it’s commercially viable, and owners know that,” Schwarz said.

What’s more, energy storage is a cost that will go down over time as technological advances take place, Schwarz said, unlike the cost of fossil fuel and mechanical engine maintenance, which go up over time.

And the advantages of electric propulsion and energy storage aren’t just for short-distance ferries. For vessel owners involved in longer hauls, Schwarz said a hybrid, diesel-electric system might make sense.

“Once you go diesel-electric, it opens you up to all these different types of energy storage,” Schwarz said. “Battery is the most common, but we’re also doing a lot of work with hydrogen fuel cells.”

Schwarz said ABB will work with vessels owners looking to do both new-build and repower programs. ABB can analyze a vessel’s current propulsion system, identify an operational profile, then customize a power solution to gain fuel efficiencies, reliability and redundancy an electric system can provide.

“At ABB, we’re agnostic about the technology,” he said. “We can offer all the types of electric systems, whether it be a diesel-electric AC system, a fully electric battery system—we can offer all of those.”

Moving forward, Schwarz said he sees a total integration of the power system, from power generators shoreside all the way to the batteries on board vessels to the propeller driving the vessels. He said the shift in operational mindset will be crucial for companies to remain competitive.

“You can’t be viable and still be operating a steamship,” Schwarz said.