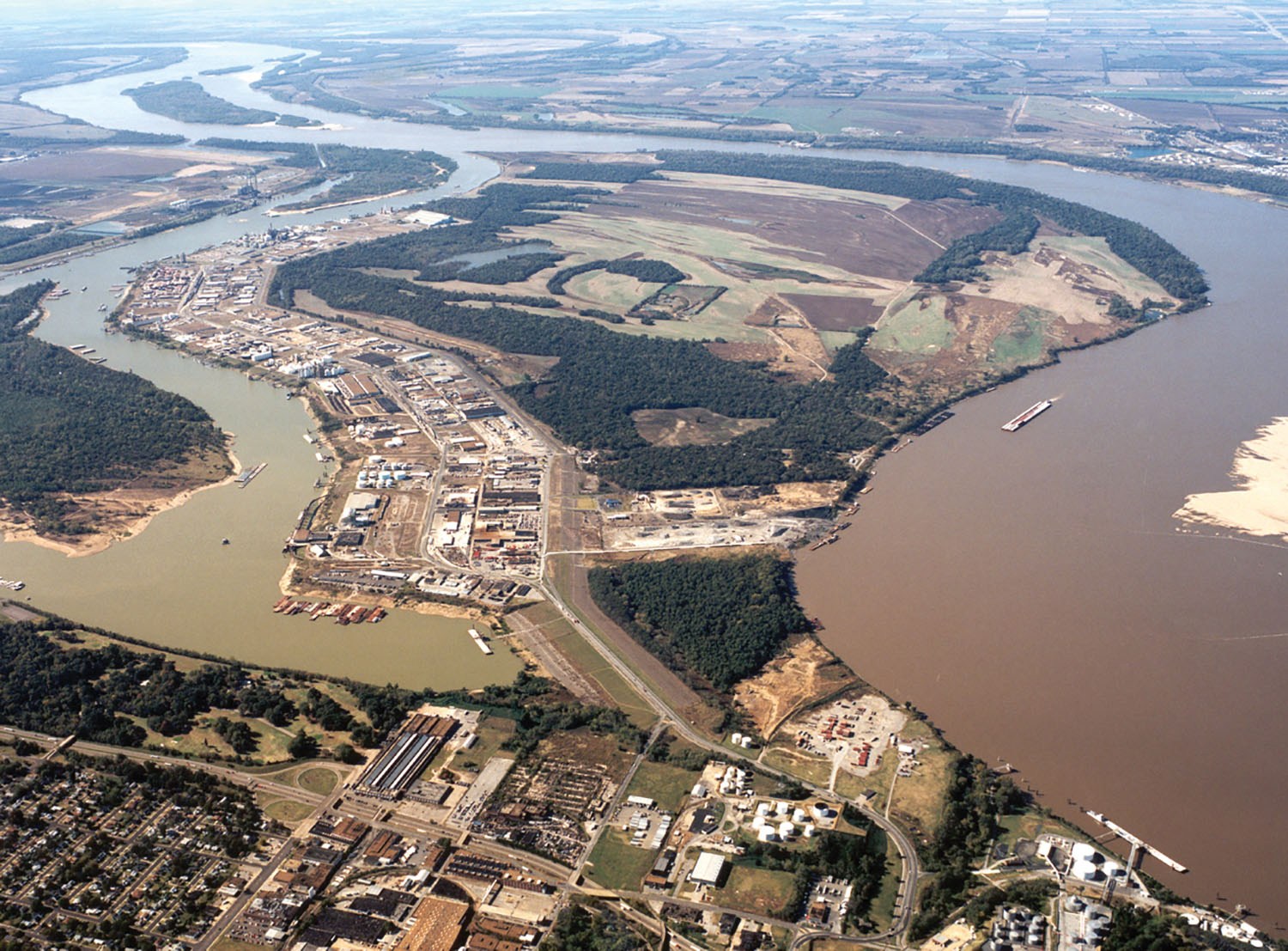 Like many other riverports and manufacturing centers, the Memphis, Tenn., area economy has been growing at a welcome clip recently. Unemployment is at historic lows, and some employers are having trouble finding enough employees.

“The economy in the Memphis area has been growing at an accelerated rate in the last one-and-a-half to two years,” said James “Randy” Richardson, executive director of the Memphis and Shelby County Port Commission. Richardson is also vice president of port and industrial properties for the Economic Development Growth Engine (EDGE), the regional development agency.

As for the effects of President Trump’s tariffs, said Richardson, “It is a mixed bag. The domestic steel production business, up and down the river, seems to be benefiting greatly from the leveling of the pricing with Far East producers,” he said.

However, the reciprocal tariffs against agricultural produces have depressed pricing to the point where many soybean farmers are stating that they will be losing substantial money on the crop this year.

“Overall,” he said, “the issues related to the tariffs do not seem to be hampering economic growth in the port or the Memphis area.”

The big news in Memphis this year was the May 1 opening of the Tennessee Valley Authority’s (TVA) massive Allen Natural Gas Plant.

The plant replaces the coal-burning Allen Fossil Plant. Both are located in the Pidgeon Industrial Area, just south of President’s Island. The new plant, first announced in 2014, was part of a 2011 settlement with the Environmental Protection Agency (EPA) to resolve Clean Air Act violations at 11 coal-fired plants in Alabama, Kentucky and Tennessee. That agreement required TVA to invest between $3 billion and $5 billion in those states at the time.

The Allen gas plant is known as a combined-cycle plant, meaning it captures waste heat from the first burn cycle to turn steam turbines for additional energy. “Taken together, the $900 million investment will generate roughly 1,000 megawatts of power—or enough to power more than 500,000 homes and businesses in the region,” according to a statement from TVA.

The shift to gas has had a big effect on coal barge cargoes. Richardson points out that as a landlord port, the Port of Memphis does not keep tonnage statistics like operating ports. It relies instead on the Corps of Engineers’ Waterborne Commerce Statistics, which typically run a year-and-a-half to two years behind.

“The total [cargo tonnage] was 12,184,000 tons in 2016,” Richardson told The Waterways Journal.  “While we did increase over 2015, we will see a significant decrease in part of 2017 and all of 2018 [when the Corps’ tonnage figures are updated] because the TVA coal plant has been closed and a new, billion-dollar, natural gas electric generating plant has been opened. This will amount to an immediate decrease of 1.5 to 1.8 million tons of coal product.

“However, the Memphis metro area will easily be in air quality attainment for the foreseeable future.”

For the port itself, the big news is the upcoming release of its new Master Plan, which Richardson will present to the port commission on October 17. The engineering consulting firm Pickering, founded in 1946 and based in Mississippi, has been leading the effort to develop it (WJ, April 24). Pickering’s partner in the effort has been Moffatt & Nichol, a global infrastructure advisory firm that provides solutions to clients in the marine terminal, transportation, energy, environmental, federal and urban development markets.

Port commission member and EDGE board member Johnny Moore told local media that the Master Plan would guide the port “as we seek to repurpose [it] and position it for continued viability for the next 20 to 50 years.”

In 2014, a report on the economic impact of the Port of Memphis was prepared for the port commission by Younger Associates. That report estimated the annual economic impact of the port, the Memphis and Shelby County Port Commission and its tenant businesses as $8.46 billion. Richardson said that figure today is closer to $9.1 billion.

Memphis’ location has long made it a focus of plans for container-on-barge (COB) operations. In 2004, Osprey Line made Memphis one of the foci of its business moving empty containers to the Gulf.

The next year, 2005, Osprey reported the largest single unit tow container movement in the history of the inland waterway system, a 15-barge tow loaded with 375 containers (750 TEU) of agricultural products from Memphis to New Orleans and Houston. Photos of that movement were used for years to illustrate white papers and presentations on COB.

But despite such proofs of concept, and strong support from the Maritime Administration, getting widespread market acceptance from shippers has continued to present challenges. A 2008 COB concept paper from the Port of Pittsburgh included that picture of the Osprey move, but articulated the ongoing challenge of promoting COB: “How do you get the container-on-barge service without market demand? Conversely, how do you create market demand without the container-on-barge service being readily available?”

More recently, American Patriot Container Transportation is changing the COB game by building purpose-built vessels that will move containers more efficiently and at lower cost than traditional barges. Along with St. Louis, Mo., and the Port of Plaquemines, La., Memphis is a major hub of container movements planned by American Patriot Container Transportation.

Richardson continues to support COB. “Container-on-barge and vessel will eventually happen,” he said. “The question for the last 25 years has been when. I have seen dedicated movement of containers occur on several occasions in my 28 years at the port.

“The decrease in truck drivers and the increased driver restrictions, combined  with increased capacity of the Panama Canal, have opened a window of opportunity to move containers in the inland river system. This could be a game changer for the network. From a transportation point, it could expand the Gulf Coast into the heart of America.”

“To achieve a long-term intermodal movement by water, the bottom line is it will have to compete in the transportation market place,” Richardson emphasized. “To make this happen, container on vessel will need to provide a reliable, higher speed, dedicated service that can carry large numbers of containers at a reduced operating cost as compared to today’s barges and towboats.

“There will be two major hubs in Memphis and St. Louis, with feeder hubs up and down the Mississippi River tributaries. If the container-on-vessel project continues, we are looking at creating a 400-plus acre facility within the Pidgeon Industrial Area along McKellar Lake. This will be a game changer for the region.”

Richardson said the drive by the city to redevelop the waterfront is one of the most hopeful developments he has seen during his tenure.

“There is a renewed push to develop the riverfront to attract and involve citizens in nature as it relates to the river in Memphis,” said Richardson. “The Memphis River Parks Partnership organization has recently released a multi-phase plan to encompass most of the riverfront in downtown. Construction is underway on phase 1.”

In some other riverports, these plans have led to conflicts between groups that want to preserve industry and those who want purely recreational uses.  But due to its unique history, Memphis has been able to avoid those conflicts and is able to pursue both types of development simultaneously.

That is partly because of a waterfront legacy that goes back more than a hundred years. According to Richardson, a big central cobblestoned chunk of the Memphis waterfront was once privately owned by one of the city’s then-patriarchal families. When the family deeded it in trust to the city, one stipulation was that the cobblestones remain in place. The result was the preservation of most of the waterfront.

“There was industry to the north and south of that section that wasn’t covered by the trust agreement,” said Richardson. “Eventually, much of the industry to the north moved out over time.” Today, 95 percent of the port’s industries in the International Port of Memphis are located on President’s Island and in the Pidgeon Industrial Area.