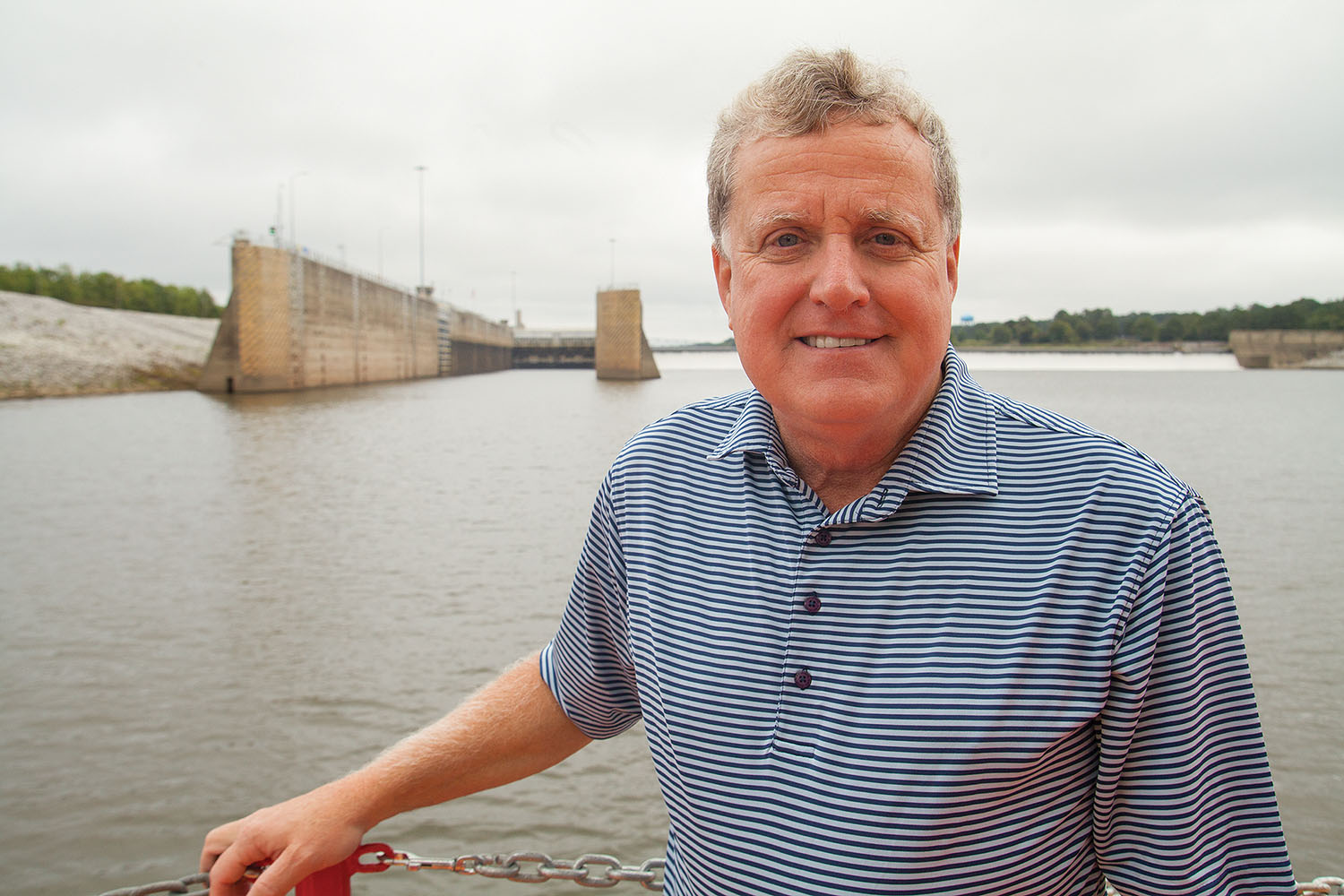 Hensley Retires From Corps After 43 Years

A crowd of business and U.S. Army Corps of Engineers leaders gathered at Parker Towing Company’s dock in Tuscaloosa, Ala., the morning of September 28 to tour the Black Warrior River as part of an industry familiarization tour arranged by the Warrior-Tombigbee Waterway Association and the Tennessee-Tombigbee Waterway Development Council. Among the Corps representatives was Danny Hensley, longtime operations project manager for the Black Warrior-Tombigbee and the Alabama-Coosa waterways, who was retiring that very day.

With the Corps’ mv. Lawson pushing the crane barge Choctawhatchee first downriver through Oliver Lock and past Hunt Oil Company’s refinery, then back upriver to the Nucor steel mill near Holt, it was a fitting sendoff for the 43-year veteran of the Corps of Engineers.

A native of Ellijay, Ga., Hensley went to college to study engineering and originally wanted to be a land surveyor. That changed in mid-1973 when Hensley took a summer construction job working at Carters Dam, the massive earthen dam and hydroelectric plant on the Coosawattee River near Ellijay.

“When I was going to college, I worked the summer for a construction company that was building the reregulation dam at Carters Dam in Georgia,” Hensley said. “I found out about the Corps, so I came back when the opportunity arose and started working for the Corps and finished up at night school.”

Hensley earned his engineering degree while working full time for the Corps during the day and attending the last two years of college at night. From that summer when Hensley learned about the Corps to his last day on the job September 28, he never looked back.

For his first 10 years or so with the Corps, Hensley stayed close to home, working as a park technician and park ranger at Carters Lake. Then in 1985, he moved to Tuscaloosa, where he started out as the park and natural resource manager at Holt Lake. He worked there 10 years before moving into the project management office, located on the Black Warrior River near downtown Tuscaloosa and the University of Alabama campus. Hensley served as park manager and as assistant operations project manager prior to becoming operations project manager in 2004.

Hensley’s broad background in engineering, park management and navigation proved a perfect fit for the Black Warrior, Tombigbee, Alabama and Coosa rivers. The six locks and dams on the Black Warrior-Tombigbee Waterway create lakes popular for fishing, recreational boating and camping, in addition to being one of nation’s high-use inland waterways. Commercial shippers transport about 20 million tons of cargo on the Black Warrior-Tombigbee Waterway each year. The Alabama River Waterway, on the other hand, is a low-use waterway with very little commercial activity, but it produces hydropower at two Corps-operated powerhouses and sees its share of recreational use.

“I believe it’s been very helpful for me to manage both a high-use waterway and a low-use waterway, seeing the differences between the two, the management needs you have on each, and the different capabilities you have for putting resources into them,” Hensley said.

Hensley’s 14 years as operations project manager have been busy ones. During his tenure, the Corps team has upgraded all three spillways on the Alabama River to allow for remote operation. The four gated spillways on the Black Warrior-Tombigbee Waterway have been updated with new control systems with two upgraded for remote operation. Also, a new upland dredge material disposal area was constructed on the Tombigbee River at a shoaling area called Buena Vista.

On the Black Warrior-Tombigbee Waterway, the lower miter gates at Bankhead, Holt and Selden locks have all been replaced under Hensley’s leadership, with Holt’s lower miter gate replaced this past summer.

“That’s been good for the waterway, and there are still a couple that need replacing,” he said. “We need to replace the lower gates at both Demopolis and Coffeeville.”

Last year, Hensley’s team oversaw the construction of training dikes near Jackson, Ala., at a place on the Tombigbee River where shoaling and a sharp turn in the river at a railroad bridge made navigation extremely difficult.

“With the training dikes, we haven’t had the shoaling occurring that had interfered with passage of tows under the railroad bridge. In the past we had to dredge every year to provide alignment of the navigation channel under the railroad bridge,” Hensley said. “Not only are we saving dredging money, but it’s also better from a reliability standpoint because shoaling is not causing misalignment of the navigation channel under the bridge.”

Hensley said additional navigation channel work is in the queue for a one-mile stretch on the Tombigbee River at Sunflower, also near Jackson, where modeling indicates advance maintenance dredging at the site could significantly reduce shoaling and regular dredging needs.

A new project management office is also expected in the future on a site adjacent to the team’s current office in Tuscaloosa.

Hensley said he came close to retiring about this time last year. Had he done so, he would’ve missed out on two major assignments: replacing the lower miter gate at Holt Lock and aiding in Puerto Rico’s recovery from Hurricane Maria.

“Holt was a big part of it,” Hensley said. “It was a $12 million job to replace the lower miter gate at that high-lift lock. The gate leafs had been in the fabrication shop a couple years, and I wanted to go ahead and see them installed. We did that closure in July and the first part of August, so the end of September seemed like a good time to go—and it’s the end of the fiscal year too.”

When he signed on for one more year last year, he couldn’t have known he’d be going to Puerto Rico for two tours, but that’s where he spent more than three months during the past year. The two tours in Puerto Rico were Hensley’s first missions outside the mainland United States in his career with the Corps.

“Being a part of the Hurricane Maria disaster recovery mission in Puerto Rico was a rewarding experience,” Hensley said. “The days and weeks seemed long while I was in Puerto Rico, but it seems satisfying when thinking back on it now. We provided assistance to families that were left in difficult situations following the hurricane.”

“It was also a good experience to meet and work with other responders from across the U.S. that were working with the Federal Emergency Management Agency and the Corps of Engineers in disaster recovery efforts,” he said.

Standing on the bow of the Choctawhatchee during the September 28 tour, just hours before officially retiring, Hensley said he was planning to take it easy on October 1, his first weekday of retirement.

Hensley said he and his wife, Carol, plan to do some traveling, do more boating and fishing from their home on Lake Tuscaloosa, and spend time with family, including their 7-year-old grandson and daughter in Hoover, Ala., and their son, who lives in Northport, Ala.

Caption for photo: Danny Hensley, retired operations project manager for the Black Warrior-Tombigbee and Alabama-Coosa Waterways, aboard the Corps’ crane barge Choctawhatchee September 28, the day of his retirement. Oliver Lock and Dam on the Black Warrior River is in the background. (Photo by Frank McCormack)