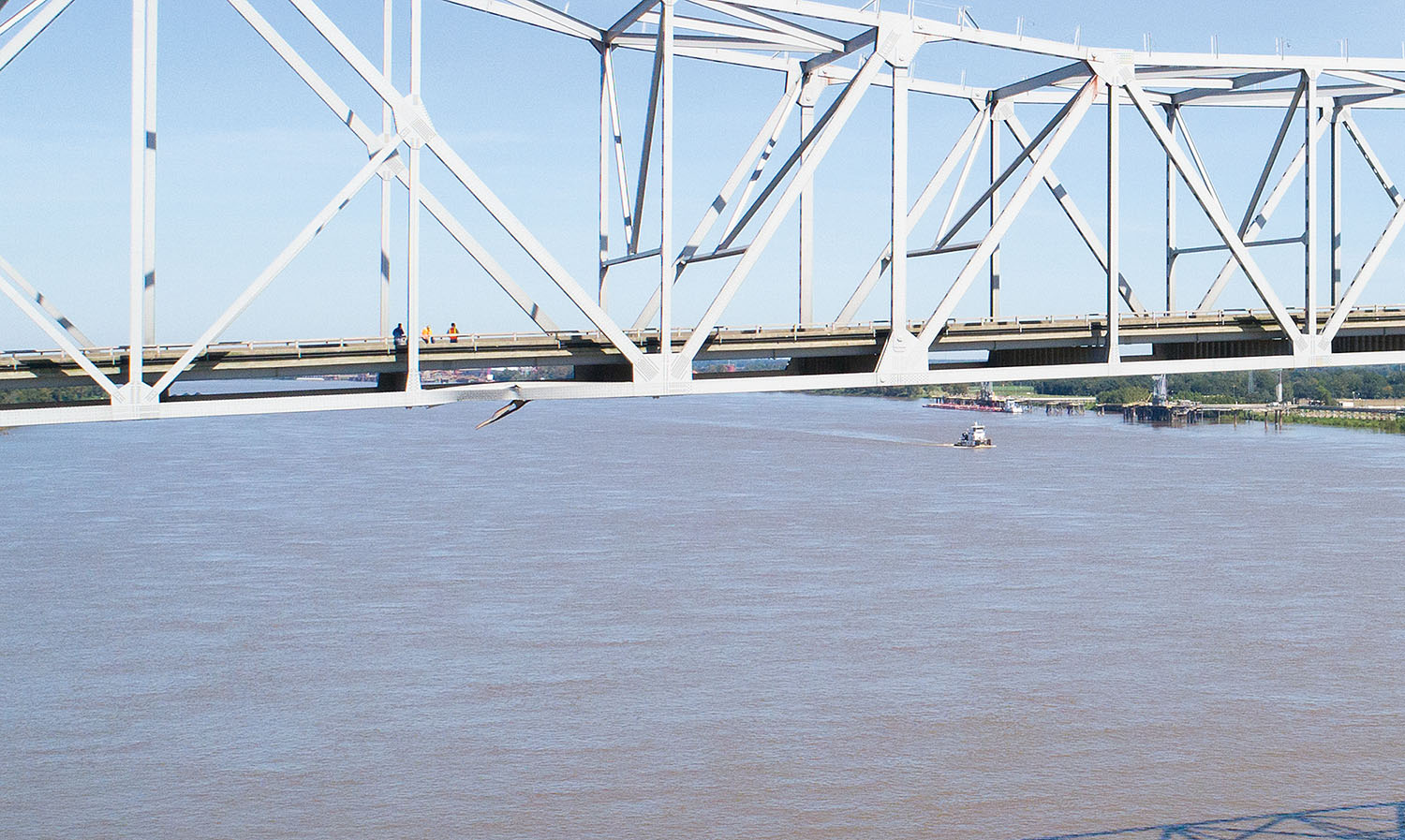 The Sunshine Bridge over the Lower Mississippi River, located in St. James Parish, La., between Welcome and Burnside, remained closed to vehicles last week after being struck October 12 by a barge-mounted crane.

The mv. Kristin Alexis, part of Marquette Transportation’s Gulf-Inland fleet, was headed upriver in the early morning hours of October 12, pushing a barge-mounted crane in the raised position. The crew was piloting the Kristin Alexis toward the west bank or alternate span of the Sunshine Bridge. According to Alexandria Preston with U.S. Coast Guard Eighth District’s External Affairs Office, the crane struck the bridge at about 2:45 a.m.

The crane was freed from the bridge that morning, but extensive damage was done to that span of the bridge. While the waterway was never closed to navigation, the bridge was promptly closed to vehicular traffic—and it remains so for the foreseeable future.

Engineers with Louisiana’s Department of Transportation and Development (DOTD) discovered that the impact from the crane damaged significant load-bearing components of the bridge. According to an announcement from DOTD, the timeline for reopening the bridge “is believed to be months rather than days.”

“The damage is to key members of the bridge and has rendered it unsafe to traffic,” DOTD Secretary Shawn Wilson said in a statement. “While we have identified a contractor and are moving forward with expediting this work, it is important to know there is not an easy fix for this kind of damage. There is no temporary fix that will allow us to safely open the bridge.”

With the bridge closed, about 25,000 commuters per day are having to identify alternate routes throughout the region. The nearest bridge crossing upriver from Sunshine is the I-10 bridge in Baton Rouge, more than 30 miles (40 minutes) north. The Plaquemine ferry is a 28-mile (40-minute) drive. Downriver, the nearest bridge crossing is the Veterans Memorial Bridge in Gramercy, a 20-mile (25-minute) drive. The closure has affected everything from emergency services to school schedules and everyday commutes.

DOTD is partnering with local law enforcement and Louisiana State Police to alter traffic patterns and boost operating hours at the Plaquemine ferry to help mitigate the significant traffic issues due to the closure. A second ferry has also been added at Plaquemine.

For the most up-to-date ferry schedules or traffic announcements, Louisiana residents can call 511 or go the DOTD.LA.gov.

As to the cause of the allision, that’s to be determined.

“The cause of the incident is still under investigation, so we can’t speculate on the cause,” Preston said. “The vessel was upbound on the river at the time of the incident.”