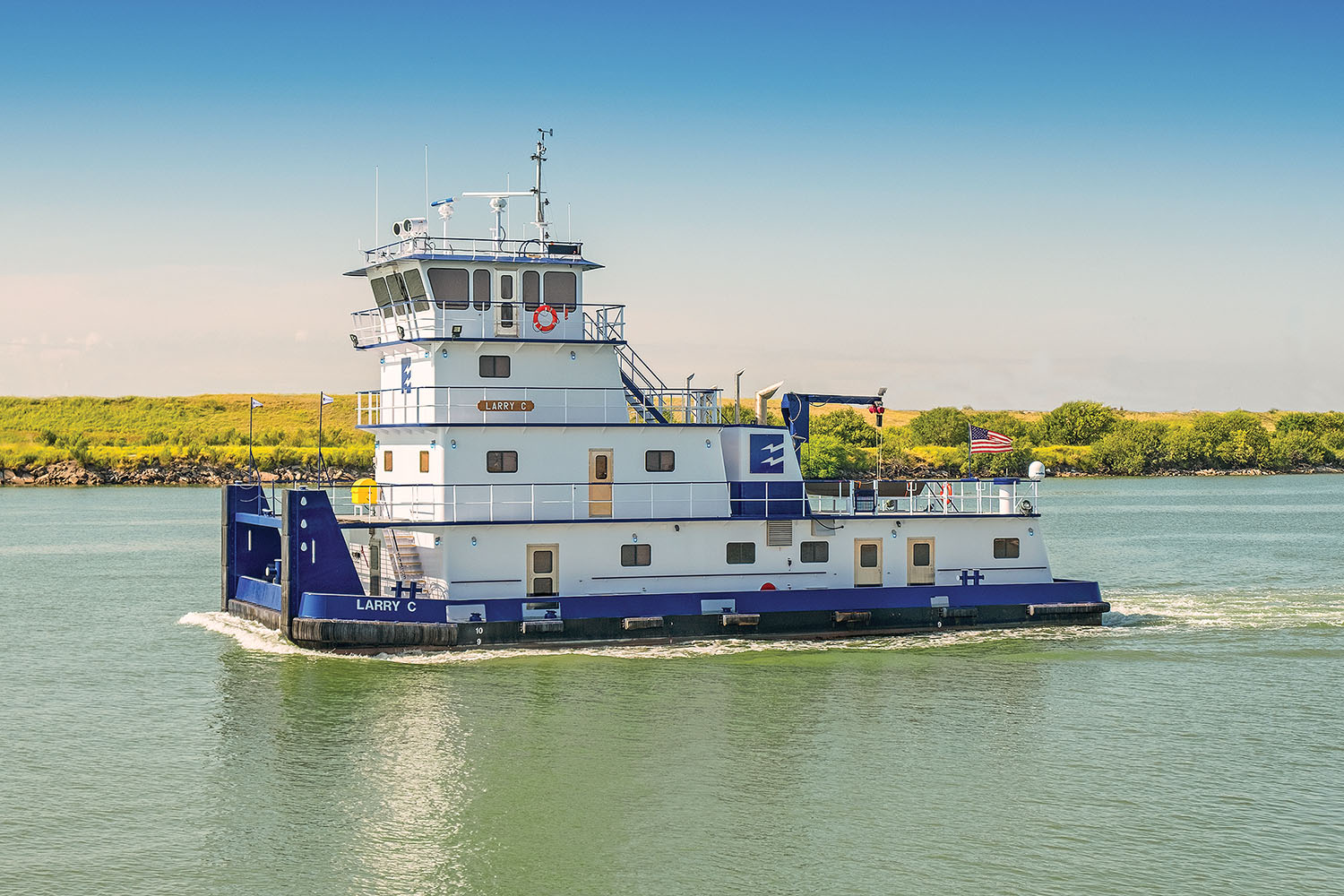 The mv. Larry C, a 84- by 32- by 11-foot, twin screw towboat with a wheelhouse eye level of 34 feet, is the latest vessel built at John Bludworth Shipyard in Corpus Christi, Texas, and designed by John Bludworth III. When carrying its full capacity of just over 38,000 gallons of fuel and 14,000 gallons of potable water, the boat drafts 8 feet, 6 inches. Raise the mast and it has an air draft of 49 feet, 6 inches. Lowered, it’s 41 feet.

The Larry C’s well-furnished deck house has four staterooms with a total of six berths—two single berths and two double berths. Enterprise Marine Service’s stylized Electric “E” is displayed throughout, from the settee in the pilothouse to the island serving station in the galley and the paneling in the lounge. The lounge area features a 60-inch flat-screen TV, a sound bar and DVD player, along with satellite television. Berths are also equipped with satellite TV.

The galley is equipped with an ice maker, trash compactor, oven and stove, as well as a full refrigerator and full freezer. A second freezer is located in the utility area. Accommodations also include two full baths and one half bath, as well as a hidden toilet in the pilothouse, all connected to a Seahorse MSD unit from Sabine Universal Products. The deck house is protected from engineroom noise and the outside environment by vibration dampening and thermal insulating coatings provided by Mascoat. The Larry C also features 3-inch-thick mineral wool insulation, including a sound barrier panel, from S&J Insulation.

The wheelhouse, designed to give the pilot optimum visibility and comfort while at the helm, is equipped with the latest navigation and communication equipment from Premium Electronics as well as alarms and monitoring systems from Rio Controls & Hydraulics.

The mv. Larry C is named for Larry Casey, longtime friend and business partner of Dan Duncan, who founded both Enterprise Products and Duncan Energy. Casey worked as national sales director for Pure Oil Company in Chicago prior to moving to Houston in the early 1970s to join Duncan’s company for about a year. Then, in 1974, Casey founded Xcel Products Company. Xcel went on to build the first privately-owned underground storage facility for liquified natural gas and other chemicals. That storage facility, located at Mont Belvieu, Texas, is now part of Enterprise’s holdings.

Casey went on to serve on the board of directors for Enterprise Products, and he was one of the founding board members of Duncan Energy.

Beyond their business partnerships over the years, Casey and Duncan, who died in March 2010, were frequent hunting companions, traveling often on safaris around the world in pursuit of big game.

“They remained very close friends,” Ann Casey, wife of Larry Casey, said. “Their ranches were near each other.”

Ann Casey said Larry Casey was overjoyed when he heard the new boat would bear his name.

“He was very excited,” she said. “It was really a great honor.”

Some information contributed by Frank McCormack.