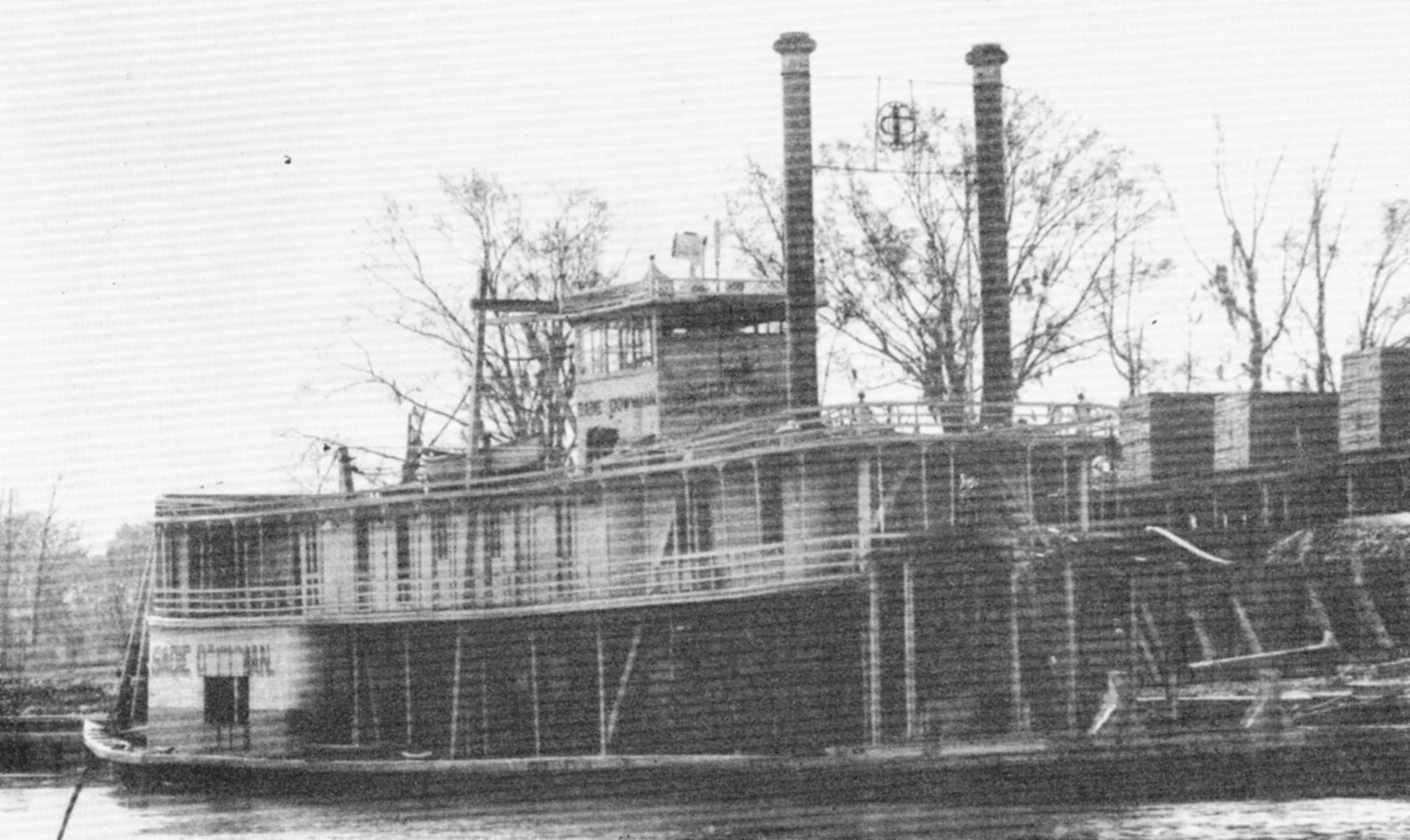 The Sadie Downman, which was typical of the small towboats that ran on southern rivers, was built in 1899.

Records show that the steamboat was first inspected at Morgan City, La. Constructed on a wooden hull measuring 110 feet in length by 24 feet in width, it had a depth of only three feet. The sternwheeler’s original name was Joseph A. Breaux. The second inspection was conducted at New Iberia on January 27, 1900. By the time of the third inspection in early 1901, the vessel’s name had been changed to Sadie Downman.

The riverboat was owned by the New Iberia Lumber Company. Records also indicate that, until 1906, the boat was classified as “inland passenger” (86 tons), but upon conclusion of the 1907 inspection, done at New Iberia on March 11, the classification was changed to “inland towing.” The Downman could be legally operated with a crew of three persons.

The Downman seldom ventured beyond Bayou Teche and its neighboring waterways, leading a rather routine existence. The steamboat inspectors noted only one accident involving the Downman. On January 22, 1910, while crossing Six Mile Lake with a load of slabwood, the boat sprang a leak, floated four miles and sank in five feet of water at the end of Cypress Pass Island. Damage was minimal and the vessel was quickly raised and repaired. However, the owners of the towboat requested an investigation by the inspectors at New Orleans. As a result of their findings, the licenses of Capt. J.P.T. Roberts (master of the boat), August Gounder (chief engineer) and Phil Kraemer (assistant engineer) were suspended for a period not exceeding 30 days. The inspectors concluded that the men were guilty of negligence and inattention to duty.

On the same day that the Sadie Downman sank, a similar bayou towboat, the Anton Wilbert, caught fire (allegedly from a lantern) while tied up at Franklin, La., and burned to the waterline. The Wilbert, like the Downman, was owned by a Louisiana lumber company and was small in size, being 91.3 feet in length by 21 feet in width. The Wilbert was rebuilt in 1913 at Houma with Capt. Alex Chotin in command and Charles Gouner the chief engineer. While making its first trip following the rebuilding, the riverboat capsized on Village Bayou, with the crew members narrowly escaping. The sternwheeler ultimately burned at Bayou Plaquemine in the autumn of 1923 and sank; the wreck blocked the bayou until it was cleared.

A special cruise on October 14 commemorated the 104th birthday of the steamer Belle of Louisville. The riverboat was launched at Pittsburgh in 1914 by the James Rees & Sons firm. Originally named Idlewild, it first operated as a day packet and ferry at Memphis. Converted to an excursion vessel, the name was changed to Avalon in 1948 and its whistle and calliope were heard on many rivers.

Tied up in 1961 and narrowly escaping the scrapyard, the stalwart sternwheeler became the Belle of Louisville in 1962.

Caption for photo: The towboat Sadie Downman at a landing. (Keith Norrington collection)