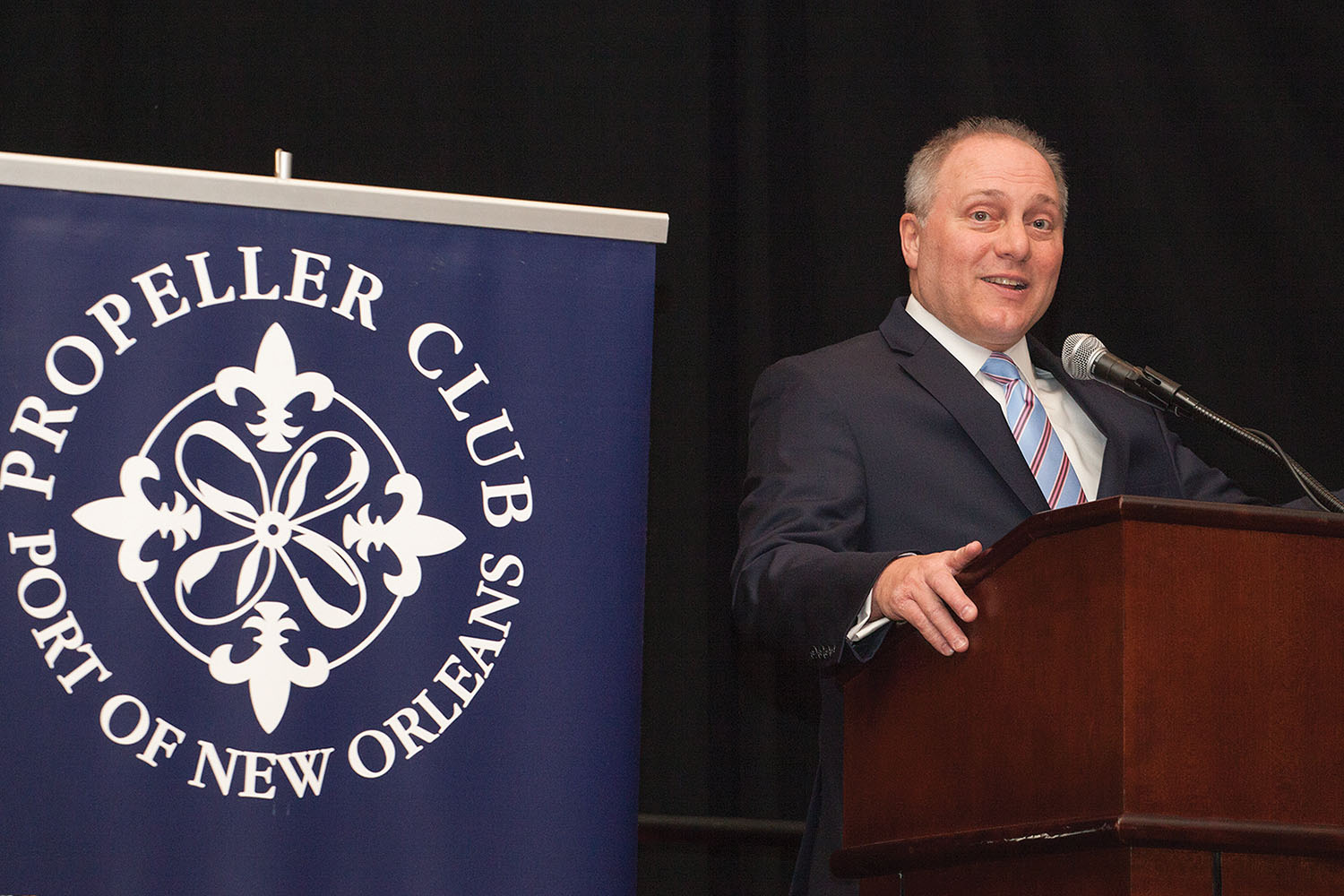 The New Orleans Propeller Club’s annual Maritime Person of the Year Gala is always a lively collection of industry leaders gathered to celebrate the life and career of one of their peers. But the 2018 gala, held October 30, also drew a strong lineup of elected officials from legislative and executive branches of government.

The energetic crowd was gathered to celebrate House Majority Whip Steve Scalise, the 60th recipient of the club’s annual award. Scalise, who represents Louisiana’s first congressional district, which includes portions of parishes on both sides of Lake Pontchartrain, is up for re-election November 6.

Scalise has been at the forefront of legislative efforts important to the maritime industry, including biennial passage of the Water Resources Development Act (WRDA), the Tax Cuts and Jobs Act of 2017, funding for the U.S. Army Corps of Engineers and the Harbor Maintenance Trust Fund, and regulatory issues like vessel incidental discharges.

But before all that, Scalise is well loved by his peers and constituents, and that fondness was on display at the Propeller Club’s gala in his honor.

“No person, of course, deserves this any more from the Port of New Orleans than our very own Congressman Steve Scalise, the 60th recipient of this prestigious award,” said Michael Nation, first vice president of the New Orleans Propeller Club and the compliance and operations manager at Harbor Towing & Fleeting LLC.

“You’ve heard already the name of the 2017 recipient,” Barkeding said, addressing the crowd. “Let me tell you, the selection committee did a helluva better job this year than they did last year.”

Louisiana Lt. Gov. Billy Nungesser was on hand to congratulate Scalise, and he thanked the congressman for maintaining a close connection to his home community.

“I used to ask him, ‘Steve, do you still put up your own Christmas lights?’” Nungesser said. “I used to ask him that because, a lot of times, when our elected officials go to Washington they change their number, they barely know you, and they forget where they came from.”

Not so with Scalise, Nungesser said.

“Since the first day he was elected to Congress and with all the great achievements he’s made, he’s still ‘Steve’ to us,” he added.

Bob Livingston, who represented Louisiana’s first congressional district from 1977 to 1999, touched on the June 14, 2017, shooting that almost proved fatal for Scalise. On that day, Scalise and other members of Congress were practicing ahead of the annual Congressional Baseball Game when James Hodgkinson, a left-wing activist, opened fire. Scalise was shot in the hip and suffered fractured bones, injury to internal organs and internal bleeding.

“Steve Scalise was saved by the heroic response from Capitol policemen David Bailey and Crystal Griner,” Livingston said. “He fought for his life and returned for Congress, inspiring the nation with his resilience and his optimism. Throughout his recovery, he’s been moved by the outpouring of prayer and support he’s received from the American people, particularly from Louisiana, but also from leaders around the world.”

Bailey, who was present at the gala as part of Scalise’s security detail, received a standing ovation from the crowd.

In welcoming Scalise to the podium, Sean Duffy, ex officio for the Propeller Club and executive director of the Big River Coalition, echoed Livingston.

“I remember a very somber morning last year when my wife called me to tell me about an incident in Washington and that my friend had been shot,” Duffy said. “This state was praying for you. We depend on you. So when it was time for this award to come out, there really was only one choice.”

Addressing the crowd, Scalise was fast to spotlight the significance of the maritime industry not only to Louisiana but also to the entire country.

“The Port of New Orleans and the things that move through our waterways in Louisiana—this industry represents over 50,000 jobs to the State of Louisiana,” Scalise said. “Those are direct jobs, and we’re talking $11 billion-plus of economic activity. So this is a major industry for our state, and it’s also critically important to our country.”

Scalise then touched on issues related to the maritime industry with which he’s involved. First, he emphasized the importance of the Jones Act.

“Every country in the world has some kind of cabotage laws,” he said. “What it means to the United States is, No. 1, national security.”

Scalise compared it to aviation laws, which prevent foreign airlines from flying between domestic airports.

“We don’t allow that to happen because it’s a real concern about our national security,” he said. “We want to know who the people are who are moving people around this country. On the same token, that’s why the Jones Act is so important, to have that set of rules for America, so we know who’s moving goods throughout the inland waterways in this country.”

Scalise then touched on the recently-passed WRDA bill and the Energy and Water Appropriations bill of 2019, which included language for a 10 percent boost in how much money will flow into the Harbor Maintenance Trust Fund. Scalise also voiced support for deepening the Mississippi River Ship Channel to 50 feet and for continued upgrades to the nation’s waterways. Waterway issues are bipartisan issues, Scalise said, as he praised Rep. Cedric Richmond from Louisiana’s second congressional district as both a friend and colleague in the House.

“Cedric Richmond and I have worked incredibly well together on all of these issues that are important to South Louisiana,” Scalise said. “Sometimes you don’t always have all of your Republican colleagues with you, and when you need Democrat help, I can call Cedric on any of these issues. He’s always right there to help.”

Scalise thanked Col. Michael Clancy, commander of the New Orleans Engineer District, for the Corps’ partnership on issues. He reiterated his commitment to “not only reform the way the Corps works but also make sure they’re adequately funded.”

Looking back over the past year, he praised the Tax Cuts and Jobs Act of 2017 and the impact that legislation has had on businesses, both small and large, and everyday workers. Locally, Scalise has highlighted two Louisiana businesses that have benefitted from the tax bill. Gnarly Barley is a small brewery on the north shore of Lake Pontchartrain that was able to begin offering health coverage and set up a 401(k) thanks to the bill, Scalise said. The other is Blessey Marine Services, led by Walter Blessey.

“He put over a million and a half dollars, within weeks of when the bill was signed into law, invested into his workers—higher pay, higher training, better career opportunities,” Scalise said. “That’s what the American Dream is all about.”

“We just got an agreement, and within probably the next three weeks the Senate is going to vote, on an agreement to fix that vessel discharge issue,” he said.

Scalise, while accepting the award, reflected praise back on the maritime community and vowed to continue representing it and the entire first congressional district of Louisiana.

“Continue to lean on us, because what you mean to our country and to our economy is so critically important,” Scalise said in closing. “It’s fun to fight on your behalf. Many times it’s bipartisan. Every now and then it’s not, but that’s OK, because we’ll continue putting those coalitions together. We’ll continue to make sure this industry thrives and to keep our country moving. That’s what you do and that’s why it’s an honor to get the Propeller Club’s award.”