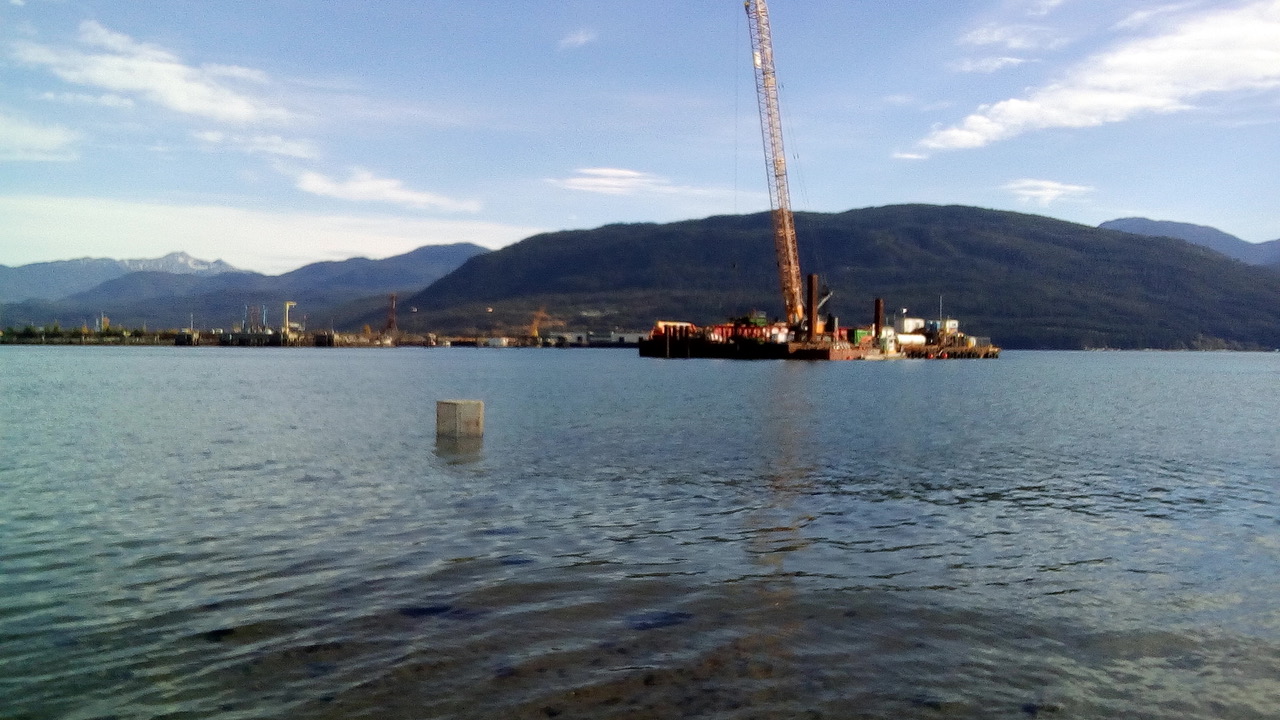 In July, Boskalis began using the SediMeter™ by Lindorm Inc. of Miami on two separate projects. The sediment monitoring system has been deployed at Kitimat, British Columbia, Canada, at an LNG terminal construction project and with the City of Amsterdam on a land reclamation project, to monitor sediment conditions during dredging. Boskalis purchased the equipment from Lindorm earlier this year.

Four SM4 model SediMeters are used at each project – three monitoring in the work area and one outside the work area for comparison data – to monitor sedimentation and turbidity in nearby eelgrass beds. The system provides real-time data, using the company’s existing data loggers and radios.

To create new land for the City of Amsterdam, Boskalis is moving sand from navigation channels for a new neighborhood in IJmeer. The SediMeter will detect any elevated turbidity and sedimentation outside of the silt screen. In September, Dr. Ulf Erlingsson, CEO of Lindorm Inc., visited the project site.

With real-time data, contractors can better monitor the effects of dredging. “If something happens that suddenly increases the sedimentation, you can take action to remedy the problem,” Erlingsson said. The fourth generation SediMeter includes the original sensor technology with 36 near infrared optical backscatter detectors, spaced 1 centimeter apart. Older models of the sensor only monitored for sedimentation levels at the bottom. The newest model now also monitors turbidity levels with nephelometric turbidimeters, which give much better accuracy at the low turbidity levels of the sea, Erlingsson said.

“When doing dredging, beach nourishment, or land reclamation, it is almost inevitable to cause some sediment spill in nearby water. Suspended sediment may harm the environment in two ways, both while being in the water column, which is measured with a turbidimeter, and when setting on the bottom. This latter process is what the SediMeter measures, thus giving data in real-time that enables the project to take action before causing permanent harm, in case of an unintended spill,” Erlingsson said. While analyzing data from Amsterdam, Erlingsson said that sedimentation on the bottom and high suspended sediment concentration in the water are not always well correlated. Therefore, it is important to measure both.

In Kitimat, B.C., at the $40 billion liquified natural gas (LNG) project, a few different deployment methods were used. In the area, lots of logs in the water and grizzly bears on the shoreline make it a tough environment for the instruments. Originally, to protect them, Boskalis deployed the sensors in a cages. Though it protected the equipment, the cages also acted as sediment traps. Lifting the cage to allow for free flow underneath helped the issue, but Boskalis sought another method for deployment.
Erlingsson recommended putting the equipment below the tidal zone, out of the way of logs and grizzlies, but diving is virtually impossible in this remote area of Canada. As another solution, a platform was developed to lower the equipment from above. The system took baseline data beginning in July and as of late October, dredging on the project was about to begin.

On the project in The Netherlands, Boskalis deployed the same equipment using a more typical method – mounted to the seafloor with a standard earth anchor. The holding tube is made of polycarbonate plastic. The SM4 model has a 15-millimeter diameter level sensor that goes into the holder tube, and a 20-millimeter diameter turbidimeter region that stays free of the holder tube. It is powered by a size AA 900 mAh rechargeable Lithium battery with solder tabs, located in a separate compartment.

Two turbidity sensors, one ISO style with NIR light, and one EPA style with white light, are both reflected 90 degrees. A fluorescence meter emits UV light and measures the returned white light, and UV LEDs protect the window of the turbidimeters against fouling.

The system also has a 3D accelerometer for measuring tilt and vibrations. Every measurement stores 30 measurements at 8-bit resolution as default, but it can also measure with 12-bit resolution. The SediMeter SM4 has a built-in memory that holds 32,786 measurements. The time interval between measurements is between 1 second to 24 hours, although the recommended minimum is 3 seconds.

The system can also be used in real-time monitoring, alone or in a network. When used in stand-alone mode it is powered by a built-in battery that is recharged through the same USB cable used to set up the instrument and to download data.
Erlingsson said in the future, he will offer additional training and consultation with the equipment. The projects with

He invented the instrument in the 1980s, as a Ph.D. student. In 2006, Erlingsson began developing it as a commercial product in Miami. He thinks the equipment could also be important for monitoring coral reefs during beach renourishment and deepening projects.