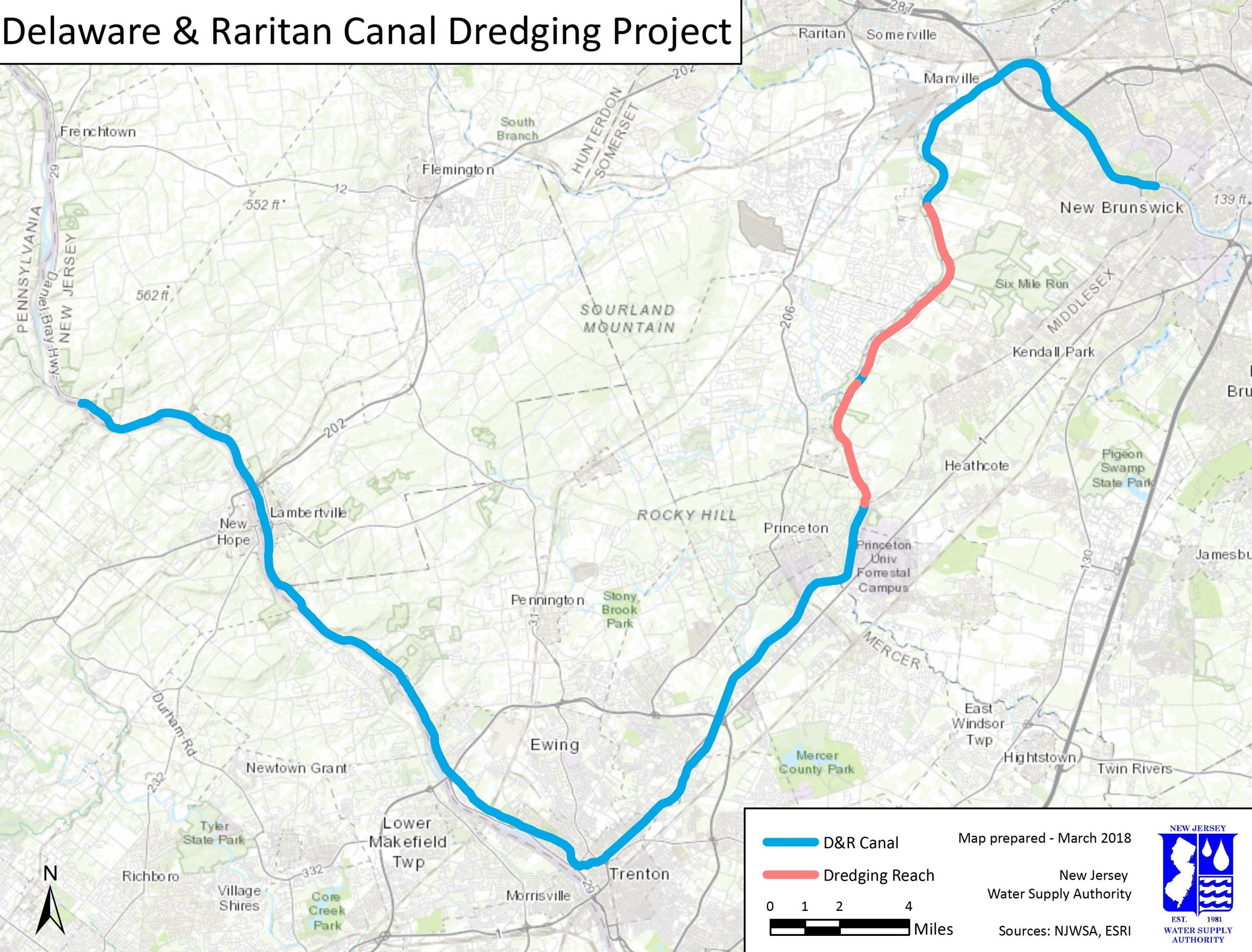 The New Jersey Water Supply Authority (NJWSA) is undertaking a dredging project in the Delaware and Raritan Canal to restore water supply functionality to the historic waterway. In December of 2017, NJWSA contracted with J.F. Brennan of La Crosse, Wisconsin, to remove 248,000 cubic yards of maintenance material from a 10.5-mile stretch of the 60+ mile canal in areas with 1 to 6 feet of siltation. Brennan began the three-year project in July.

NJWSA has retained Urban Dredging Consultants, JV (UDC JV), a joint venture between Anchor QEA and O’Brien & Gere Engineers since 2010, to plan and design the project and obtain the necessary permits.

“The historic nature of the waterway required a team that brought technical skills while also being sensitive to the needs of the local communities,” said Marc Brooks, chief engineer of NJWSA.

The project is located between Kingston and East Millstone, New Jersey. The area contains sensitive wildlife species and is considered a historical and recreational treasure. A five-year-long planning and permitting process, headed by Anchor QEA’s Ram Mohan, engineer of record, resulted in a plan for a three-year dredging and dewatering project in six distinct project segments of the canal, with a dredging window of July 1 to October 31. Project timing restrictions will protect diadromous fish species, the Indiana Bat, and turtle species, including the wood turtle (Glyptemys insculpta), which reside in the vicinity of the canal.

Project permitting required coordination with multiple regulatory agencies, canal stakeholders and local environmental groups, and outreach to the community. Multiple public meetings were held at various stages of design and planning to solicit feedback on the project.
“The design capacity of the canal is 100 million gallons of water per day, and the dredging project will restore the canal to its design capacity”, said Sharmila Rahman, project engineer for the NJWSA.

UDC JV evaluated several dredging technologies and determined that hydraulic dredging, with pipeline transport and dewatering using geotextile tubes in a staging area was the preferred method. J.F. Brennan began mobilizing in March of this year, building access sites and staging areas, and launching the dredges Ashtabula River, Fox River and Palm Beach. These are eight-inch DSC swinging ladder dredges, chosen in part for their ability to dredge without damaging the clay liner on the bottom of the canal, which was hand laid by the builders, along with hand-cut stone revetments on both sides of the canal.

The original configuration of the canal was eight feet deep, and the current dredging project targets restoration of 7 feet of water.
Material is pumped to an 8-acre dewatering pad adjacent to Reach 2 near the beginning of the project, in a field owned by the NJWSA. To create a gentle slope for the pad, 33,000 cubic yards of soil and bedrock were moved.
“We used 3D terrain modeling during bidding and operational planning to arrive at the layout,” said William Simons, Brennan senior project manager.

Dewatering Operation
Infrastructure Alternatives (IAI) of Rockford, Michigan, placed geotextile tubes on the pad, and set up the piping and manifolds used for filling.

Each tube holds 2,000 cubic yards of material, with dimensions between 240 and 300 feet long and 7 feet high when filled. The tubes are stacked as the project progresses, to a maximum of three layers. Drinking water-safe polymers are added as the material enters the tubes and elutriate water drains into two one-million-gallon constructed settling basins, then pumped a quarter mile back into the canal.

The dredged material consists of varying mixtures of sands, gravels, silts and clays, which required flexibility by J.F. Brennan to manage pumping operations throughout dredging. Dewatering is estimated to take two weeks to two months.

“After dredging is finished at the end of October, we will start gearing up to process the material,” Simons said. An Allu cement mixer and pneumatic power feeder (built in Finland) mounted on Brennan’s Sennebogen material handler will be used to mix the dewatered sediment with Portland cement. “The cement will help dry out the material and gives the finer material more strength” when used to reclaim a brownfield site, Simons said.

The processed dredged material will be taken to a nearby brownfield site for beneficial reuse as part of the site closure plan. UDC and NJWSA worked closely with the beneficial reuse placement area throughout project planning.

“Bench scale testing and engineering evaluations determined that Portland cement additions, ranging from 2 percent to 8 percent, depending on material consistency was required to attain the desired strength and workability properties,” UDC JV Project Manager and Construction Manager Travis Merritts of Anchor QEA said. A camera mounted on a pole is taking time lapse photos of the tube filling, dewatering and mixing operations.

Processing the Material
Once the dredged material is dewatered in the staging and processing area, Brennan’s site work contractor DA Collins of Wilton, New York, will haul the amended material to the American Cyanamid Superfund site, where it will be used to raise the grade of the site in preparation for engineered cap placement or other site closure needs.

“We estimate that amended sediment load out will entail the loading of about 3,500 triaxle dump truck loads per season using clamshell buckets mounted on two CAT 336 excavators,” Simons said.
“DA Collins will restore the dewatering pad area to the grassy field it was at the beginning of the project. The ecological restoration company Cardno of West Olive, Michigan, will plant saplings and trees to leave the park nicer than we found it,” he said. Dredging for 2019 will begin on July 1 with two dredges.

The project is staffed by both Brennan crew and local union operating engineers from IUOE Local 825.
“The operators and union leadership of Local 825 have been very helpful in conducting operations to date and helping management identify suppliers and resolve the numerous challenges we have

The project is popular with the local people. “Walkers and joggers will stop to ask questions about the dredge and the project. If people see our Brennan shirts in restaurants, they will come over and ask if we’re with the dredging project,” he said.

Travis Merritts and Fabricio Yumiguano of Anchor QEA are the construction managers for the project. Merritts gave a technical presentation on this project at the 2018 Western Dredging Association Summit and Expo entitled “Alternatives Analysis, Engineering Design and Construction Planning for a 10.5-mile, Inland Drinking Water Canal: Delaware and Raritan Canal, New Jersey,” which presented details of the engineering and construction aspects of the project. His co-authors were Ram Mohan and Walter Dinicola of Anchor QEA, Trevor Staniec and Lowell Kachalsky of O’Brien & Gere, and William Simons of J.F. Brennan.

ing freight between Philadelphia and New York. Terminuses in Bordentown and Brunswick connected the waterway to the Delaware and Raritan Rivers, respectively.

Today, the canal is a 60+-mile-long linear state park with boating, fishing, wildlife viewing, walking and bicycle trails. The canal itself serves as a drinking water reservoir managed by the NJSWA, serving 1.5 million residents.

Once completed in 2020, the project dredging will be a good case study for beneficial use of maintenance dredged material in New Jersey.