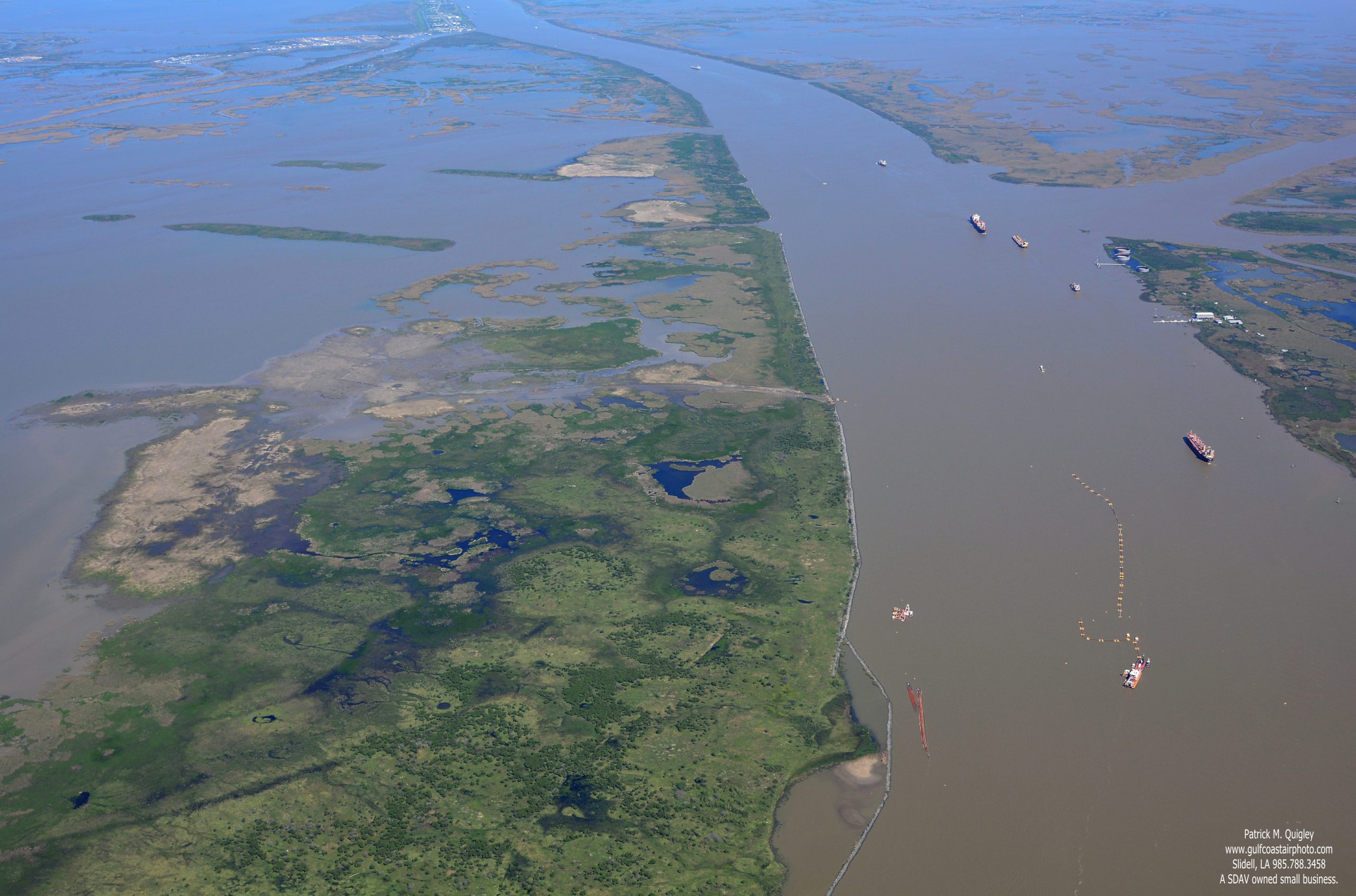 There are 6,800 acres of new marshland bordering the Passes of the Mississippi River – land that was created starting in 2011 by a coalition intent on stopping the loss of land in Louisiana at a rate once described as “a football field every hour.”

The Mississippi River advocacy group Big River Coalition (BRC) has been working with the Corps and industry leaders to begin to reverse this trend in the birdfoot delta at the mouth of the river. The new marshland was created in the delta through beneficial use of maintenance dredged material.
An ongoing project at Head of Passes will create another 1,000 acres by the end of this year.

This success is the result of a decade-long effort by the organization, which advocates and facilitates the use of material dredged from the navigation channel to reclaim the land surrounding the Passes – land that has eroded to open water in recent decades.

Sean Duffy, BRC executive director, explained that in 2011 the Corps of Engineers began requiring the Mississippi River to “live within its budget”, which had been running a $20 million defecit. For many years the Corps funded the Mississippi River operations with funds often intended for other projects. The Corps must also abide by the Federal Standard that requires it to use the most economically responsible options available.

In the Southwest Pass on the Lower Mississippi River, the Corps had relied on hopper dredges for channel maintenance, which would offload in the Hopper Dredge Disposal Area at the Head of Passes or in an EPA-approved placement site the Ocean Disposal site offshore.
Using cutterhead dredges would enable pumping this material, which amounts to tens of millions of cubic yards per year, over the dikes next to the Passes to reclaim the marshland that had been lost.

River Shipping
The Mississippi River Ship Channel (Baton Rouge to the Gulf of Mexico) is the busiest shipping channel in the U.S., with four of the top 11 U.S. ports located in this reach. An average of approximately 6,000 ships a year enter and depart the channel through Southwest Pass. In 2017 that number was over 7,500 ships moving 500 million tons of cargo.

The navigation channel is authorized at 45 feet deep and 750 feet wide in this reach to provide two-way traffic. Constrained federal funding often leaves USACE unable to maintain full project dimensions (width and depth). Swift currents, frequent river bends and ship operating characteristics make safe navigation a challenge for the Bar Pilots tasked with bringing ships in and out of Southwest Pass to and from the open Gulf of Mexico. The pilotage in the extreme lower river is the responsibility of three groups – the Associated Branch Pilots, Crescent River Port Pilots’ Association and for U.S. flagged vessels the Federal Pilots and Docking Masters.

Exploring Cutterhead Dredges
The industry, which includes shippers, river pilots, dredging companies, communities and other navigation stakeholders, joined together an effort to make sure the Corps New Orleans District (MVN) and Mississippi Valley Division (MVD) were adequately funded and able to dredge the channel to its authorized depth, at the same time advocating using the material – as much as 20 million cubic yards in some years – to restore the lost lands in the delta.

A core group of directors formed the Big River Coalition in 2011, and chose Sean Duffy, a New Orleans native who previously worked for the Gulf States Maritime Association, to head the new group, which now numbers over 100 direct members, with new members joining constantly.
“I was happy to direct the coalition with the support of the members and the board of directors, he said.

The BRC supported the broadly bipartisan navigation interest group Restore America’s Maritime Promise (RAMP), which was formed in 2007 to see that the Harbor Maintenance Tax was used for its intended purpose – maintenance of federal navigation channels. This was one of the provisions of the Water Resources Reform and Development Act of 2014, (WRRDA) which the BRC supported. WRRDA 2014 was passed by wide margins in both the House and Senate.

“Sediment Recycling”
The Coalition joined the New Orleans District and Mississippi Valley Division (MVD) in overcoming other objections to cutterhead dredge use and began to use and promote the phrase “sediment recycling” to highlight the benefits of placing dredged sediment along the coast and channel edges rather than in offshore placement sites.

The Corps had had success in 2009 with a test of a cutterhead dredge in Southwest Pass.
The Bar Pilots had legitimate concerns because cutterhead dredges were anchored in place and not easily maneuverable, and the pilots saw them as a hazard to navigation. However, they agreed to a one-time test.

In 2009, the cutterhead dredge E.W. Ellefsen performed a channel maintenance contract in Southwest Pass, pumping the material across the foreshore rocks along the Pass and creating 46 new acres of land. The pilots and the dredge had excellent coordination on dredge location and safe ship passing arrangements. After the project was completed, the pilots learned through channel surveys that the cutterhead dredge had created more consistent channel dimensions than the hopper dredges had. The pilots also appreciated the buffer provided by the increased acreage, and they now view increased beneficial use of dredged material as an important method of protecting the channel by fortifying it against the encroachment of open water.

Cutterheads Now Accepted
In 2014, cutterhead dredges were used in two channel maintenance contracts in Southwest Pass for the first time in the same fiscal year. This trend has continued, and the number of acres of new land created each year since 2009 has increased. In 2015 a sediment recycling record was achieved, with 20.9 million cubic yards of material used to create approximately 1,000 new acres in the Bird’s Foot Delta. In 2017, approximately 20.7 million cubic yards of material was used to create about 1,476 acres of marsh on both sides of the Southwest Pass channel.

Material from all channel maintenance dredging except for approximately five million cubic yards in the extreme lower part of the river is now used for restoration. Material in the Hopper Dredge Disposal area at Head of Passes is regularly removed by cutterhead dredge and placed in the reclamation areas – in either the Delta National Wildlife Refuge or the Pass a Loutre Wildlife Management Area on the east side or in the West Bay Receiving Area on the west side of the river.

In late October, Weeks Marine will dredge 12 million cubic yards from the Hopper Dredge Disposal Area into the West Bay Receiving Area to create an additional thousand acres of land.

Hopper Dredge Pumpout Study
In 2007, the MVN had issued a report on its study of the use of hopper dredge pumpout for beneficial placement of material, to replace placement in the offshore sites. But the cost of the pump-out equipment and pipeline as well as the cycle times of the dredge connecting to the pump-out station, emptying the hopper and returning to dredging was greater than the cost of transporting the material to the offshore sites. In keeping with the Federal Standard, the Corps needed a financial commitment from the Louisiana Office of Coastal Management for the incremental cost difference over the normal dredging operations. Corps and State discussions did not lead to an agreement on funding for the pump-out’s additional cost, and the result was the continued use of the offshore sites by hopper dredges, described in an MVN report entitled Mississippi River Southwest Pass Hopper Dredge Pump-Out Review.

Beneficial Use Elevation Increased
The BRC used the support of the subcommittee, along with members of the Western Regional Dredging Team, to increase the maximum elevation for dredged material placement in the Mississippi River Delta.

The beneficial use elevation threshold had been set at 4.5 feet Mean Low Gulf, but in 2015 was increased to 4.5 feet North American Vertical Datum of 1988 — a vertical increase of 3.5 feet. This adjustment corrected for the extreme subsidence in the Mississippi River Delta. The previous target placement elevation of + 4.5 feet Mean Low Gulf was determined to be 3.5 feet lower than originally thought. This increase also allows additional quantities to be placed in areas adjacent to the channel for subsequent distribution by tides and storm events.

The MVN continues to host monthly stakeholder meetings at which river flows, dredging requirements, the Operations and Maintenance budget status, and dredging plans are discussed in an open forum. This meeting is often highlighted as exemplary ‘partnering’ by dredging contractors and navigation interests in regional and national meetings.

Environmental Benefits
The beneficial use of dredged sediment on the Mississippi River Ship Channel (MRSC) has restored habitat for a wide range of wildlife and fisheries. The wetlands created from this program provide higher elevation land ideal for nesting birds and mammals with a gentle slope toward tidal mudflats and submerged sand bars that provide excellent foraging habitat for wading birds and fish. The delta is an important wintering ground for approximately one million migratory waterfowl and several hundred thousand shorebirds and wading birds. These birds flock to these newly restored wetlands for the submerged aquatic vegetation, aquatic invertebrates and other food resources these new habitats provide.

The birdfoot delta is positioned between the freshwaters of the Mississippi River and the deep marine high salinity waters of the Gulf of Mexico, creating a rich environment for diverse wildlife.

The diverse range of maturity of habitats combined with the varying salinity regimes provides habitat for an impressive assemblage of species. The fringing marsh and barrier islands that have been restored provide estuarine habitat for juvenile and larval marine species, while the interior fresh marsh provides habitat for many common freshwater species.

Wetlands restored with sediment from the Mississippi River Ship Channel are consistent with the goals of the 2017 Louisiana Comprehensive Master Plan for a Sustainable Coast, the North American Waterfowl Management Plan through the Gulf Coast Joint Venture Mississippi River Coastal Wetland Initiate Area, and the Louisiana Department of Wildlife and Fisheries Wildlife Management Plan. The restored wetlands provide habitats that benefit 49 species identified as Species of Greatest Conservation Need identified in the 2015 Louisiana Wildlife Plan which includes the federally listed Piping Plover and Red Knot.

Many of these wetlands are located on public properties within Delta National Wildlife Refuge and Pass a Loutre State Wildlife Management Area, which are open to public visitation and enjoyment. Each year more than 30,000 people visit these areas for hunting, fishing, camping, and nature observation. Many of the wetlands they visit are those created with dredged material from the Lower Mississippi River.
The BRC has an annual meeting in New Orleans attended by most of the members.

“There are times when we don’t all agree, but we can come to the table and express our ideas, and often come to a compromise,” said Duffy who estimates that he attends over 100 meetings a year representing the group and giving presentations on the group’s activities and achievements.
A report on the BRC’s efforts and success in creating and restoring the lands in the birdfoot delta was submitted to the Western Dredging Association Environmental Committee for consideration in the 2018 Environmental Award competition. Contributors to the report were BRC members American Association of Port Authorities (Jim Walker), Associated Branch Pilots of the Port of New Orleans (Captain Michael Miller), Big River Coalition (Sean Duffy), Crescent River Port Pilots Association (Captain Michael Bopp), Federal Pilots and Docking Masters of Louisiana (Captain Greg Bush), Great Lakes Dredge & Dock Company (Steve Auernhamer and Bill Hanson), Manson Construction Company (Henry Schorr), Louisiana Department of Natural Resources (Greg Ducote and Jeff Harris), National Oceanic and Atmospheric Administration (Tim Osborn), Weeks Marine (Chuck Broussard), United States Army Corps of Engineers (Ed Creef, Michelle Kornick and Joaquin Mujica) and the United States Fish and Wildlife Service (Barret Fortier and James Harris).