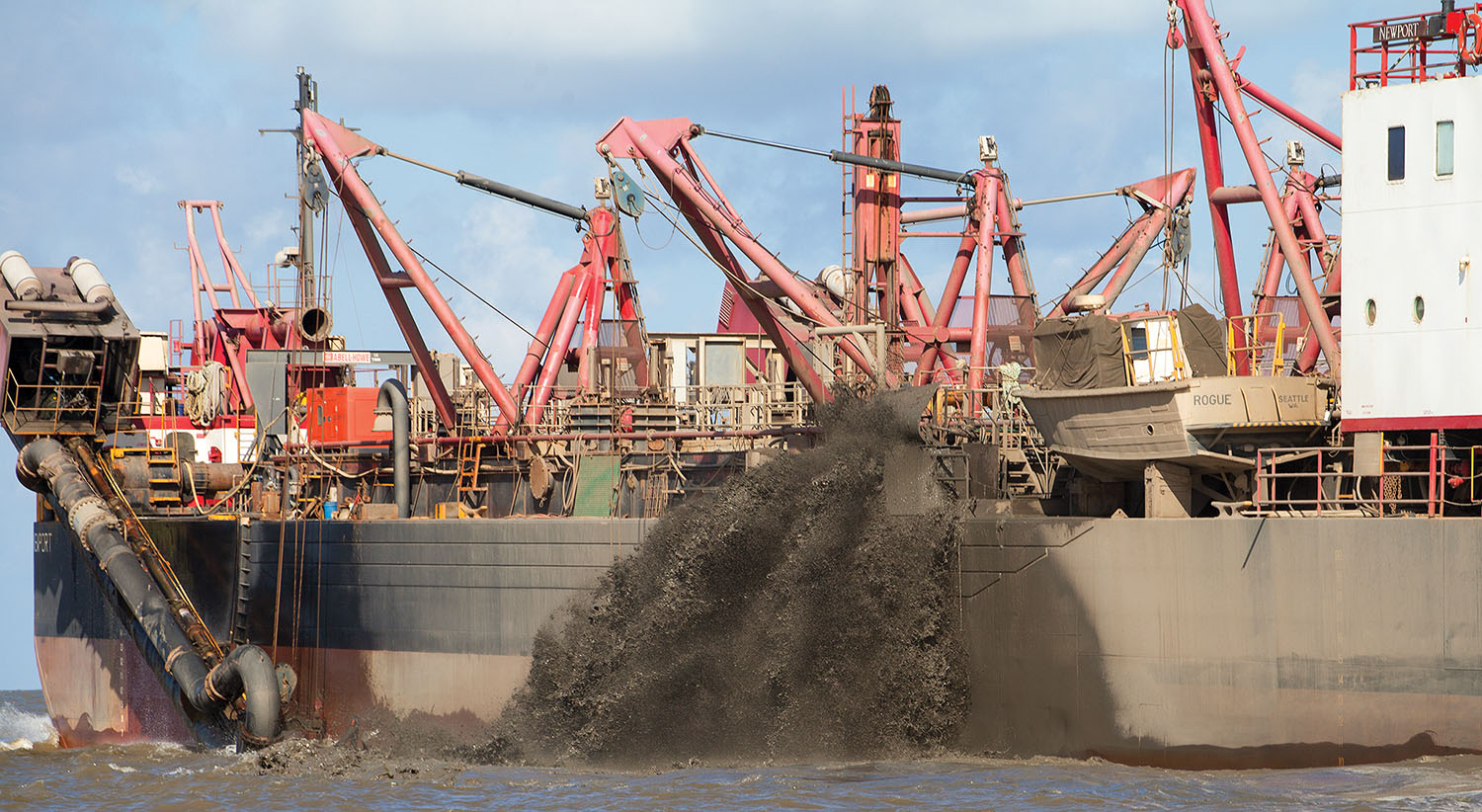 The U.S. Army Corps of Engineers on October 30 awarded a single award task order contract to Alaska-based Brice Civil Constructors Inc. to dredge the last 12 miles of the Atchafalaya River Bar Channel south of the Port of Morgan City. The announcement marks a significant milestone for the port, which has long sought a way to combat the fluid mud, also called “fluff,” which collects in the outermost portion of the channel and drastically restricts navigation.

Brice, a subsidiary of Calista Corporation, is purchasing components to assemble a dredge plant that will be built and designed especially for the Atchafalaya River Bar Channel. The plant will feature a single drag arm—like on a trailing suction hopper dredge—mounted onto an offshore support vessel (OSV). Instead of capturing the sediment, like a traditional hopper dredge would do, the new plant will agitate the fluff, suspending it in order to reach a water density adequate for navigation. The dredge plant will be assembled at Halimar Shipyard in Morgan City.

Brice expects to spend about 150 days gathering the dredge components and assembling and testing the plant prior to putting it to work in the bar channel.

“We look forward to joining your community and working with the U.S. Army Corps of Engineers and the Port of Morgan City to successfully complete this project,” Brice Civil Constructors President Jon McVay said in a statement.

Raymond “Mac” Wade, executive director of the Port of Morgan City, said he anticipates the new agitation plant to be at work in the bar channel by around April, with the width and depth of the channel restored in large part by the summer.

“This is going to give us a 24/7 channel in the bar channel,” Wade said. “I think by next summer we’re going to have a channel.”

The contract is worth $21.8 million and is expected to last around three years, depending on severity of the fluff over time, Wade said.

Wade also noted that the Corps has recently awarded a contract to dredge the upper portion of the channel, between Crew Boat Cut and Eugene Island. Manson was awarded that contract, which Wade said totals about $16 million and calls for a cutterhead dredge to work for 150 days. Wade said at present, the bar channel is as narrow as 200 feet wide and, in the lower part where the fluff is, as shallow as 12 or 13 feet, depending on the tide. But with Brice and Manson soon to be operating on the bar channel, Wade was confident the channel will be returned to its authorized dimensions of 20 feet deep and 400 feet wide very soon.

“The combination of these two operations will provide a reliable, consistent, 20-foot-deep by 400-foot-wide channel,” Wade said.

And that restoration of the bar channel should significantly boost the number and size of vessels calling on the Port of Morgan City.

Just over four years ago, Morgan City was celebrating success in importing and exporting goods. In August 2014, Purina Mills International had begun importing salt and exporting grains through the port. But due to the fluff, which rapidly accumulates in the bar channel, it was virtually impossible to maintain the bar channel’s 20-foot depth for oceangoing vessels. Traditional dredging in that portion of the bar channel proved too expensive and ineffective.

By the summer of 2016, the Port of Morgan City and the Corps of Engineers partnered on a demo project in the bar channel to see if simple agitation could keep the fluff suspended enough to maintain navigation. Between June and August of 2016, Manson’s hopper dredge Newport crisscrossed the bar channel, suctioning the fluff-filled water and pumping it immediately back overboard—simple agitation. The test worked. In the portion of the bar channel studied in the demo project, the depth went from around nine and a half feet to 18 or 19 feet. The Corps released a draft report later that year indicating that “agitation dredging and sediment conditioning is the dredging protocol most likely to achieve a year round navigable 20-foot deep bar channel within the available funding.”

In the time since the demo, engineers at the Corps’ Engineer Research and Development Center, the University of Texas A&M and with Brice have all studied the issue and identified agitation dredging as the probable solution to maintaining the last 12 miles of the bar channel.

Wade said the much-anticipated contract and agitation system has the Port of Morgan City full of hope.

“Finally we have hope, and there hasn’t been hope in a long time,” he said.

Caption for photo: Demonstration project in 2016 proved that agitating the material in the channel would provide enough depth to maintain navigation. (Photo by Frank McCormack)