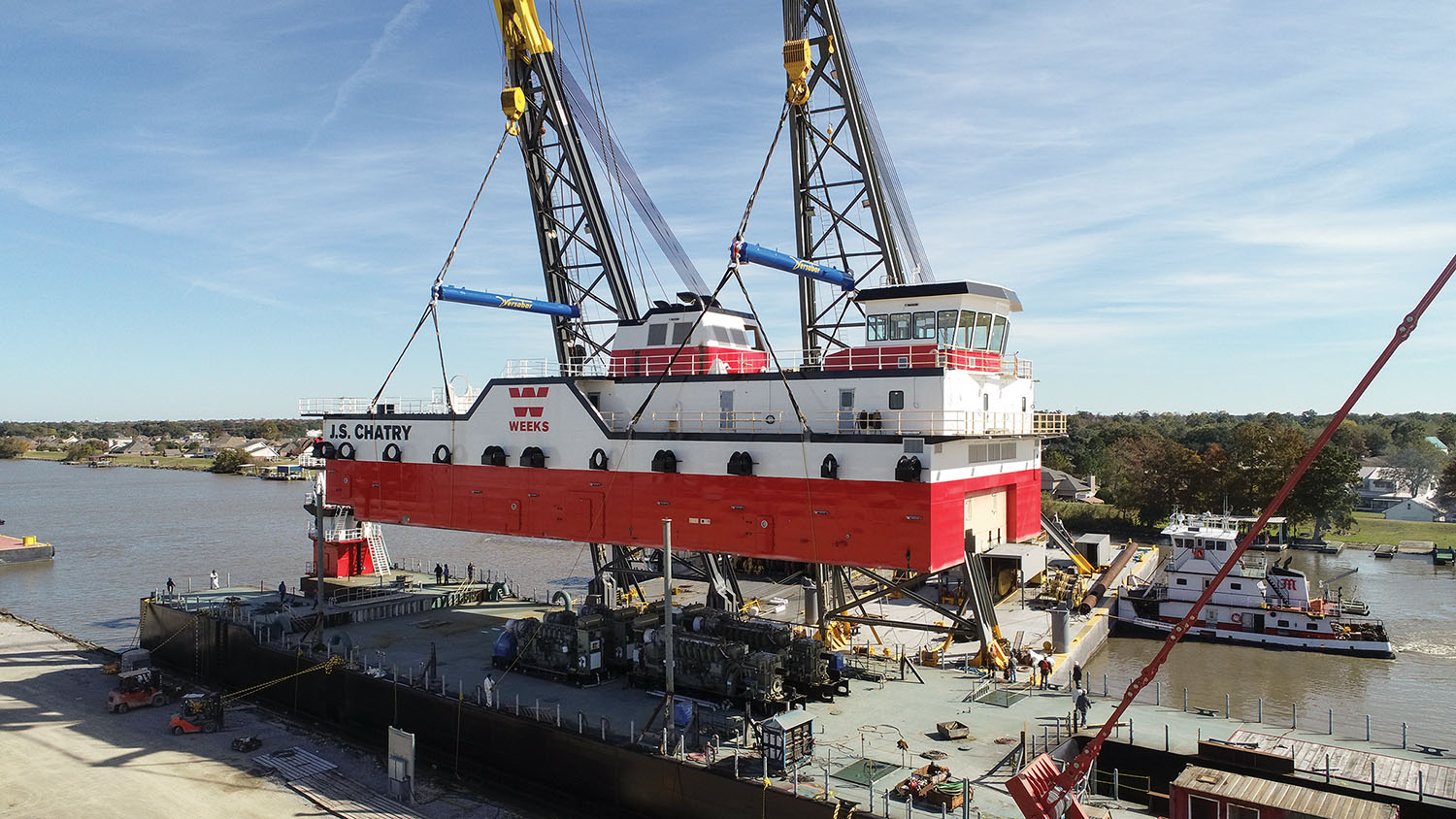 With the superstructure transported to one of C&C’s floating drydocks on the Algiers Canal portion of the Gulf Intracoastal Waterway, operators aboard the McKinney derrick barges Lily Ann and Troy McKinney rigged the cranes and began the heavy lift effort shortly after 10 a.m. C&C’s mv. Mr. C and McKinney’s mv. Sarah Paige were on hand to assist.

The McKinney team lifted the superstructure, then shifted it just to the east on the canal, positioning it directly over the vessel’s hull. With the help of a crew on the deck of the hull, the McKinney crane operators lowered the superstructure into place. The entire operation was complete in less than two hours, with multiple celebratory horn blows echoing down the canal at about noon.

Weeks Marine announced the forthcoming 30-inch hydraulic cutter suction dredge in July of 2017. The dredge is named for J. Stephen Chatry, senior vice president and manager of Week’s dredging division. Once complete, the dredge JS Chatry will measure 310 feet by 72 feet. Dredge pumps are powered by GE Tier IV diesel electric engines. The vessel will boast a total installed horsepower of 23,269, with 3,000 hp. on the cutterhead. The JS Chatry is equipped to work both offshore and inshore, with a walking spud carriage for operating in inlets and protected waters. The vessel has accommodations for a crew of 52.

The dredge JS Chatry is the sixth newly-constructed dredge for Weeks since the company announced in 2011 a $200 million-plus capital investment initiative. That build program grew from five new dredges to six, with the sixth being the JS Chatry. That program also included the 8,500-cubic-yard hopper dredge Magdalen, which was launched in 2017, and the CR McCaskill in 2012. Weeks’ new-build program has come in response to the growing coastal restoration and protection market.

C&C Marine & Repair covers more than 80 acres adjacent to the Algiers Canal, with more than 3,200 linear feet of continuous frontage on the canal and more than 470,000 square feet under roof. The shipyard offers new construction and repair services and recently opened a new, fully enclosed and automated barge blast and repair facility. The shipyard has built three triple-screw Z-drive inland towboats for Marquette Transportation Company, which are among the significant boats of 2018 recognized at this year’s International Workboat Show.