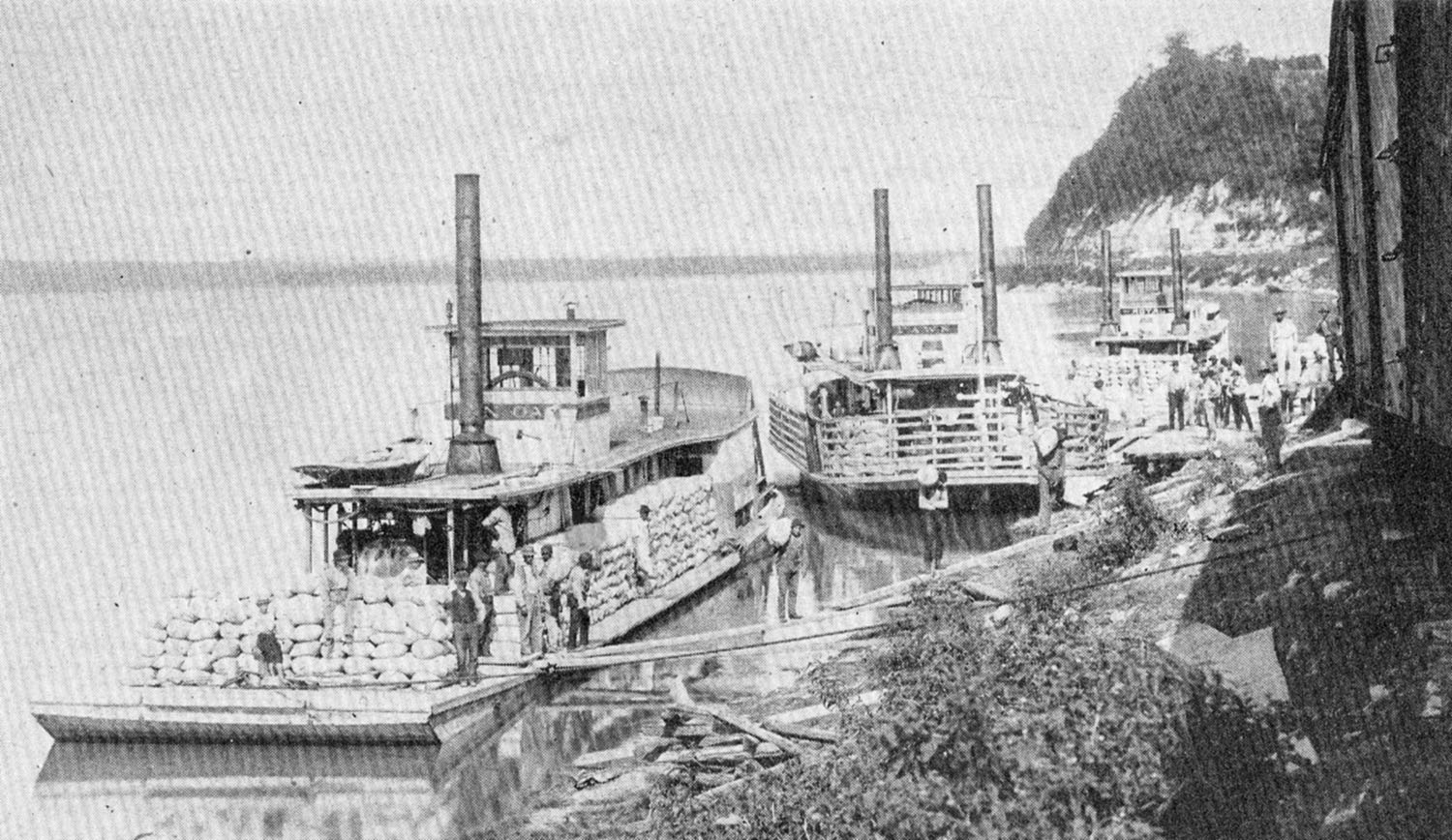 This week, the Old Boat Column journeys up the Missouri River to the historic river town of Hermann. This scene shows a typical day along the waterfront during the days when the Hermann Ferry & Packet Company was operating in conjunction with the Missouri Pacific Railroad.

At the wharf are the packets Pin Oak and Royal, which largely operated on the Gasconade River. In the middle is the Fawn, which was the ferry boat for Hermann.

The Pin Oak was constructed at Hermann in 1888 on a wooden hull measuring 95 feet in length by 17.5 feet in width, with a depth of 2.2 feet. One boiler supplied steam to engines having 8-inch cylinders with a stroke of 2.5 feet. The sternwheeler was owned by the Hermann Ferry & Packet Company. It was sold in 1896 to Archie Bryan and E.W. Wild, with Capt. Billie Wild serving as master.

The Pin Oak turned over and sank in Sandy Hook Bend on July 29, 1896, near Wyss Landing. A large replica of the riverboat’s pilothouse is exhibited in the River Room of the former German School building (312 Schiller St.), which houses the town museum at Hermann. Also displayed are boat models, photographs, boat-building tools and other riverboat relics.

The Royal was built at Hermann by the Wohlt brothers in 1884, to run in opposition to boats of the Hermann Ferry & Packet Company; after a year the Wohlts again joined the firm. This sternwheeler had a wooden hull that was 86.6 feet in length by 24 feet in width.

It was later owned by the Heckmann family (well known on the Missouri); Capt. William Lewis Heckmann Sr. once took the vessel all the way up the Gasconade to Arlington, Mo. (near Rolla), the highest a steamboat ever went on that stream. The usual trips made by the boat were to Vienna, Mo., then considered the head of navigation.

The Royal was eventually sold south to new owners.

Like the two packets, the Fawn was also built at the Hermann wharf. It was constructed in 1880 by noted boat builder Charlie Stanford. The wooden hull measured 91.9 feet in length by 19.1 feet in width. Sheet iron was installed on the vessel’s bow as a protection from ice.

Eventually sold, the sternwheeler sank at St. Charles, Mo., near the wrecks of the ferry boat J.P. Gage and another abandoned steamboat.

The final event for the museum’s 60th anniversary year, the annual Christmas Open House will be held on Sunday, December 9, from 1–4 pm.

The 22-room 1894 Richardsonian-Romanesque mansion, largely constructed by shipyard employees, will be decorated for the holiday season. Refreshments will be served and the gift shop will be open, offering river and regional history books, as well as other steamboaty stocking stuffers. Santa will be on deck (1-3:00) to chat with children of all ages.

The museum is located at 1101 E. Market St. (overlooking the Ohio River opposite the former Jeffboat shipyard) in Jeffersonville, Ind. Further information is available by visiting the museum website at www.HowardSteamboatMuseum.org.