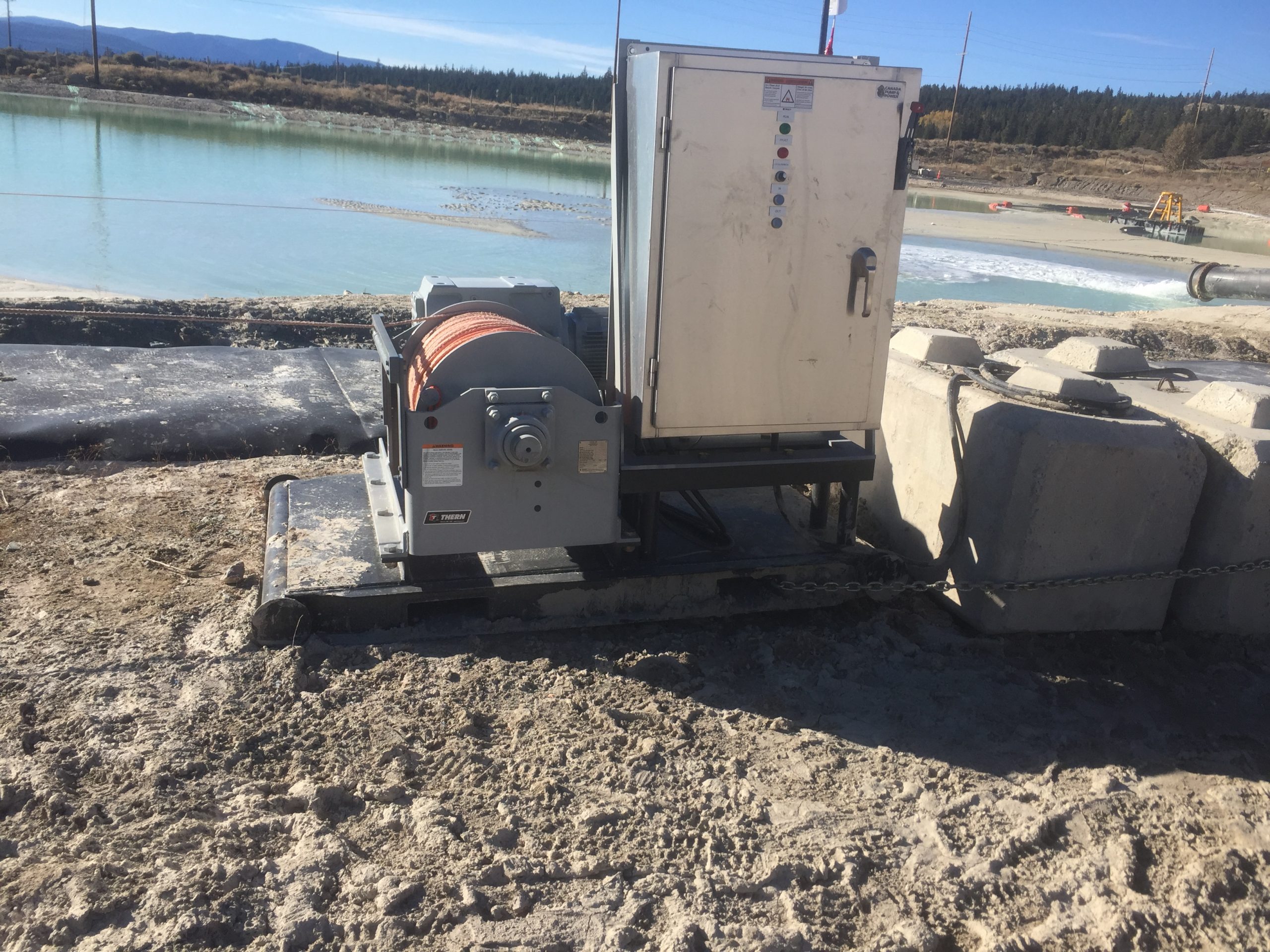 In 2015, Canada Pump and Power developed two patents for an autonomous dredging system. Since 2017, the Mighty Dredge has been at work on four projects in settling, cooling and tailings ponds, where the dredge can maneuver unmanned on projects 24-hours a day.

Jeremy Leonard, chief executive officer of Canada Pump and Power, founded the company in 2010. He began in the dredging industry long before that, first founding Northern Underwater System in 1979, which did industrial marine services, namely dive, pump, barge, dredge equipment and operations. In 2006, Leonard started Pacific Pump and Power Ltd., based in Hawaii, doing similar work.

Leonard said Canada Pump and Power Ltd. started in 2010 to focus on developing innovative pumping and dredging equipment. The company still performs more traditional dredging work, but Mighty Pumps Corp. was established in 2011, focused on the production of the Mighty Dredge, Mighty Pumps and Mighty Barges. The company started with barges, then pumps and now dredges. Technology growth in artificial intelligence, GPS and sensors has made automation possible for this equipment, Leonard said.

“The dredge pump moves around underwater with a computer guiding three or more winches from shore or on floating barges on the surface to determine where the dredge cage is positioned and what direction it is moving in,” Leonard said, of the first patent and dredging method. “This enables the dredge cage to move around the pond without requiring a vessel of any kind on the surface.” An operator is not needed on-site to control the dredge; the

computer can identify where the Mighty Dredge is in 3D and move it as required.

“The Mighty Dredge is smart enough to stop if it hits an obstacle and go around it,” Leonard said.

The autonomous dredge can also remove material at a more consistent pace and longer than traditional operations. The winches take turns pulling and releasing to move the dredge a small amount at a time in unison, Leonard said. This allows the dredge to cut into new material without a recovery cycle, and the slurry mixture remains consistent without cycling water between digging cycles.

“If the dredge does run into a problem, it just stops and emails or calls to let the responsible party know that the dredge is awaiting instructions,” Leonard said.

The second patent details how the system controls its pumping rate for certain sediment conditions.

“The dredge pump measures the density of material in the volute by monitoring the amperage draw or power output on the drive system,” Leonard said.

For each project, the system is programmed to achieve a specific mixture of water and material, whatever is required to be pumped effectively to the discharge site. Because the computer can identify the density of the material in the volute in real-time, it can slow down or speed up the winches to cause the dredge to draw in more water and decrease the density of the slurry or draw in more solids to increase density.

The system can dredge in any pattern, but Leonard said the company prefers to dredge in a spiral pattern, like a snail shell. “That way the dredge head is always digging into fresh material,” he said. “In a standard tailings pond configuration, the dredge might be dropping the pond by a meter (or less) in depth on each pass, so the pond bottom would lower by one meter, in this case, as the dredge moves from the center of the spiral to the perimeter of the pond, and then drop by another meter as the dredge spirals back into the center of the pond on the reverse path.” The dredge is digging the entire time. It can also be programmed to dig from any point in the pond or leave portions of the pond with underwater structures untouched.

The propulsion of the dredge cage is based on three or more winches. Leonard said the operations so far have typically used four. The number determines how close to shore the dredge can cut a particular pattern, like a square or circle.

“We can vary the area being covered by lengthening the winch cables. To date, we have used cables up to 450 meters long (1,500 feet), but there is no technological reason why we could not cover a larger area,” Leonard said. The engineering team can provide a standard dredge package, or custom fit a dredge for a particular application.

The Mighty Dredges in operation currently use DragFlow pumps, but the system can operate with any pump that has special metals for corrosive applications; different types of impellers; and different speeds, sizes and horsepower. The current operations and off-the-shelf packages use 4-, 6- and 12-inch DragFlow pumps. If pumping distance is required, the system can incorporate booster pumps.

The dredge pumps often use an agitator in front of the volute to mix the material directly from the pump. “The company also provides water jetting rings and auger-style cutting heads to dig material more aggressively when required,” Leonard said.

The Mighty Dredge does need regular service, but most parts in the system have longer service intervals than conventional dredges, Leonard said. Most of the pumps need service about every 240 hours (10 days of continuous operation). The winches can draw the dredge back to shore or barge for service. “If the dredge cannot continue to operate as requested by the computer, it is programmed to stop and email, message or call a responsible party,” Leonard said. With an internet connection and password, anyone can monitor the system. “We typically do not have someone monitoring the system all the time. It will notify us if it needs anything,” he said.

Canada Pump and Power was contracted to operate the Mighty Dredge at four projects in Canada.

At Kearl Lake, CPP will use a 4-inch Mighty Dredge to do settling pond cleaning work for Exxon, starting in March 2019. “We are waiting for the ponds to unfreeze because that is more cost effective than unfreezing them with other means,” Leonard said.

In September 2018, CPP used a 4-inch Mighty Dredge on a 14-day project to remove material buildups in front of an intake pump house at Suncor cooling ponds in Northern Alberta, Canada. In November 2016, it dredged a tailings pond on-site, removing fly ash fines with an 8-inch Mighty Dredge.

For Syncrude, CPP will dredge at Mildred Lake, starting in March 2019. The settling pond project will take less than four weeks, but the pond is a disposal pond, so the work may become a long-term project.

In October 2018, the 8-inch Mighty Dredge went to work for Teck Resources at its High Valley Cooper Operations, a copper and molybdenum operation, near Kamloops, British Columbia. Leonard said the ponds have high acidity and “slimes” that are difficult to move with conventional equipment. The project ran until December 2018 and will start up again in spring 2019.